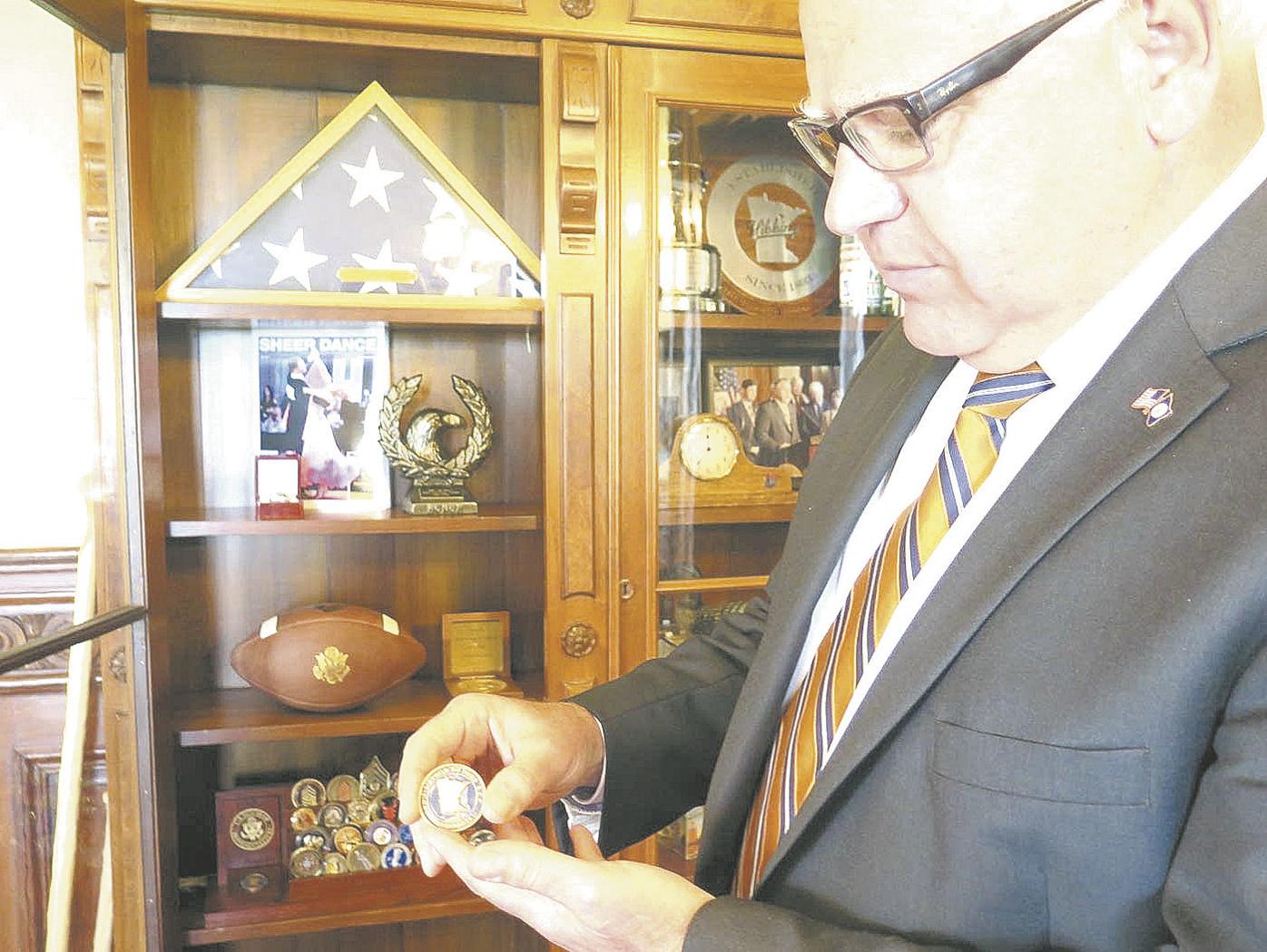 Gov. Tim Walz shows off a challenge coin he had made to mark his time as governor on Aug. 8. He’s been giving them out since earlier this summer to people he meets or who come to his office. (Brian Bakst/MPR News) 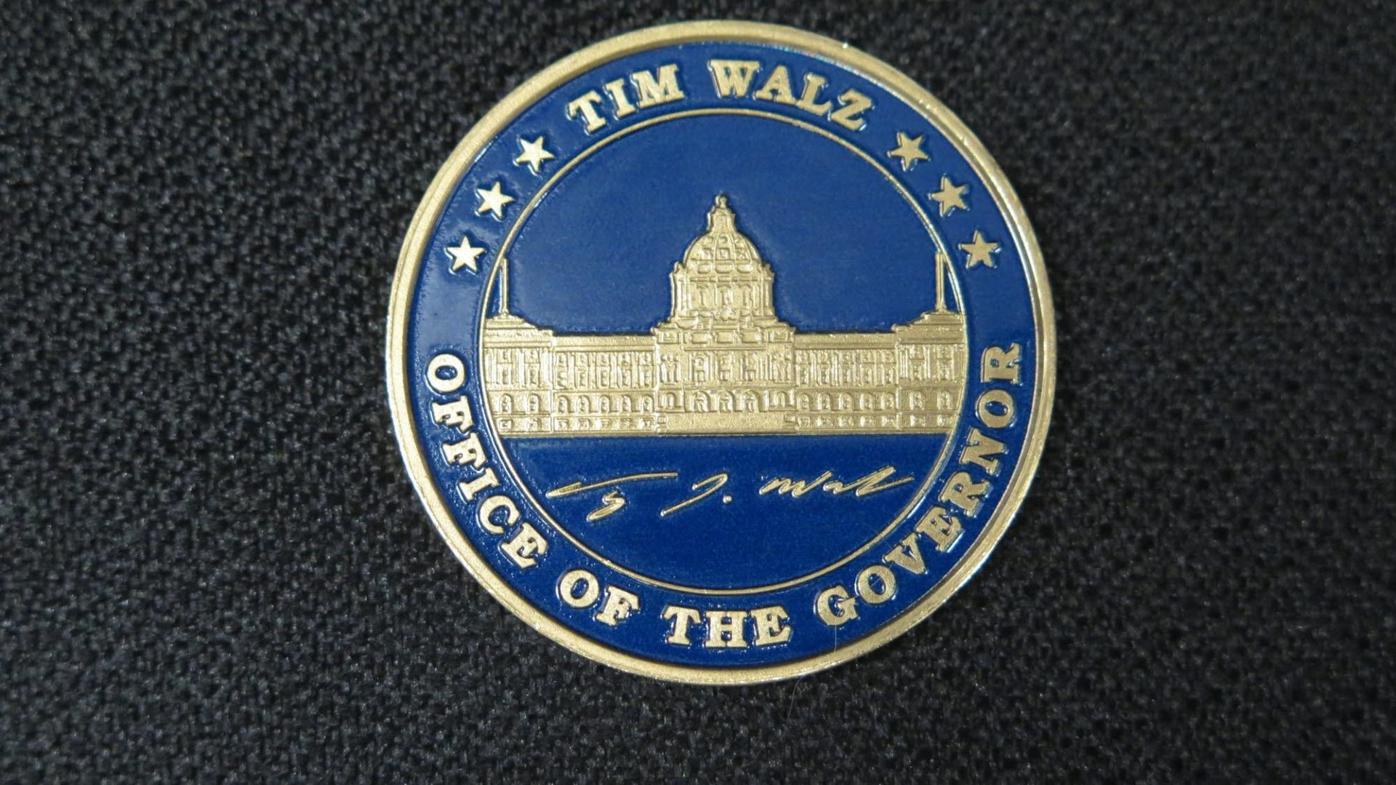 Gov. Tim Walz shows off a challenge coin he had made to mark his time as governor on Aug. 8. He’s been giving them out since earlier this summer to people he meets or who come to his office. (Brian Bakst/MPR News)

If you shake hands with Gov. Tim Walz, don’t be shocked to find something left in your palm.

Lately, the first-year DFL governor has been giving out specialty coins bearing his name, autograph and symbols of Minnesota. They’re called ‘challenge coins’ — a concept that took hold as something of a backslap in the military and grew into a fad in American politics.

Members of Congress carry them. So do governors and presidents.

“Maybe it’s the member of Congress-governor Pokemon collections,” Walz said in a recent interview. “You want to try to get them. They all tell a story.”

Walz began putting his coins into circulation in June.

The other side of Gov. Tim Walz’ challenge coin has the state capitol along with the governor’s signature.

He gives them out at ceremonial bill signings. He left one with a helicopter pilot who flew him on a tour of storm damage. Military veterans whom Walz encounters have an inside track.

One side of the Walz coin is rimmed with his name, some stars and the words “Office of the Governor.” The state’s “L’Etoile Du Nord” motto is on the other.

Walz stresses that his is made by a Hopkins, Minn. company and represents Minnesota, too.

“We’ve got the loon, we got the North Star, we got the woods and, of course, we have the state Capitol,” he said.

So far, he’s gotten some quizzical looks from those who find the coin in their palm.

“One kid asked, ‘What can I buy with it?’” Walz said. “The answer is nothing, actually.”

Minnesota’s bribery laws bar politicians from providing gifts to voters that have more than nominal value. They can supply things such as food and beverages at events as long as the cost amounts to only a few bucks worth. Administrative law judge rulings have determined that parade candy or notepads with a candidate’s name don’t cross the line either.

According to Walz aides, the coins cost less than $4 each. While an official staffer sometimes carries them in his pocket, they’re paid for through his campaign account. The campaign ordered 500 coins in May.

Todd Smrz, an Army veteran from western Wisconsin, got a coin from Walz while at the Minnesota Capitol for a bill ceremony in June.

Smrz was thrilled to get it. He’s familiar with the mementos that are a fixture in the military, where they’re conferred as a gesture of a job well done. He’d never received one from a governor before.

“It is a very high-level coin that you can drop out on the bar,” Smrz said.

As the story goes, when service members or veterans gather in the bar, it’s common for a challenge to be called. Those without a coin or ones from lower-ranking officials buy the drinks.

“It’s kind of a little bit of bragging rights and stuff,” Smrz said. “You’re just showing ‘I’ve been there and seen some stuff.’”

Walz has a vast personal collection of challenge coins he’s received or traded for over the years. He also had one made in his name while in Congress.

Among the several hundred coins Walz possesses are ones shaped like military badges, flags or states. Many are framed on his office wall. The most-treasured ones are locked in a glass cabinet nearby.

He said he got his first while an Army private from a sergeant major pleased with the way Walz carried out a task. More would come throughout his 24-year military career.

The biggest coin Walz has is from a chief-of-staff of the Army. It comes in its own case and weighs about a pound.

The most-unique coin he got at Walter Reed Army Hospital; it’s made out of leftover titanium from a prosthetic limb from a soldier hurt in battle.

President Trump has a coin, but it’s not yet in the Walz collection.

“Yes, I would take one from President Trump. He did not offer it,” Walz said. “And I don’t know if that says more about him or me at this point.”

Minnesota Public Radio News can be heard in Steele County on 103.9 FM or online at MPRnews.org.