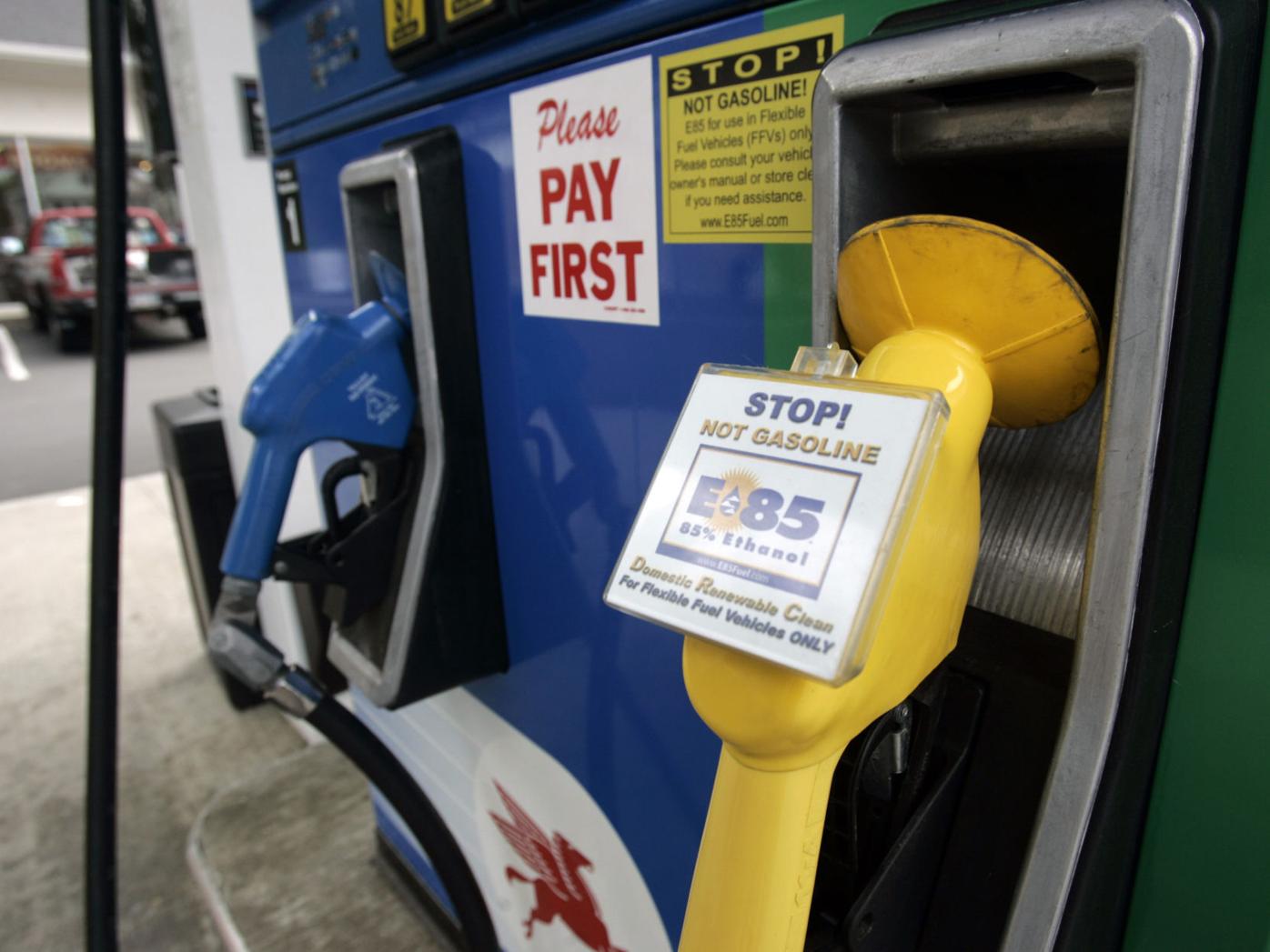 Brian Jennings, CEO of the American Coalition for Ethanol: “Since California enacted the Low Carbon Fuel Standard in 2011, demand for E85 has quadrupled and the state is in the process of allowing E15.” (AP Photo/Mike Groll, File) 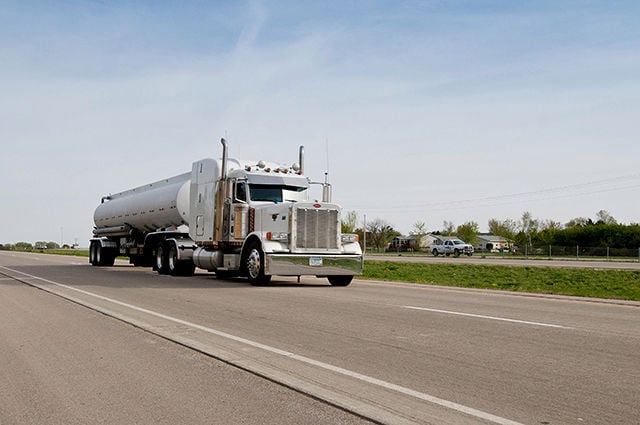 The transportation sector is Minnesota’s largest source of greenhouse gas emissions, emitting slightly more than 40 million tons of carbon in 2018, according to state officials. (Photo courtesy of Minnesota Department of Transportation)

Brian Jennings, CEO of the American Coalition for Ethanol: “Since California enacted the Low Carbon Fuel Standard in 2011, demand for E85 has quadrupled and the state is in the process of allowing E15.” (AP Photo/Mike Groll, File)

The transportation sector is Minnesota’s largest source of greenhouse gas emissions, emitting slightly more than 40 million tons of carbon in 2018, according to state officials. (Photo courtesy of Minnesota Department of Transportation)

Minnesota lawmakers are considering a new policy meant to slash carbon emissions from the transportation sector, the single biggest source of greenhouse gas emissions in the state.

Known nationally as a low-carbon fuel standard and in Minnesota as the “Future Fuels Act,” a version of the legislation has been adopted in California, Washington and Oregon but nowhere outside of the West Coast. It is meant to gradually make transportation fuels cleaner, helping the state meet goals for reducing greenhouse gas emissions in an area that has been difficult to scrub of air pollution that contributes to the climate crisis.

Unlike the Clean Cars regulations — a controversial mandate from Gov. Tim Walz’s administration that requires auto manufacturers provide more electric vehicles for sale in Minnesota — the low-carbon fuel standard is noteworthy for its broader, though not universal, political support. Democrats are widely in favor of it, and some Republicans are open to the concept. It has the backing of pro-EV interest groups, but also ethanol producers who see it as a key policy to sustain corn growers and rural refineries in the biofuels industry.

While the policy didn’t pass the Legislature during its 2021 regular session, it’s likely to be a focus of lawmakers who write environmental policy when they convene again in 2022.

How the fuel standard would work

The fuel standard bill introduced in Minnesota would require a 20 percent reduction in the “aggregate carbon intensity” of transportation fuel supplied to the state by the end of 2035. The intensity measure takes into account more than emissions from a tailpipe. Pollution from electricity generation for EVs, or producing crops for biofuels, is counted, for instance.

The state Department of Commerce would set benchmarks to ensure the carbon intensity from the fuels is dropping steadily before 2035. Tim Sexton, chief sustainability officer at the state Department of Transportation, estimated a low-carbon fuels policy could reduce carbon emissions by more than four million tons per year by 2030.

The transportation sector is Minnesota’s largest source of greenhouse gas emissions, emitting slightly more than 40 million tons of carbon in 2018, according to state officials. The state is not on pace to meet goals for a 30 percent cut in greenhouse gas emissions by 2025 set out in the Next Generation Energy Act passed in 2007.

A comprehensive United Nations report on human-caused climate change released in early August says the globe is probably locked in to warming above dangerous levels most nations have sought to avoid, but even worse extreme heat, drought and severe weather episodes are in store without a quick and drastic reduction in greenhouse gas emissions.

The transportation sector is Minnesota’s largest source of greenhouse gas emissions, emitting slightly more than 40 million tons of carbon in 2018, according to state officials.

Under the low-carbon fuel standard bill, each supplier of fuel — such as ethanol, gasoline, electricity and natural gas — would be assigned a score representing the total “life cycle” greenhouse gas output of their product. The legislation would then set up a cap-and-trade system of “clean fuel credits” that fuel providers would have to buy and trade. Suppliers who meet state pollution benchmarks would earn credits, and those who fail to meet standards would need to buy those credits to make up their deficit. That money could then pay for efforts to advance cleaner fuels.

Some of the details of the program would be filled in by Commerce officials.

The policy was developed over more than two years by the Great Plains Institute, a Minneapolis nonprofit focused on energy use and climate change. The organization says it worked with more than 30 organizations on creating an outline of legislation geared toward midwestern states.

Brendan Jordan, a vice president at GPI who oversees transportation and fuels issues, said the policy is “technology neutral,” meaning it doesn’t mandate or explicitly favor one type of fuel, such as EVs, but instead nudges all fuels to get cleaner over time and rewards those who can meet pollution standards.

Under the low-carbon fuel standard bill, each fuel type or supplier — such as ethanol, gasoline, electric vehicles and natural gas — would be assigned a score representing the total “life cycle” greenhouse gas output of their product.

Focusing on all fuels is helpful, Jordan said, because even if the country shifts to EVs in the next 10 to 15 years, the state needs to reduce carbon emissions from existing fuels in the meantime.

“If all you have is an EV strategy you’re saying ‘that’s fine we’ll just accept all those emissions,’” Jordan said.

Walz’s Clean Cars initiative, adopted by the administration without need for legislative approval, is supported by many Democrats and environmental groups as a way to reduce transportation emissions and boost the EV industry. But it has also drawn fierce opposition from elected Republicans, as well as the oil and biofuels industry, who saw the policy as favorable only to EVs. The low-carbon fuel standard, by contrast, has wider backing.

The measure was sponsored in the House by Rep. Todd Lippert, a Northfield Democrat, and in the Senate by Sen. Dave Senjem, a Republican from Rochester. Ethanol and biodiesel trade groups support the low-carbon fuel standard as well.

In a March letter to lawmakers, Brian Jennings, CEO of the American Coalition for Ethanol, said the legislation can lead to more use of E15 — and even higher blends of ethanol and gasoline. “Since California enacted the Low Carbon Fuel Standard in 2011, demand for E85 has quadrupled and the state is in the process of allowing E15,” Jennings said.

While the climate impact of biofuels is hotly debated, and some researchers argue the fuels increase carbon emissions, ethanol is traditionally considered carbon neutral by the government. Either way, supporters of the Future Fuels policy say it requires biofuels to become cleaner.

The legislation would also “reward farmers” who use climate-friendly practices to reduce carbon intensity of corn ethanol, Jennings said. The ethanol coalition cited research in partnership with the Great Plains Institute saying reducing carbon intensity of transportation fuel 15 percent between 2021 to 2030 would generate about $250 million in economic activity each year for biofuel producers and farmers.

Geoff Cooper, CEO of the Renewable Fuels Association, said in a letter the organization “sees a strong role for biofuels in making the Future Fuels Act a success.” Walz’s Council on Biofuels, convened in 2020 to help boost the industry during a pandemic-induced slump, recommended the Legislature adopt a low-carbon fuel standard.

The policy is also supported by General Motors, EV trade groups, and some environmental organizations like Fresh Energy and the Union of Concerned Scientists.

Lippert, the Northfield Democrat, said biofuels producers “can see themselves in this bill” and can advance innovations in the industry. But the legislation will ultimately “drive electrification in the transportation sector, too,” Lippert said. California, for example, has used money from their program’s credit market to pay for charging infrastructure and EV rebates.

“That’s a key thing we need to do to meet our climate goals and act as quickly as we can with climate change,” he said.

Lippert said he’d prefer a “more aggressive” goal for reducing emissions through a fuels standard, especially in light of the U.N. climate report.

The Future Fuels Act does not have universal backing, however. Several House Republicans were skeptical of the legislation during hearings at the Legislature earlier this year. Rep. Barb Haley, R-Red Wing, said she was worried about the potential for increased gas prices. Oregon reported a reduction of 5.3 million metric tons of greenhouse gases from its low-carbon fuels program between 2016 and 2020, but also reported an estimated increase of 3.71 cents per gallon of E10.

Rep. Eric Lucero, R-Dayton, said he was concerned about leaving key policy details up to state agencies. And Rep. Spencer Igo, R-Grand Rapids, said he worried policies that advance biofuels and EVs would interfere with constituents who enjoy driving older cars or who like to ride four wheelers or snowmobiles.

“Having to buy new motors or new vehicles is not what they want to do,” Igo said. “They want to drive their 1990s F-150s that they can work on in their driveway. And I’m really afraid that a mandate like this policy would take that away from them.”

Peter Wagenius, legislative and political director for the Sierra Club’s North Star chapter, said during a March hearing that biofuels should have only a limited future supplying heavier vehicles with no electric alternatives since they pollute more than electricity right now “and they always will.”

Electric cars are quickly becoming more popular and technology is passing biofuels by, Wagenius said, and there is no need to “bureaucratize” EVs with a complex fuel standard unless it’s aimed largely at paying for charging stations and electric car rebates or incentives. Huge corn crops also pollute water and destroy pollinator habitat and the carbon-emission reductions from biofuels are overstated, Wagenius said.

The Sierra Club was neutral on the bill, however, saying it was better than mandating E15 blends in the state, as some lawmakers have considered.

While the DFL-led House passed the low-carbon fuel standard, it stalled in the Republican-led Senate. Senjem, the Rochester Republican who sponsored the measure, said the policy is “intriguing” and deserves more consideration. But he said senators ran out of time to properly vet it during a busy and complicated legislative session.

Senjem, who chairs the Senate’s Energy and Utilities Finance and Policy Committee, said he plans to give the bill a hearing in the 2022 legislative session, but said the complicated legislation could use some tweaking. Even though he expressed skepticism of credit trading schemes and of clean-fuels mandates more generally, Senjem said his support for biofuels was one reason he was interested. “We represent a lot of agriculture,” Senjem said of Senate Republicans. “If this is good for agriculture it’s probably something that’s going to be attractive to us.”

Walker Orenstein reports on the state Legislature for MinnPost, with a particular focus on covering issues affecting Greater Minnesota.