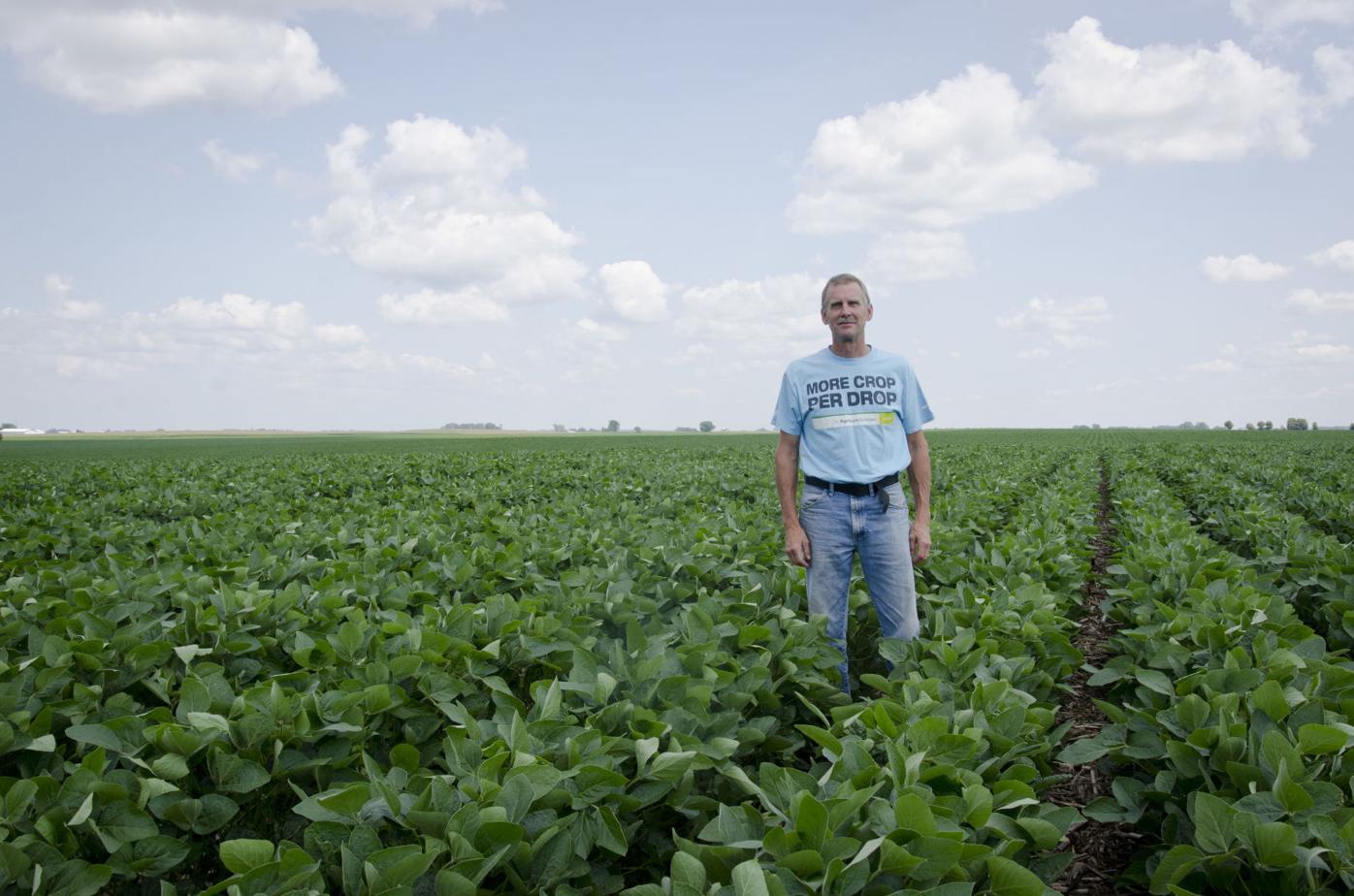 Bob Sommers, a crop farmer southeast of Faribault, reports that soybeans and corn have come along well after the late rains received. While there were some dry conditions while the seeds were germinating, Sommers says overall his area received a lot of the rains parts of the surrounding areas didn’t. (Michelle Vlasak/southernminn.com) 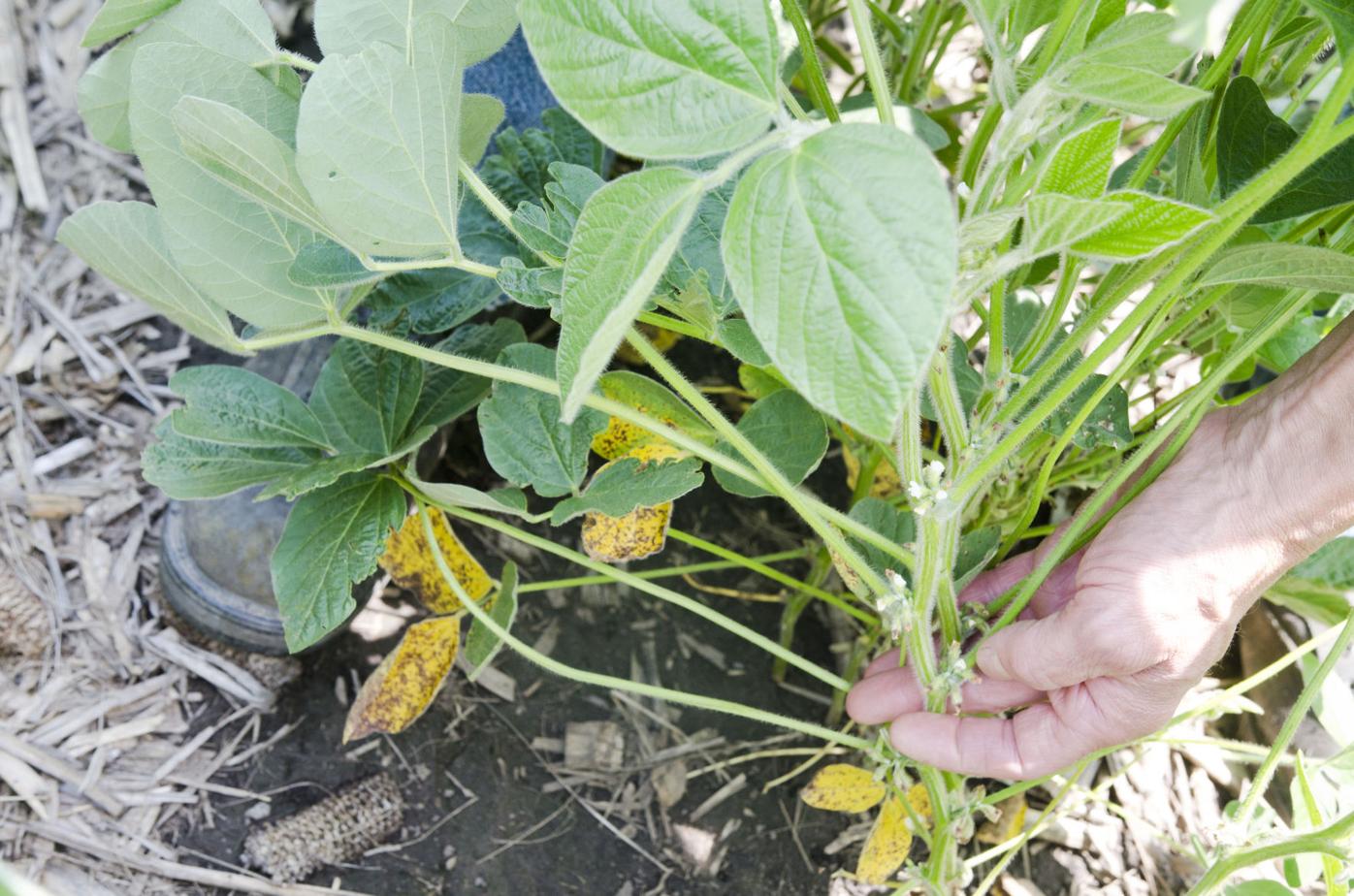 Soybeans are currently in the third reproductive stage, defined where the pods are 3/16 inches at one of the four uppermost nodes. The soybeans move into the next stage of reproduction when pods are 3/4 inch. (Michelle Vlasak/southernminn.com)

Bob Sommers, a crop farmer southeast of Faribault, reports that soybeans and corn have come along well after the late rains received. While there were some dry conditions while the seeds were germinating, Sommers says overall his area received a lot of the rains parts of the surrounding areas didn’t. (Michelle Vlasak/southernminn.com)

Soybeans are currently in the third reproductive stage, defined where the pods are 3/16 inches at one of the four uppermost nodes. The soybeans move into the next stage of reproduction when pods are 3/4 inch. (Michelle Vlasak/southernminn.com)

Despite the unseasonably dry weather earlier in the growing season, Mercedes Moffett says field crops in the local areas is relatively good.

While the growing season got off to a dry start, Moffett, who serves as the interim extension educator, ag production systems for the University of Minnesota in Rice and Steele counties, says the region has been much more fortunate than other parts of the state. Even though there have been some rain showers here and there, Moffett indicates the area is under the average precipitation by quite a few inches.

“When it was hot things were looking kind of touchy, but I would say we’ve had enough rain to keep things going,” said Moffett. “Obviously we need more we need more, even with [Wednesday’s] rain which was good. It’d be nice if we could get a shot weekly, but we can’t predict the weather.”

During the week ending July 11, 2021, USDA’s National Agricultural Statistics Service reported topsoil moisture supplies were 27% short, while subsoils came it at 26% very short, both with a 0% surplus in Minnesota.

Since April 1, the National Weather Service reported precipitation deficits ranging from 2 to 9 inches in northeast Iowa, from 2 to 6 inches in southeast Minnesota, and up to 9 inches in western Wisconsin (highest deficits in Grant County). The drought is mainly impacting top and sub-soil moisture and causing some below-normal river flows. The U.S. Drought Monitor lists the southeastern Minnesota area in a moderate drought. Other portions of the state are in a severe drought, with a part of northern Minnesota battling extreme drought conditions.

Though its a given that rain is important during every stage of a plant’s life, for corn that’s just starting to tassel, Moffett said Wednesday’s rain came at just the right time. She added the most important times for corn to get rain are two weeks before and two weeks after the tasseling begins. Prior to tasseling, the plant will not see yield loss if damages from drought-like conditions occur. In drier parts of the state, when the corn tassels without getting moisture, Moffett says it can cause issues with the plant either not silking or for the silk to be shorter/take longer to appear. The condition of the silks determines the number of kernels the cob of corn will have, therefore determining the yield.

Soybeans, which Moffett describes as a hearty, resilient plant, are coming along OK, and are not a concern, though a little bit of extra moisture could always help the plant.

“The soybean fields are starting to look filled out, much better out here than other places throughout the state,” said Moffett. “The rain we [got Wednesday] is so well needed and welcomed, it’s a blessing.”

Confirming Moffett’s observations, crop farmer Bob Sommers said both soybeans and corn were planted in good time since it was on the drier side, presenting good planting conditions. The soil was a little dry for germinating and Sommers noticed some unevenness in the plants. Southeast of Faribault, where his farm is located, Sommers explains the heavy, black dirt holds the moisture pretty well.

The cool weather in May contributed to the plants appearing a little shorter than usual, but Sommers says since the late rains came through, things have come along well. The soybeans, which are currently in third reproductive stage, are at a good place to begin spraying fungicide to preserve the yield. The third stage (R3) is when the pods are 3/16 inches at one of the four uppermost nodes.

Sommers found it remarkable how well the hybrid seeds handled the dry weather conditions June presented. He feels optimistic with where the crops are at and the potential they have.

Small grains looking promising as well, said Moffett. A small grains expert at a tour in Rochester confirmed Moffett’s observations, adding that things in this direction look good. Due to the decrease in bugs this year, Moffett said it didn’t seem like the alfalfa took too much of a hit, since the diseases weren’t as prevalent.

Moffett encourages those interested to participate in weekly Field Notes online Zoom meeting on Wednesdays, where experts talk about current trends with crops across the state. Even if a particular question a grower has in mind doesn’t revolve in the specific topic that week, Moffett said they are free to join and ask questions in real time. For those unable to make the weekly meeting, a podcast is available on the University of Minnesota Extension website, extension.umn.edu.

The Field Notes program is designed for farmers and agricultural professionals as a weekly webinar program addressing all your crop-related questions in real-time in an interactive, discussion-based format.

It takes place from 7:30 to 8 p.m. Wednesdays throughout the 2021 growing season. The program features a live webinar with an interactive discussion with attendees, addressing in-season cropping issues as they arise. Weekly topics will be announced on the week of the program and may include topics related to soil fertility, agronomics, pest management, equipment and more.

The discussion-based series will be posted immediately following the webinar to your favorite podcast-streaming service to listen to at your convenience. Listen to the episodes on your web browser or subscribe on iTunes and Stitcher.