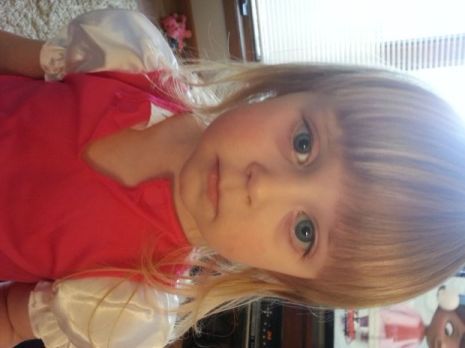 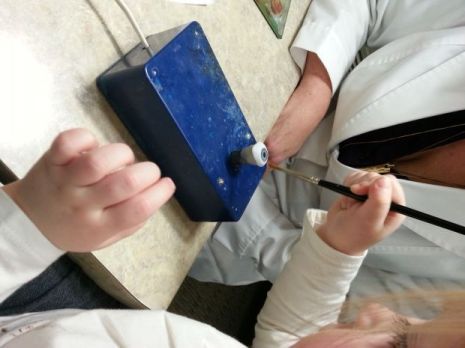 While an infant, 2-year-old Madison Mueller lost her right eye to retinoblastoma, a rare form of eye cancer.

Only about 300 kids in the U.S. are diagnosed annually with retinoblastoma.

Madison underwent chemotherapy in New York at 8 months old to keep the cancer from spreading, but the cancer was untreatable.

“We were devastated when we heard it was untreatable,” said Madison’s mother, Casey Carlson. “It was either her eye or her life. It could spread to her brain and everywhere else.”

Madison’s eye was removed at Mayo Clinic when she was just 9 months old. A month after the surgery, she was fitted for a prosthetic eye.

Madison went to get her new prosthetic eye on Tuesday in Rochester, where she participated in the process by helping paint it.

“They’re trying to get her excited about her new eye by letting her help paint it,” said Carlson. “They hand-paint her eye while she’s sitting there. They would paint and have her paint when it dried.”

Removing and reinserting the eye is uncomfortable for Madison, but not painful. This time instead of making a mold in her eye, they were able to use the old eye to make a new mold.

Madison is fitted for a new eye about every two years and still had the original one that she got in May 2013. Until recently, additions have been made to the original eye, then it got too small and they had to make a new one.

Carlson said it used to take a week to get a prosthetic. Now, they can do it in one day.

“She was excited about getting her new eye,” Carlson said. “The only part she doesn’t like is when they have to keep taking her eye out and putting it back in. She has to go look at her eye socket in the mirror when the eye is out. It’s pretty cute.”

Reach reporter Camey Thibodeau at 333-3128. Follow her on Twitter.com @CameyThibodeau.