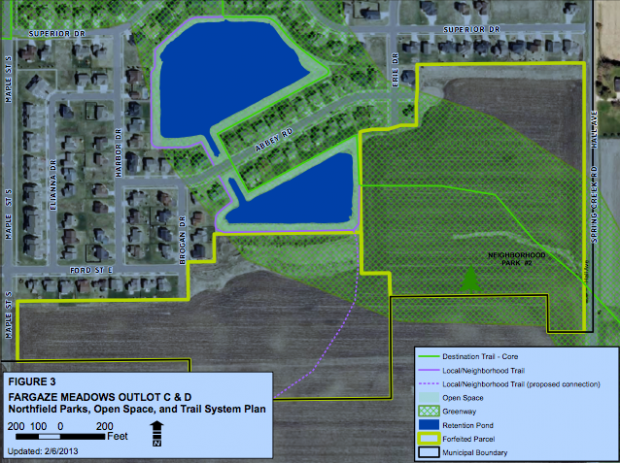 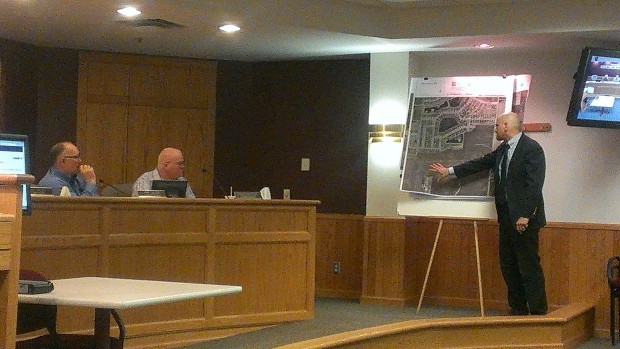 Rice County auditor/treasurer explains the geography and size of the two parcels of tax forfeited land that Northfield will acquire to the Rice County Board of Commissioners.

Rice County auditor/treasurer explains the geography and size of the two parcels of tax forfeited land that Northfield will acquire to the Rice County Board of Commissioners.

Land that has been an eyesore and burden to Rice County for years will soon be handed off to Northfield to be turned into a new parks and trails area for the city.

The land is divided in two plots and makes up about 40 acres on the south side of Northfield. Once part of the Fargaze Meadows subdivision, the land has remained undeveloped since 2008 when the property went into foreclosure.

Northfield will acquire the land, which was tax forfeited to the county in 2011, for free because of a state law that gives ownership priority to municipalities interested in developing tax forfeited property. Any other claims by interested investors or the original owners become null and void once a city, like Northfield, expresses formal interest.

“The county has held this land for about one and a half years. Now two parties have asserted their ‘right’ to re-purchase this property,” county auditor/treasurer Fran Windschitl said during a Rice County Board of Commissioners meeting on Tuesday. “They received numerous notifications, they had a lot of time to act but they didn’t.”

Rice County Attorney Paul Beaumaster said that when it comes to tax forfeited property, an original owner can have the opportunity to gain the land back after paying back taxes and penalties. But once a municipality steps in to the picture, all other investors are edged out.

“In this case, though, [the law] allows the city to first come in and then we’re required to give it to them at no charge,” Beaumaster said.

The county board was pleased that Northfield is considering converting the 40 acres of mostly farm fields into parks and trails -- even taking special care to note in the resolution that granted Northfield the land that “a park containing trails, open space and ponds” would be the “best public use” for the property.

But converting the land will neither easy nor cheap. A giant mound of dirt lies on the north part of the land, which not only makes for a poor view, but also causes a lot of problems for the homes in the neighborhood.

Windschitl said the neighborhood kids play on the mound, despite “No Trespassing” signs posted.

Commissioners Jake Gillen and Galen Malecha noted that numerous residents living along Abbey Road in Northfield, which abuts the 40 acres in question, have had to deal with flooding because of the poor drainage as a result of the dirt mound.

County engineer Dennis Luebbe estimated it could cost up to $280,000 just to move the dirt.

“We will address the dirt pile,” Northfield city administrator Tim Madigan told the board, after first joking about whether the county wanted to keep it. “Disturbing the pile at this point might actually do more harm than good because a lot of ground cover has grown up on it.”

Gillen suggested building a berm or some kind of buffer between the Abbey Road houses and the dirt pile to send rainwater around the houses, instead of directly into them.

“[A berm] won’t be appetizing to look at, but neither is a basement full of water for these people,” Gillen said.

During a March Northfield City Council meeting, Madigan said that the acquisition, would give the city three years to explore various options to develop part or all of the two large parcels.

The new park, once developed will be available and accessible to the public and maintained by Northfield’s parks department.

Reach reporter Cristeta Boarini at 333-3135. Follow her on Twitter.com @FDNCristeta

Reach reporter Cristeta Boarini at 333-3135. Follow her on Twitter.com @FDNCristeta

Born and raised in suburban Chicago, Cristeta graduated from the University of Minnesota Twin Cities with a degree in journalism and cinema studies in 2011. She began working with the Faribault Daily News in September 2012.