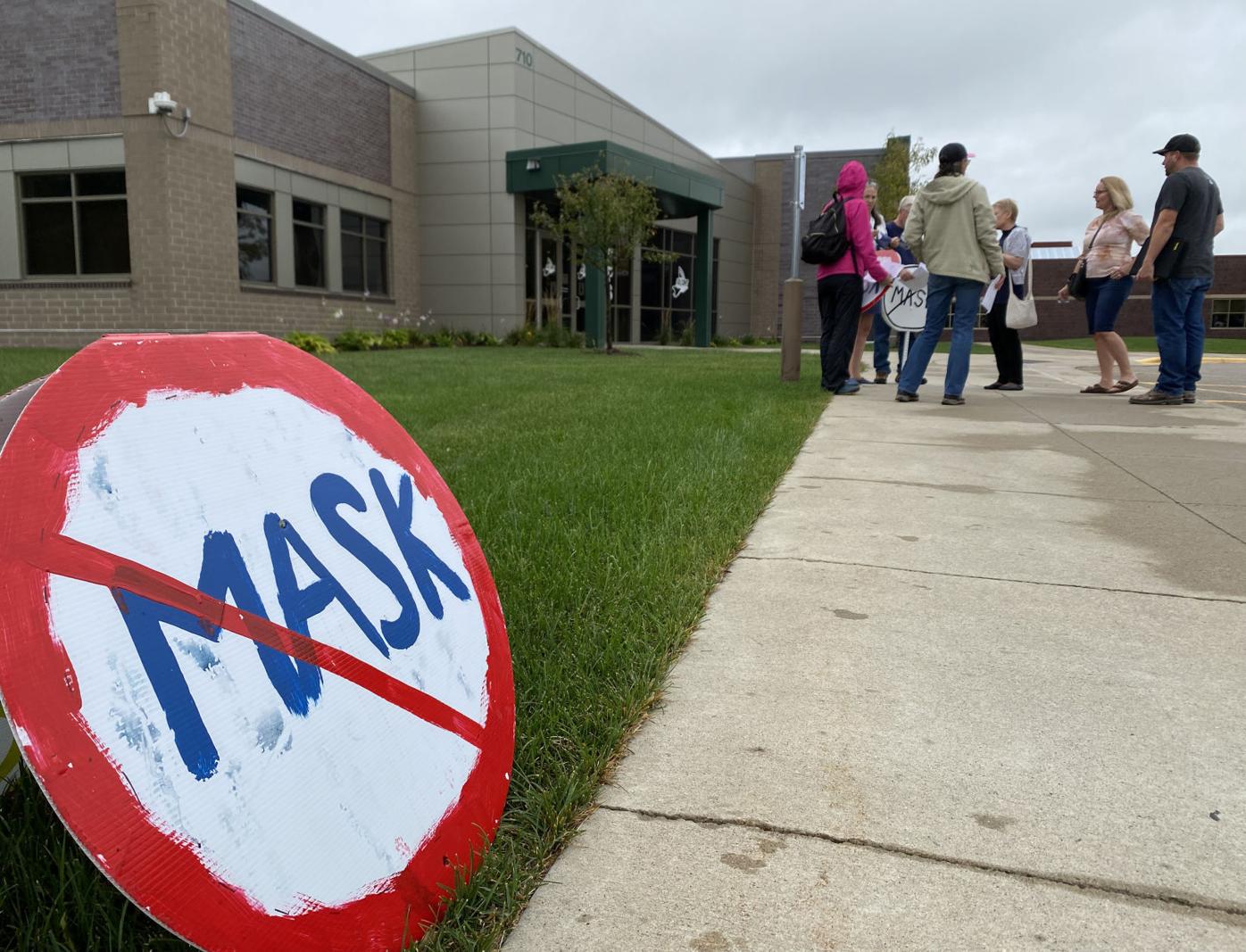 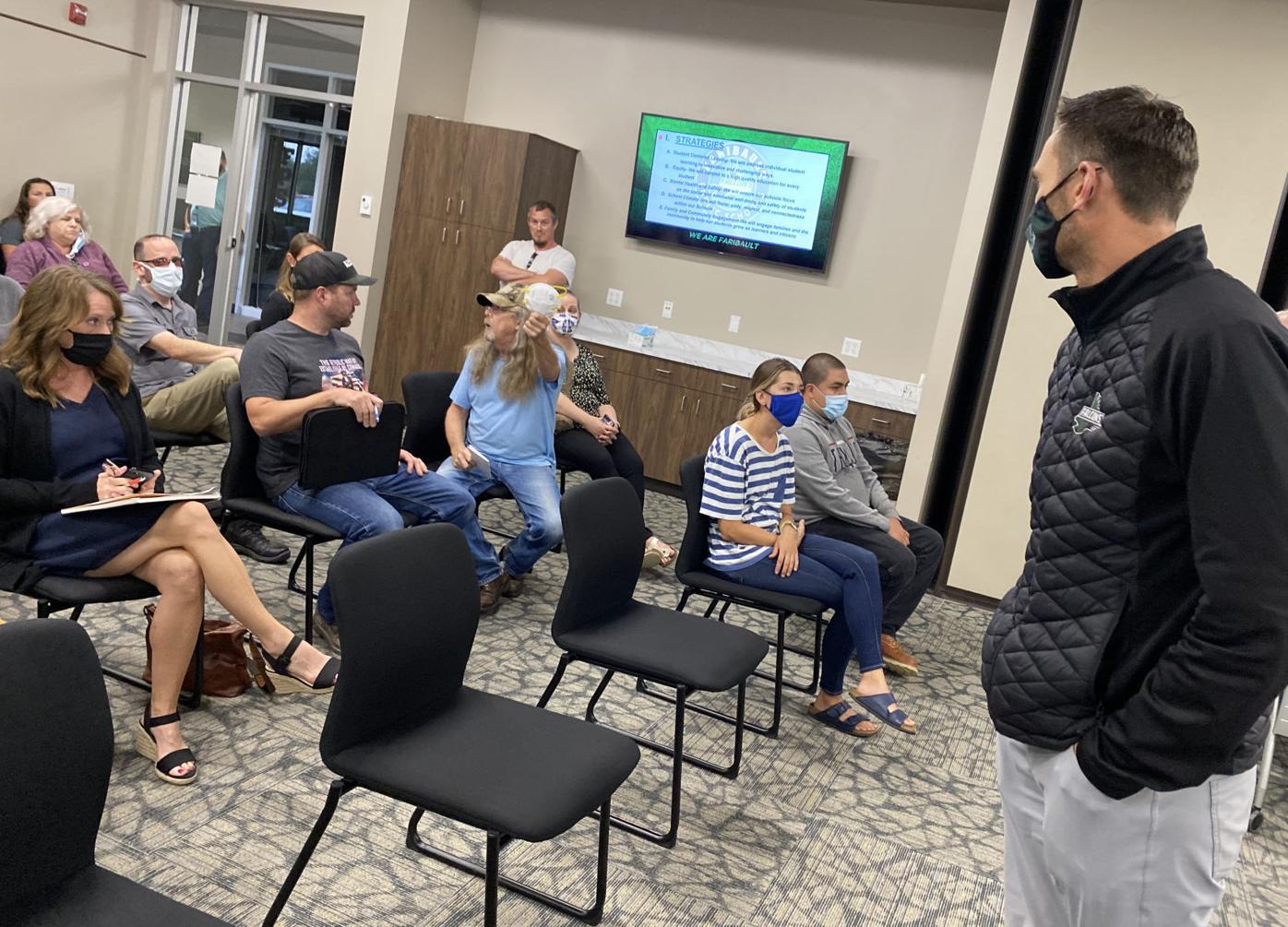 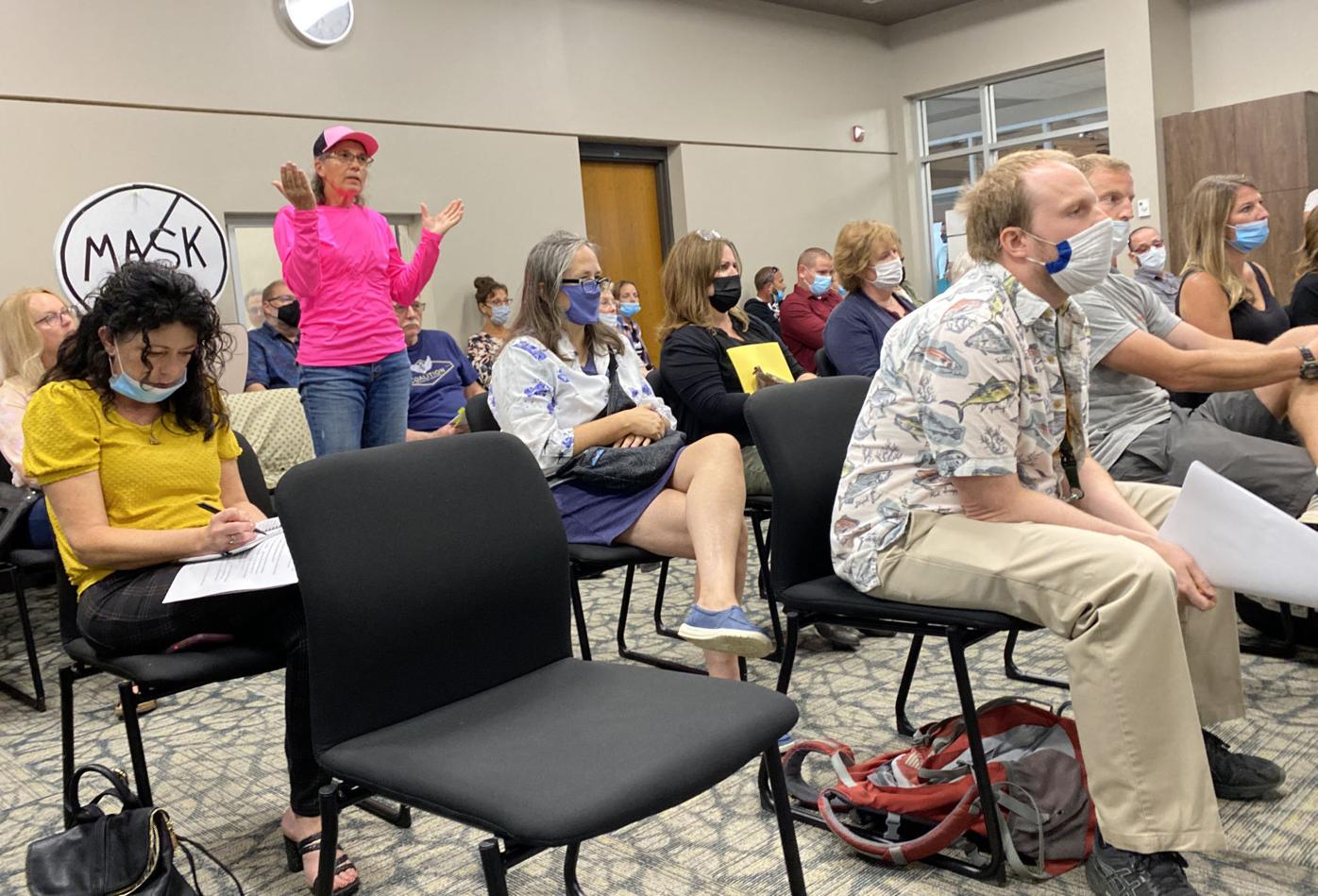 An audience member at Monday night’s Faribault School Board meeting questions the need to mask to remain in the board room, saying she hasn’t worn a mask since COVID began. (Suzanne Rook/southernminn.com)

An audience member at Monday night’s Faribault School Board meeting questions the need to mask to remain in the board room, saying she hasn’t worn a mask since COVID began. (Suzanne Rook/southernminn.com)

Rice County’s case COVID-19 case rate will now determine whether masks are required or recommended for anyone over 5 when they’re inside Faribault Public Schools.

When the seven-day case rate is considered substantial or high, per Centers for Disease Control and Prevention guidelines of 50 or more per 100,000, masks will be required. Masks will be recommended when cases rates are 49 or lower. As of Sunday, Rice County’s case rate was 261.

The policy will take effect Wednesday, according to a Tuesday letter sent to district parents.

Monday’s 5-2 vote (Board members Richard Olson and Casie Steeves voted no) came with plenty of discussion, most of it coming from the 40 or so area residents who attended the meeting, which began with a stutter. Board Chair Chad Wolff warned attendees about 8 minutes to go that they needed to mask up, per school district policy that anyone over 21 wear masks, or the board would go into recess.

That angered some audience members, who called out to board, threatening to remove them from office and alleging the requirement infringed on their freedoms.

The meeting was called to order, but quickly recessed — twice — when about a dozen people refused to mask.

“We have to show them we can move forward in a reasonable fashion,” resident Leah Shoop said during one of the recesses.

“We need to testify. We need to be heard,” said former state legislator Lynda Boudreau, who didn’t support the proposal, but told the crowd masks were a means to an end.

Faribault Middle School science teacher Nathan Rockow agreed, saying that if the board didn’t hear the testimony residents had prepared, “nothing will happen. … I want our kids to be (mask) free in our classrooms.”

After 20 minutes of back and forth, including a personal plea from Wolff, unmasked audience members left the board room, allowing the meeting to start.

Nine speakers from both sides addressed the board, nearly twice as many as the five it announced would have an opportunity to speak. And while they disagreed on the proposed policy, all seemed to agree that children need to remain in school.

Masking should be an individual choice, said resident Tracy Patterson.

“We are not forcing anybody to remove their masks. Why is that? Because it’s an overreach into personal freedom, liberty and choice … I am here to remind you the ultimatums and coercions to force or mandate a child and their family to discard, relinquish or abandon their freedoms is a very slippery slope and something very unAmerican.”

Ronald Keller, who also opposed the policy, said the board wasn’t basing it decision on facts. Resident Bree DeGroot, previously a fierce mask proponent, told the board she’s changed her mind, now finding herself with “God and truth pushing (her) forward.”

Both claimed the COVID survival rate was over 99% and that masks aren’t safe because they trap viruses that are then inhaled. A Danish study, Keller said, proved mask use doesn’t have a statistically significant impact on stopping the spread of COVID.

According to an Aug. 6 Politifact fact check, the CDC’s provisional death counts for COVID-19 “should not be used to infer a survival rate. Experts say that during a pandemic, it’s difficult to determine survival rates — such rates are usually calculated for a longer period of time, rather than as a snapshot.”

While the Danish study, conducted on more than 3,000 people in April-June 2020, didn’t show a statistical difference between those who wore masks and the control group, the American College of Physicians said that because because the trial did not test the role of masks in transmitting the virus from an infected person to others, the findings shouldn’t be used to determine the effectiveness of masks in reducing COVID infections.

Resident Kari Tuma and Sara Coulter, a Rice County Public Health coordinator who’s been working with the district’s Incident Command Committee, which has helped lead the response to COVID, agreed that keeping students in the classroom is paramount.

Tuma described how she felt her now freshman son had been doing well during the pandemic. But since his return to in-person learning she’s seen him brighten, become more social and involved with friends and school activities.

“It’s important they remain in the building,” she said. “They have lost a lot.”

Coulter reiterated her advice from last week: “The district that has the best chance of maintaining in-person learning puts in the most layers of protection.’

This time last year, the district had six layers, she said. This year it has three, with three times the number of “sick people.”

The district’s COVID dashboard showed 21 cumulative cases (staff and students) on Monday, Sept. 13. A week later, there were 28.

Board member Richard Olson says the district isn’t doing all it can to reduce the spread, claiming he’s asked for more attention to cleaning and the district’s ventilation systems, but was “shot down.”

Board member Jerry Robicheau told residents that he’d looked at the research on both sides of the issue, but found that “to a person it does not in fact support the dangers of masks that were presented tonight. … We have a moral obligation on this board to ensure that all of our students and staff are attending a school that is safe, free from harm and includes a healthy environment. … In order for us to ensure all children are safe, we have to take some actions that are not favorable to many of you.”

Those requesting a religious or medical exemption are asked to contact the appropriate building administrator.