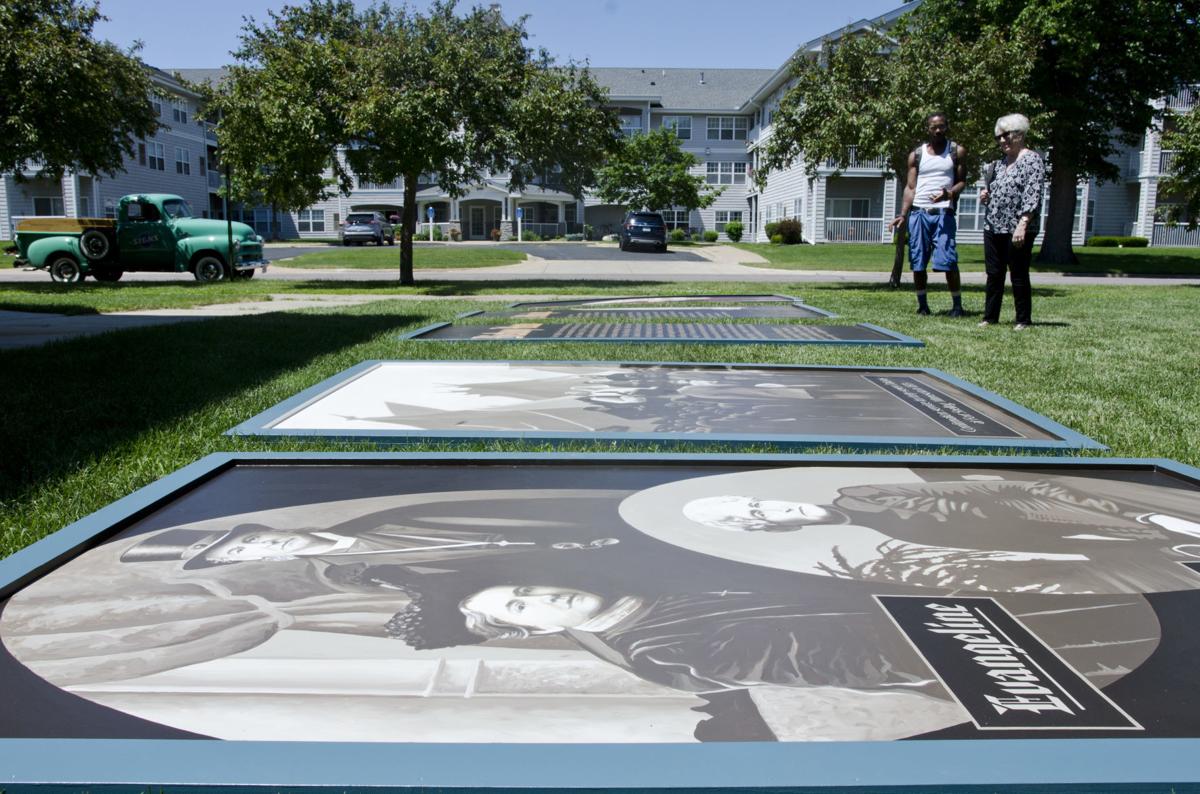 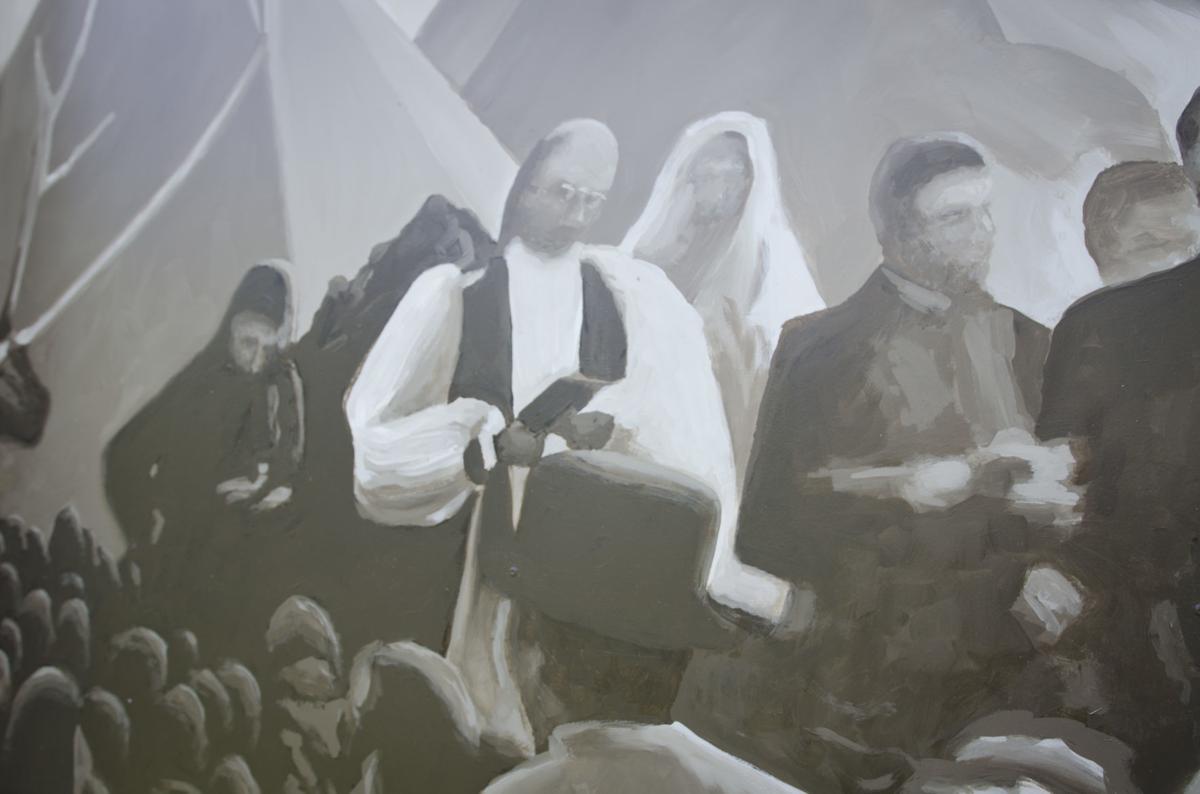 Pictured is the detail of one of the three panels, featuring the confirmation service for 47 Dakotas at Fort Snelling, Minnesota in 1873. (Michelle Vlasak/Faribault Daily News) 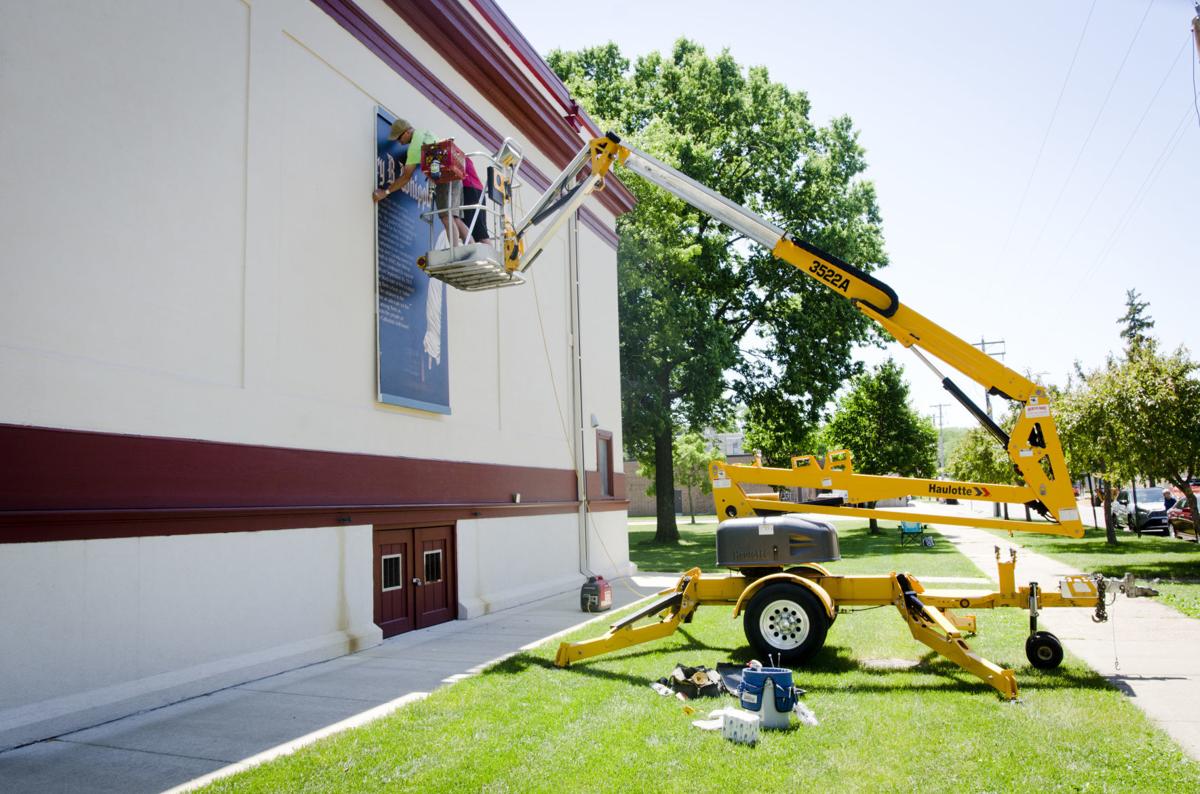 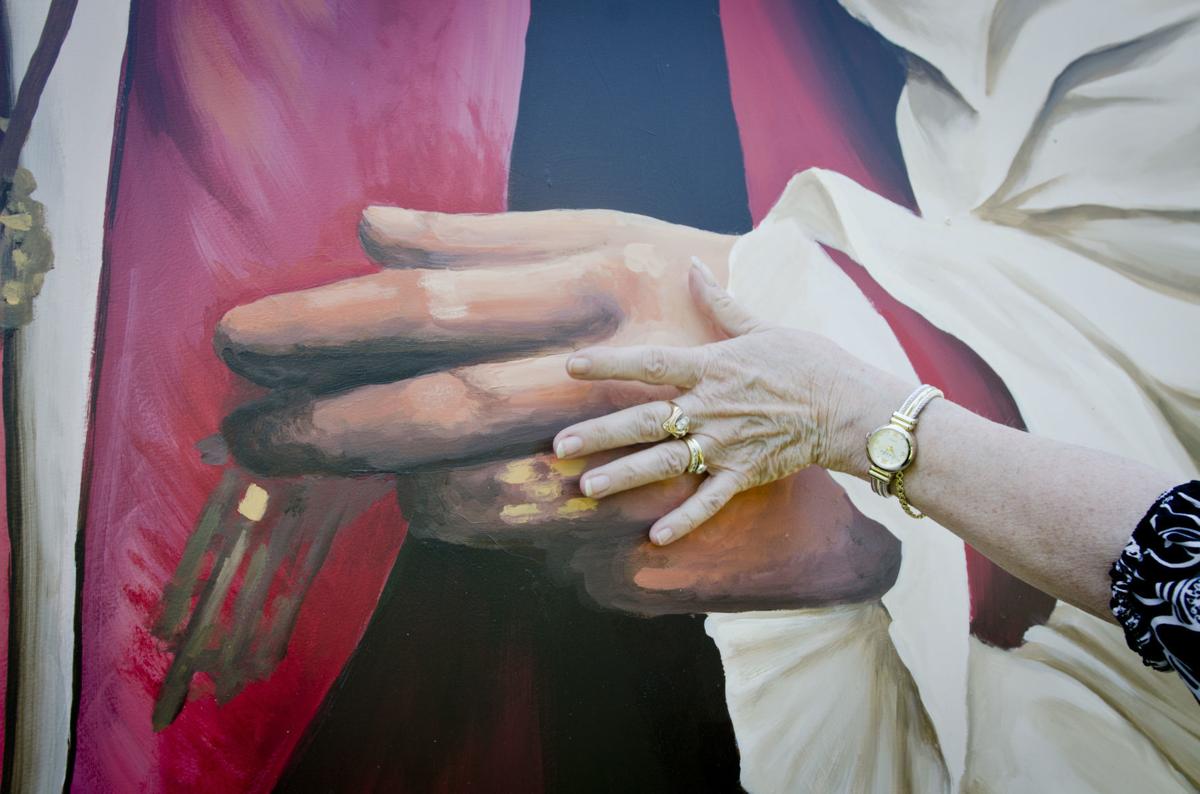 Gail Kielmeyer holds her hand over Bishop Whipple’s as a reference to the actual size of the panels. 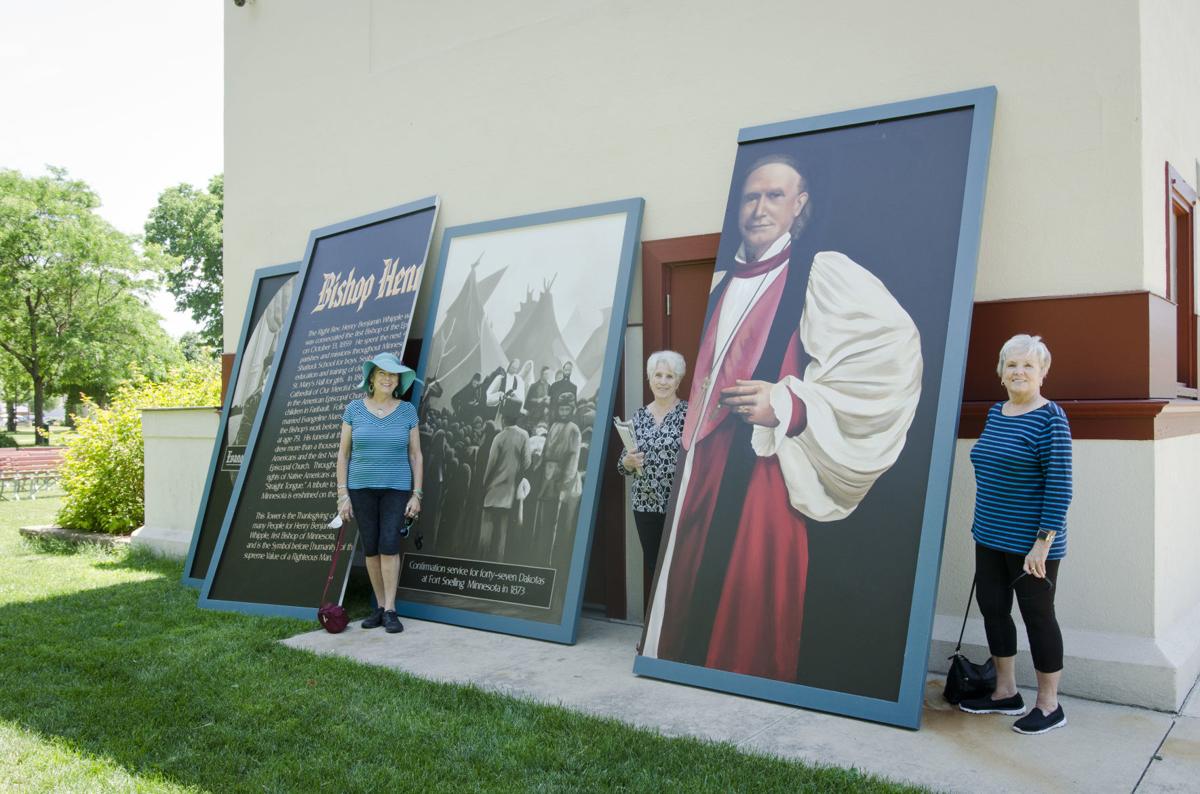 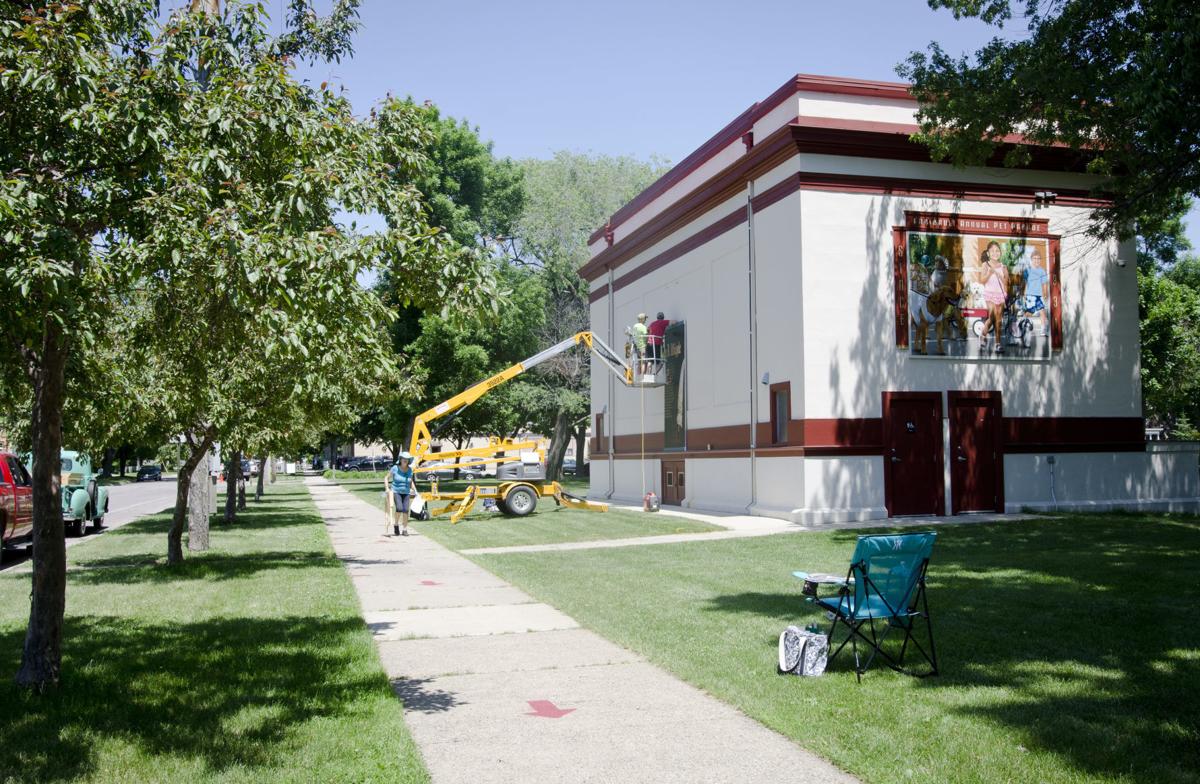 Bishop Whipple’s mural, installed on the west side of Central Park’s bandshell, joins one other mural financed by the Mural Society, the annual Pet Parade.

Pictured is the detail of one of the three panels, featuring the confirmation service for 47 Dakotas at Fort Snelling, Minnesota in 1873. (Michelle Vlasak/Faribault Daily News)

Gail Kielmeyer holds her hand over Bishop Whipple’s as a reference to the actual size of the panels.

Bishop Whipple’s mural, installed on the west side of Central Park’s bandshell, joins one other mural financed by the Mural Society, the annual Pet Parade.

Several years in the making, the Mural Society of Faribault, whose goal is to promote history, recently financed its seventh mural featuring the first Episcopal bishop in Minnesota — Bishop Henry Whipple.

Bishop Whipple’s three-part mural, painted by local artist Dave Correll of Brushworks Designs in Faribault, was installed on the west side of Central Park’s bandshell Friday by Correll and his son Sam.

Correll painted the three pannels over the course of this last winter, and during the extra time created from this year’s stay-at-home order.

Karen Winslow, a member of the Mural Society of Faribault, found pictures of Whipple in the Shattuck-St. Mary’s archives to include as part of the mural panels. Both Shattuck and the Cathedral of Our Merciful Savior have made independent donations to the cause since Bishop Whipple was associated with both locations.

The panels include a large portrait of Whipple, along with a short biography of his life put together by staff at Shattuck-St. Mary’s. A second panel portrays portraits of Whipple’s two wives, Cornelia his first wife who died, and Evalengeline, who he later remarried. Both wives continued to be involved in Whipple’s work following his death. Evangelic used the money Whipple left her to further his causes. The mural’s third panel depicts Whipple’s relationship with Native Americans, as an advocate and friend. Each panel portrays a different aspect of Whipple’s life.

Funds raised in the community over the last several years, including funds made from the Recycled Art Sale — an annual event that not only helps art collectors downsize, but also to sell art to businesses and homeowners — went towards the creation and installation of Bishop Whipple’s mural. Attendees of the Recycled Art Sale several years ago voted for Bishop Whipple, founder of the Seabury Divinity School held in Johnston Hall adjacent to District One Hospital, to be the next person depicted in the mural via survey. Due to the imbalance of donations received versus the profit made from the sale, Mural Society members indicate the sale will no longer take place in the future.

Past murals have included city founder Alexander Faribault, an early 1900s ice skating scene on the Straight River, an early 1900s street scene in Historic Faribault, the city’s famous Tilt-a-Whirl and the annual Pet Parade. Another mural of Bruce Smith made possible by the Mural Society of Faribault was funded by the State Bank of Faribault. The majority of these murals — including the new Bishop Whipple mural — are able to be transferred to other sites.

Mural Society member Kathy Larson said everything the society has done so far in terms of the mural depictions, have been a “wonderful” way to help the community “remember where it all started.” Member Gail Kielmeyer said the past murals depict the historical figures and aspects of the community that made Faribault what it is today.

In agreement Winslow said the murals also serve as tourist attractions, so visitors can go around town and learn more about Faribault’s history just by looking at the murals. In terms of Bishop Whipple’s mural, Winslow said after a long process, they are happy to “finally” have it up.

Watch for a photo of the full mural on the west side of Central Park's bandshell in next Tuesday's Daily News or drive by Central Park to see it for yourself.

The text in Bishop Whipple's portrait gathered from staff at Shattuck-St. Mary's states:

The Right Rev. Henry Benjamin Whipple was 37 years old when he was consecrated the first Bishop of the Episcopal Diocese of Minnesota on Oct. 13, 1859. He spent the next 42 years establishing Episcopal parishes throughout Minnesota. He guided the founding of education and training of clergy and with his wife, Cornelia, founded St. Mary’s Hall for girls. In 1862 he laid the cornerstone for the Cathedral of Our Merciful Saviour, the first cathedral to be constructed in the American Episcopal Church. The Bishop and Cornelia raised six children in Faribault. Following Cornelia’s death in 1890, the Bishop married Evangeline Marrs Simpson in 1896, who continued to support the Bishop’s work before and after his death on Sept. 16, 1901 at age 79. His funeral at the Cathedral one block east of this location) drew more than 1000 people, among them a host of Native Americans and the first Native American to be ordained in the Episcopal Church. Throughout his life, he was an advocate for the rights of Native Americans and was known among them as “Straight Tongue.”

A tribute to the Bishop from the people of Minnesota is enshrined on the base of the Cathedral’s bell tower: "This tower is the Thanksgiving of many People for Henry Benjamin Whipple, first Bishop of Minnesota, and is the Symbol before [humanity] of the supreme Value of a Righteous Man."