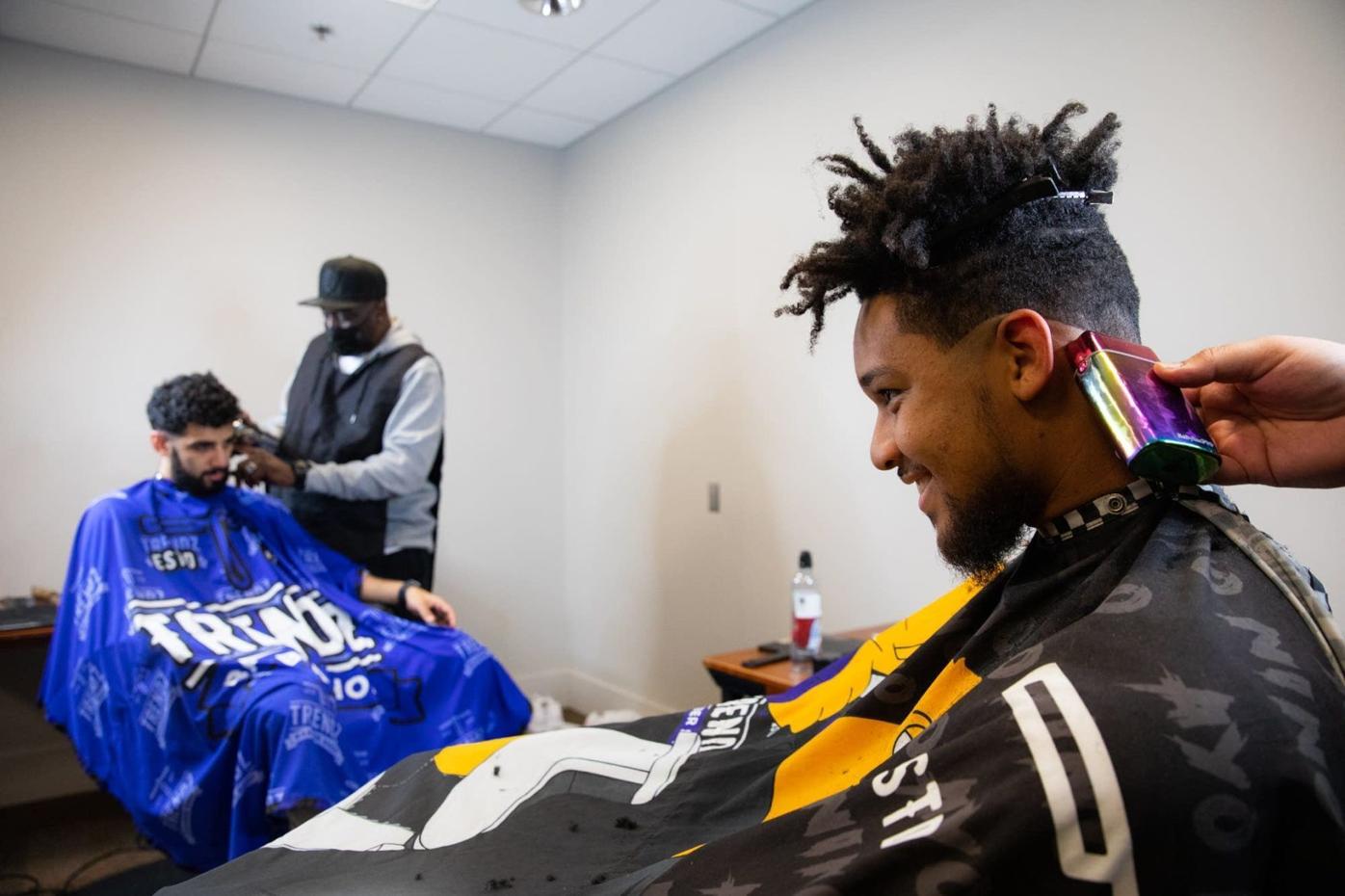 Student-athletes Aidan Lloyd and Partev Galstyan get their hair cut from barbers from Trendz barbershop on Nov. 8. (Evan Frost/MPR News) 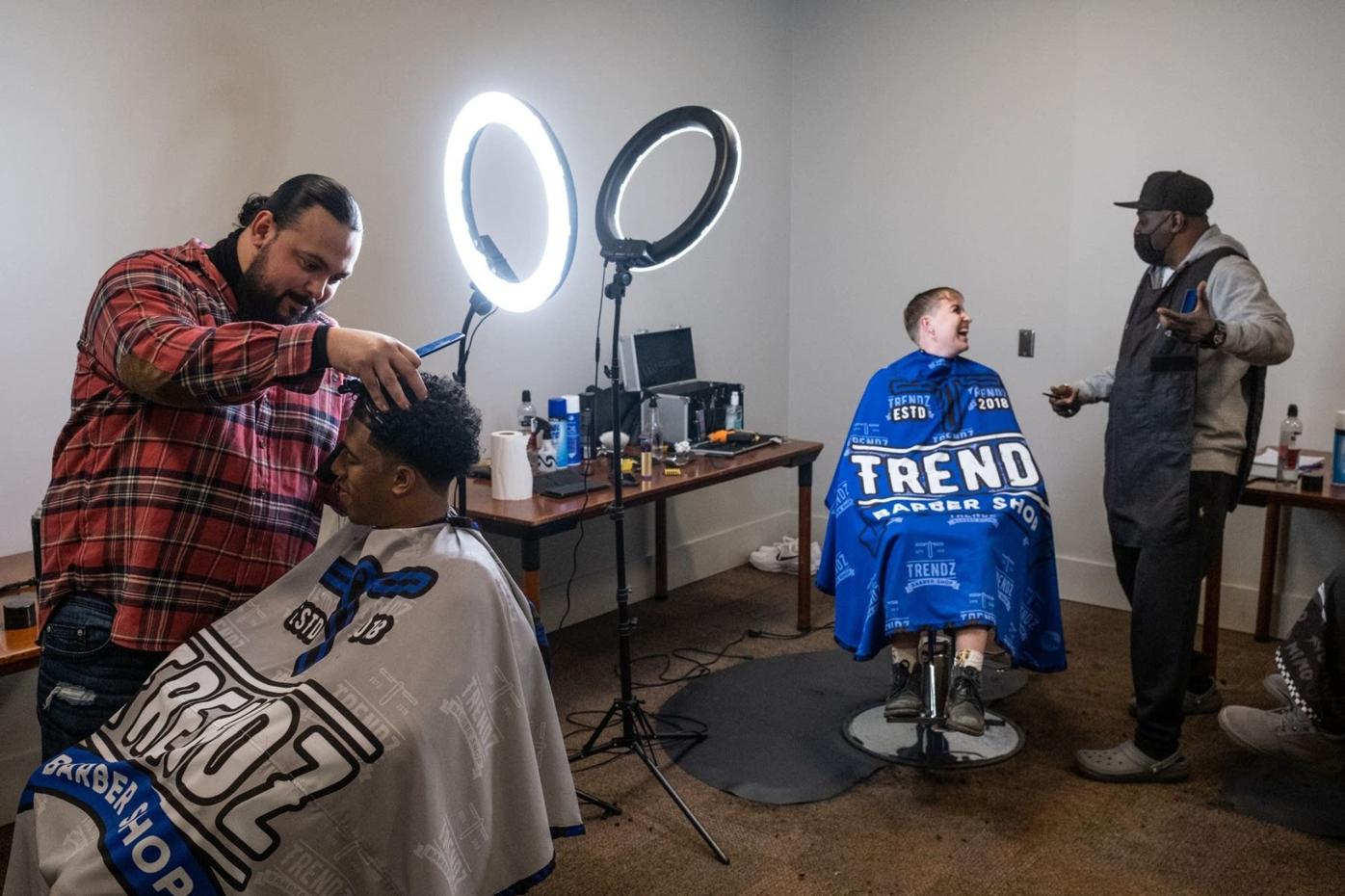 Student-athletes Aidan Lloyd and Partev Galstyan get their hair cut from barbers from Trendz barbershop on Nov. 8. (Evan Frost/MPR News)

The barbers from Trendz Barbershop in Apple Valley talk with the customers seated in the black chairs.

After finding out the type of cut his customer wants, Nino Gutierrez gets the razor. The conversation soon turns to sports and the weekend.

It’s a typical scene from any barbershop, but this one happens to be in a room in Buntrock Commons at St. Olaf College.

The pop-up barbershop began this fall. A group of student-athletes from Oles Against Inequality, or OAI, came up with the idea. The students, many of whom are people of color, saw the need for barbers who knew how to cut different hair textures.

“We decided what if we just had a barbershop of our own? And kind of thought about it from that perspective, and we made it possible,” said Aidan Lloyd, a sophomore football player and member of OAI.

Lloyd, who is Black, would travel 30 minutes away to Apple Valley to get his haircut. He approached Trendz with a proposal for the pop-up shop.

Gutierrez, the barber, said after looking at the proposal and discussing it with the other Trendz barbers, decided to bring their services to Northfield.

Lloyd said he brought Trendz to St. Olaf for a simple reason.

“I wouldn’t have brought them here if I didn’t trust them with my own hair,” he said.

The pop-up shop caters to diverse customers that includes both men and women.

Grace Maxwell is a member of OAI and plays on the women’s soccer team. She wears her hair short. And while barber shops are traditionally for men, Maxwell said haircuts aren’t gendered. These barbers know how to cut her hair.

“I think it’s just kind of breaking down those traditional stereotypes,” Maxwell said.

Having the barber shop on campus does more than just fill a need. She said it also creates a sense of community.

The first pop-up happened in October and Maxwell admitted there were some worries whether students would show up. But she said plenty of people signed up.

“People were so excited to come in and get their haircuts,” said Maxwell.

Currently, the barber shop operates every other Monday and by appointment.

The OAI members secured funding from the athletic department to purchase the three chairs and lighting. St. Olaf Athletic Director Ryan Bowles said providing the money was a “no-brainer.”

“Things that can have a great impact and really impact the overall student experience are the things we want to be spending our money on,” Bowles said.

When the students first proposed the pop-up shop, Bowles said he immediately fell in love with the idea.

“I thought it was a wonderful way to provide a service for people within the community, that they can’t get in downtown Northfield,” Bowles said.

Noah Annicelli sat in a chair by the door waiting for the barbers to return from lunch.

“A big reason why I come to the barbershop is because I’m not familiar with the area,” said Annicelli, who is from Naples, Fla. “And I feel like it’s cool to have a nice barbershop on campus, especially with experienced barbers.”

Jorie Van Nest was getting her haircut for the first time at the pop-up.

Going to a barber for a haircut is not new for Van Nest — she always went to barbers in Boston where she is from.

“I just really appreciate the conversations I have with barbers,” said Van Nest. “And they have such clean cuts and can make me have more of an androgynous look, which I appreciate.”

Gutierrez said the barbers each work on seven or eight students during the time they are there.

“Hopefully in the future, if this keeps going very, very well, we can add another barber, and we can get a lot more students,” Gutierrez said.

Lloyd said he doesn’t want the pop-up barber shop to be limited to St. Olaf. The lack of barber shops catering to people of color is something that colleges across the country are facing, he said. Lloyd said he’s willing to share his experiences with others who want to know how they created the on campus barber shop.

“The only reason why it was us this first time was because a group of students came together and like, we want this,” he said. “So, I think that as far as looking into the future, we want to be able to spread this opportunity to other schools.”