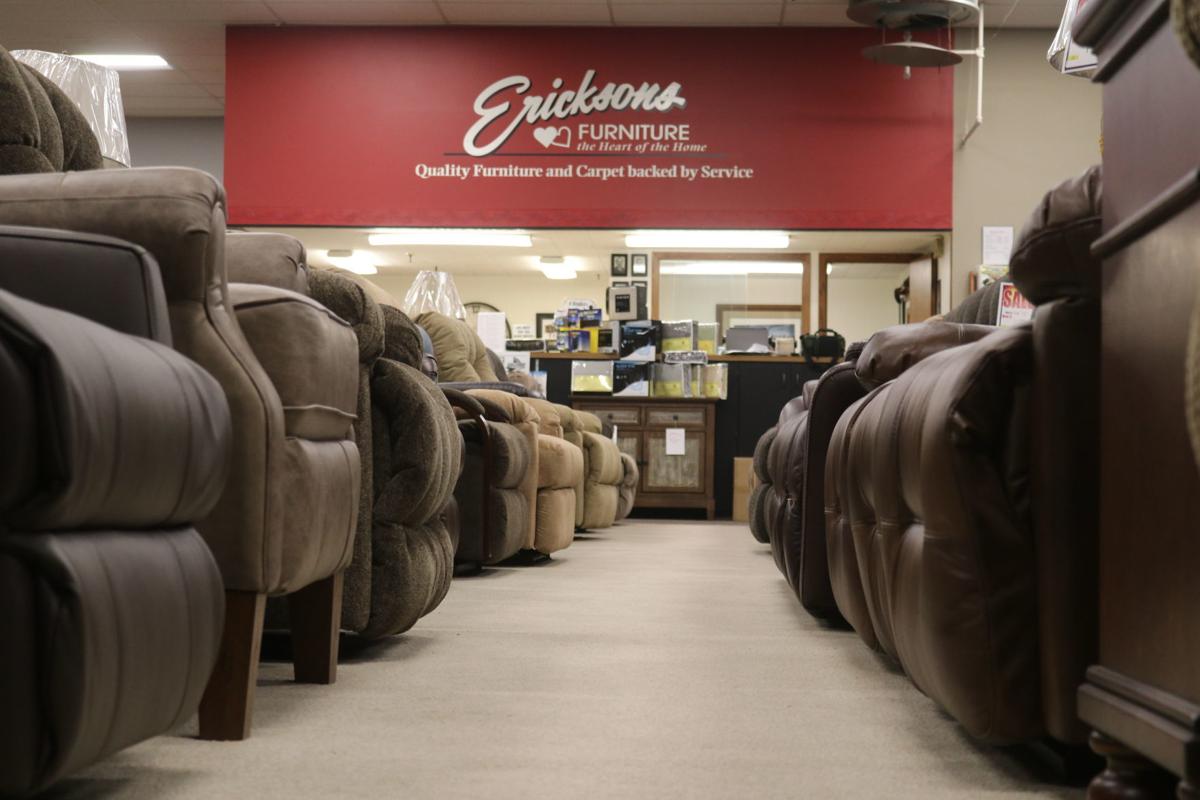 Ericksons Furniture's motto — The Heart of the Home — was inspired the initials of current owner Paul Erickson's grandfather and his two brothers. (Renata Erickson/Fleur-de-lis) 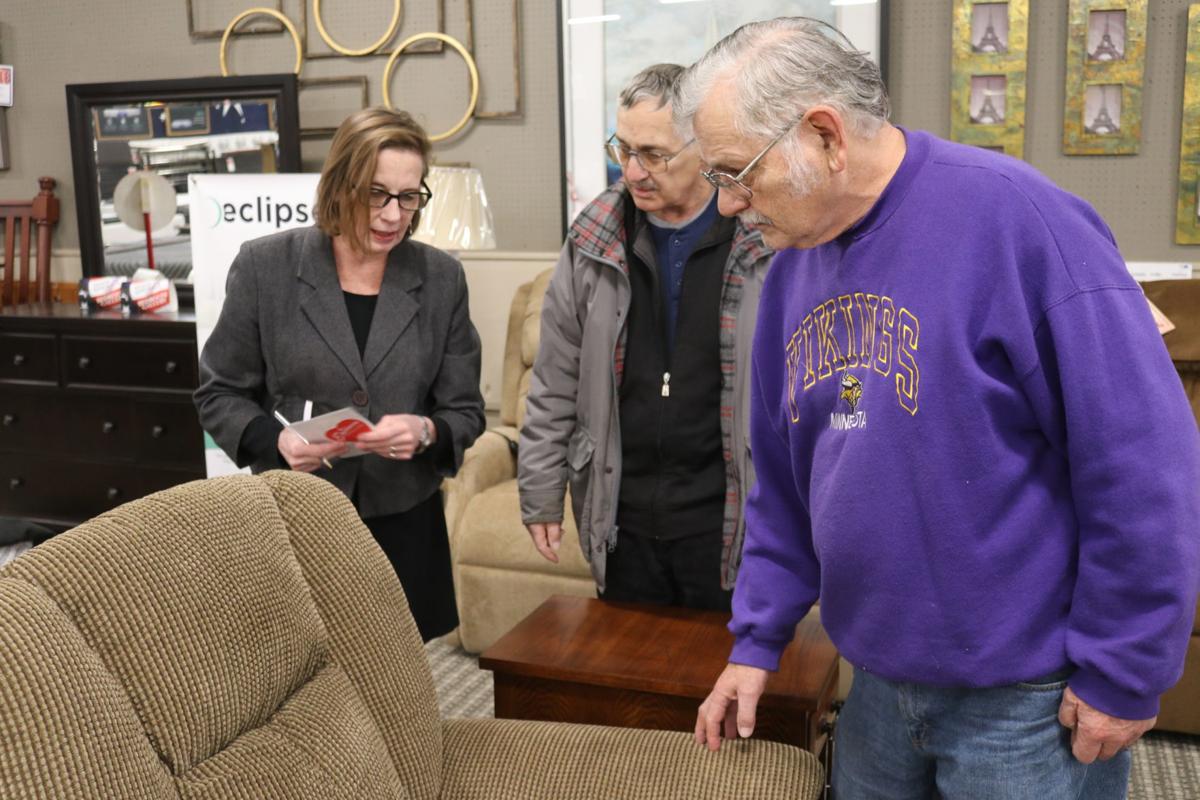 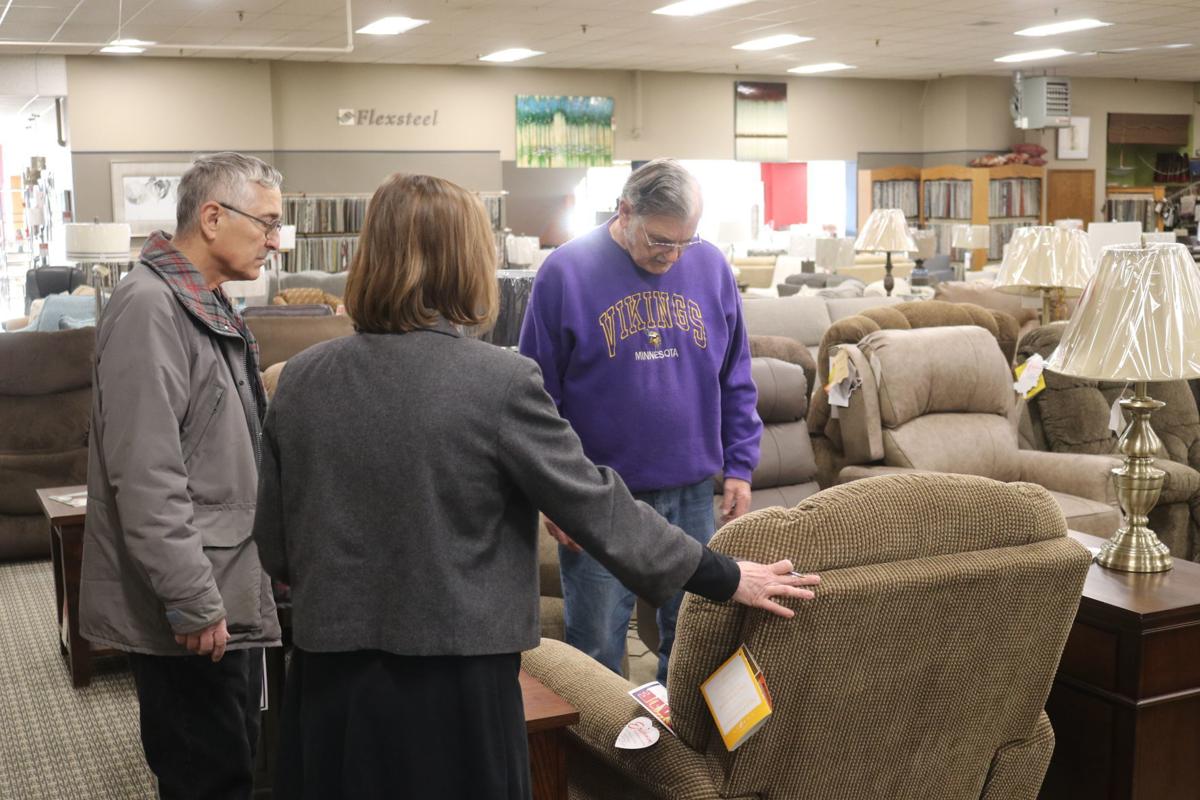 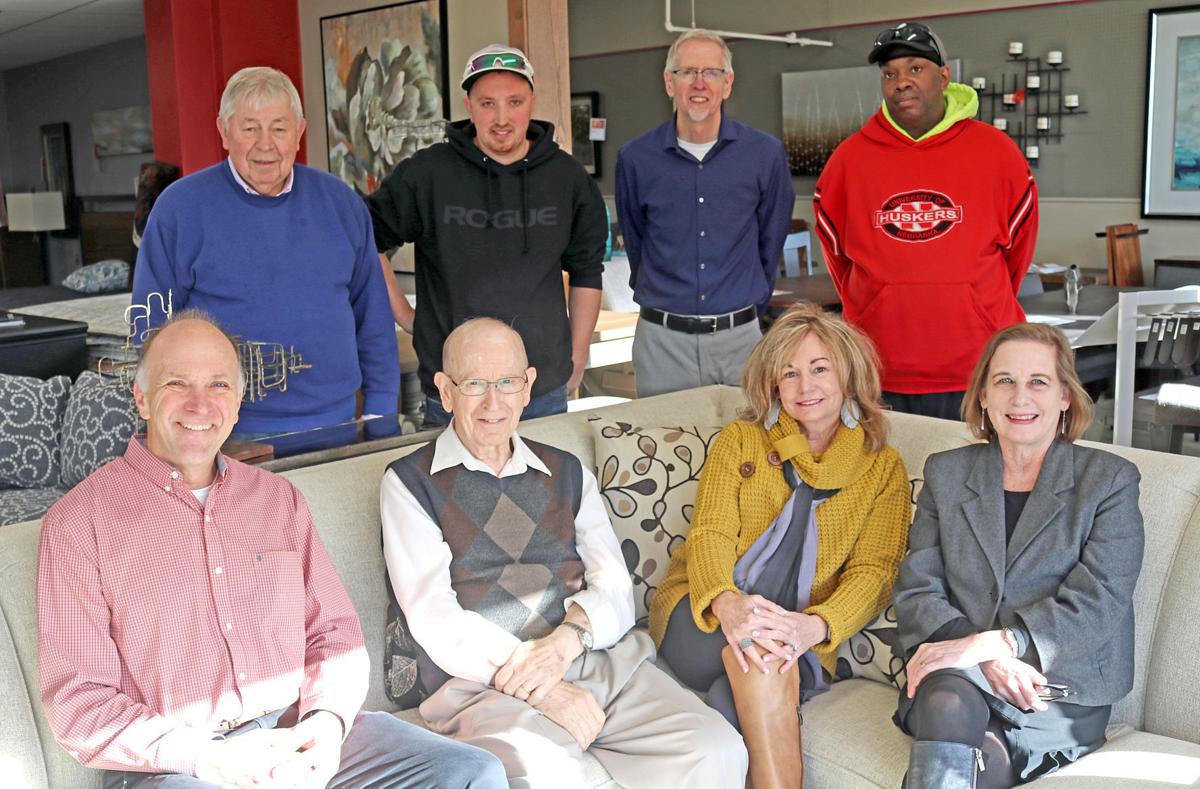 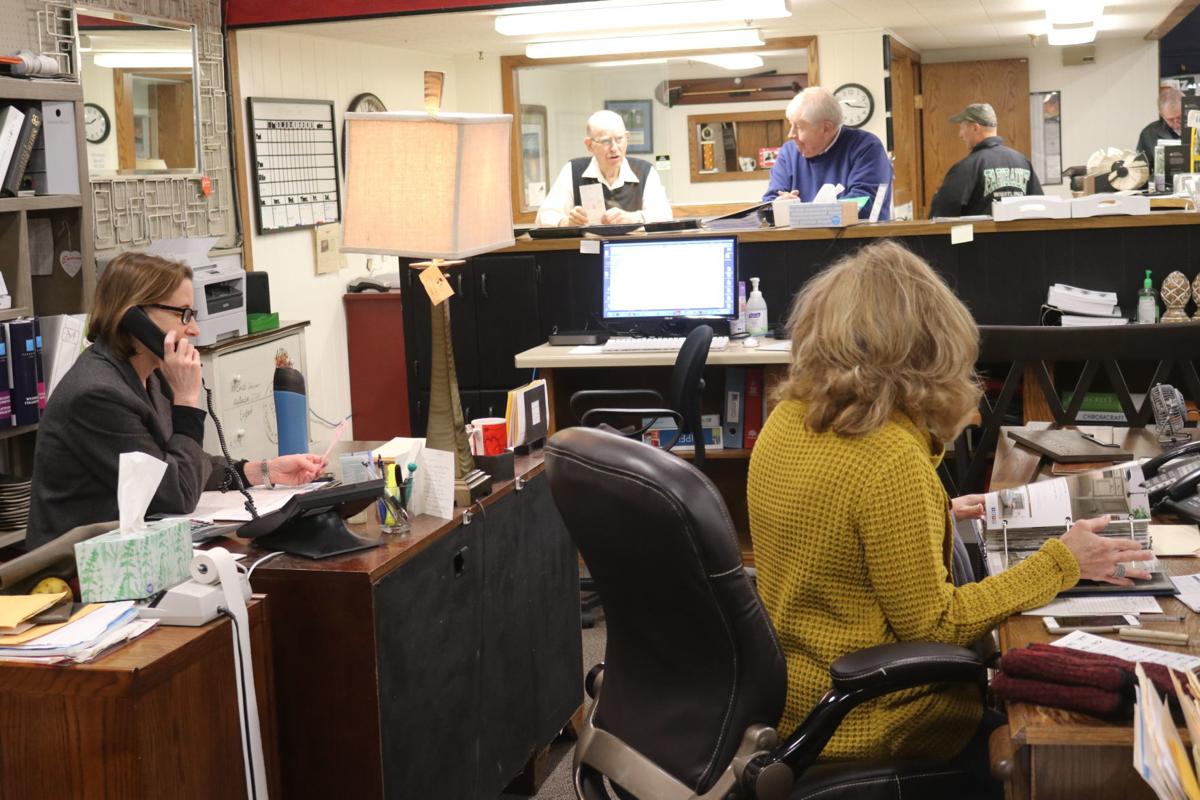 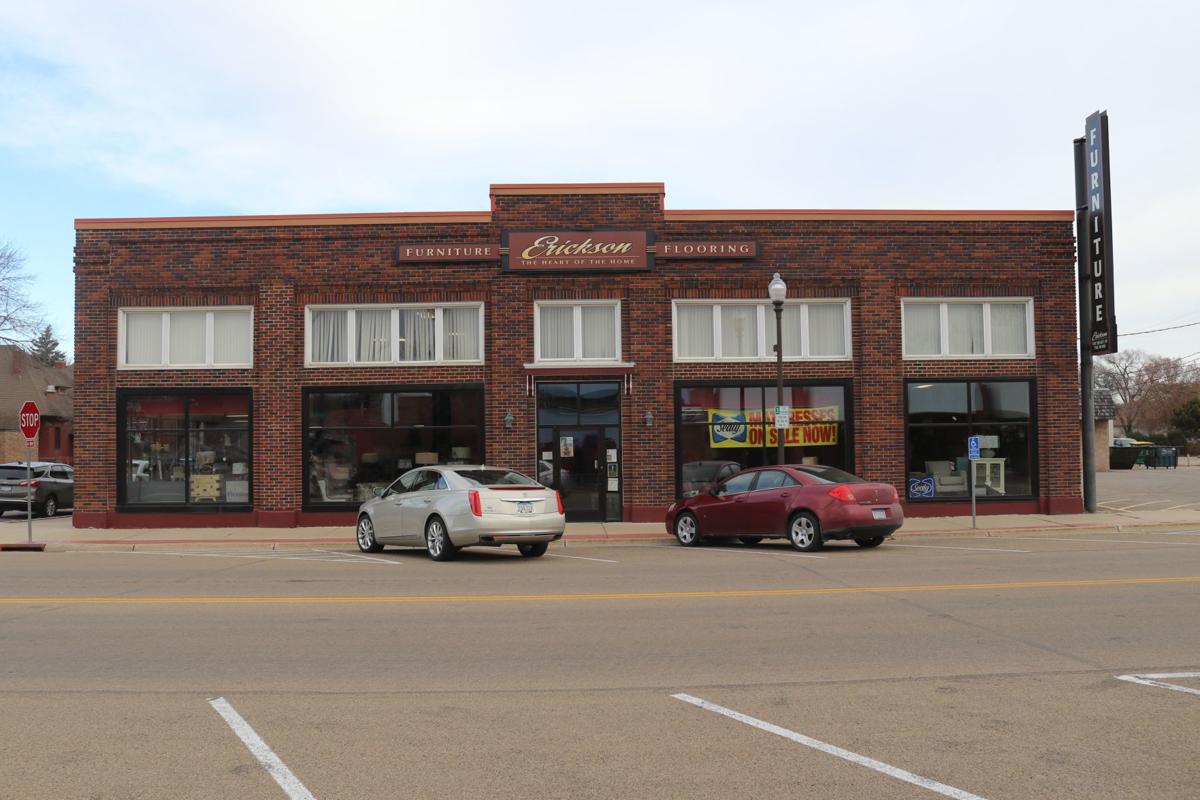 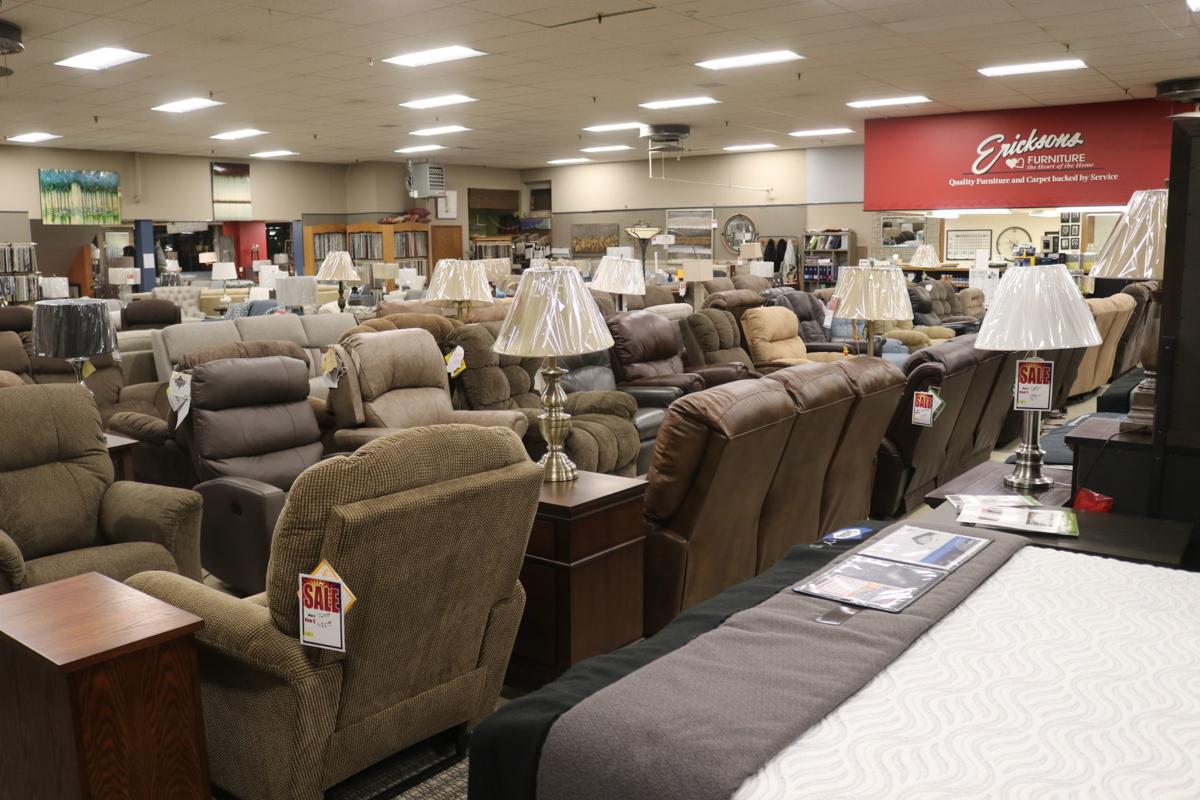 While there are fewer furniture stores in Minnesota, they tend to be larger than ever, says Paul Erickson, owner of Erickson Furniture in downtown Faribault. (Renata Erickson/Fleur-de-lis) 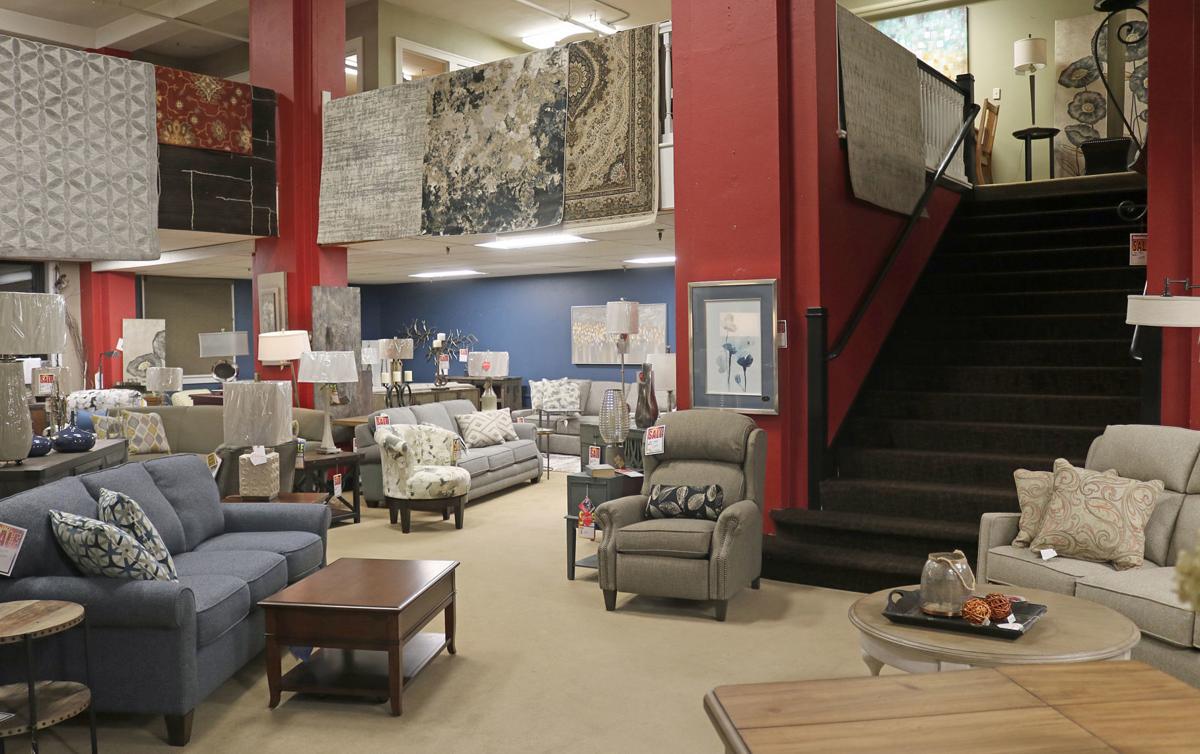 Paul Erickson bought Erickson Furniture from his father Roger in 1992. Roger opened his first store in Faribault in 1956. (Renata Erickson/Fleur-de-lis)

Ericksons Furniture's motto — The Heart of the Home — was inspired the initials of current owner Paul Erickson's grandfather and his two brothers. (Renata Erickson/Fleur-de-lis)

While there are fewer furniture stores in Minnesota, they tend to be larger than ever, says Paul Erickson, owner of Erickson Furniture in downtown Faribault. (Renata Erickson/Fleur-de-lis)

Paul Erickson bought Erickson Furniture from his father Roger in 1992. Roger opened his first store in Faribault in 1956. (Renata Erickson/Fleur-de-lis)

Paul Erickson, owner of Erickson Furniture in Faribault, remembers overhearing his father, Roger Erickson, once explain why furniture from the past seems to last longer.

“I’ve sold furniture in the 50s, 60s, and 70s — there was poorly made furniture back then, too,” Paul recalls Roger saying, “nobody remembers stuff that ended up in the dump 30 years ago. Everything that was made well is what is still around.”

With 90% of upholstery — anything with fabric including chairs, sofas, and recliners — created in the United States and hundreds of fabric options, Erickson Furniture strives to sell quality furniture even as the number of family-owned furniture stores dwindles.

“The number of furniture stores in Minnesota is down 60-70%, but the stores that are still here are a lot bigger,” Paul said. “People travel to Medford and the cities. It’s not hard to compete with bigger stores on price or service, but it is harder to get people in the door. It’s easier to compete with someone next door to you than someone that is 50 miles away.”

While the square footage of a store may be larger to accommodate more in-store selections — 16,000 compared to 80,000 to 150,000 square feet — Paul believes buying products locally is a better experience for customers than shopping at major furniture stores.

“Locally, you know the people,” Paul said. “You know the salespeople. If there’s a problem, you can talk to a salesperson, you can talk to me. I believe it’s easier to make a decision over a few days rather than being up in the cities and thinking ‘it’s on sale and we’re here, let’s just do it.’”

What is built with a sturdy foundation is what is remembered from the past. Much like a sturdy frame and quality fabric can seat a family around the dining table for years, the Erickson Furniture lineage of selling furniture dates back to 1915.

The foundation of Erickson Furniture

Oscar Erickson was 28 years old in 1921, when he bought the furniture store started by his uncle, Charles Peterson, in 1915. Oscar is Paul's grandfather.

“My grandpa purchased a store in Evansville,” Paul said. “He ended up becoming a mortician along with owning a furniture store.”

Furniture store owners in the early 1900’s often operated funeral homes, too. While Oscar completed his mortician’s license, his brother, Loren Erickson, along with their father, ran the furniture store.

Loren soon became a co-owner of the Erickson Furniture business in 1925 and the two brothers bought another store in Elbow Lake, Minnesota. In 1928, they again expanded to include a store in Frazee. With the third store, their third brother, Vernon Erickson, joined the business to make Erickson Furniture a true family endeavor.

Paul’s grandma, Florence Erickson, also helped with the store on occasion when Oscar had a funeral, though Paul said she was more inclined toward music than sales, directing the church choir for years.

“In the late 20s my grandpa and his brothers bought a couple of other smaller stores and they ran them for a while. That was kind of the start of the Great Depression,” Paul said. “They ended up buying a furniture store in Willmar, Minnesota and that ended up being their main store 1932 — not exactly a good time to start a store.”

As the other furniture stores were sold, the remaining stock was hauled to Willmar.

“They were just trying to make a living and these other stores were not making it,” Paul said. “They bought them for the inventory.”

Despite the Depression, Erickson Furniture became one of the leading furniture and appliance stores in Minnesota.

During this time, the three Erickson brothers discovered their names — Loren Oscar, and Vernon Erickson — created the acronym LOVE. Heart-shaped tags with the words “Quality Furniture, the Heart of Your Home” soon followed and the trademark is still used at Erickson Furniture today.

In 1933, a deal was struck between the three brothers. Oscar and Vernon took full ownership of the Willmar store and Loren ran the Elbow Lake store. While the furniture store in Elbow Lake was sold after Loren retired in 1963, the funeral home he built there still bears the Erickson name as Erickson-Smith Funeral Home and Cremation Service.

“The Willmar store was pretty successful, but my dad knew there was not going to be a spot for him — Vernon was 17 years younger than my grandpa — so in 1956 he bought a store in Faribault,” Paul said. “He just knew he wasn’t going to end up in Willmar so every Sunday so he looked at the want ads for furniture stores for sale in the business opportunity section, which was very common back then. He looked at several other stores in other towns, but he obviously liked Faribault because he bought the store.”

Roger’s first store in Faribault was located where Bernie’s Grill is now on Central Avenue. After four years he moved the store to where NAPA Auto Parts store is now located on First Avenue NW.

“From there in 1968 he bought this building [located at 30 Fifth St. NW] from Bob Bliss,” Paul said. “He was expanding; he did really well.”

Paul’s time in the store in his youth wasn’t always spent working though.

“When I was a little kid, we’d come down here every once in awhile with dad’s friends from out of town and I’d play hide-and-go-seek with their kids. There’s plenty of places to hide.”

After college, during which Paul delivered furniture for Roger, Paul bought Erickson Furniture.

“I bought Dad out in 1992,” Paul said. “It was a little overwhelming. I sat next to him for 10 years knowing exactly what I was going to do, but it was my decision all of a sudden. I thought I was working as hard as I could, and I found out I had one more gear I hadn’t used. You have a little bit more drive when you’re writing the checks.”

Paul's got one word to describe what it was like to work alongside his father: "wonderful.”

Reporter Renata Erickson is a freelance reporter based in Faribault. ©Copyright 2019 APG Media of Southern Minnesota. All rights reserved.