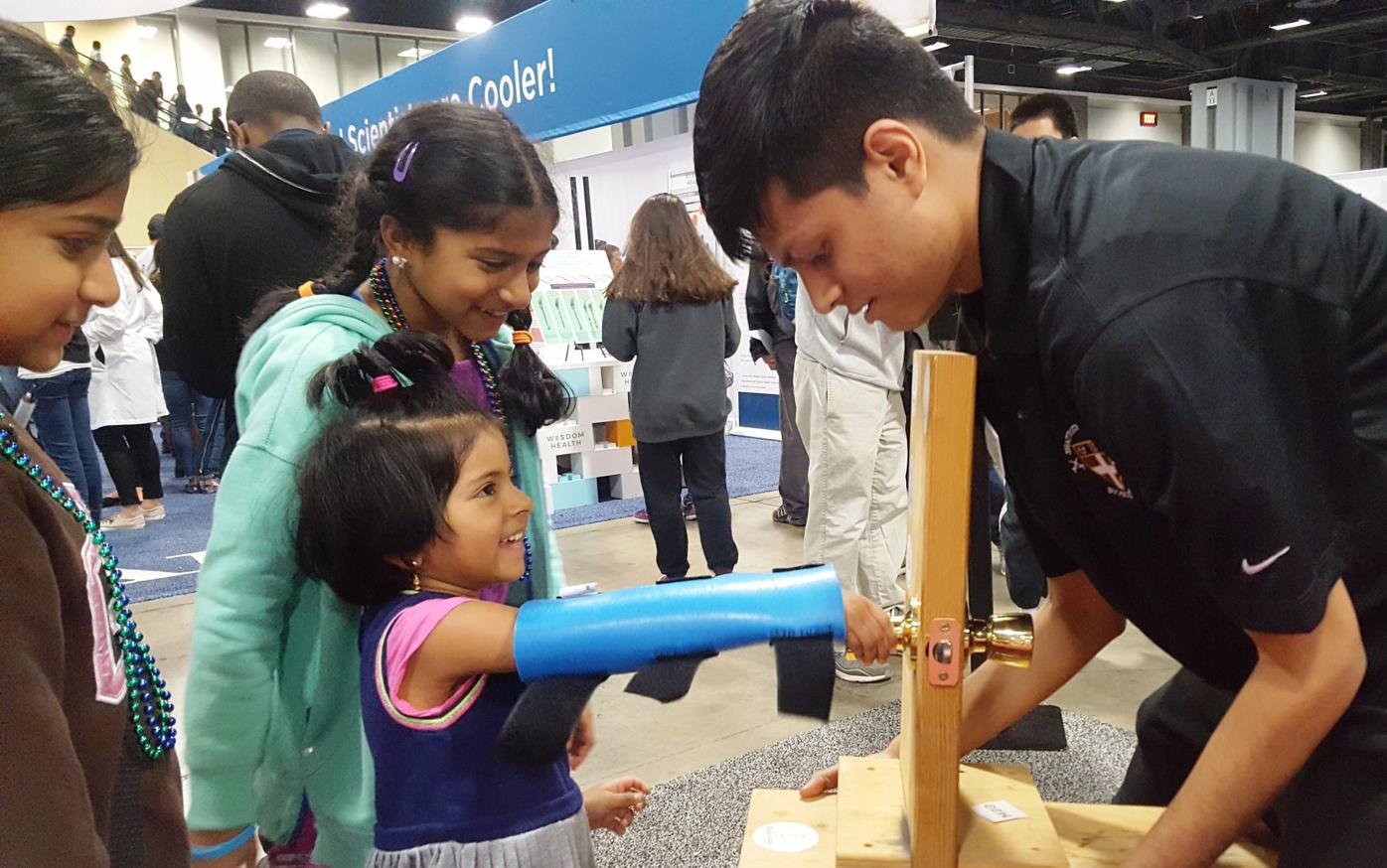 Shattuck-St. Mary’s student Barat Sikder shows off a piece of equipment that helps kids simulate what it is like to not have human joints in their arms, making tasks like opening a door knob difficult. (Photos courtesy of Shattuck-St. Mary’s) 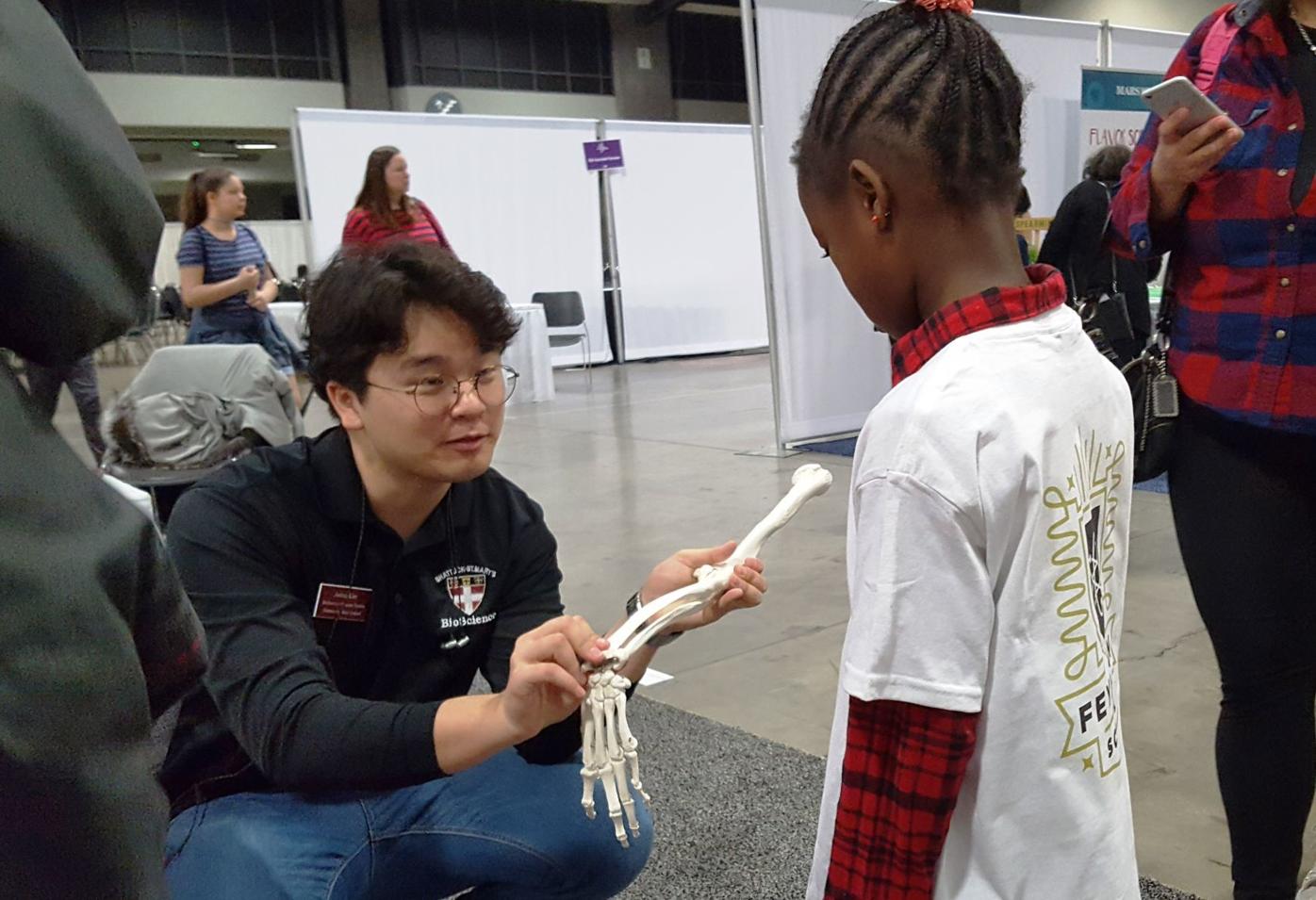 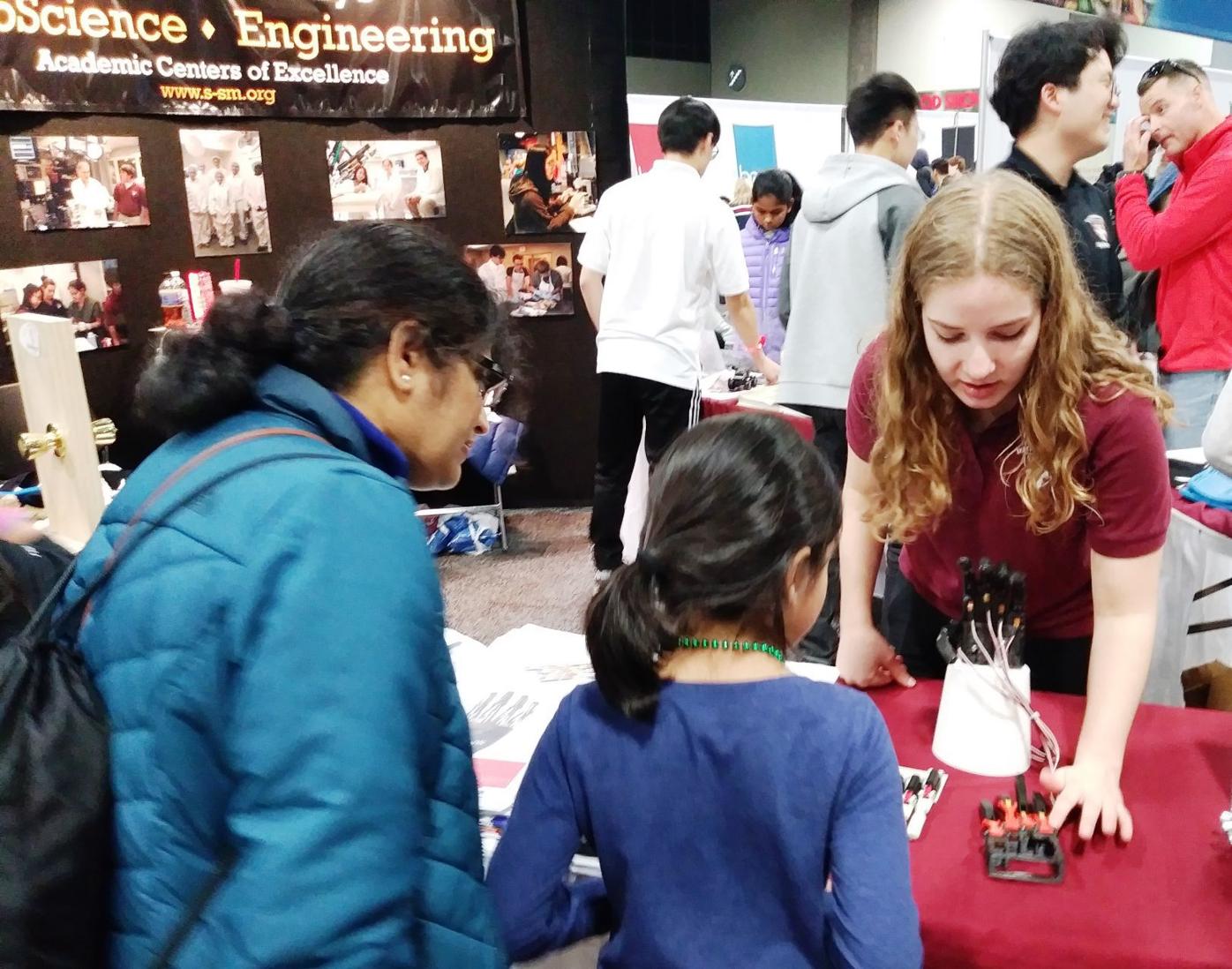 Shattuck-St. Mary’s student Barat Sikder shows off a piece of equipment that helps kids simulate what it is like to not have human joints in their arms, making tasks like opening a door knob difficult. (Photos courtesy of Shattuck-St. Mary’s)

The Shattuck-St. Mary’s students who attended a national conference in our nation’s capital last weekend discovered inspiration is a two-way street.

The 30 biological science and engineering students, along with a sampling of staff members, attended the two-day festival held at the Walter E. Washington Convention Center in Washington, D.C. It was the fifth annual USA Science and Engineering Festival featuring over 3,000 hands-on exhibits.

Shattuck-St. Mary’s students in attendance were in awe of companies like Boston Scientific and NASA which boasted massive, interactive exhibits to feed the minds of the thousands of children who attended the conference.

However, the Faribault-based students also inspired a younger generation of students at their own booth, which raised awareness for SSM’s Engineering and BioScience Centers of Excellence programs.

Convention attendees from SSM were juniors and seniors, who took in all the sights and sounds.

Mike Boone, an instructor at SSM, said many of the students were impressed by the convention’s offerings, saying, “There was so much there. It’s hard to pick one or two [highlights].”

The students and faculty from SSM spent their first day in the capital listening to neurologists, NASA scientists and engineers. Misa Patal, who was part of the SSM contingent, said she found two speakers particularly engaging.

“Two of them were polar opposites of what you can do with science,” she said. “One was a NASA scientist. Another said you don’t always have to solve the world’s problems with math and science, but it can be fun and exciting.”

The students had their time to peruse the conference, but were also expected to spend some time at the SSM exhibit to teach young attendees. During the first day of the conference, a Friday, the convention was filled with school-aged students who came in throngs of yellow buses.

There, the SSM kids demonstrated science experiments and walked kids through some activities as well. In one activity, Lucy Hong said, “We had to explain to kids why cows don’t wave.”

What she meant is that humans have a joint in their arm that allows them to do small movements like turning a door handle, so the SSM students created a device that simulates what it would be like if you couldn’t make that movement.

Hannah Rahn was another SSM student who attended. She explained that the teaching aspect of the convention was particularly inspiring.

“I felt like a role model teaching the kids and got motivation from them,” she said.

Patal agreed, saying, “It was a huge inspiration to come back and be with people who were really interested in this field.”

According to Boone, the chance to sample the food, culture, climate and history of Washington, D.C., was an important part of the trip.

Nathan Lipton was particularly impressed during his tour of the Capitol Building and was left in awe when he saw the House of Representatives Chamber and the statues erected of the legends of each state that fill the building.

In addition to the history of the city, the students also arrived at a good time as spring-like weather brought about the bloom of D.C.’s famous cherry blossoms, which Hong said was her favorite part of the weekend.

Boone was impressed with the way his students handled themselves and said they were often mistaken for someone older.

“When families came up to see what we were doing, they think we are a college because of our kids and our specialized program,” he said. “It’s always exciting for me to hear that and exciting for the students to see that, too.”

'I felt like a role model teaching the kids and got motivation from them.'