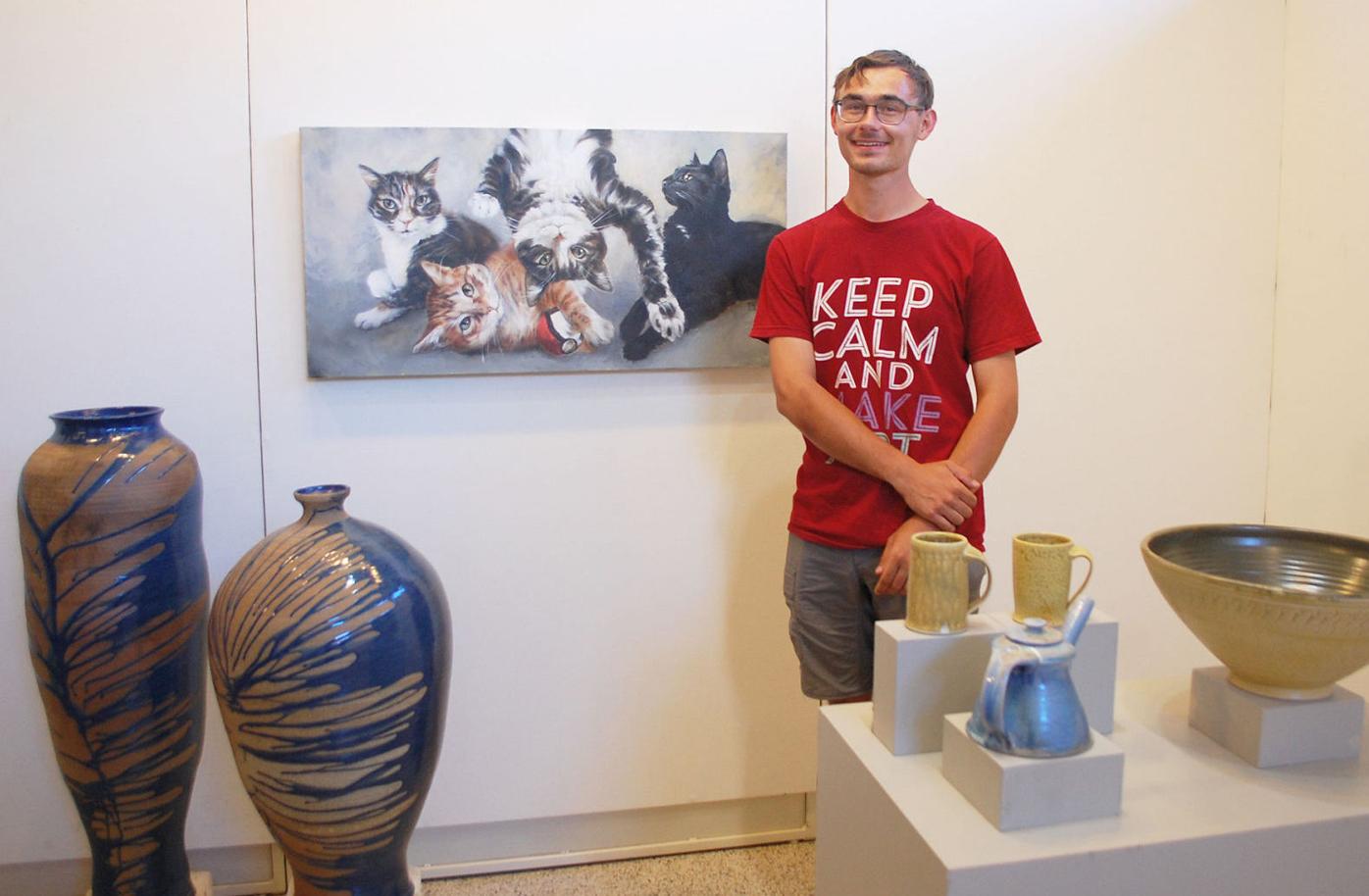 Shawn Bagley stands next to his pottery at the Owatonna Arts Center. The two large vases on the left were made by attaching five hand-thrown sections together to reach their final height. Bagley thinks he could complete a project of that size again with as little as two sections. His years of experience have allowed him to throw higher and thinner than he once could. (Ashley Rezachek/People’s Press) 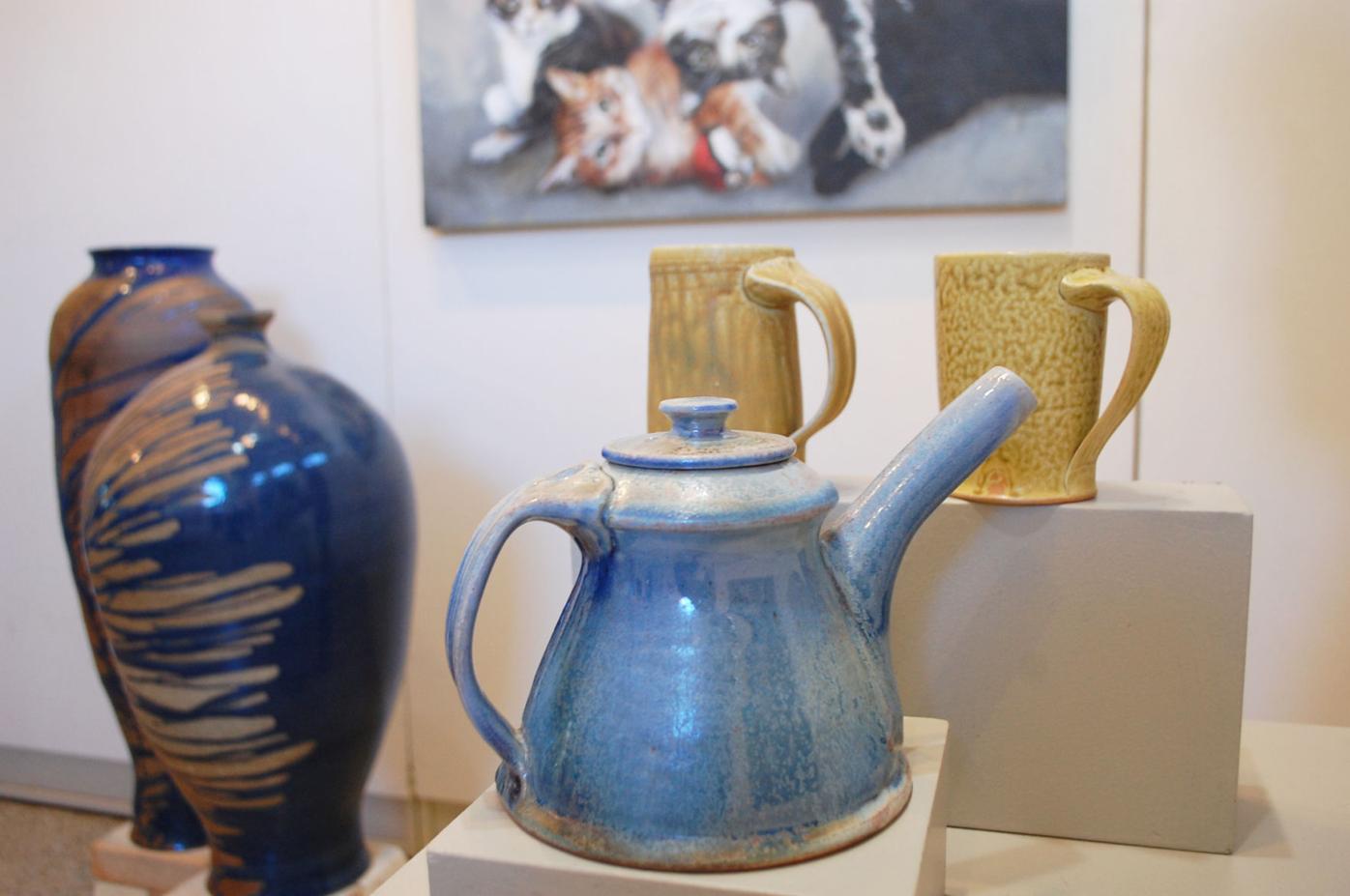 Shawn Bagley really enjoys making handles. A teapot and mugs show Bagley’s technique of attaching the top of the handle to the vessel and pulling it to attach to the lower side. He aims to make the handle aesthetically pleasing as well as functional. (Ashley Rezachek/People’s Press) 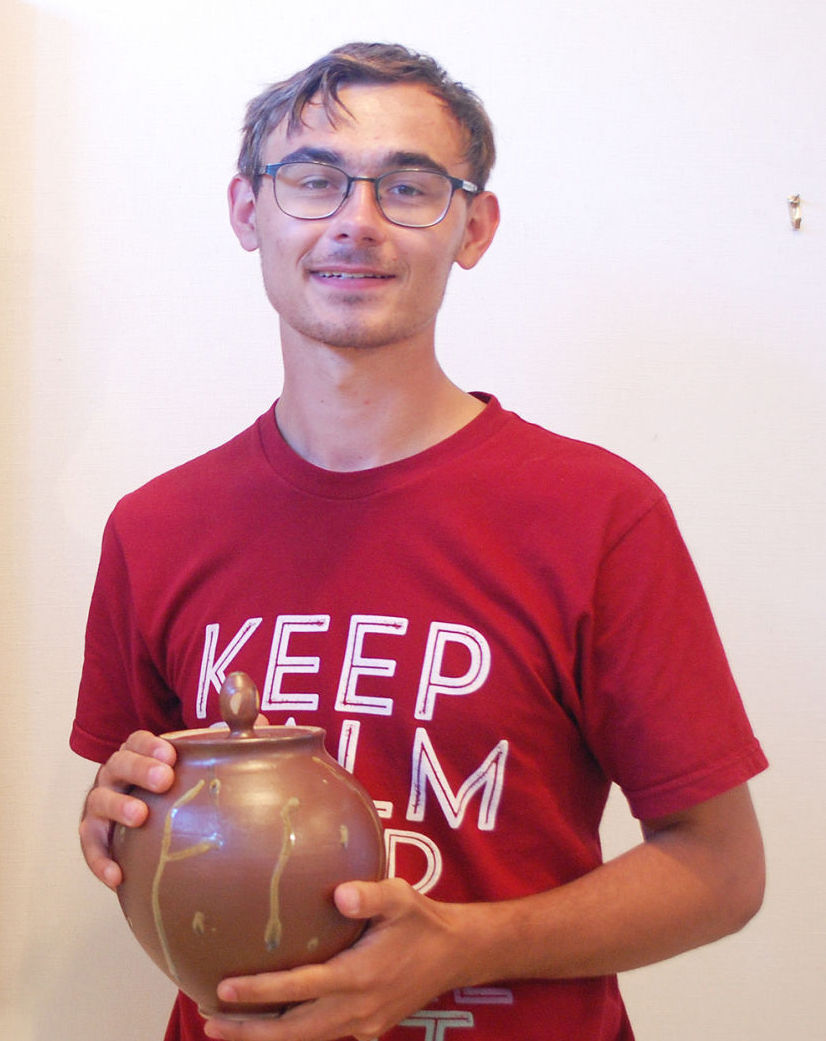 Shawn Bagley holds one of his vessels. He is showing alongside painter Lynette Yencho at the Owatonna Arts Center. With seven to eight years of experience Bagley has made his pieces thinner and lighter. (Ashley Rezachek/People’s Press)

Where art and functionality meet you can find pottery, and where pottery is, you are likely to find Shawn Bagley.

The St. Peter resident has been honing the craft for seven to eight years and will be showing his ware at the Owatonna Arts Center from Aug. 2 to Aug. 30, alongside Owatonna resident and painter Lynette Yencho. This is the third art show for the 23-year-old potter.

Bagley says he has always had an artistic side, including playing with the art of drawing and photography. In high school he attended the Minnesota New Country School in Henderson, a charter school focused on project-based learning. It was at school where he first witnessed a student throwing a vase on the wheel.

“That was something I saw and thought ‘wow, I want to give that a try,’” Bagley said. “I became hooked. I kind of fell in love with the whole process of making pottery.”

His junior year project was focused on pottery. He spent around 200 hours on the project. Bagley is a visual learner. At night he would watch YouTube tutorials on the art form and try out the techniques at school the following day.

Bagley has been renting space at the Arts Center of Saint Peter, which has both a studio space and gallery space, for about two or three years. At one point it was suggested that he display his work in a show of his own. On Monday, he started setting up his gallery at the Owatonna Arts Center, after recently taking down his gallery at the Paradise Center for the Arts in Faribault.

“I want to keep on doing shows and I want to do exhibits, but then also do shows where you can sell,” Bagley said.

He hopes to eventually participate in the invite-only St. Croix Valley Pottery Tour. The annual pottery sale event is typically held in early May and features multiple well known potters.

“It’s something that I can work toward,” Bagley said of the tour.

Bagley enjoys making vases, mugs, items with handles and vessels with lids. He begins his process by determining how much clay he needs and begins wedging it, which he describes as similar to the technique used for folding bread dough. This step will help remove any air bubbles trapped in the clay and make the clay stronger for when he throws it later.

Next he centers the clay on the wheel.

“Centering took me a while, it took me about a year before I felt like I could center it,” Bagley said.

With some water to prevent the clay from sticking to his hands, Bagley pushes the material to the center of the wheel and creates an opening hole while making sure to avoid hitting the very bottom. He begins to pull the clay outward and shape the ware. For vases, he uses a tool called a rib to help shape the curves in the clay.

The piece is then dried and put into the kiln for the first firing. Firing strengthens the clay, while maintaining its porous state, which absorbs any applied glazes.

There are several types of glazes which can be used. Some are commercial grade which are more predictable in their outcome. Other glazes are made by the potters themselves. Different glazes require different temperatures during the second firing.

He hopes to learn more about making glazes when he heads to Minnesota State University, Mankato this fall to get his bachelor’s in ceramics.

“I’m excited about that because that’s where I’ll learn about the materials that are used in making the glazes.”

“Wood firing is probably my most favorite way to fire and to finish pottery because it has to do a lot with the surface of the pieces,” Bagley said.

As the name suggests, the kiln uses burning wood as fuel. A continuous supply of wood needs to be thrown in. Wood firing usually takes 48 hours or more to complete a firing, meaning potters have to take shifts watching the fire.

The kiln creates a natural draft which pulls the heat through the clay and to the chimney. Using a tool called a pyrometric cones a potter is able to visually determine when the kiln reaches the desired temperature. The cones come in a variety of ratings, and bend depending on the temperature.

Bagley draws inspiration from going to pottery events, such as the St.Croix Valley Pottery Tour and the Minnesota Pottery Festival, to see what other potters are making. He also follows other potters on Instagram and tests out their techniques and ideas.

He has been given the opportunity to demo his work for others at a local school and has been asked to teach a class at the Paradise Center for the Arts. Although selling his work is the future he would like to see for himself.

“Thanks to Silvan and the Owatonna Arts Center for having me and Lynnette, for allowing me to show alongside her,” Bagley said. “I’m excited for the future being able to go through my BFA. I’m excited to learn as much as I can.”