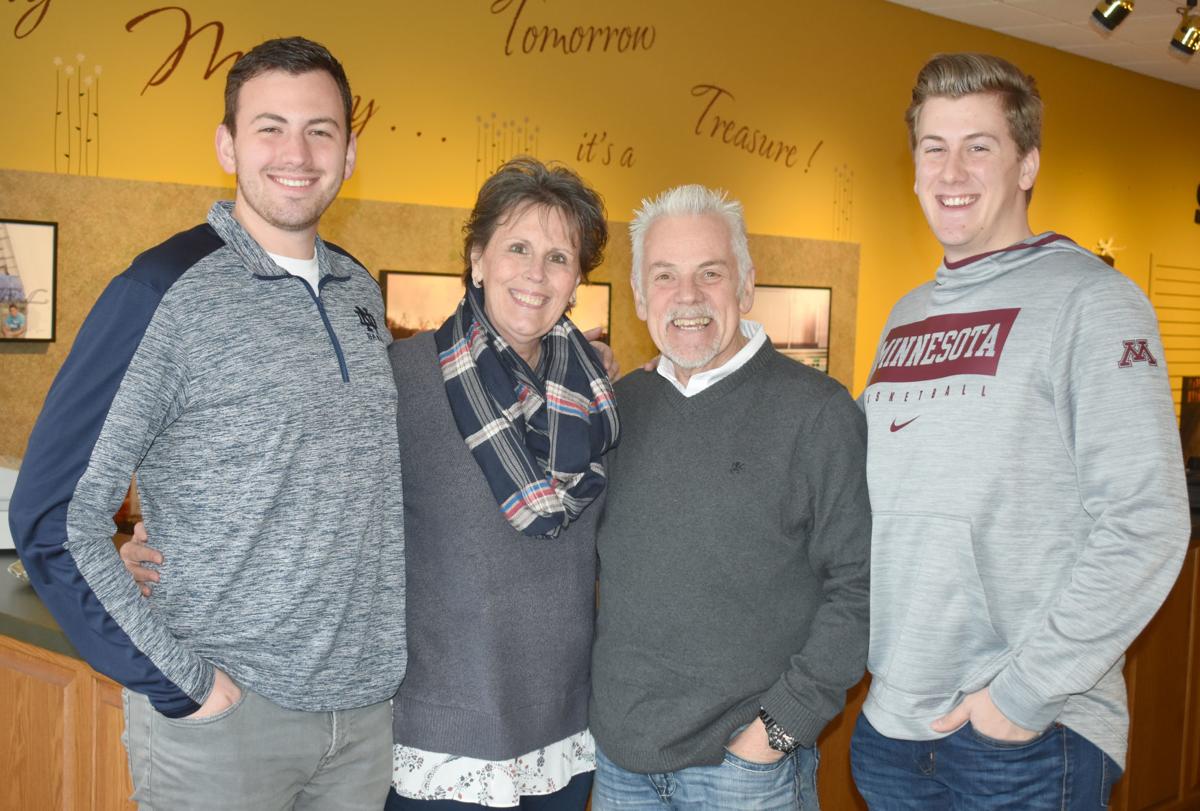 Paul Swenson, second from right, poses with his family inside his photography studio at 327 Central Ave. N, which closes this Friday. He’s pictured with his wife Chris and sons, David, left, and Patrick. (Misty Schwab/Faribault Daily News) 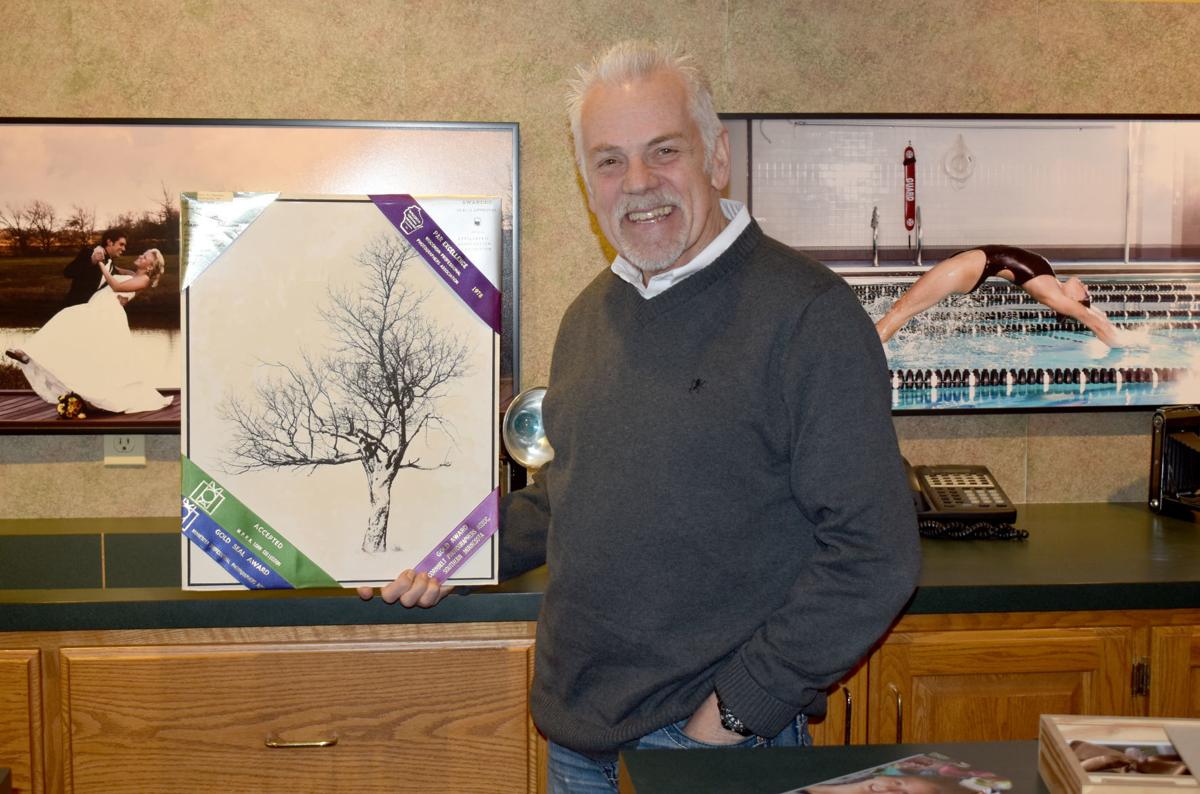 Paul Swenson has taken photos most Faribault residents can find in their homes, including wedding and sports. Here he holds one of his award-winning photographs from 1978 in his studio, which closes Friday. (Misty Schwab/Faribault Daily News)

Paul Swenson, second from right, poses with his family inside his photography studio at 327 Central Ave. N, which closes this Friday. He’s pictured with his wife Chris and sons, David, left, and Patrick. (Misty Schwab/Faribault Daily News)

Paul Swenson has taken photos most Faribault residents can find in their homes, including wedding and sports. Here he holds one of his award-winning photographs from 1978 in his studio, which closes Friday. (Misty Schwab/Faribault Daily News)

Three generations of Faribault families likely have a Paul Swenson photograph in their homes, whether it’s a first-grade picture for the yearbook, an outdoor shot of a newly married bride and groom or a picture of a newborn baby.

“When our oldest turned 1, we had a litter of chocolate lab puppies, and Paul let us bring them in for the photos,” recalled Cathy Cap.

“Paul went the extra mile to get a picture with our family that included a local business,” said Kari Carter, another client. “The smile on the family member’s face when the surprise was unveiled was priceless. As well as Paul’s smile with the joy it brought to our family!”

Said Danielle Maas: “Paul did all my sports photos from the time I was 8 all the way until 18. He also did my senior photos! He did amazing work and I cherish all the photos/memories.”

After over 43 years in business, Paul closes his photography studio in downtown Faribault Friday. He isn’t retiring so much as “cutting back” in his profession, which has changed significantly throughout his career.

Paul’s portrait studio didn’t only handle photography in the early years but also sold cameras to help build the business. Clients could get their photos finished and developed at the store, but as photography evolved into a digital medium, the amateur market of dropping off film changed significantly.

Paul hired a number of employees over the years, including one of his best friends, Shelly Angell-Gravgaard, who did graphics and retouching work for about 25 years . Other appreciated employees were high school students, who to this day tell Paul their work at the studio was the best job they ever had.

Paul’s wife Chris, a Faribault native, joined the studio staff in 1995, the same year they married. Chris handled a variety of responsibilities on the business and financial end of the studio until 2011.

“We were very blessed because the studio was successful enough that we could have both of us here at the same time while the kids were in school,” said Paul. “It was very much a blessing for me and the boys that [Chris] could both be here [at the studio] and be at home when they needed her.”

A right of passage

Paul photographed students and staff every fall at local schools, both public and private. He often warned administrators he wasn’t the fastest photographer, being the type who took time to make the experience personal for each student. One of the most rewarding comments he’s heard came from a little boy in a checkout line who told his mom, “That’s the camera guy!”

“The thing that was probably the most fun doing was the senior photography,” said Paul. “And that’s also changed drastically.”

Chris recalled when getting senior pictures taken was an expectation across graduating classes.

“It used to be a right of passage to get senior pictures taken,” said Chris. “The boys enjoyed it as much as the girls did.”

To help make the photos more personal for seniors, Paul met with his clients for a consultation beforehand to learn about their interests and personalities. Over the years his clients have included cars, horses, turkeys and even a boa constrictor in their senior photos. He remembers one senior’s mother brought a newborn calf to the studio for the photo session. For about seven years, Paul also took photos in a loft studio on the second floor of his building, offering a rustic setting.

Changing lifestyles and photography processes didn’t discourage Paul so much as it planted a seed of creativity.

“It seemed like every year we tried to reinvent the wheel, which kept us from getting stagnant,” said Paul. “… People also realized we were really open to doing what they wanted to do [for senior photos].”

The biggest change in the photography industry during Paul’s career was the shift from film to digital photography. He knew of many professional photographers who closed their studios around 20 years ago, disinterested in relearning their craft with an unfamiliar process. But Paul decided to change with the times.

Chris pointed out that cell phone cameras also changed the way society thinks about photography. The skills once attributed to a professional photographer are now executed with the push of a button, she said.

Paul remembers only taking notes the first three weeks of photography school, as actually using a camera required a thorough understanding of lighting, exposure, color processing and transparency. Photography was a respected art form, he said, and people were surprised to learn how much he relied on mathematics in the process.

“That’s what impressed me: the whole art form behind it,” said Paul. “All that’s changed.”

Even with the evolution of cameras, Paul recognizes photography still requires being at the right place at the right time, knowing how to pose subjects and capturing the best lighting. And while the digital era allows photographers to snap tons of photos and select the best ones, Paul prefers getting it right the first time.

End of an era

After closing his studio, Paul will continue taking photos for high school sports teams until the end of the academic year. He’ll explore his options after that, but full retirement isn’t in the cards yet.

“The bottom line is I have no regrets,” he said. “I got to work a job I loved and never really had to grow up, but now that it’s come to an end, I don’t want anyone to feel bad for us because it wasn’t that long ago every town had its best buggy whip maker.”

Paul accepts that photography studios like his own served clients during a particular era that has come to pass. The saddest part, for him, is thinking about lost memories — the photos stored on discs, accidentally deleted and forgotten until years down the road when people wonder what happened to them.

Paul himself doesn’t want to discard the portraits he took throughout the years, considering each one a piece of himself. Luckily, Sue Garwood of the Rice County Historical Society agreed to prepare a spot for 230 boxes worth of photographs Paul took.

“Take pictures and do something with them,” said Paul. “Guard them; they’re memories today and treasures tomorrow.”

Throughout his career, Paul Swanson's photography earned him recognition beyond Faribault and his work has even appeared in "Sports Illustrated."