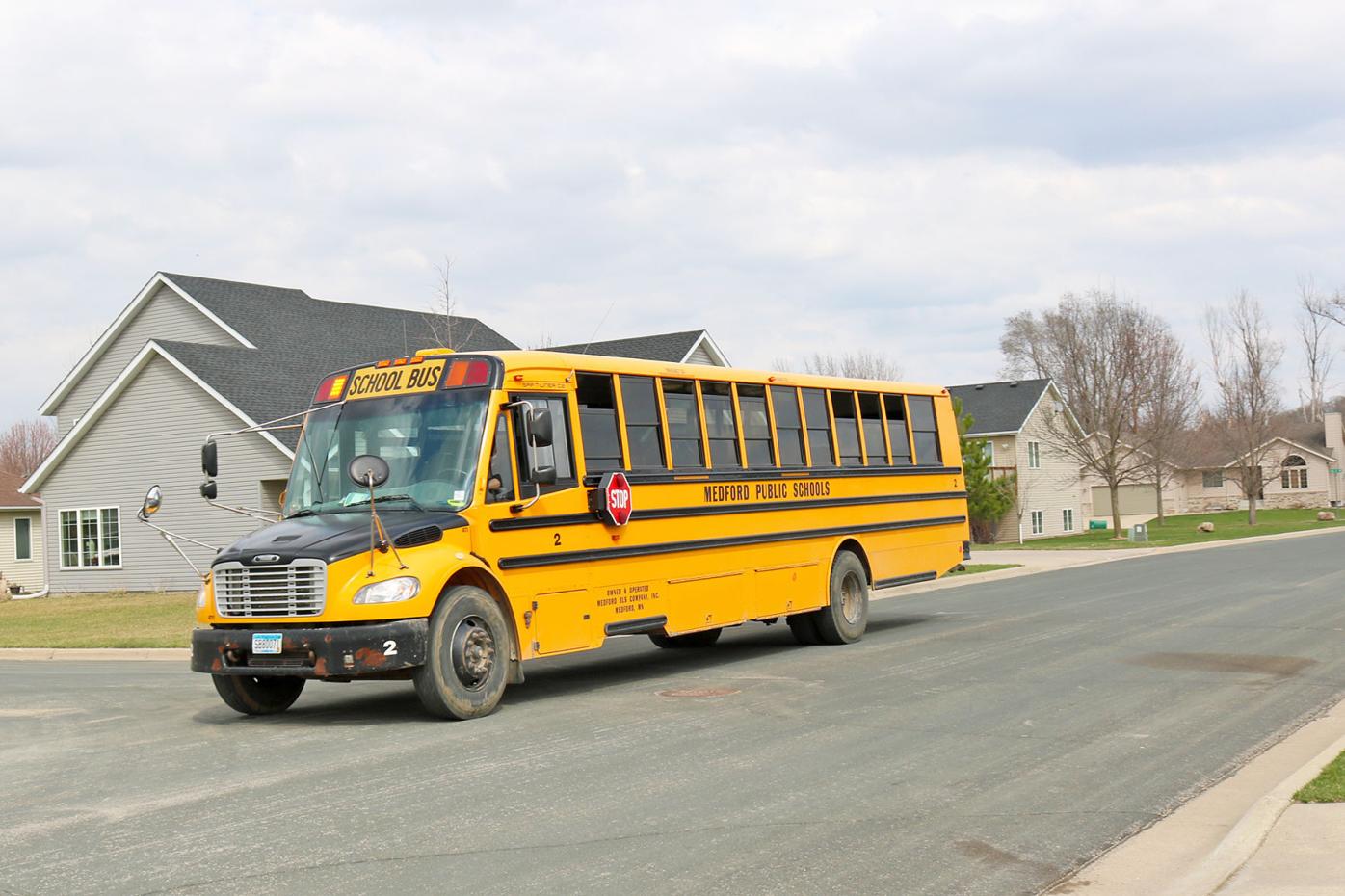 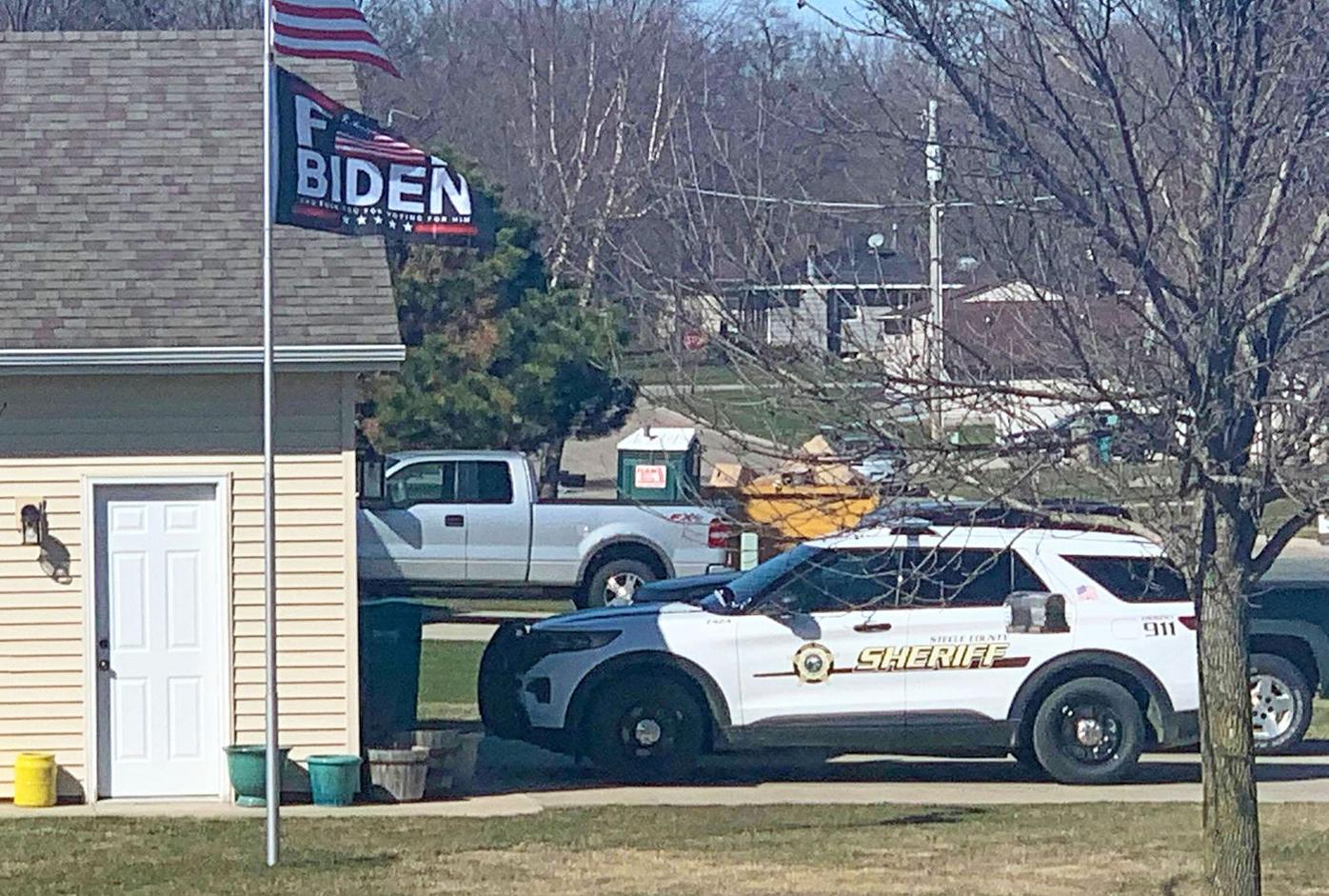 A Medford neighborhood woke Friday morning to see a profanity-laced anti-President Joe Biden flag in a yard next to a Medford school bus stop and a Steele County Sheriff’s Office squad car parked in the driveway underneath the flag.

The flag stating, “(Expletive) Biden and (expletive) you for voting for him,” has resulted in an internal investigation at the department and sparked a conversation in the neighborhood about when free speech goes too far.

By noon Friday, the flag at the deputy’s home had been removed. Sheriff Lon Thiele said the incident is currently under investigation but it was disappointing that the flag was seen near a squad car.

“That’s not the view I want children to see from their Sheriff’s Office,” Thiele said. “Freedom of speech is what our forefathers wanted and put in the Constitution, but we want [the department] to be seen in a lot better light than this negative message.”

Jeff Wetmore, who has lived in Medford for 30 years and identifies himself as someone who “just doesn’t get into politics with people,” said he felt both anger and frustration to see the flag at his neighbor’s house.

“I just don’t think it’s right,” Wetmore said, adding that he is thankful his own children are of ages where he doesn’t have to explain it to them. “Regardless of the political tone of what side of the aisle you want to be on, I was angry that there’s an F-anybody sign or flag even out there, let alone in a neighborhood with kids everywhere. It just seemed vulgar to me.”

Though the profanity found in the flag was upsetting for Wetmore and his neighbors, Wetmore said it caused him to question if he would be treated differently by law enforcement if he identified as a member of a specific political party.

“You can’t help but wonder that – and I would feel that same way if the flag said ‘F-Trump,’” Wetmore said. “If someone has that strong of an opinion, I don’t know how you could not feel like they might treat you differently if you think differently than them. How could anyone not think that?”

Thiele asserted that the flag does not represent the views of the Sheriff’s Office and that no resident of Steele County should fear unfair treatment from local law enforcement.

“No member of law enforcement is going to be pulling people over for their right to speak their mind,” Thiele said. “Not in my office they’re not going to.”

This particular flag has gained public attention throughout the nation, with various people flying it outside of their homes and upsetting neighbors for its profanity. Though some people may consider the flag offensive and publicly indecent, University of Minnesota Law Professor David Schultz said it is protected by the First Amendment.

“Courts are always going to err on the side of you can say what you want to say,” Schultz said, citing court cases Brandenburg v. Ohio and Cohen v. California as two landmark U.S. Supreme Court decisions that set a precedent for interpreting the First Amendment.

“After these two cases, you’ve got a pretty broad leeway in your private life to say what you want,” said Schultz, who is an expert in First Amendment law. “When it comes to your private life, and especially in this case where it was displayed on private property, while it can be distasteful and maybe not a good thing to do, at the end of the day the First Amendment will protect it.”

Despite the language in the Sheriff’s Office workplace policies, Schultz said the fact that the department is a public employer complicates the type of disciplinary action that could be taken against the deputy.

“As a public employee, [the deputy] enjoys their First Amendment right of free speech as a citizen. If this was a private employer, it would be a piece of cake and they could fire the employee in a second – no problem – for going against their policy,” Schultz said. Additionally, Schultz said the fact that the Steele County deputies are unionized also limits disciplinary action that can be taken, but union negotiations could provide disciplinary action plans that simplify the employer’s options as well.

This is not the first time language by a member of law enforcement in the region – and free speech – has been called into question. In February 2018, a Rice County deputy was demoted for comments he made on social media while off duty the previous fall about Diamond Reynolds, the girlfriend of Philando Castile who was shot and killed by a St. Anthony police officer during a traffic stop. In October 2019, the Third District Court affirmed an arbitrator’s finding that Rice County was justified in their disciplinary action, stating the demotion was “supported by substantial evidence” and that the deputy himself admitted to several policy violations.

The judge in that case, Judge Carol Hanks, noted in her findings that not all speech is protected and that the Rice County Sheriff’s Office has the right to restrict some speech of its employees.

“The court’s decision does not suggest appellant is not entitled to his own opinions and beliefs,” Hanks wrote in 2019. “However, the manner and context in which those opinions are communicated is not afforded unlimited protection by the First Amendment.”

To speak or not to speak

While the First Amendment affords free speech protections, Schultz noted that there are also ethical considerations, such as the flag’s impact on the neighborhood. It’s all part of a broader debate on how far people should really go to express their views.

“Theoretically we can go an awful long way,” Schultz continued. “But in the interest of civility and getting along, aren’t there perhaps times where we don’t need to push it that hard? There is a great old thing in First Amendment law classes that goes: You have the right to free speech, but sometimes you are just better off not exercising that right.”

Wetmore said that while he is a strong believer in free speech, he was happy to see the flag taken down once the Sheriff’s Office was made aware of how it made some neighbors feel.

“I don’t want the government telling [the deputy] they have to take it down, because free speech is about the government not being able to tell you what you can and cannot say,” Wetmore said. “But that doesn’t mean everything you say is just OK to say, there are still ramifications to your speech. It doesn’t mean you can say everything you want and you won’t be held responsible.”

In Brandenburg v. Ohio (1969), the U.S. Supreme Court found that a man’s remarks about wanting to take revenge on an individual were protected as the language did not “advocate for imminent lawlessness” and that lawlessness was not imminent.

In Cohen v. California (1971), the Supreme Court found that a man’s jacket that displayed an expletive about the draft was protected despite the wording “eliciting strong, hurtful feelings.”