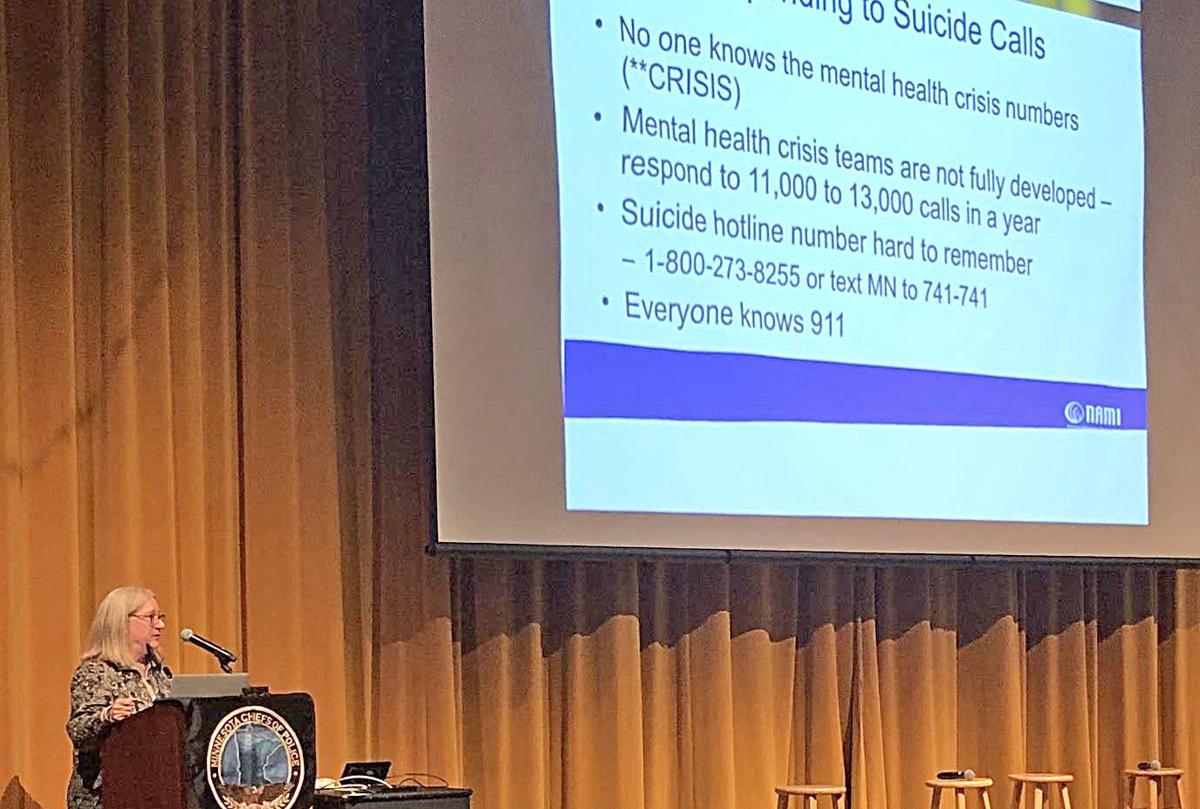 Sue Abderholden, executive director of the National Alliance on Mental Illness, speaks to law enforcement leaders at an event on Dec. 11 in Bloomington. (Jon Collins/MPR News) 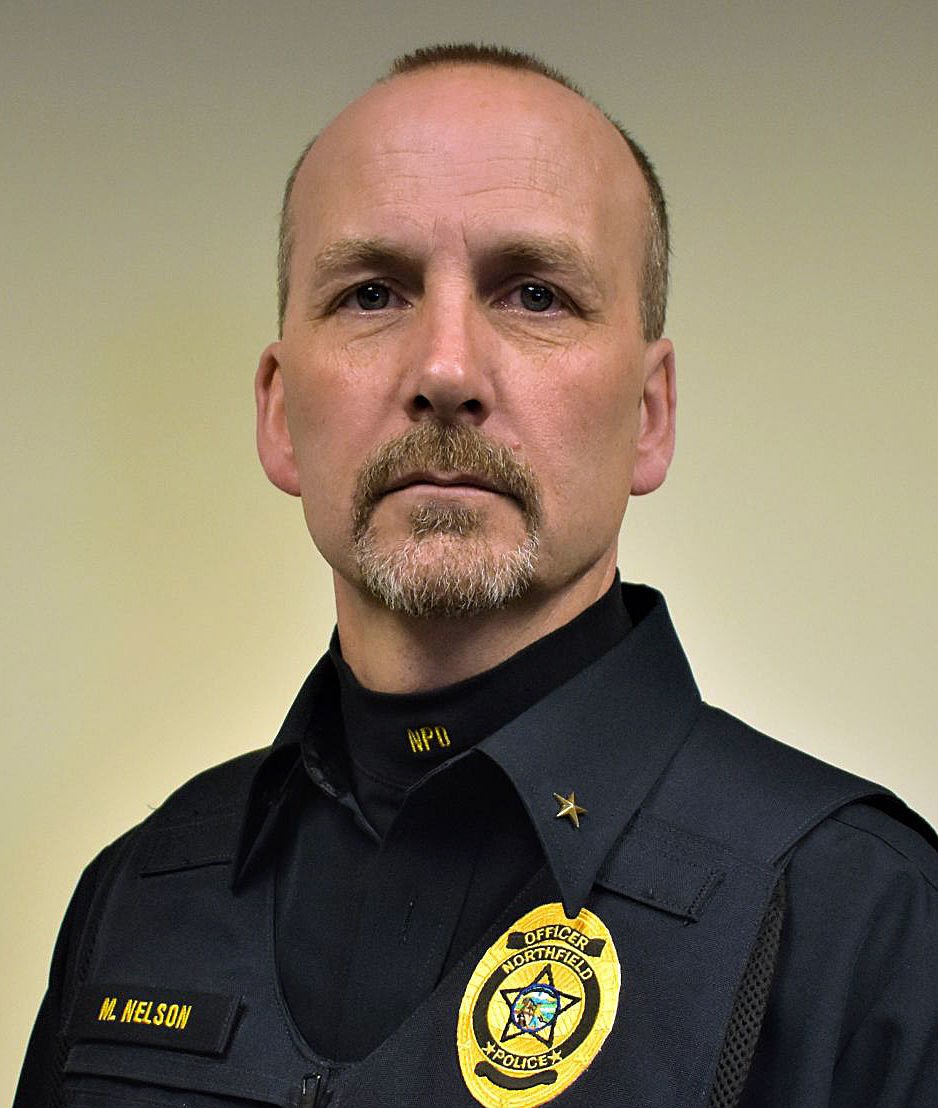 Nearly 200 law enforcement leaders and mental health professionals from across Minnesota attended a conference in Bloomington on Dec. 11 on one of the most controversial topics in law enforcement today: how to respond to suicide calls.

Andy Skoogman, executive director of the Minnesota Chiefs of Police Association, noted that some police departments around the country have shifted how they respond to suicide calls in recent years.

“There are agencies across the country that are simply not showing up or they’re showing up to the call, determining that the individual is not a threat to anyone other than him or herself, and they’re leaving,” Skoogman said. “That’s a drastic departure to how law enforcement has responded to those calls in the past.”

Changes that dramatic haven’t occurred in Rice County, according to County Sheriff Troy Dunn. But thanks to a grant funded from the Rice County Chemical and Mental Health Coalition, area law enforcement are taking comprehensive de-escalation training.

Northfield Police Chief Monte Nelson said training like the one Rice County law enforcement officers took place in earlier this year are invaluable. He said that his department works closely with local EMS and community organizations to help people, and is continues to fine tune its approach.

“This is an evolving subject and (our approach) will continue to change based on best practices, court cases, guidance from federal and state law enforcement and feedback from mental health experts,” he said. “We will keep to keep training our officers and working with legal resources to make sure we’re responding appropriately to these high-risk situations.”

A recent survey by the association of more than 300 chiefs in the state found that fewer than 20 percent of Minnesota police departments referred calls about people threatening suicide to mental health professionals. Another 25 percent of departments had officers leave if they couldn’t make contact with the person having a mental health crisis.

“We’re simply trying to get an understanding of what’s happening in Minnesota,” Skoogman said. “Who is doing what? And what we can do to do better in terms of finding a solution that doesn’t put officers in jeopardy but also helps save a life?”

Many police departments have changed their approach because they fear so-called “suicide by cop,” where officers are called to a scene and confronted by an armed person in a mental health crisis who try to provoke the officer to fire at them.

In some cases, the officers use deadly force. A 2009 study on the issue of “suicide by cop” found that of more than 700 officer-involved shootings nationwide, 36% of incidents were determined to be attempts at provoking officers to use deadly force.

However, what constitutes a “suicide by cop” is a point of contention. Critics say that law enforcement too often use the claim under less than credible circumstances, in order to justify police violence.

Law enforcement say that “suicide by cop” situations can be extremely dangerous and relatively common. Given the risk to officer safety, as well as a belief that police don’t have the proper resources to help a suicidal and desperate person, many departments are taking a different approach.

“An officer wants to go out and help, they’ve taken the oath they want to help people,” Skoogman said. “But in many places, if they’re not the right person to help, how do we connect an individual who’s threatening to kill him or herself with the right resources — there has to be a way to do it.”

The Minnesota Chiefs of Police Association said Wednesday’s event was a first step in addressing the issue. They may consider drafting legislation or getting grants to help departments connect people in crisis with mental health providers who can help.

Dunn expressed optimism that with more training, Rice County Sheriff’s deputies will be able to respond in a safe manner to suicide calls and other difficult situations they now face on a near-daily basis. He also emphasized that reaching out to help those who are struggling with suicidal thoughts can save lives.

“Any help that family members can give us by trying to take their loved ones to the emergency room, to see a counselor or psychiatrist before it gets serious is really important,” he said. “A lot of times families are afraid to take them in or they can’t talk them into it when they see the early signs of depression, anxiety. If it continues to go if untreated, then it can mushroom into a significant event that sometimes results in the person injuring themselves.”

Reporter Andrew Deziel contributed to this report. Reach him at 507-333-3129 or follow him on Twitter @FDNandrew. © Copyright APG Media of Southern Minnesota. All rights reserved.