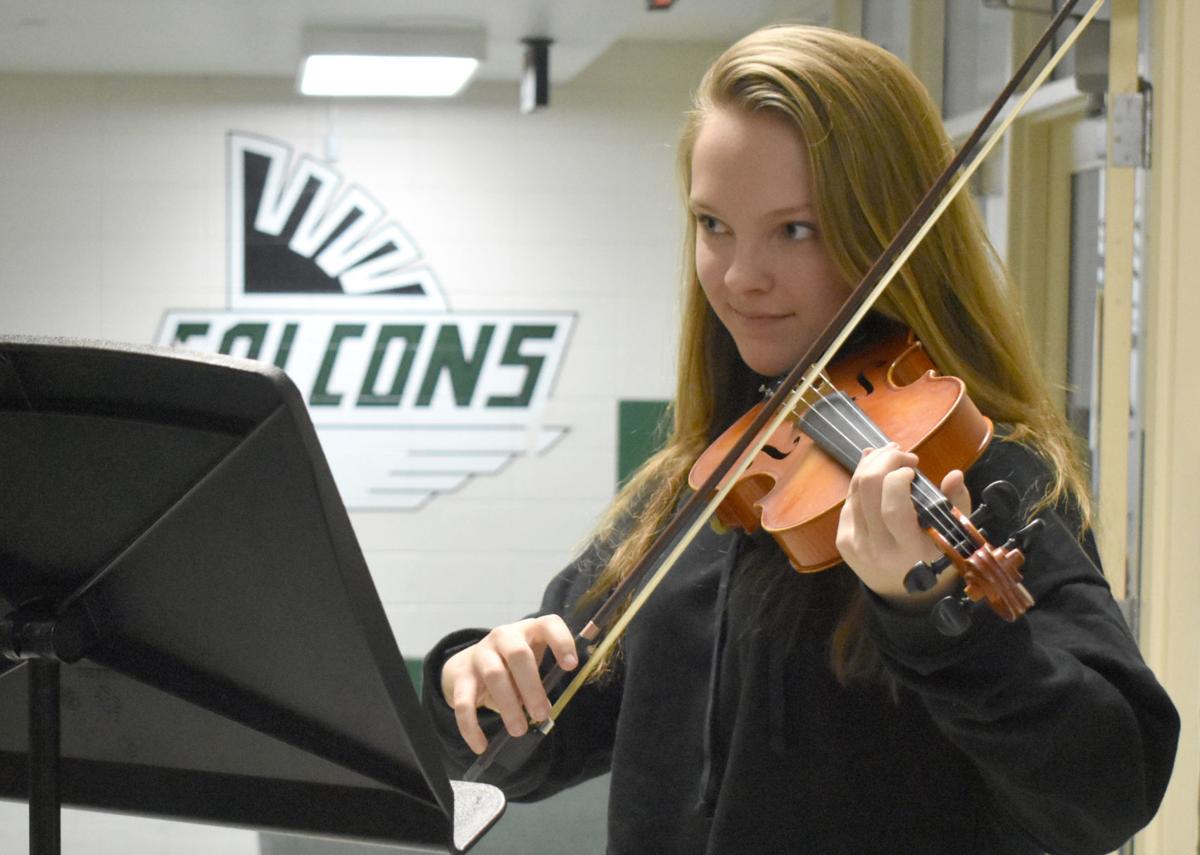 Abigail Brien, a freshman at Faribault High School, will play her violin with the Minnesota Mid-Level Honors Orchestra Feb. 15 at the Minneapolis Convention Center. She was selected among over 100 applicants. (Misty Schwab/Faribault Daily News) 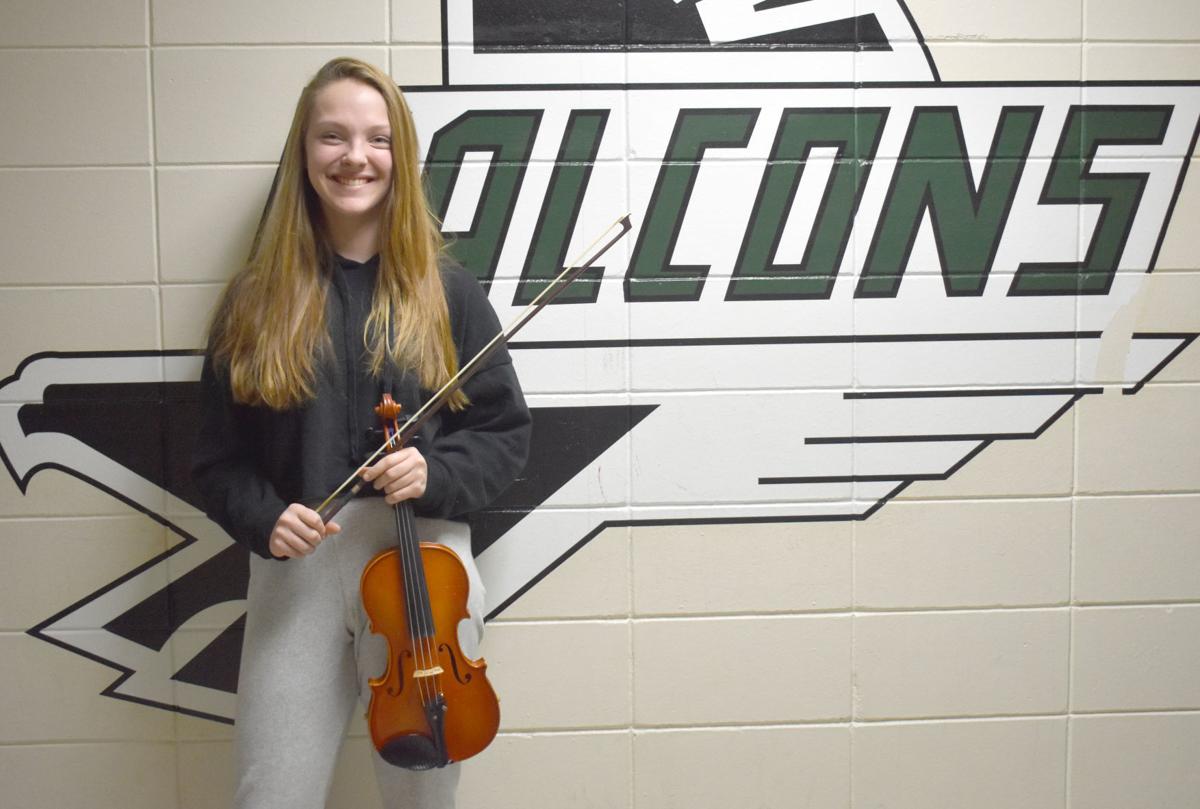 Abigail Brien is a member of the Faribault High School Orchestra but has played the violin since preschool. She was recently accepted into the Minnesota String Orchestra Teacher Association Mid-Live Honors Orchestra. (Misty Schwab/Faribault Daily News)

Abigail Brien, a freshman at Faribault High School, will play her violin with the Minnesota Mid-Level Honors Orchestra Feb. 15 at the Minneapolis Convention Center. She was selected among over 100 applicants. (Misty Schwab/Faribault Daily News)

Abigail Brien is a member of the Faribault High School Orchestra but has played the violin since preschool. She was recently accepted into the Minnesota String Orchestra Teacher Association Mid-Live Honors Orchestra. (Misty Schwab/Faribault Daily News)

Abigail Brien began playing the violin in preschool, so as a freshman at Faribault High, she already has 10 years of experience under her belt.

Brien admits she didn’t like playing the violin in the earlier years. Both her grandmother and mother played the instrument, so her lessons felt more like an inheritance than a personal interest. But that didn’t stop Brien from committing to the violin.

“Thinking about myself in the future, I knew I would appreciate it,” said Brien of her violin lessons. “I wanted to be able to play it when I’m older, and I wanted to play it well.”

Brien’s continued perseverance has proved effective. Over winter break, just before Christmas, Brien learned she was accepted into the Minnesota String Orchestra Teachers Association Mid-Level Honors Orchestra. This is the biggest achievement Brien has landed as a violinist, and for FHS, it’s the first time a student has been accepted into the program.

“It’s just fantastic news to have a ninth-grader selected out of 102 applicants,” said FHS orchestra director Michael Sloane. “This will give her the chance to work with different conductors.”

To apply for the Mid-Level Honors Orchestra, Brien recorded herself playing an excerpt of a required piece, scales and no more than two minutes of a piece of her choosing. For her own selection, Brien chose “Concerto No. 1 in A Minor” by Jean-Baptiste Accolay. Students as young as sixth grade may apply for the Mid-Level Honors Orchestra, but Brien applied for the first time as a freshman.

“I was surprised; I didn’t think I’d get in,” said Brien. “I thought I messed up on my audition recording.”

The orchestra will rehearse just one day, from 8 a.m. to 5 p.m. Feb. 14, before playing for a live audience the following morning at the Minneapolis Convention Center Ballroom. The concert is part of the Minnesota Music Educators Association Convention.

Performing with an orchestra won’t be a new experience for Brien. Aside from her involvement with the FHS orchestra, she’s also performed with the Greater Twin Cities Youth Symphony Orchestra since sixth grade. Within that orchestra are seven levels, and Brien has made it to the fourth level. Many of her closest friends also belong to this group, she said.

“I enjoy [being in an orchestra] more than playing by myself personally because I get to hear all the other sounds, like the cello and bass, with my own instrument,” said Brien.

Playing in an orchestra isn’t too nerve wracking for Brien. She admitted she’s more nervous for her first solo competition through the Minnesota State High School League, even though she’s rehearsed her piece for a while.

Brien recently began learning under the tutelage of Professor Charles Gray, who teaches violin at St. Olaf College. But for the most part, she learned to play the violin from her grandmother, Charlotte Scurry. Brien is thankful her grandmother took the time to give her those lessons.

Only recently, Brien realized that what she enjoys most about playing the violin is tackling fiddle music as well as playing soundtracks of movies like “Fiddler on the Roof” and especially “West Side Story.” And while her initial commitment to the violin was half-hearted, she plans to keep playing the violin.

“It is a goal of mine to get into the seventh level of the Youth Symphony Orchestra and play violin in college,” said Brien. “I also want to make it to All-State as a junior or a senior.”

Abigail Brien performs with the Mid-Level Honors Orchestra 11 a.m. Saturday, Feb. 15 at the Minneapolis Convention Center Ballroom 101A, as a part of the Minnesota Music Educators Association Convention. The concert is free and open to the public.

Brien was one of 24 violinists selected for the honor and 47 total musicians. Nine alternates were also selected.