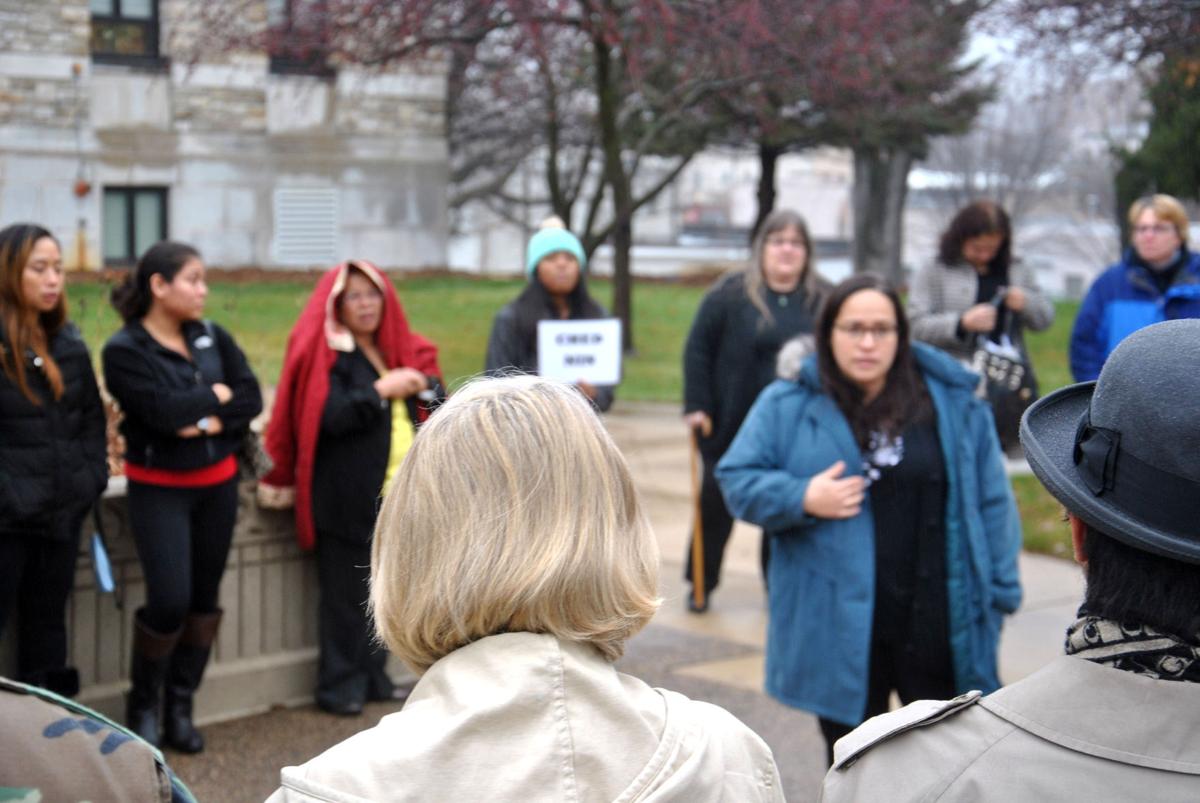 Jenny Srey, wife of Faribault local and Cambodian refugee facing immediate deportation, Ched Nin, speaks to a crowd in support of her family before a post-conviction relief hearing at the Rice County Courthouse. (Ida Mojadad/Daily News) 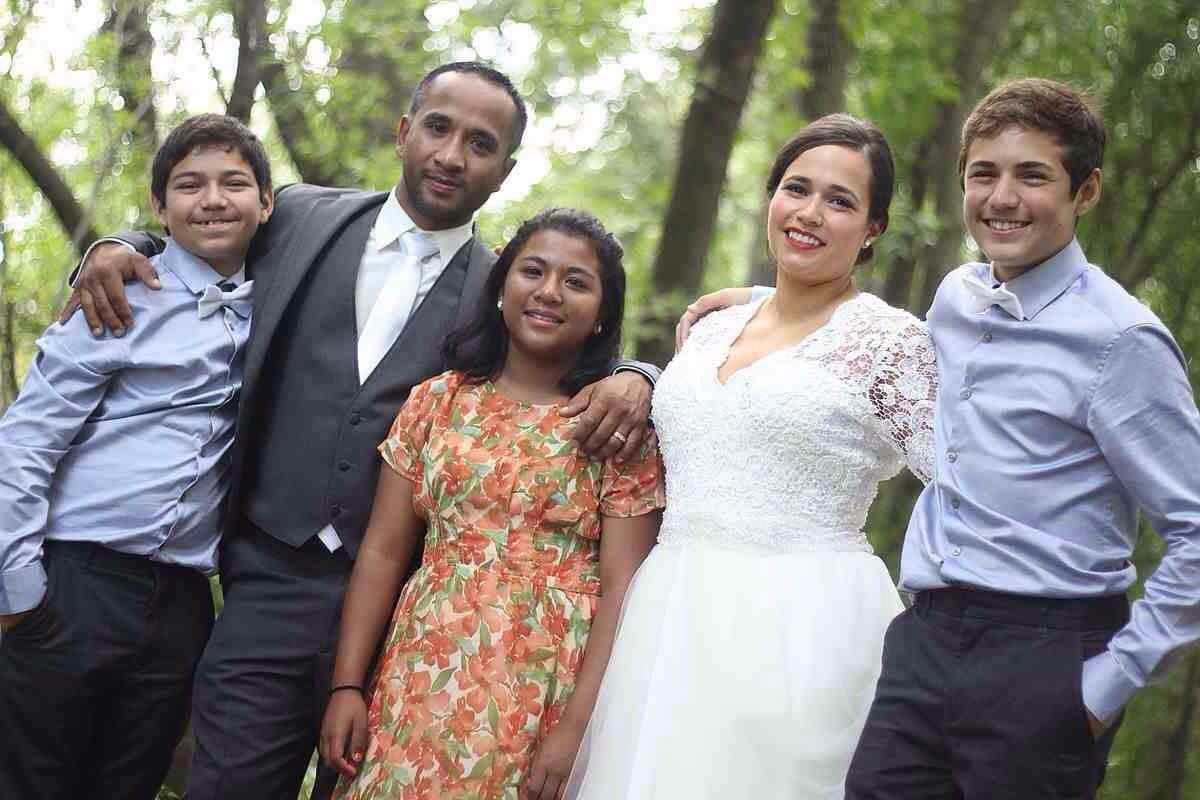 Ched Nin, second from left, and Jenny Srey, second from right, are pictured with three of their children. (Submitted photo)

Jenny Srey, wife of Faribault local and Cambodian refugee facing immediate deportation, Ched Nin, speaks to a crowd in support of her family before a post-conviction relief hearing at the Rice County Courthouse. (Ida Mojadad/Daily News)

Ched Nin, second from left, and Jenny Srey, second from right, are pictured with three of their children. (Submitted photo)

Judge Thomas Neuville ruled this week that he could not act outside the two-year limitations in the case. His decision to uphold Ched Nin’s 2010 conviction of assault for firing a BB gun at a car means his deportation to Cambodia remains imminent.

In the court order document, the court stated that it is sympathetic to Nin’s situation, but that his recourse is “political, not judicial.”

Nin sought post-conviction relief upon being detained more than three months ago by Immigration and Customs Enforcement, along with seven other Cambodian refugees now fighting removal together as the “Minnesota 8.” Nin has not set foot in Cambodia, as he was born in a refugee camp in Thailand after his parents fled to safety.

Nin has since turned his life around as a carpenter, according to his family, and is raising five children, all of whom are United States citizens, with wife Jenny Srey, as well as taking care of his mother, a naturalized U.S. citizen, and father, a lawful permanent resident. Should the deportation proceed, he would not be granted re-entry to visit or reside.

“At first I was shocked and stared at my phone in disbelief,” Srey said in a text message. “It was denied on a mere technicality.”

Srey emphasized that the decision does not mean he has not been deemed more guilty or now poses a risk to the public.

At the court hearing in late November, more than 40 family members, friends and others supporting Nin’s fight to stay filled the courtroom.

Attorney Bruce Nestor argued Nin was ill-informed of the immigration consequences of his plea, based on Padilla v. Kentucky, a 2010 Supreme Court decision that states criminal defense attorneys must advise non-citizen clients of the deportation risks of a guilty plea.

Assistant Rice County Attorney Terence Swihart requested Judge Neuville deny the petition he noted as untimely given Nin had until November 2012 to appeal the conviction with the knowledge that an immigration judge ordered him to be removed in June 2012. Nin was told by Immigration and Customs Enforcement that it was unlikely he would be deported, Nestor said to the judge.

However, the court said in the document that there was no allegation that state officials were responsible for this belief and no record to suggest Nin was coerced into pleading guilty.

In supplemental arguments filed prior to the order, Swihart maintained the state’s argument against Nin’s petition due to its untimeliness. By the fact that Cambodians were being deported at the time he was ordered for removal, Nin should have known there was a risk and petitioned while he could, Swihart argued.

If using the “interest-of-justice” exception to the two-year limitation on a motion for post-conviction relief, it must be filed within two years the claim arose. Using both the date the U.S. Department of Homeland Security filed a notice for Nin to appear, November 2010, and the date he was ordered for removal by a federal immigration judge, June 2012, the court ruled that Nin’s petition is time-barred.

Srey said that a majority of community members are unable to understand, let alone maneuver, the system without the assistance of expensive attorneys, many of whom also lack thorough understanding of issues specific to the Southeast Asian community.

“A two-year limit on justice − that doesn’t make sense,” Srey said. “The decision they made is not addressing substance or the real issue of justice.”

Nestor also defended the petition as timely due to the October Minnesota Supreme Court decision that air-powered BB guns do not classify as firearms, which would have led to a one-year mandatory minimum sentence for Nin instead. If he would have been sentenced for 364 days or less, he would not have been flagged for deportation.

In supplemental arguments for Nin, Nestor cited the Dec. 7 court decision that stated illegal sentences not authorized by law are not subject to a two-year limitation. The court ruled the decision does not apply retroactively to Nin’s case, as the definition change of “firearm” does not affect the accuracy of his conviction nor make it fundamentally unfair.

In addition to finding Nin’s sentence legal at the time it was imposed, the court found it to remain legal today. Though BB guns are no longer considered firearms under Minnesota law, the mandatory minimum sentence for assault with a dangerous weapon is one year and one day, the court stated.

Though the court said it must enforce these time limitations to protect the integrity of judicial proceedings, it indicated that Nin presented a compelling personal argument.

“The Court hopes that the ICE will consider [Nin’s] circumstances as an individual who has never been to Cambodia, and who built and continues to maintain his entire life within the United States,” the court order document states.

Srey said that the court made this decision despite knowing of their family hardships, with Nin’s teenage daughter having a heart condition and his children’s likely turnover to Child Protective Services due to issues with the mother.

“Rice County has been talking about sanctuary cities, people are saying they want to support families. This was something very concrete that they could have done,” Srey said. “People should remember this when they go to vote.”

The Cambodian government has yet to issue travel documents, Srey said, which would ensure his deportation. Nin’s remaining avenue is to petition the immigration court to reopen his case.

“This is a question of family unity − those are American values,” Srey said. “ICE can be the one that makes the right call.”