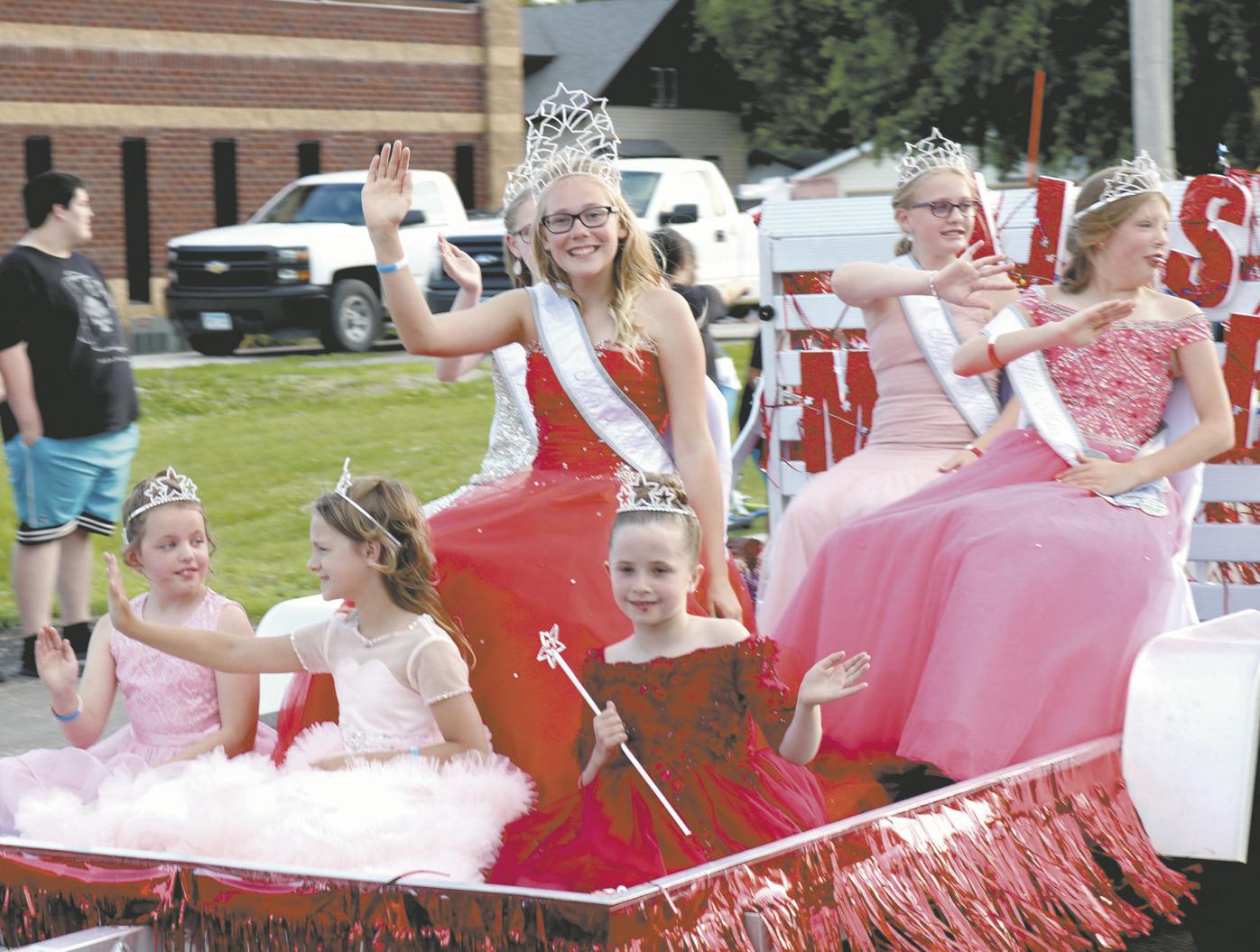 Royalty from the Miss Medford contest wave to the crowd during the 2019 Straight River Days Parade in Medford. After taking a year off due to the COVID-19 pandemic, the annual community celebration is set to kickoff on Thursday with new and old events to celebrate the 50th anniversary spanning three days. (File photo/southernminn.com) 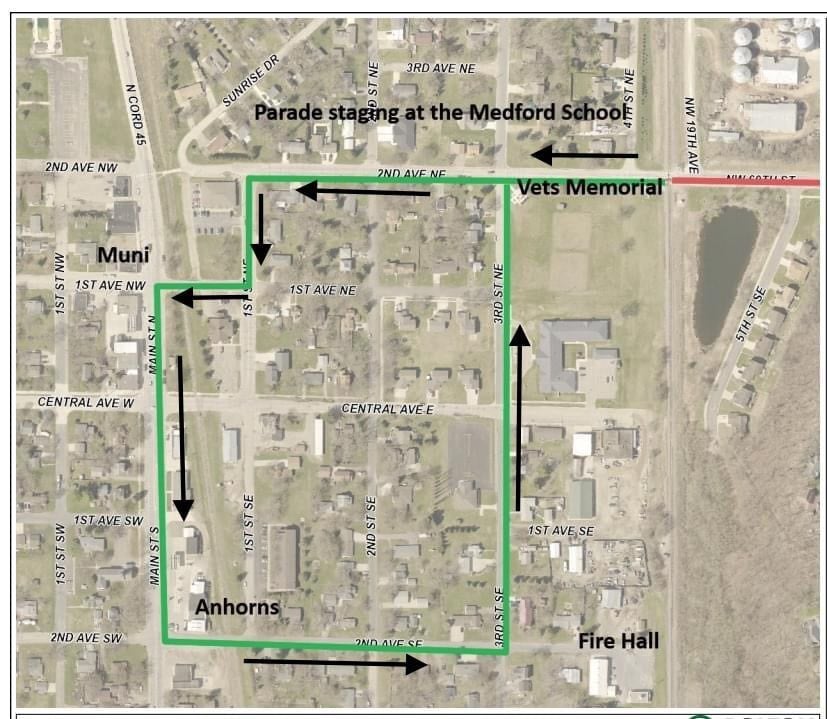 The new parade route for Straight River Days will begin at the Medford Public Schools. The parade starts at 7 p.m. on Friday, June 18. (Photo courtesy of Medford Civic Club)

Royalty from the Miss Medford contest wave to the crowd during the 2019 Straight River Days Parade in Medford. After taking a year off due to the COVID-19 pandemic, the annual community celebration is set to kickoff on Thursday with new and old events to celebrate the 50th anniversary spanning three days. (File photo/southernminn.com)

The new parade route for Straight River Days will begin at the Medford Public Schools. The parade starts at 7 p.m. on Friday, June 18. (Photo courtesy of Medford Civic Club)

After a long year, Medford is ready to get out and celebrate with a party that has been 50 years in the making.

The annual Straight River Days festival returns following a hiatus due to the COVID-19 pandemic, kicking off Thursday evening with a ceremony at the Veterans Memorial and the Miss Medford Pageant winners being crowned. The days that follow will feature both familiar and brand new events, including garage sales, food stands, the car and motorcycle show, escape rooms, bean bag tournaments, multiple parties, and – of course – the candy-filled Straight Rivers Day Parade.

When it comes to the biggest celebration in Steele County’s oldest town, Medford Civic Club President Erin Sammon said it was difficult to go a summer without the usual Straight River Days festivities, but that canceling the event in 2020 was the right decision to make.

“It was terrible, but for everyone’s safety and well-being for what the situation was, it had to be done,” Sammon said. “But we are absolutely back at it this year and so thankful that we are.”

Between returning after a year off and preparing for a milestone anniversary, Sammon said the Civic Club – which has headed up the event for a number of years now – had a lot of fun brainstorming new ideas to keep the event fresh and preparing for fan favorites to return. The parade will have a new route this year, largely due to the development project on the old football field in town, changing the staging area to the school parking lot.

“It’s a very popular parade and I am really proud of it,” Sammon said, adding that it’s a very “candy-centric” parade that helps draw a large crowd of families. “Something exciting is that our Civic Club will actually be in the parade for the first time ever – or at least since we took over planning it. We will be on an actual float throwing candy.”

Grand marshals for the parade this year are Sara Markham and Kimberly Goblirsch, both teachers from the Medford High School who were nominated for Minnesota Teacher of the Year with Goblirsch still in the running. Special parade guests include the Saint Paul Winter Carnival VULCANS, the Juggling Jugheads, Albert Lea Shrine Club, River City Rhythm and the Rochester Shrine Club Merry Medics clowns posse.

Though the parade may very well be everyone’s favorite part of the weekend, Sammon said she is especially enthusiastic about several of the new events they are bringing to the plate this year. One event she is especially eager for is the escape rooms that will be set up in two tents at the park.

“If people have not done an escape room before I strongly encourage they come down – it is nothing like you would expect,” Sammon said. “The ones we have will go all the way down to age 10, so they are appropriate for all ages and escape levels.”

People can sign up for the escape rooms in advance at the Medford Muni or on Saturday at the park. Participants can sign up their own group with a maximum of six people or sign up in smaller groups/as individuals and be paired up with others. Sammon said a prize will be awarded to the team who escapes the fastest.

With a little something for everyone over the three-day event, Sammon said they are looking forward to bring Medford back together.

“We have been thinking about this for a long time and I feel like we have a really good variety for everyone,” Sammon said. “We are so happy that we are able to do something this year, especially for our 50th anniversary. It’s going to be a great weekend.”

The event was first celebrated in 1971, and due to its abundant resource was almost called “Gravel Days.” The first Straight River Days event served as the celebration of the opening of the new wastewater treatment facility and included a parade, a carnival, canoe derby, street dance, and the Miss Medford Beauty Pageant.

Historically, the local civic club and women’s group spearheaded Straight River Days. Over the years the landscape of this celebrated weekend changed due to several factors, including club membership decline, decrease in sponsorships, and the added complexity of successful implementation of such an event. Eventually it finally dwindled down to feature only the parade.

In 2015, a small group with nostalgia for the “good ol’ days” decided to take action and joined the existing Civic Club to see how they could help regain the glory of Medford Straight River Days. With some trial and error, along with some extraordinary support from the community, Straight River Days now spans over the weekend and consists of more than 20 events appealing to all ages. The Civic Club has grown from just a handful of people to 20-plus full-time members and even more part-time supporters.

For more information on Straight River Days, visit the website at StraightRiverDays.com