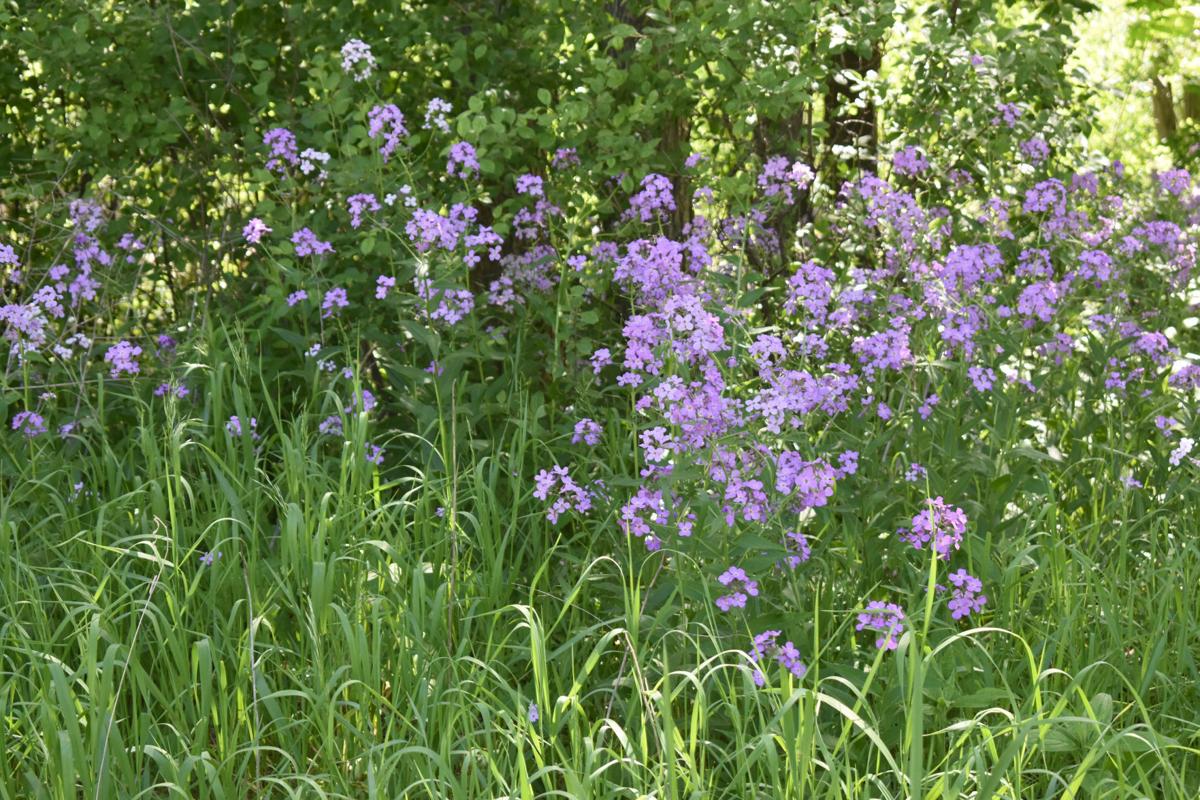 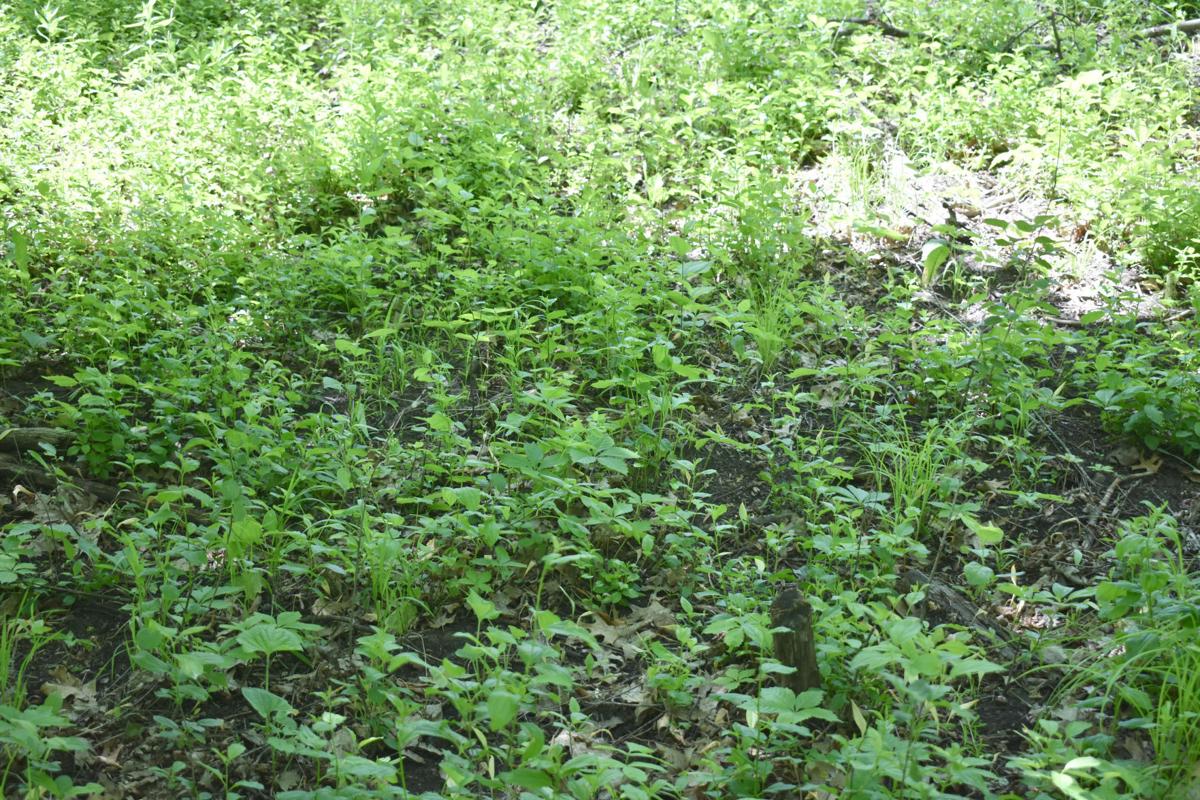 Mustard garlic is an invasive species that keeps coming back at the River Bend Nature Center, but Naturalist Brittany Smith said that’s part of the process. It could take a minimum of 10 years before it’s completely gone. (Misty Schwab/Faribault Daily News) 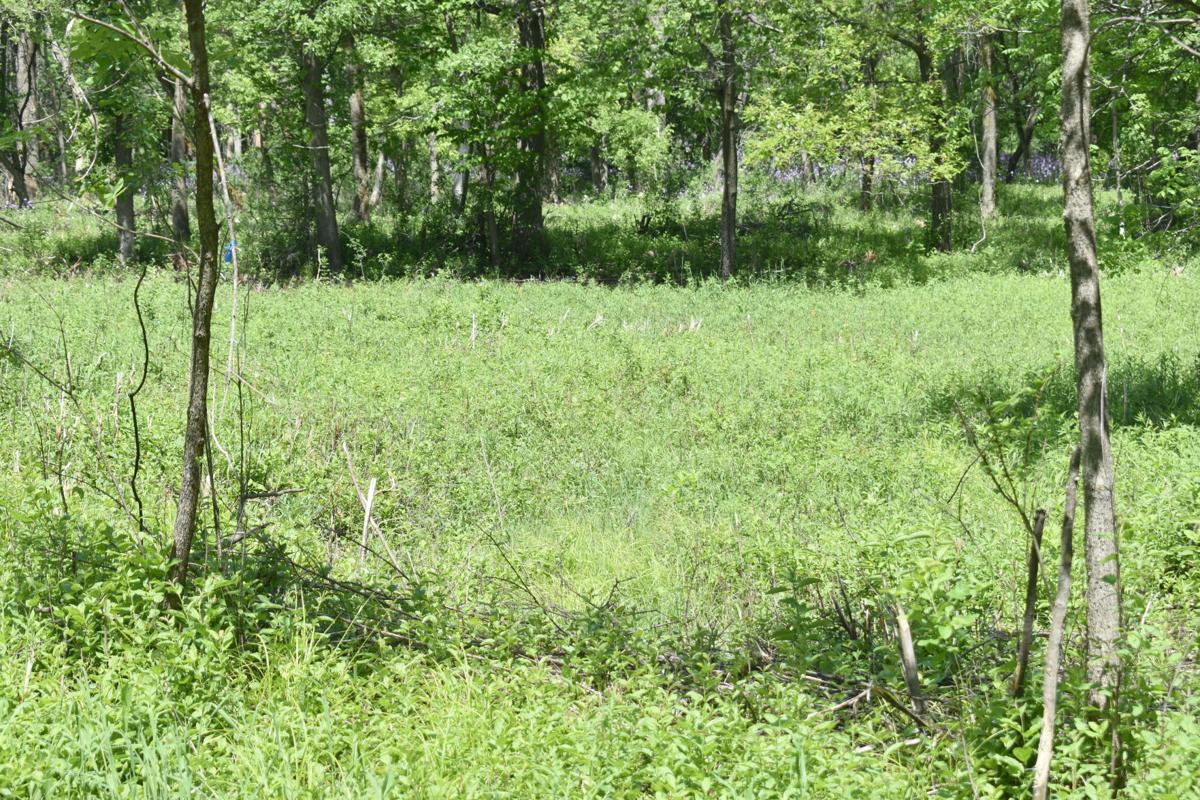 Machinery removed the invasive species in this particular area of the Big Woods, but mustard garlic will eventually cycle back. (Misty Schwab/Faribault Daily News)

Mustard garlic is an invasive species that keeps coming back at the River Bend Nature Center, but Naturalist Brittany Smith said that’s part of the process. It could take a minimum of 10 years before it’s completely gone. (Misty Schwab/Faribault Daily News)

Machinery removed the invasive species in this particular area of the Big Woods, but mustard garlic will eventually cycle back. (Misty Schwab/Faribault Daily News)

The purple flowers popping up around the River Bend Nature Center might look pretty and smell pleasant, but according to Naturalist Brittany Smith, the plant that produces these flowers does far more harm than good.

“The way [invasive species] take over an area is they completely outcompete the native species, so then we have a single species that decreases biodiversity,” said Smith. “… It reduces food available for wildlife.”

Getting rid of invasive species has been an ongoing and expensive process, said Smith, but recently RBNC received three grants to further the work. This will allow RBNC to restore three different woodland areas that total 80 acres — and that’s more than Smith, who also conducts nature camps, can do on her own.

To expand her outreach, Smith invites community members to participate in an online lunch and learn from noon to 2 p.m. Wednesday, June 17. Registration is available at bit.ly/3gMkZmq, and cost is $5 for non-members and free for members. Participants will receive a Google Meet link after completing registration.

During the lunch and learn, Smith will talk about the Big Woods specifically and discuss a unique ecosystem found in a small portion of Minnesota. This ecosystem contains a variety of woodland plants, some of them endangered or rare, and RBNC’s goal to restore these native species. Smith said dwarf trout lilies, a forest wildflower found in Rice, Steele and Goodhue counties, is the main native species of focus right now.

Smith explained that the process of ridding the Nature Center of invasive species requires commitment, patience and energy. Not only that, but the timeline of completely eradicating the invasive species takes at least 10 years because their seeds remain viable in the soil for that long. Buckthorn and mustard garlic also give off a chemical source in their roots, said Smith, and this prevents plants from growing around them. Being persistent in pulling the invasive species for a minimum 10-year period is what it takes to see the restoration of native species, she said.

Even if it will take a long time before native species begin to flourish again, Smith said even volunteers who dedicate one hour to digging in the dirt can make a big difference. Those interested, even if they don’t participate in the virtual session, can contact her via email at smith@rbnc.org or find her pulling invasive species at the Nature Center from 8 a.m. to noon Tuesdays, Wednesdays and Thursdays.

“The office isn’t open, so I’m just outside doing that,” said Smith. “I’m willing to teach people, and if they want to come out on their own time, they are more than welcome to do that.”

Those who do volunteer should wear long pants, closed-toed shoes, work gloves and safety glasses (if available) and bring a water bottle and bug spray. Those who prefer to work in a group are invited to join an effort called Buckthorn Battles — a Stewardship Days contribution for ages 8 and up. The event is 5 to 7 p.m. Tuesday, June 16 and Thursday, June 18. Call River Bend at 507.332.7151 or visit its website at rbnc.org/upcoming-programs to register and/or find out more.

“Another thing that’s really nice about volunteering specifically now: because we have so much space and work to do, social distancing is very easy to achieve while also being able to talk among one another and making an impact on Minnesota’s native habitat,” said Smith.

To learn more about the Big Woods restoration project, participate in the online lunch and learn from noon to 2 p.m. Wednesday, June 17. Volunteer during a group effort at bit.ly/3gMkZmq.

Buckthorn Battles, an in-person stewardship effort that involves pulling the invasive species buckthorn, is 5 to 7 p.m. Tuesday, June 16 and Thursday, June 18. Call RBNC at 507-332-7151 or visit rbnc.org/upcoming-programs to register.