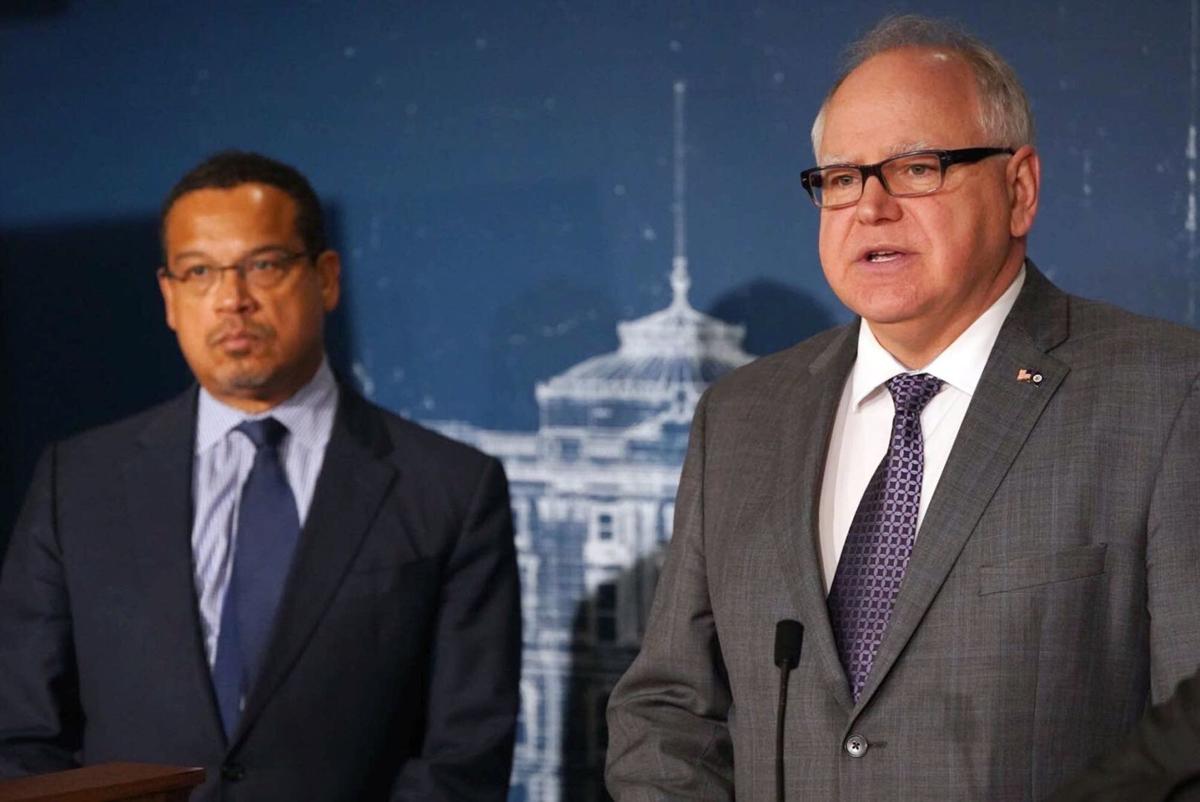 Gov. Tim Walz speaks during a press conference on Friday, March 13 announcing “community mitigation strategies” intended to slow the spread of the COVID-19. Seven legislators and a business coalition have challenged Walz’s authority to declare a peacetime state of emergency over a pandemic. (Evan Frost/MPR News) 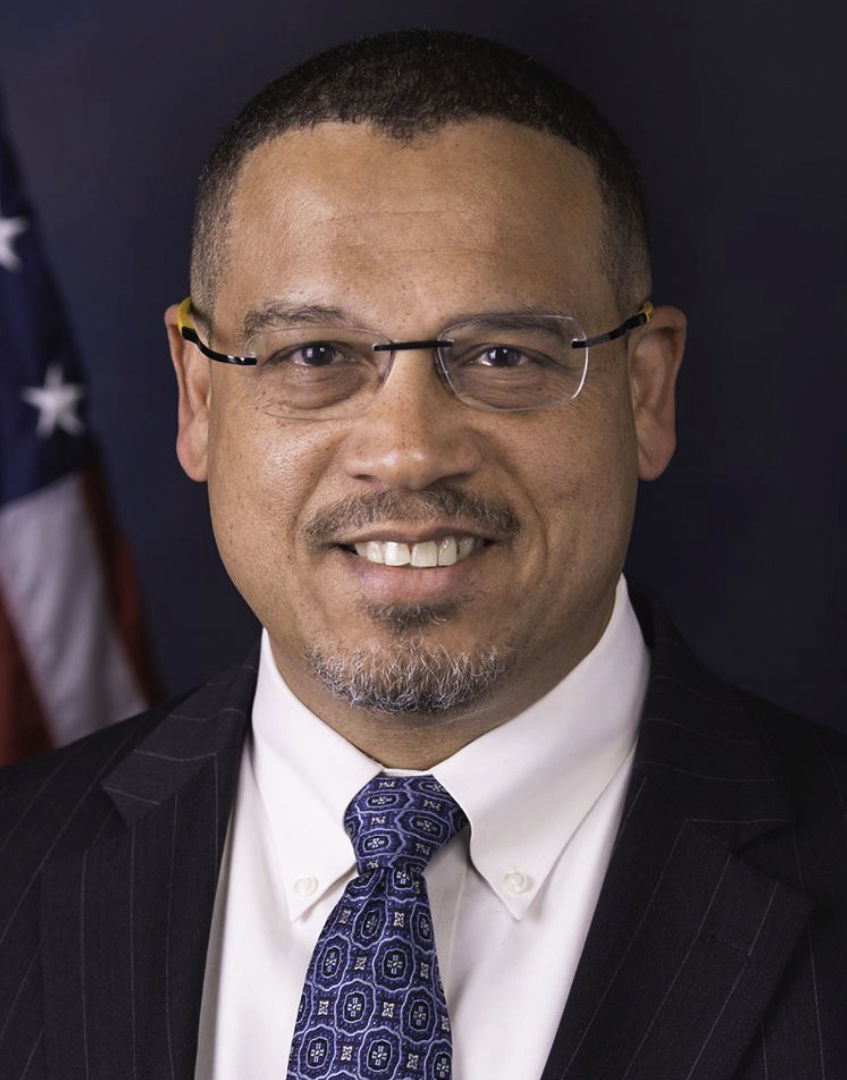 Attorney General Keith Ellison has filed a motion on behalf of Gov. Tim Walz to dismiss a lawsuit challenging the legality of the governor’s Peacetime State of Emergency declaration.

Filed on May 28, the lawsuit is backed by the Free Minnesota Small Business Coalition, a group of more than 40 businesses across the state, as well as four state legislators affiliated with the New House Republican Caucus. Two of those legislators, Rep. Steve Drazkowski of Mazeppa and Rep. Jeremy Munson of Lake Crystal, represent districts in southern Minnesota. Both staunch conservatives, they left the main House Republican Caucus over frustration with its leadership. Sen. Mike Goggin, of Red Wing, and two other state senators have also joined the suit against Walz.

The NHRC has long been harshly critical of the governor’s executive orders since they were first implemented in mid-March. In May, they minced no words opposing the latest extension of the Peacetime Declaration of Emergency.

While this is the first lawsuit joined by members of the legislature, it’s just the latest chapter in the ongoing legal battle between the governor and the coalition. In April, the group filed a separate lawsuit in the Minnesota Court of Appeals.

That lawsuit argued the governor’s orders violated the 14th Amendment, known as the Equal Protection Clause, because some businesses were allowed to remain open or reopen while others with similar profiles were not.

It was ultimately dismissed because the court ruled that it did not have the authority to rule on the constitutionality of the governor’s executive orders because the Legislature did not provide the court of appeals with the power of judicial review. The ruling dealt a blow to the coalition’s hopes of reopening the government as soon as possible. However, another group known as the Midwest Law Center is continuing to pursue that line of argument in federal court.

The business coalition took the opportunity to retool its argument. Its new lawsuit continues to claim that the governor’s executive orders run afoul of the U.S. Constitution, while adding the new claim that they violate the state Constitution as well.

In its latest lawsuit, the coalition and caucus are represented by attorney Erick Kaardal, a former secretary/treasurer of the Republican Party of Minnesota. Kaardal insists that his activism derives less from a conservative bent than his staunch opposition to government overreach. He says the latest lawsuit is inspired by the successful challenge to Wisconsin Gov. Tony Evers’s emergency executive orders.

By challenging the orders on state rather than federal grounds, and arguing that the governor has usurped powers rightly delegated to the Legislative and Judiciary branches, Kaardal has said the lawsuit is able to sidestep questions regarding public health risks.

First, the lawsuit argues that the governor has overstepped his authority to write de facto laws criminalizing certain behaviors, such as opening a business during the pandemic without permission from the state.

The plaintiffs argue that the findings of the Court of Appeals in its prior case further establish a breach of separation of powers. Given the absence of a provision allowing judicial review, they say the Judicial branch’s authority to consider constitutional questions has been compromised.

Secondly, the lawsuit claims that the executive order statute is unconstitutional because under state law, the Governor’s Emergency Declaration only ends, and pieces of it may be overturned, only if both chambers of the legislature vote to end it.

Thirdly, the lawsuit claims that the law allowing the “Peacetime State of Emergency” declaration is intended to be used for tornadoes, floods and other short term disturbances, not an ongoing pandemic.

The Attorney General’s office strongly contests those claims. In addition to helping the governor to draft his executive orders, Attorney General Ellison has signed off on the orders as a member of the executive council.

“Governor Walz, the Executive Council and I are sympathetic to the struggle of small businesses,” Ellison said in a written statement. “We recognize that this is a difficult time for them and for everyone. Every Minnesotan does. But the governor has issued his executive orders to protect the health of all Minnesotans — including these business owners — from a global pandemic that no one alive has ever lived through. He has also been responsive to circumstances and concerns as they emerge and has tailored his orders dynamically to meet them. I stand behind the legality and constitutionality of the governor’s executive orders and will strongly defend them in court.”

In contrast to the state legislature, where the DFL-controlled House has stopped the Republicans from passing a bill to end the Peacetime State of Emergency, the executive council must give the governor their affirmative consent to continue the order.

Ellison serves on the executive council along with his fellow statewide elected officials — Secretary of State Steve Simon, State Auditor Julie Blaha and Lt. Gov. Peggy Flagan. Elected in 2018, all are DFLers.

A lack of standing

In his petition to dismiss the case, the state argues that the governor’s measures are well in line with those implemented in other states and have succeeded in reducing hospitalizations, citing an analysis published in the Journal of American Medicine.

The state further argues that the petitioners lack sufficient standing in the case. Citing a 2015 court case, he says that they would need to show that they have suffered “a concrete and particularized invasion of a legally protected interest.”

While the businesses have demonstrated that they have suffered damages from the forced closure of their businesses, the state says they didn’t show how this specifically constitutes a “legally protected interest.”

The standing of the legislators is dealt with separately by the state. The state maintains that its argument regarding usurpation of powers is too broad, as Minnesota has traditionally allowed legislators to sue only when they have suffered “personalized” harm.

The state then turns to the meat of the petitioners’ arguments. He says that the Legislature’s decision to allocate powers to the executive branch is not excessive, but rather an appropriate “cooperative venture” between the branches.

Citing a 1964 court case involving then Gov. Wendell Anderson, the state maintains that the governor’s decisions under the Peacetime State of Emergency fall under his authority to exhibit discretion as provided under the law to help the law adapt to changing circumstances.

In addition to the requirement that the emergency consist of an “act of nature” or other significant event, the state must also show that life and property are in danger and local government resources are inadequate to deal with the situation.

The petitioners did not contest the last two points but argued that a pandemic does not constitute an “act of God.” Citing federal guidelines and a ruling issued earlier this month by the Stearns County District Court, the state maintains that all of those standards are clearly met.

“The COVID-19 pandemic presents one of the most complex and rapidl -evolving crises in Minnesota’s history,” the filing stated. “This is the type of situation for which the legislature should, and frequently does, delegate authority to the governor to respond.”

The state also dismisses the argument that the requirement that both Houses of the Legislature must vote to repeal the Peacetime Declaration of Emergency, described by the legislators as a “legislative veto,” represents illegal usurpation.

The case is likely to go cold for several weeks, with a hearing not scheduled until July 16. The leisurely timetable runs counter to the plaintiffs’s desire to receive emergency relief as soon as possible.