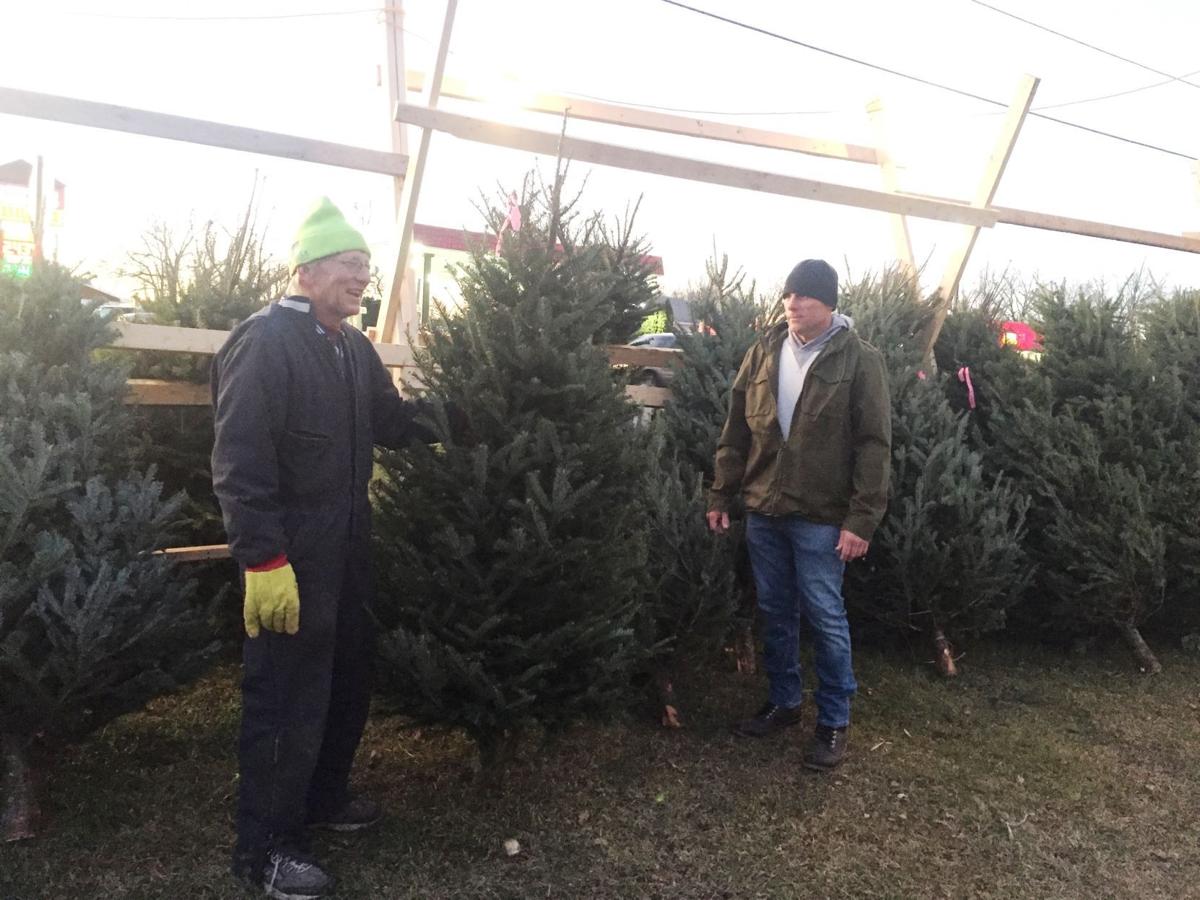 Ken Mueller (left) and Mark Steinberg (right) look through their selection of Christmas trees as their family has for nearly 80 years on the same lot in Faribault. (Gunnar Olson/Faribault Daily News) 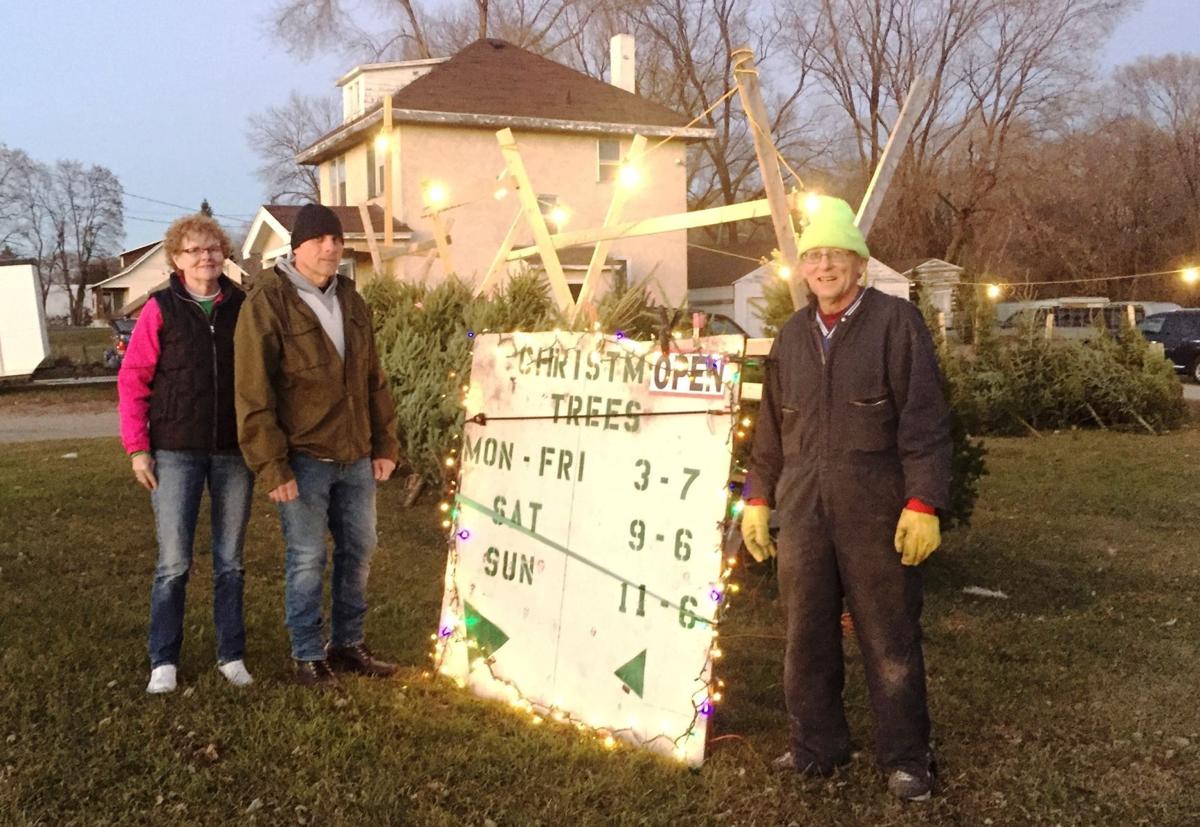 Ken Mueller (left) and Mark Steinberg (right) look through their selection of Christmas trees as their family has for nearly 80 years on the same lot in Faribault. (Gunnar Olson/Faribault Daily News)

Much has changed about the intersection where Hwy. 3 enters Faribault and turns west toward Hwy. 21, but Kuntze’s Christmas Trees remains a staple.

One family has sold Christmas trees at Kuntze’s for 79 years. As Kathy DeMars grew up and began working sales, she remembered the hotels, gas stations and other amenities that greeted guests driving along Hwy. 3, long before I-35 usurped it as the regional corridor.

This year DeMars and her family members Mark Steinberg, Danielle Mueller and Ken Mueller unpacked a truckload of trees brought down from Kettle’s Nursery in Nickerson, Minnesota, where they’ve sourced their trees since the 1930s.

Much has changed since Helen and Walter Kuntze started the Christmas tree sales business in Faribault, including the addition of a web presence in the form of

According to a Daily News article from Dec. 9, 1978, Walter Kuntze was a livestock trucker and furniture mover in 1938, but found that the month of December was slow for business. It was during that month when Kuntze decided to capitalize on the demand for Christmas trees.

Kuntze found that trees, often transported to the area by rail, would arrive dry and not shapely, so he found Kettle’s Nursery in Nickerson.

The Kuntzes would truck the trees down on Thanksgiving morning in preparation for what is the biggest Christmas tree sales week of the year. In 1950, they built a garage where they could place the trees to let them defrost and return to full form after being trucked.

The first trees cost the Kuntze’s 6 cents, which they sold at a healthy profit for 35 cents.

“We thought we were getting rich fast when occasionally we sold some at $1 each,” said Helen Kuntze to the Daily News in December 1978. “Now, natural grown balsams cost an average of $2.50 a piece and sell for $8 to $10.”

This year, many of the trees will cost customers around $20, with the biggest, nicest trees normally running customers about $50, a far cry from the pennies they sold for 79 years ago.

DeMars and her nephew Mark Steinberg both have lasting memories about spending the end of November and the beginning of December selling trees every year.

DeMars remembers the after church rush the Sunday after Thanksgiving and how popular Kuntze’s would be in those few hours.

Steinberg remembers playing in the Faribault back yard and hollering “Got a customer!” to his parents and grandparents inside.

In the 1978 Daily News article, Helen Kuntze recalled Walter Kuntze removing the knobs from the gas stove to ensure the children wouldn’t turn it on while they were outside selling trees.

“People have been coming here to get their trees forever,” Steinberg said. “There were a few rough years, but we almost always sold all of the trees.”

The two weeks after Thanksgiving, they agreed, were always the biggest for tree sales and the group was happy to roll Kuntze’s Christmas Trees back for a 79th year.

“I’ve been down here since I was born,” said Danielle Mueller, who now brings her own offspring to the lot to enjoy the Christmas tree sales season.

‘This could be it’

Steinberg purchased the property in 2013 and he is weighing his options what to do with it. He said he is toying with the idea of selling it as commercial land, but he hopes to add a caveat to any sale.

“We would like to give it to somebody who wants to keep the tree business alive,” he said.

DeMars told the Daily News that “this could be it,” for Kuntze’s Christmas Trees, which made her especially sad because she proudly boasted that she gets first pick of the trees as soon as they arrive from Nickerson.

While the 80th year of Kuntze’s Christmas Trees is uncertain, this year’s crop, says Danielle Mueller, is as good as ever.

“This year was one of the biggest years we’ve had,” she said. “They are good looking trees, too.”

Ken Mueller thinks every year that it will be his last working on the lot, but as he put it, “I think I’m going to quit, but I never do.”

His longevity in the position is due, in part, to the fact that Kuntze’s Christmas Trees needs him, but also, it’s because Ken Mueller and the rest of his extended family, truly love selling trees each winter.

“This is a hobby, but a really great hobby for my whole family,” he said. “It’s been a lot of fun over the years.”

Kuntze's is open until their stock is out during the following hours.