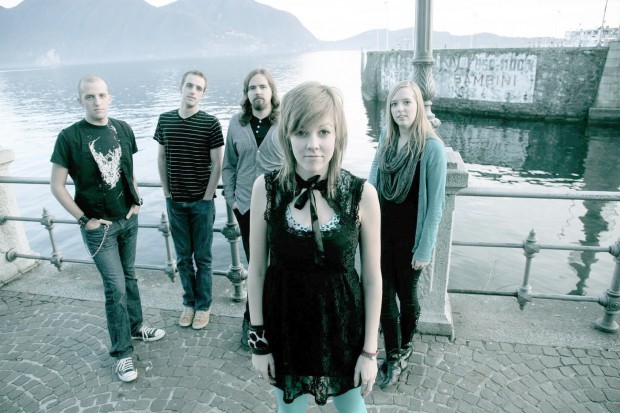 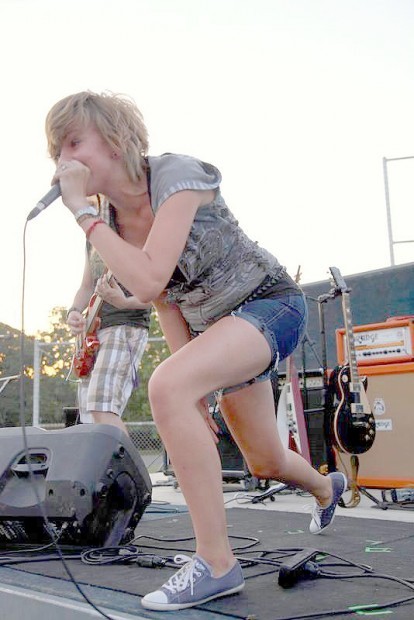 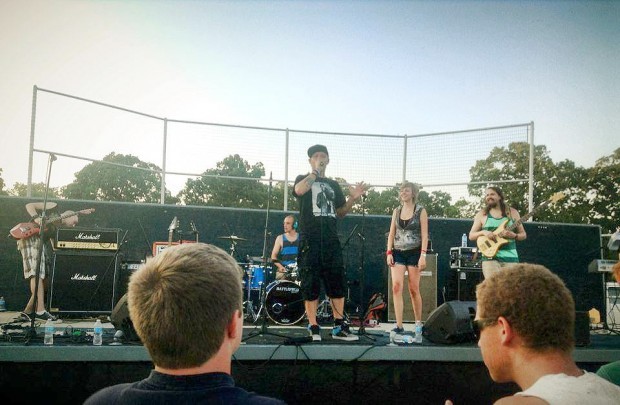 Music has been a family affair for the Medin siblings since they were young.

“My dad was interested in raising a family band,” said PJ Medin, who covers the guitar, bass and vocals. “He bought a drum set and a bass guitar, laid them out in the living room and said, ‘Learn it if you want to.’”

Breakthrough has released two albums, “Waiting” (2009) and “The Eve of War” (2011), and is in the process of putting together a third. The band consists of the five Medin children: PJ is the eldest at 22, followed by Drew, Shon, Catherine and Sara.

The best part about being in a band where all the members are related?

“You can’t exactly break up,” joked Drew Medin, who also performs on the guitar, bass and vocals.

The Medins agree that while they endure difficult times like any band, they are grateful for the constant familial support.

“It has its ups and downs,” said Catherine Medin, the band’s lead vocalist. “We all know each other, and you can’t suffer in silence while no one notices.”

Families tend to stick together, and the Medins bring their passion for strong personal connections with them everywhere they go.

On an afternoon in early July, the siblings set foot in the small city of Independence, Kan. Weary from traveling, the first thing they did, even before setting up their instruments, was find someone to talk to.

The Medins have a tradition of reaching out to the communities where they perform. Before and after each concert, they connect with local people to offer conversation and support.

Their travels are facilitated by the Extreme Tour, a cultural outreach project that connects Christian artists with at-risk and counter-culture youth around the world. Breakthrough participated in the Tour’s heartland leg, beginning in Kansas and looping through a number of states in the central U.S.

Many of the people the Medins meet are homeless or struggling and unable to afford the luxury of live music, which is why admission to all Extreme Tour concerts is free.

“A lot of people are where they are because they’ve blown their money on drugs and alcohol,” PJ Medin said. “We want to remind them that they’re somebody and they matter, and there are others out there who care for them.”

As a Christian band, Breakthrough members use these outreach sessions as an opportunity to spread their message. However, unlike many religious groups that communicate their beliefs primarily through lyrics, Breakthrough relies on face-to-face interactions to make itself heard.

The band members regularly provide free merchandise, food and drinks to audience members. PJ Medin remembers one particularly cold night when his brother Shon gave away the expensive sweater he had been wearing.

“Some churches say you have to turn or burn, but our goal is to show people the love of Christ through what we do,” Catherine Medin said.

All five of the Medins collaborate in songwriting, and Catherine Medin finds her inspiration in the struggles of her own life and those around her. Her compositions, while meant to provide support for these hardships, are not always outwardly religious.

“Many people don’t even know we’re Christian until we talk to them after the concert,” she said.

In addition to hearing stories of hardship around them, the siblings had to work together to fight the smaller daily battles that come with being on tour. On their first day traveling, the rear passenger wheel of their truck flew off suddenly.

“Overcoming little challenges like that was kind of fun,” Drew Medin said.

The Breakthrough members are settling back to normal life after their second year on Extreme Tour, which lasted three weeks. Finding time for rehearsals has become increasingly difficult; the three younger siblings are still in school, but PJ and Drew must find time off from their jobs for tours.

However, the Medins make it their goal to reconvene for one or two shows every weekend at a number of venues around Minnesota. Their favorite haunts include The River in Byron and the North Star Room in Mounds View.

Looking to the future, Breakthrough hopes to participate in Extreme Tour again next year. The Medins also hope to make a stop in Switzerland, where their parents reside, for a brief tour. Meanwhile, the family continues to work through scheduling setbacks to continue rehearsing and writing.

Drew, PJ and Catherine are Breakthrough’s primary songwriters, but everyone has their own voice to contribute. Drew Medin says ideas for melodies come to him throughout the day, and he introduces them at rehearsals for his siblings to experiment with. Sometimes the process takes months, and sometimes an idea takes off within hours.

“Once, we started with an intro and literally played through the entire song, and it basically finished itself,” he said.

Although not all of the Medins live at home anymore, their faith and the band is the one thing they all have in common.

“They want the best for you and you want the best for them,” Catherine Medin said. “I would much rather be in a family band because the fact that you’re looking out for each other overrides all the hard stuff that comes with it.”