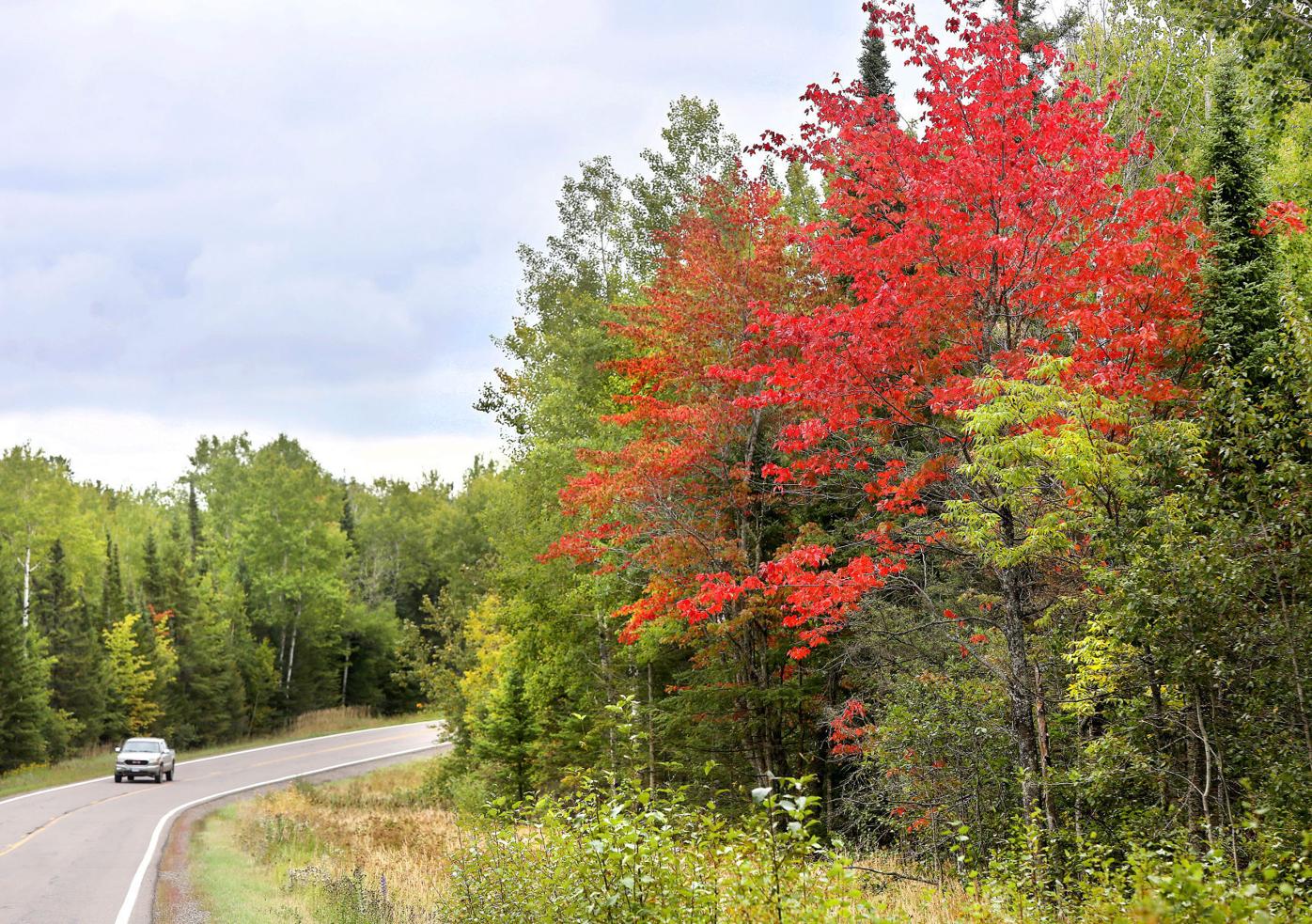 A forest in transition from summer to fall greets motorists driving along County Highway 4 north of Island Lake Wednesday afternoon. A red maple stands out among the yellow leaves of black ash and dark green of spruce. (Duluth News/Bob King) 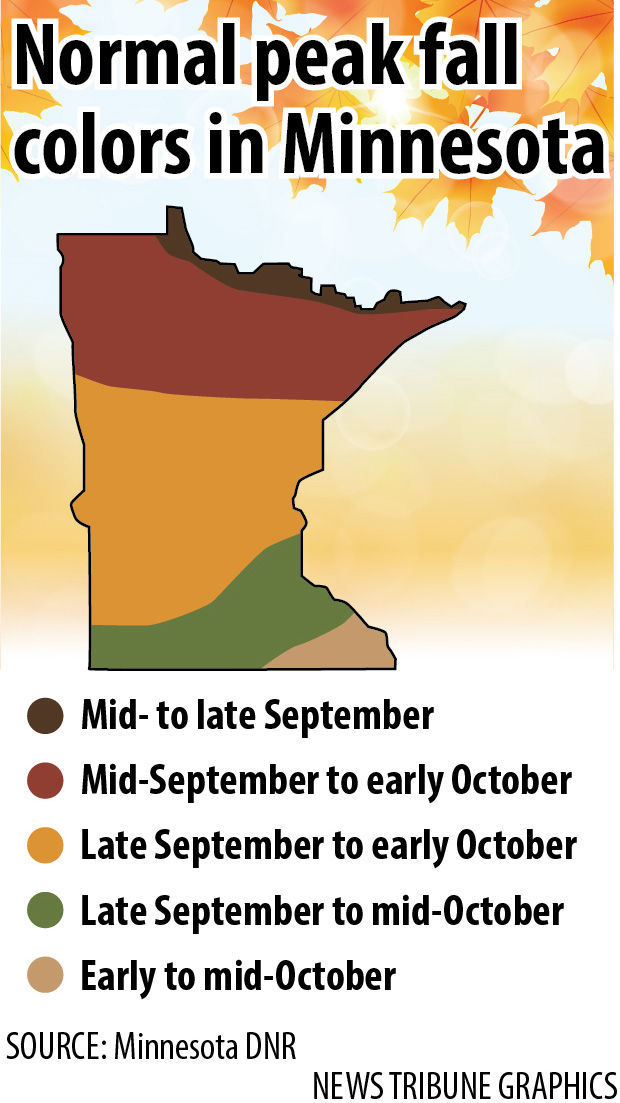 A forest in transition from summer to fall greets motorists driving along County Highway 4 north of Island Lake Wednesday afternoon. A red maple stands out among the yellow leaves of black ash and dark green of spruce. (Duluth News/Bob King)

DULUTH, Minn. — The yellows in the black-ash swamps up north, in Koochiching, Itasca and northern St. Louis counties, were already showing over Labor Day weekend, the first signs of the color bounty to follow.

The leaves of a few red maples along County Highway 4 north of Duluth were already bright crimson on Wednesday, Sept. 6.

Now the show will build gradually over the next two weeks and then explode across the Northland.

It’s called senescence, as the leaf cells break down, and it happens every year at nearly the same time, mid-September to mid-October across the Northland, depending on where you live.

But climatic events like droughts have a big impact. And even subtle changes in weather, unusually warm September nights or an unusually early frost, can change exactly when fall color hits.

Which leads to the inevitable questions for botanists, naturalists and foresters: How will the fall colors be this autumn and when will they peak?

Val Cervenka, forest health program coordinator for the Minnesota Department of Natural Resources in St. Paul, gets the same questions every year. They often start right after the State Fair ends as the first sweater-worthy mornings arrive. So her phone started ringing earlier this week.

The exception to that may be northwestern Minnesota, which is locked in a summerlong drought.

“I’m thinking up there you’ll see, or maybe already are seeing, a lot of the leaves going dormant early, turning brown and falling off without much color,” she said. When it’s dry during summer, trees produce fewer sugars that spur the fall colors.

In Northeastern and north-central Minnesota it’s been a good summer for trees, with ample rain. That should mean vibrant colors when they do come.

The Arrowhead region “and along the north shore should be nice this year – there’s been plenty of moisture. We’re just barely behind last year in terms of current color change, ‘’ said Jessica Hartshorn, DNR forest health specialist in Grand Rapids.

Cervenka reminded folks to look down, not just up, to see bountiful fall color among grasses, wildflowers and ferns. And she added a new tip this year: If you want to see more color, look for hilly areas, and not just because you get longer vistas.

“In general there’s more variety, more tree species, in hilly areas. Flat areas generally tend to have fewer or even single species,” she said. The more species, she added, the better the chance you’ll see one or more at its peak color at any one time.

As occurs each year, some individual trees started turning color in August. But (sorry to disappoint some armchair phenologists) very early coloring is a sign of unhealthy trees, not an early autumn or winter. Trees can’t predict what weather is to come. That early color was likely caused by drought, stress, insects, disease or disturbances like nearby construction or traffic.

Experts say the true onset of fall color is triggered by shortening daylight hours and the impact that declining light has on the chemistry of leaves. But temperature and sunshine also play key roles: Cooler nights help bring out more color, as do sunny days.

It’s that combination of shorter days, but especially the colder temperatures, that cause the change in hormones in the leaf that trigger senescence. Warm weather, especially at night, can slow that process down even as days get shorter.

That’s exactly what was forecast for parts of Minnesota’s Arrowhead earlier this week.

“What we want are nice days with cool nights to get it going. But not a major frost. A hard frost can kill the color fast,” Cervenka said.

Chlorophyll gives leaves their green color, while anthocyanins, carotenoids and tannins produce the reds, golds and browns that come to the forefront in the fall, the DNR notes. Those shorter periods of daylight mean a closing off of the leaf veins that carry liquid sugar in and out of leaves. Sugars in the leaf permit the red and purple colors to develop.

Purple-like and red pigments are found in the leaves of maple and oak, some varieties of ash, and tall shrubs like cherry, sumac and viburnum. Yellow is always present in leaves all summer long, but the color is revealed when the green pigment in chlorophyll breaks down.

More recent research also shows that leaves have evolved to develop those bright colors as a sort of sunscreen against damage as the tree goes dormant, protecting the leaf as long as possible so the tree can keep drawing nutrients until the leaves fall.

Of course, heavy rain or strong winds that come during peak color can quickly strip trees of their leaves, cutting the color show short.

As black ash begin to turn yellow, sumac are turning red. Next up will be maples on the back side of Lake Superior’s North Shore hills — from Duluth to Grand Portage — with birch, aspen and tamarack to follow, generally, but not always, peaking from north to south.

Maples away from Lake Superior north of Lutsen, for example, generally reach peak color between Sept. 23-26, local residents say. In Duluth, maples generally peak about a week later, during the first days of October. Trees right along Lake Superior can peak even later thanks to the lake’s temperature-buffering effects.

Get up-to-date reports on fall colors at dnr.state.mn.us/fallcolors and at travelwisconsin.com/fall-color-report.