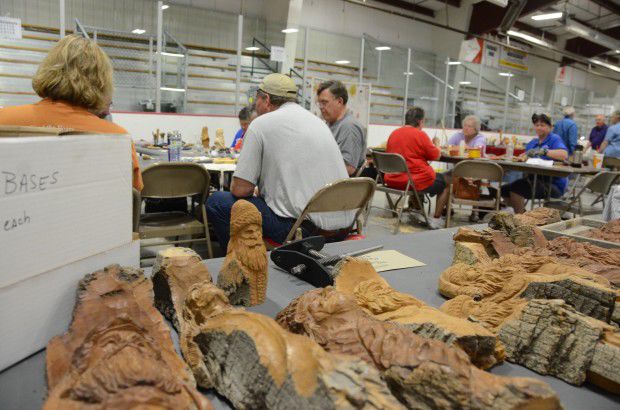 Teachers had their work on display while they taught projects and techniques to classes of about 12 students each at a previous Carv-Fest. (Daily News file photo) 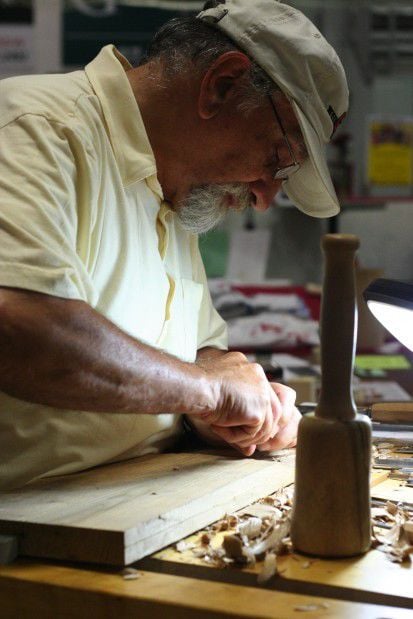 Ivan Whillock works on a wood carving. Ivan is a nationally known carver, and his family anniversary is what started Carv-Fest well over a decade ago. (Daily News file photo) 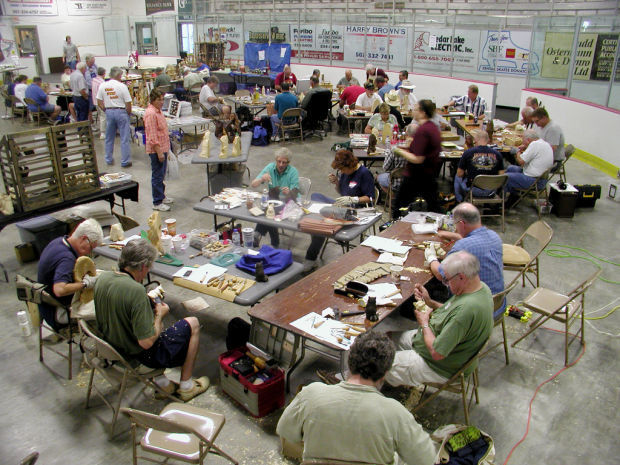 Attendees of the 2013 Carv-Fest fill the ice arena while taking part in a number of classes. (Photo courtesy of Chris Whillock)

Teachers had their work on display while they taught projects and techniques to classes of about 12 students each at a previous Carv-Fest. (Daily News file photo)

Ivan Whillock works on a wood carving. Ivan is a nationally known carver, and his family anniversary is what started Carv-Fest well over a decade ago. (Daily News file photo)

Attendees of the 2013 Carv-Fest fill the ice arena while taking part in a number of classes. (Photo courtesy of Chris Whillock)

In 2003, local woodcarver Ivan Whillock hosted a one-time event that evolved into an annual celebration of the art form in Faribault.

The first celebration was the 30-year anniversary of his career in art, so he decided to invite friends, family and other woodcarving enthusiasts to the Faribault Ice Arena, where the free event will continue in its 13th iteration this weekend. The event missed a year due to family health concerns.

“We had a big, one-time only Carv Fest at the Ice Arena that year,” said Ivan’s son, Chris Whillock. “Everybody loved it, so we have done it each year since.”

Once Ivan saw the energy from that first event, he knew it had to continue.

“We got together and had some workshops and a musical jam,” he said. “The enthusiasm was really great and I said, ‘let’s do this again.’”

The roster of attendees began as a group of students of Ivan’s, some family and customers of a mail order catalog for carving tools and supplies. After more than a decade it’s grown into much more.

The Whillocks have confirmed a long list of instructors, most of whom hail from the Midwest. However, carvers from Texas, California, New York, South Carolina, Florida and Louisiana will also attend.

“It’s expanded a great deal in terms of adding new instructors,” said Ivan. “The attendance has grown every year. It’s a far reaching event. We see license plates from around the U.S. and Canada.”

These instructors will bring with them a wealth of experience in the world of carving, including a number of one-day workshops and shorter, two-hour workshops.

Wood and tool vendors, craft classes, sharpening demos and a live auction benefiting a local charity that has yet to be determined will make up the rest of the event beginning Thursday.

While the weekend appears to cater to the serious carver, Ivan and Chris see some of the largest crowds on hand for the beginner classes.

The two-hour courses run twice daily from 10 a.m. to noon and from 2-4 p.m. Thursday, Friday and Saturday. Due to the popularity, however, preregistration is required.

“The free beginning classes will be pretty popular with people who are just starting out,” said Whillock.

Additionally, well-known Faribault carver Marv Kaisersatt will host classes during Carv Fest, which Whillock says draws a great deal of his supporters, too.

While the wood attracts people from across the country, one of the Whillock’s favorite parts of the event is the musical jam they will host on Friday night.

“A lot of carvers are musicians,” said Whillock, whose band has played in the event before.

At 7 p.m. Friday night, the carvers will ditch their tools for their instruments and head down to the Signature Bar and Grill on Central Avenue. For the Whillocks, the camaraderie is paramount to Carv Fest’s success.

“I love to see all the familiar faces at the end of the year,” said Chris. “We’ve been in this business for 40 plus years. It’s great to see the old friends back and all the other people getting interested in this unique hobby.”

“Sometimes we see each other just once a year,” he said. “We share such a commonality of interest. It’s such a great big party to get together and share some ideas of the kinds of projects they’ve been working on, sharing discoveries, techniques and ideas. It’s a great way for people who have a common interest to get involved.”

Who: Carvers, instructors and enthusiasts from across the United States.

Art show and demonstrations are free to the public.

To register for classes, call Chris Whillock at 507-339-0336. For more information, visit carv-fest.com.