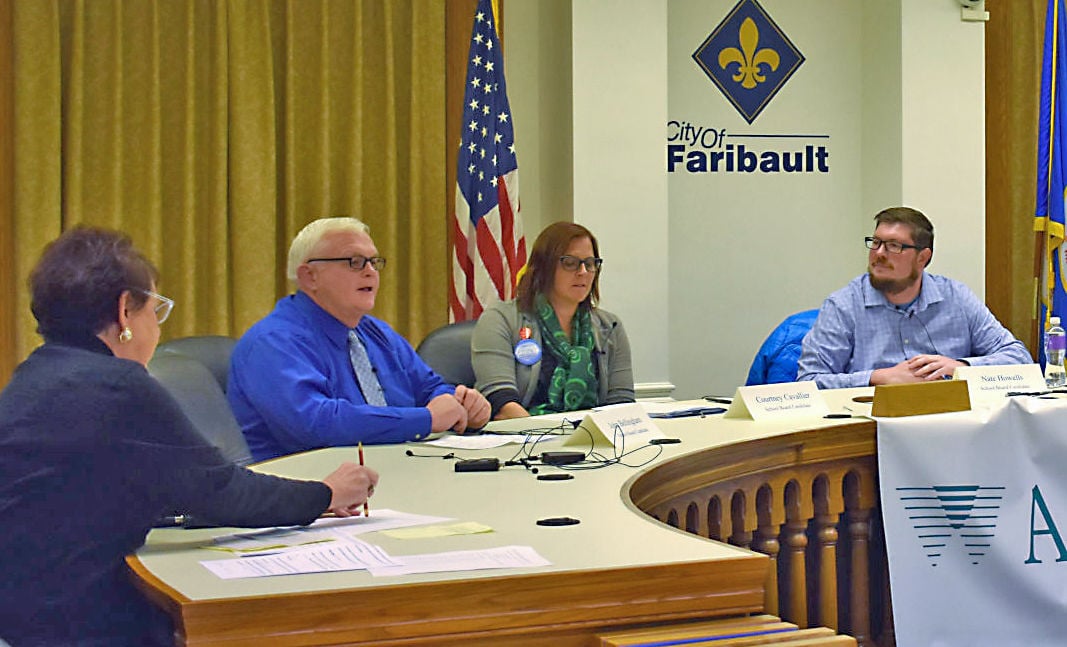 Two years ago, two female candidates ran for Faribault School Board. But just like their male counterparts, both were white. This year, two people of color are running, along with a man who’s a member of the deaf community. Another person of color is running for City Council. If elected, the board would better reflect the area’s increasing diversity. Pictured from left, 2018 forum moderator Cheryl Freund and candidates John Bellingham, Courtney Cavellier and Nate Howells. (Daily News file photo) 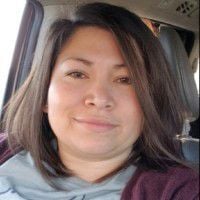 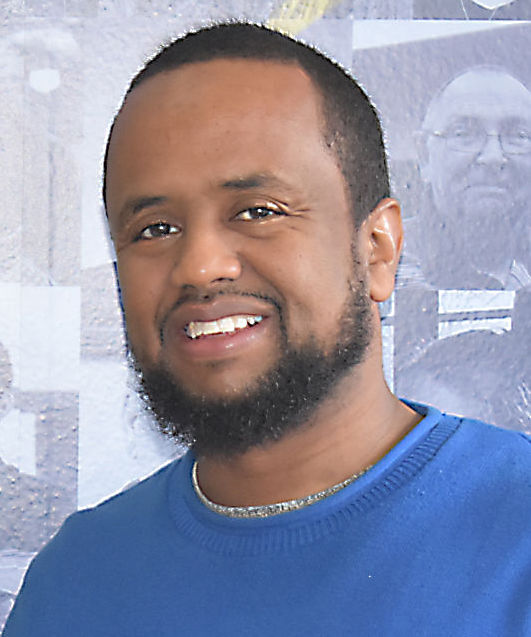 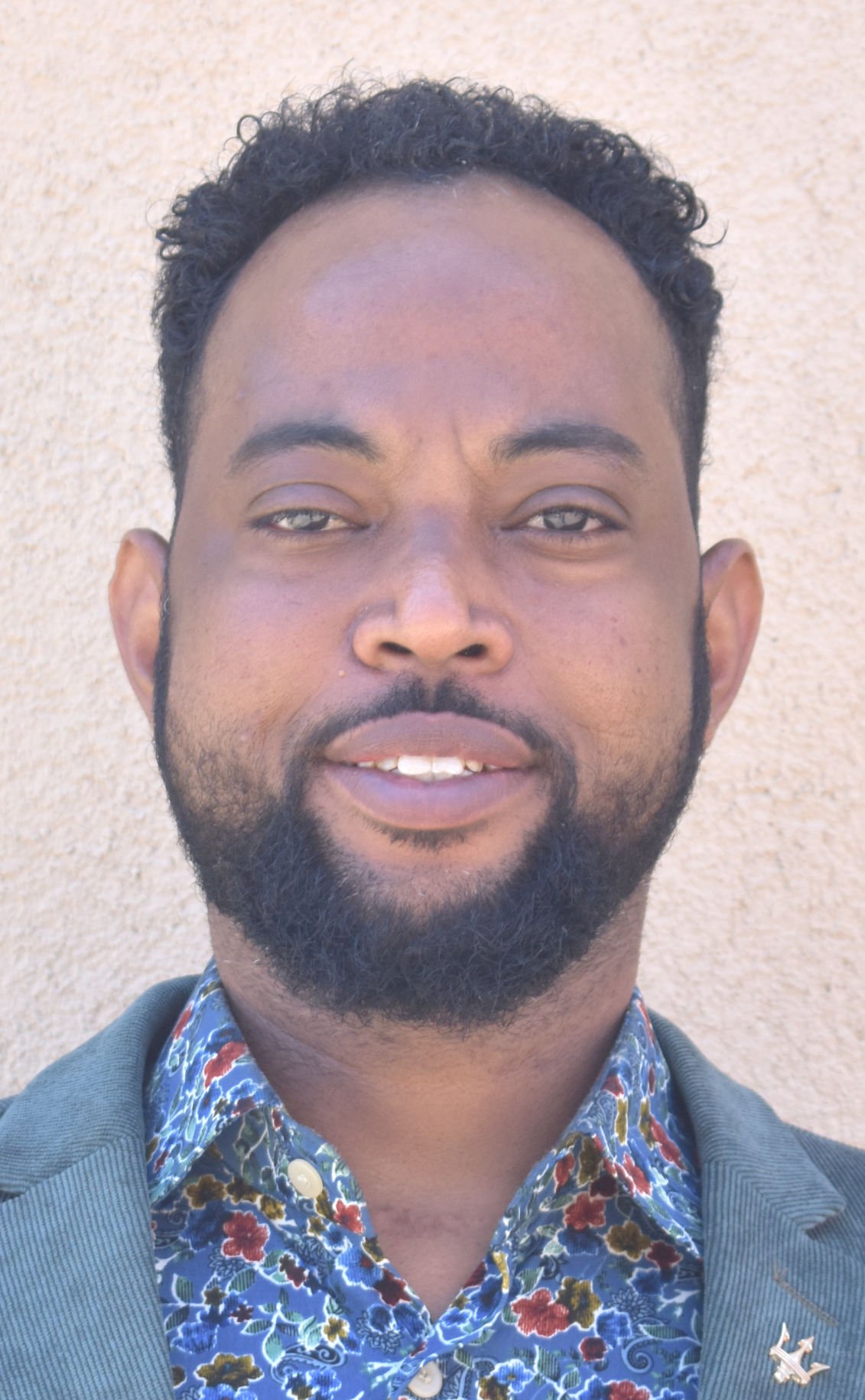 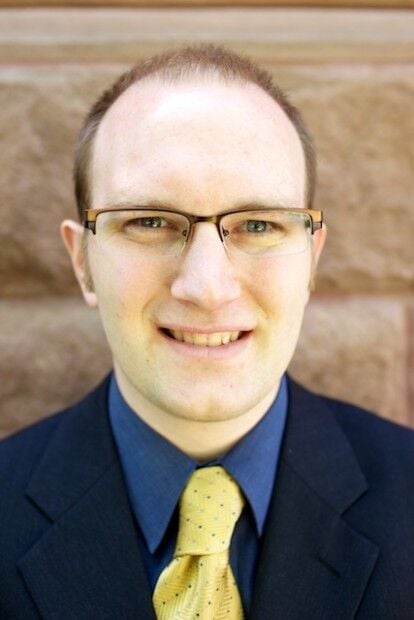 In Rice County and throughout the region, ballots for local races this fall will include an unprecedented number of candidates from diverse backgrounds.

In Faribault alone, voters will have a choice to vote for a Latina candidate, Andrea Calderon, a Somali-American candidate, Ahmed Hassan, and a candidate from the deaf community, Sonny Wasilowski. And that’s just for School Board.

In other races, Faysel Ali is seeking to become the first Somali-American to serve on Faribault’s City Council. In the race for House District 24A, Rep. Brian Daniels is facing off with Ashley Martinez-Perez, a south Texas native born to Mexican-American parents. In Northfield, George Zuccolotto and Ricky Livingston are running to become the first Latino and Black members of the council, respectively. Northfielders will also be able to vote to re-elect Rep. Angie Craig, a member of the LGBTQ+ community.

Voters will even have the opportunity to make history at the highest levels of government, thanks to Democratic presidential nominee Joe Biden’s selection of California Sen. Kamala Harris as his running mate.

While they may come from a wide variety of diverse backgrounds, these candidates have made it clear that they’re running on their life experiences and ideas for how to improve government for all people.

Calderon says would bring her experience as a student affairs specialist to the School Board, while Hassan is already advising the board on cultural issues. Ali brings to the table his time as a co-leader of the Faribault Diversity Coalition.

Nearly all of them expressed a keen awareness that if elected, they would join boards that have long been marked by a lack of racial and even gender diversity. Rice County’s Board of Commissioners, for example, is entirely composed of white males.

Three females currently sit on the School Board, though there are no people of color even though roughly half of Public School students are non-white. Many of those students are low-income, with more than 60% of Faribault students eligible for free or reduced-price school lunches.

While other candidates for the board talked more broadly about the issues faced by all students, Calderon and Hassan were keen to emphasize how they’d seen the often painful effects of racial disparities firsthand, and promised they would work tirelessly to address them.

As of the 2010 census, 86% of Rice County residents are still white. However, the percentage who are not is growing rapidly, and Carleton College Political Science Professor Emeritus and author Steven Schier said it’s no surprise that they’re beginning to engage with local politics.

“It’s often the case that the first candidates from those communities will be like local offices like School Boards,” he said. New communities in places like Faribault have a number of concerns about local services and local schools.”

Beyond the urgency of the moment, Dr. Richard Keiser, a political science professor who has long studied local U.S. political dynamics, pointed to several major factors as potential drivers of this new wave of diverse candidates.

First, Keiser said that the political system is seeing an influx of younger candidates and activists, including many immigrants and people of color, who represent a new generation of leadership inspired by the idealism of former President Barack Obama. A broadly popular figure among people of color and immigrant communities, Obama succeeded in winning Faribault and other areas which would later be carried by Donald Trump. At the state level, Keiser said Attorney General Keith Ellison has also proven an inspiration for many.

“Ellison is somebody who inspires people of color who previously would have thought they were outsiders in the political world,” Keiser said. “He’s an African-American man, a Muslim, a person who is not interested in simply going along to get along.”

Keiser said that the tendency of immigrant communities to move into left-leaning activism or politics once they begin to feel more comfortable isn’t new, but a tradition that spans back decades, even more than a century.

“Many immigrants from Somali do not take for granted but are inspired by the democratic ideals of this country,” he said. “(They’re) much like immigrants from over 100 years ago, from Italy and Eastern Europe, who were inspired to join the Democratic Party or socialist parties.”

Keiser said another factor behind the increased diversity of the politics has to do with shifts in the Democratic Party’s coalition. In recent years, Democrats at the local and national levels have lost ground among non-college educated white voters.

Keiser attributed much of the polarization over the last 30 years to disagreement over the issue of abortion, while recently, Donald Trump’s hard-line stance on immigration led to higher Republican support among non-college educated white voters.

At the same time, an uncompromising approach to those issues have led to a backlash among many college-educated white voters, creating a new coalition that has proven to more reliably support initiatives on issues like racial justice, women’s equality and LGBTQ+ rights.

Keiser added that some members have been targeted by many of the president’s most controversial statements and actions. As a result, it’s prodded members of those communities to enter the ring when it comes to political activism.

“He has heightened their sense of identity by singling them out,” he said.

The unprecedented diversity comes at a time of increasing polarization and consternation over race-related issues. Minnesota suddenly and stunningly found itself at the heart of that discussion when Minneapolis resident George Floyd was killed by police. Floyd’s death, vividly captured on cell phone video, set off mourning and protests around the globe and triggered a wide variety of reactions. Though some protests turned violent, most stayed peaceful and the Black Lives Matter movement now enjoys unprecedented popularity.

According to a June survey by the Pew Research Center, roughly two-thirds of Americans now said they now supported Black Lives Matter, and even more said they’d had meaningful conversations with family, friends or neighbors in the past month about race.

At first glance, Minnesota might seem an odd place to become the flashpoint of a discussion around racial justice. The state prides itself on an inclusive reputation, and has taken in more refugees per capita than any other state. Despite its reputation, Minnesota is actually among the most unequal states when it comes to disparities in educational attainment as well as key economic indicators. It offers a high quality of life for white residents, but standard of living is much lower among people of color.

According to 2018 estimates by the U.S. Census Bureau, 27.2% of Black Minnesotans and 18.7% of Minnesota Latinos live below the poverty line, compared to just under 7% of non-Hispanic white Minnesotans.

Homeownership statistics tell an even more stunning story. The Census Bureau’s 2018 figures show that 77% of non-Hispanic white Minnesotans live in their own home, compared to 46% of Latino Minnesotans and just 24% of Black Minnesotans.

A July analysis from the New York Times noted that people of color and local immigrant communities have also been hit particularly hard by the pandemic  — and the disparity is particularly large in Minnesota.

In large part, that’s because many work as essential workers in lower paying jobs, leaving them more exposed than other workers and unable to afford to take time off work or access lifesaving medical care.