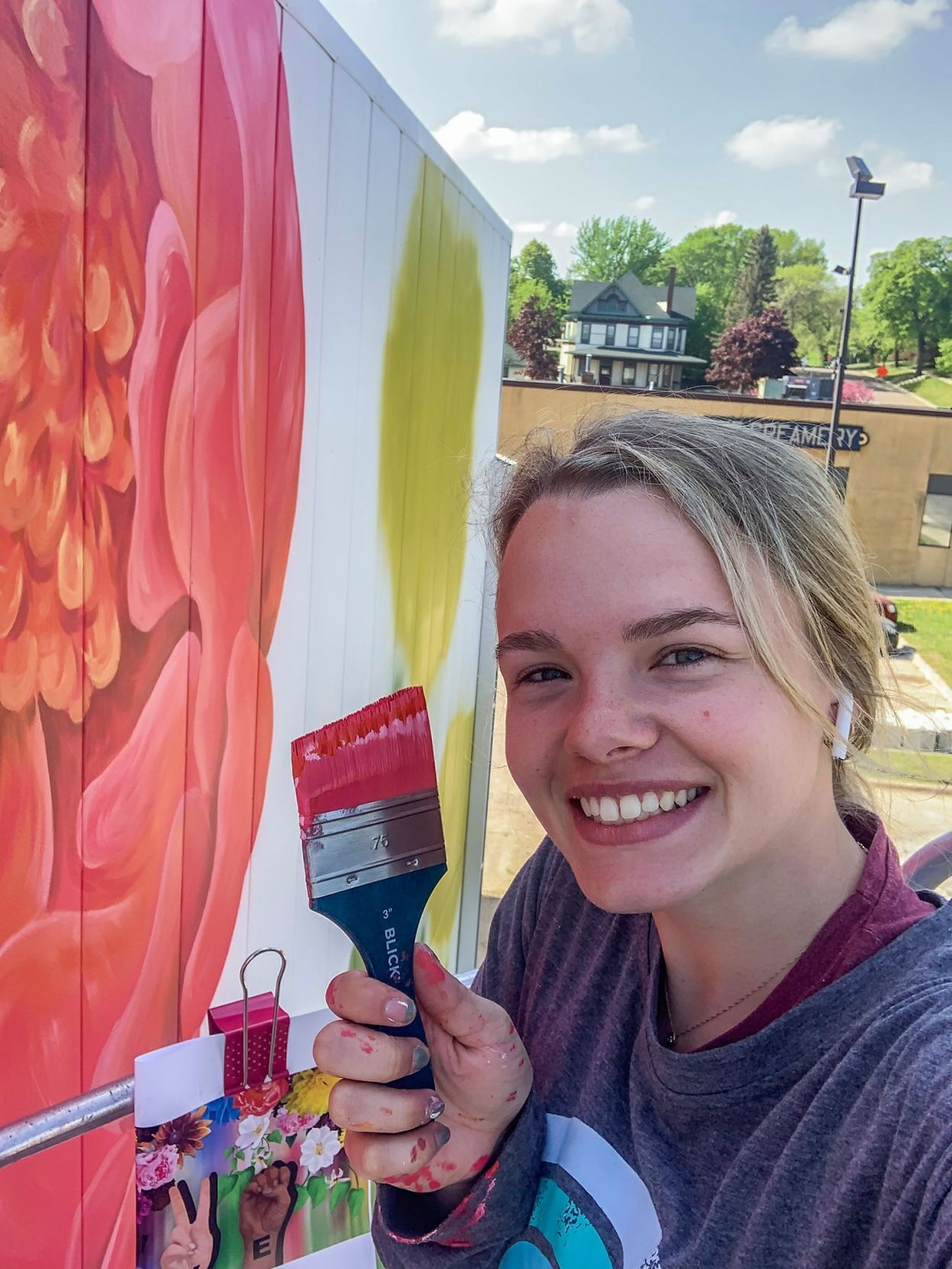 Over the last several weeks, muralist, oil painter and teacher Jordyn Brennan has been painting Faribault's "Love For All" mural. Brennan, formerly from Wisconsin, lives in Minneapolis. She received her Bachelor of Arts Degree in studio arts at Upper Iowa University. She is pursuing her Master of Fine Arts at the Minneapolis College of Art and Design. (Photo courtesy of Jordyn Brennan) 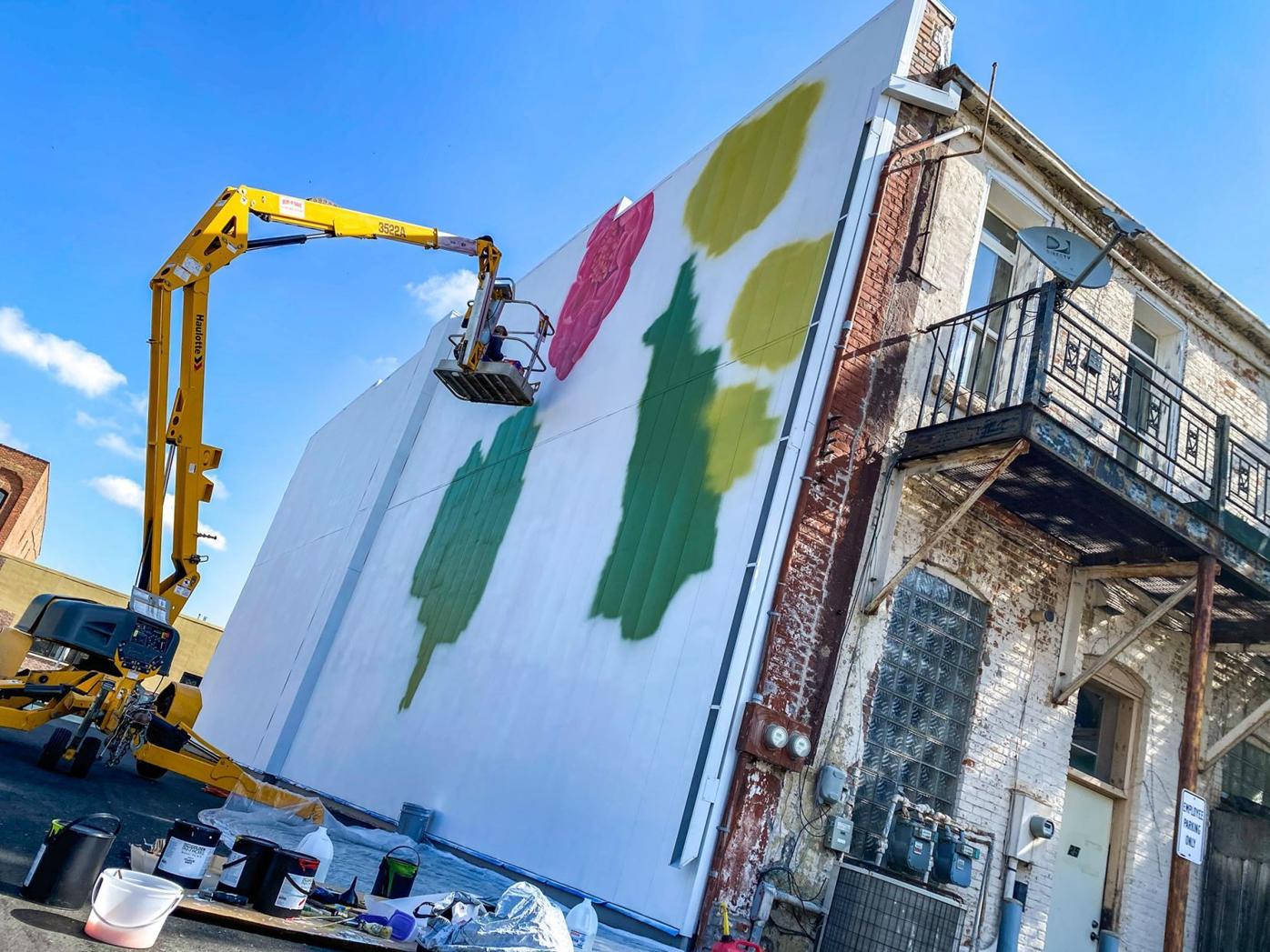 Located on the wall of the city's building on First Avenue Northwest, Jordyn Brennan began painting the "Love For All" mural on May 14. (Photo courtesy of Jordyn Brennan) 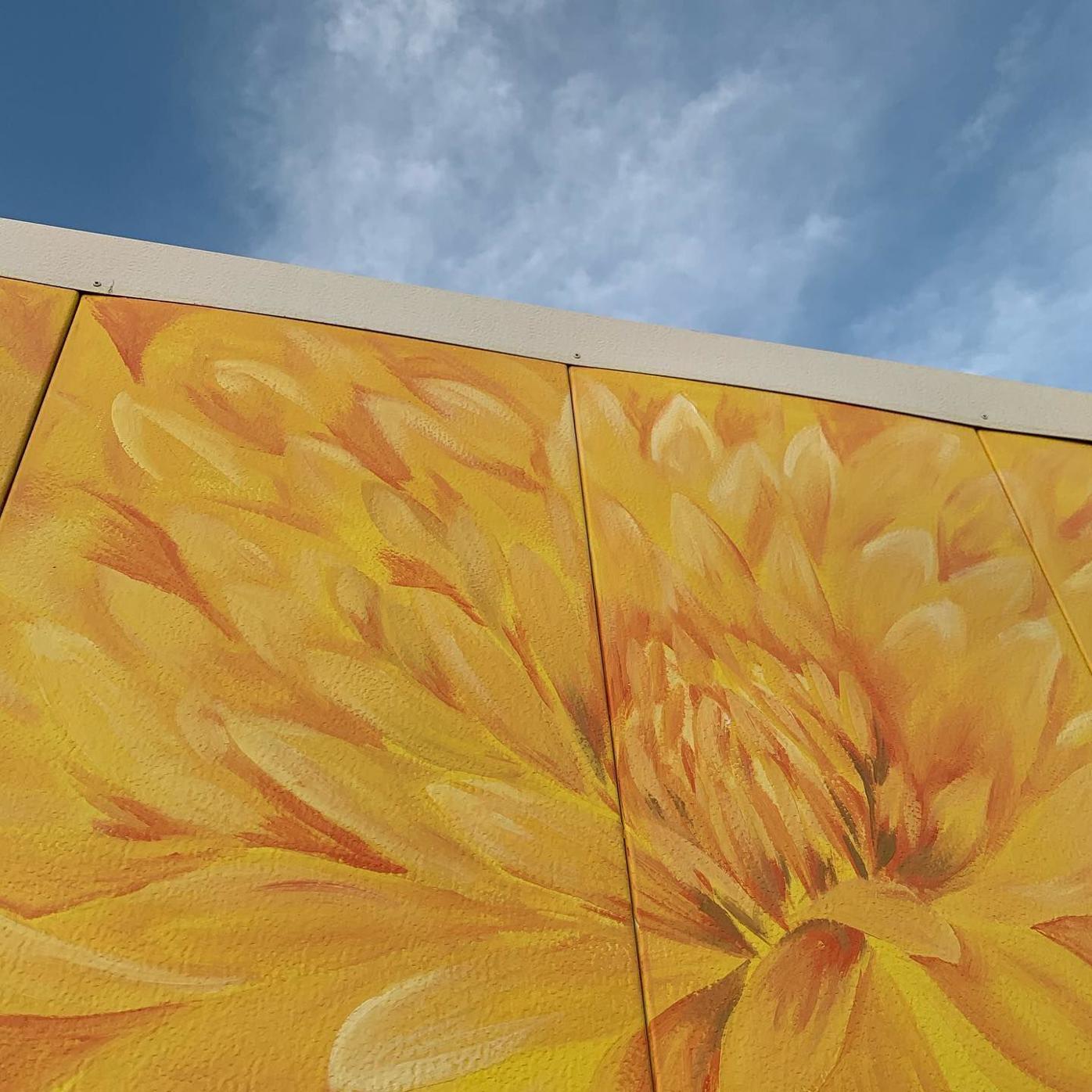 Pictured are on of several yellow mums on the "Love For All" mural Jordyn Brennan recently finished painting. All of the flowers in the mural have unique ties to the local area. (Photo courtesy of Jordyn Brennan) 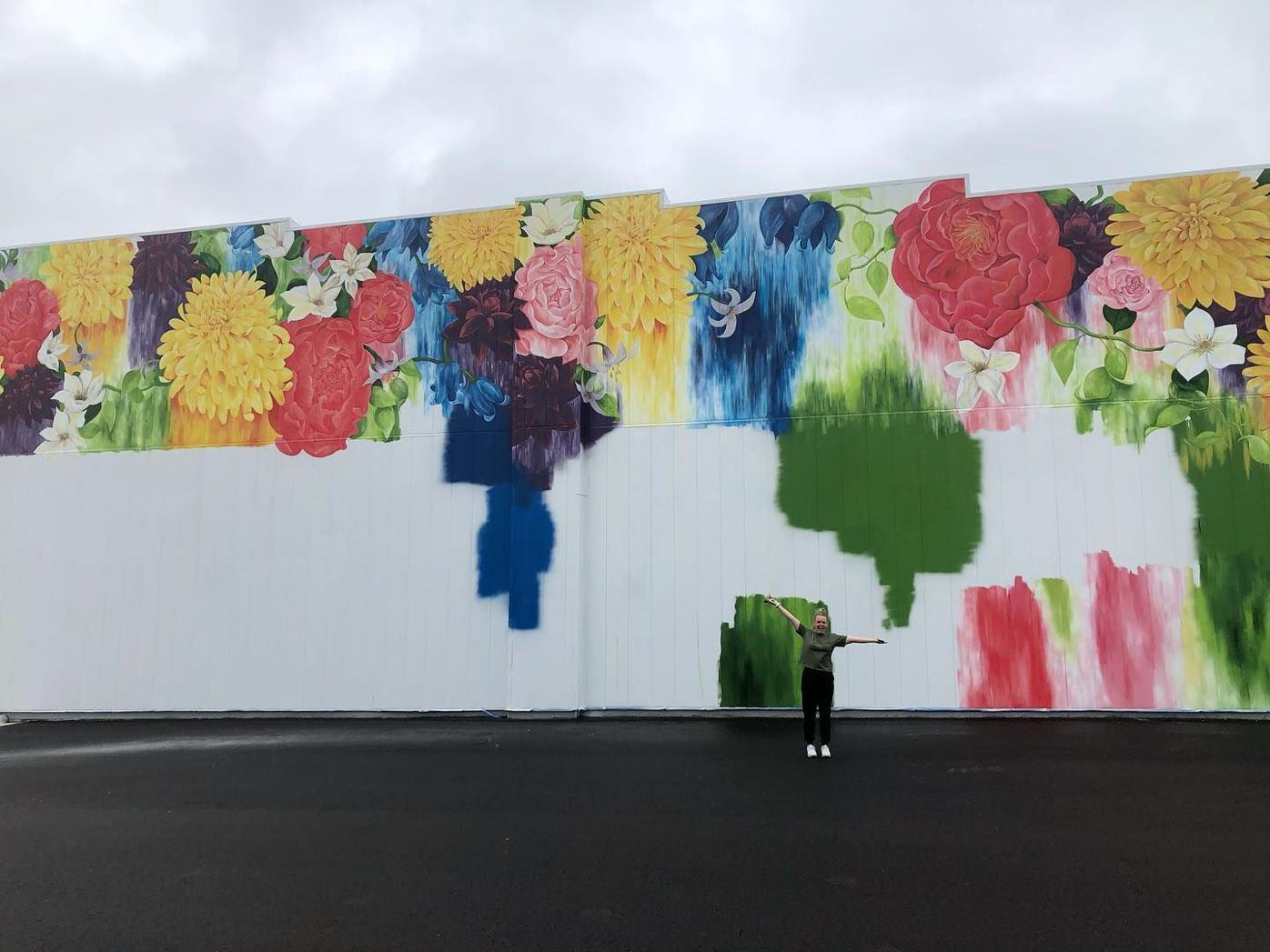 Wisconsin native Jordyn Brennan celebrates her progress with a fun photo op on May 30. Now, Brennan has finished putting the finishing touches on the mural, just in time for Faribault's Heritage Days celebration next weekend. (Photo courtesy of Jordyn Brennan) 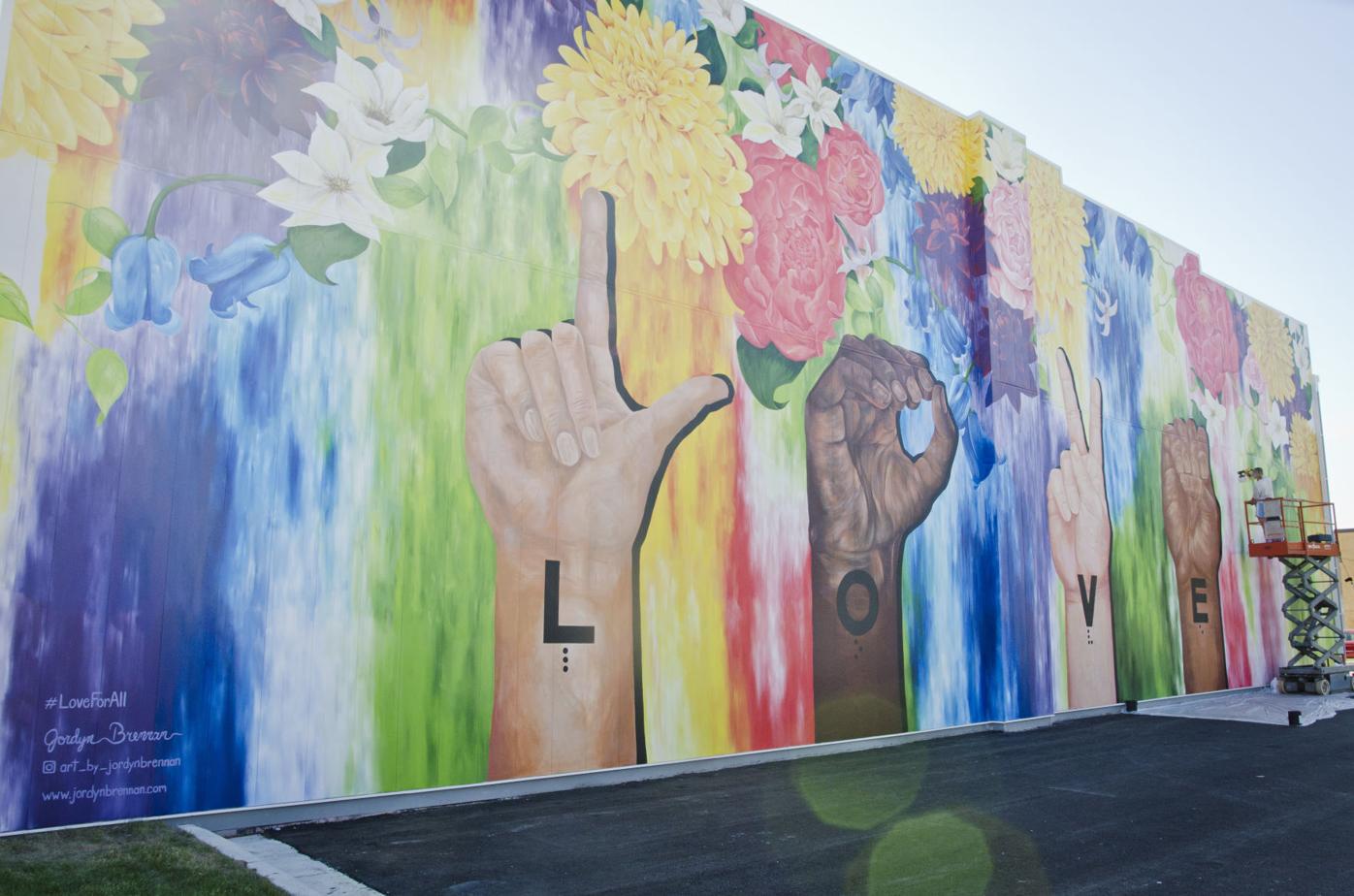 Located within the local Downtown Commercial Historic District, the two-story building, home to the "Love For All" mural, is privately owned but the wall is owned by the city of Faribault. According to a resolution from the city, last fall, the city set out to find mural designs, “To add visual interest and stimulation of downtown. The mural should create a fun, engaging and compelling visual experience. It should become a photography destination, encourage interaction with the art, and be family and social-media friendly.” (Michelle Vlasak/southernminn.com) 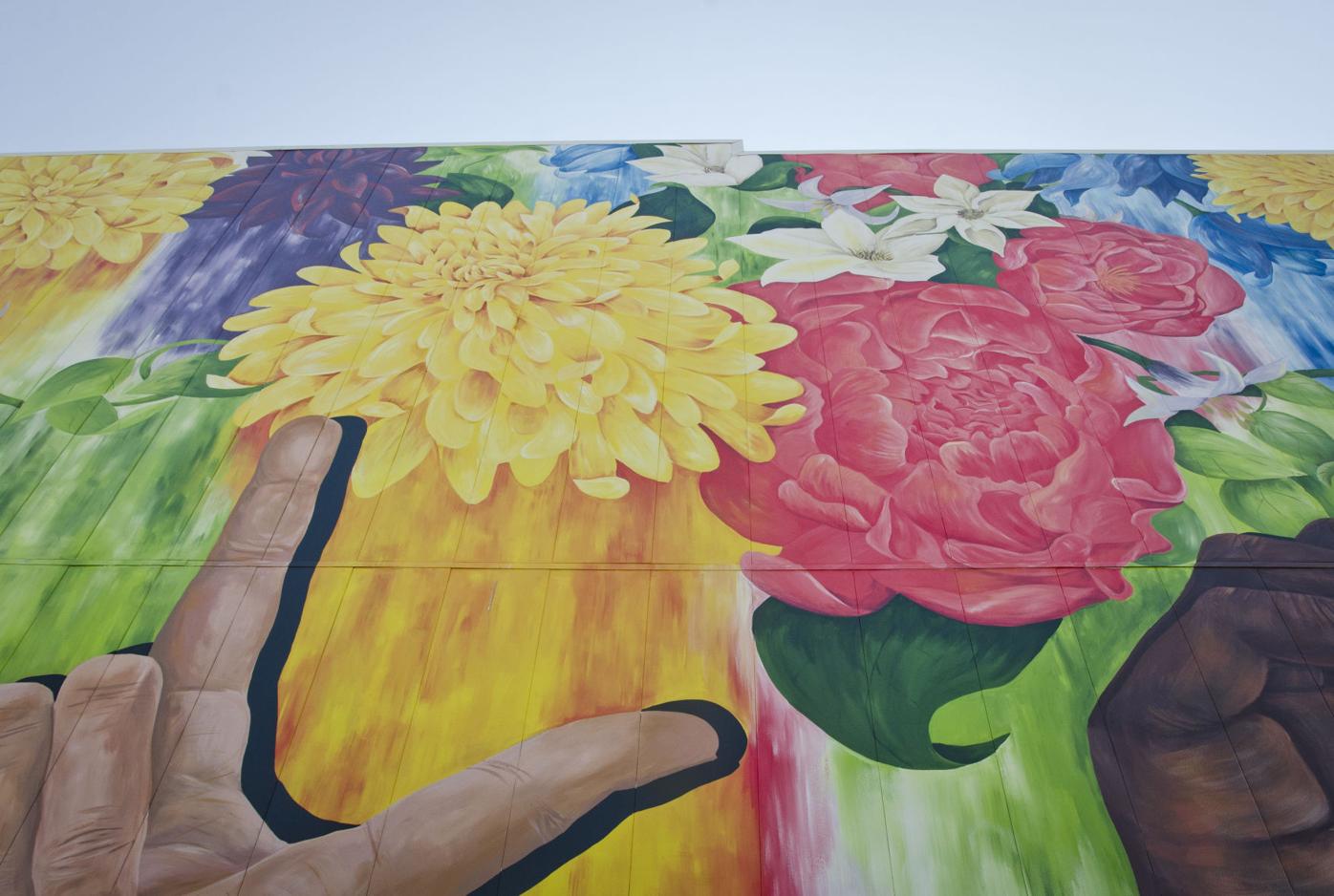 After about 25 days and countless hours under the warm summer sun, Jordyn Brennan's "Love For All" mural is complete.

The Wisconsin native's mural, intended to be vibrant, warm and welcoming, is  on a city-owned wall downtown on First Avenue Northwest (between Third Street and Second Street) and is intended to serve as a reminder to spread love to all.

Among the bright and colorful shades of yellows, greens, blues, pinks and purples is the word "love" spelled out in American Sign Language, braille (without the raised dots) and text. Along with American Sign Language, the mural features the arrangement of dots which make up the letters l-o-v-e, but don't include the raised dots to be read with the fingers by people who are blind or who have low vision. Originally, the plan was to include raised dots on the arranged dots of the letters, but that idea was modified to allow those in need to easily navigate the meaning of the mural. A QR code will be added to the mural to allow for a sign language and audio description of what the mural means.

As the hands use a variety of skin tones, the design also highlights and celebrates Faribault’s growing cultural diversity.

The city of Faribault states the meaning of the flowers included in the mural on its Facebook page:

• Yellow mums reflect mums from Minnesota, which was started by Edgar and Ruth Lehman in Faribault more than 70 years ago. The business has been sold twice over the years but is still locally owned by Faribault Growers Inc.

• The light pink and orange peonies represent the Brand Peony Farm, established in 1870. The Brand’s collection of peony varieties grew to more than 1,000 and earned Faribault the nickname of “peony capital of the world.”

• The white and blue flowers are clematis, and a nod to Donahue's Greenhouse, which grows one of the largest selections of clematis in the country.

• Finally, the small, light violet flowers are Dwarf Trout Lilies, an endangered plant species found only in Rice, Steele and Goodhue counties, including at the River Bend Nature Center.

All along, Brennan said the city was looking for a vibrant place for photo ops, and something for everyone to feel happy, joyful and a sense of pride when looking at. While preparing and executing her physically largest mural to date, Brennan confessed it looked pretty daunting. Once she began putting in the time to create the mural, the process was a little more joyful. She especially enjoyed working with teachers from the Minnesota State Academies for the Deaf and Blind and getting the opportunity to tour both facilities.

Another highlight for Brennan over the last few weeks were the generous community members who stopped by to drop off gift cards, snacks, coffee and/or a warm greeting.

"Everyone was super sweet," Brennan said. "It was so fun to have everyone coming down and stopping over to visit. I work long hours so it's nice to stop and take a little break."

The paint used for the mural is ultraviolet resistant and good for all weather conditions. Brennan also applied a clear varnish coat after completing the mural to protect it from the weather and graffiti, because the paint can be washed off without wrecking the quality of the mural.

Over the last few years, Brennan has had the opportunity to take on progressively larger projects as a mural artist. With each, she says she’s gained an increased understanding of each part of the process, from public consultation to budgeting to design.

Brennan said her favorite part of designing a mural is engaging with the public about art and how it can represent and evoke the stories near and dear to a community. For this project, she wanted a design that would bring people together at a time of division and conflict.

Learn more about Jordyn Brennan and her work at:

See the "Love For All" mural by going downtown Faribault on First Avenue Northwest (between Third Street and Second Street). The mural is on the west side of the downtown building.