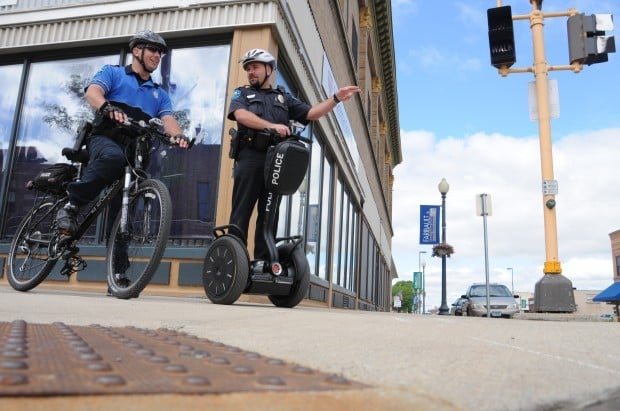 Faribault Police officers Eric Sammon (on bike) and Justin Hunt (on Segway) stand at an intersection on Central Avenue during a five-hour downtown patrol assignment last May. (Rebecca Rodenborg/Daily News) 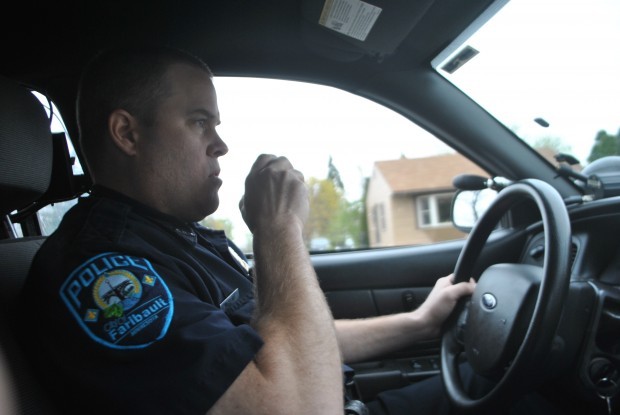 Faribault Police officers Eric Sammon (on bike) and Justin Hunt (on Segway) stand at an intersection on Central Avenue during a five-hour downtown patrol assignment last May. (Rebecca Rodenborg/Daily News)

Complaints of drug activity, theft, and other crime in the downtown business area have been a hot button issue.

But call log statistics recently released by the Faribault Police Department paint a different picture of the level of crime that Central Avenue business owners say they face.

A meeting hosted by Main Street Faribault last week resulted in a possible explanation: Business owners claim they see drug deals going on right outside their window, but they've given up on calling the cops because "nothing changes."

That revelation worries Police Chief Andy Bohlen. In order to know to focus manpower in certain problem areas and on certain crime trends, he says, the numbers need to show that there is a problem.

"When there is a legitimate concern of criminal behavior, we want to get called so we can deal with it proactively," Bohlen told business owners at the meeting on Feb. 25. "Maybe we get there and the suspects have already left the area, but what's important is that we get there and take down what information you can give us so we can document it and have a number to watch."

In 2012, about 90 percent of the calls to Faribault Police from the 000 block of Division to the 600 block of Central Avenue were routine in nature calls-for-service, according to Bohlen.

The Daily News requested data for thefts, burglaries, fights, assaults, and drug activity specifically to capture any trends between 2009 and 2012 in the downtown. Excluding thefts -- a crime that Bohlen has already identified as a community-wide issue -- all of the crime types went down or remained the same in 2012 compared to 2011.

Royal Ross, coordinator of Faribault Main Street, told the Daily News on Friday that he doesn't hear a lot about criminal activity in the downtown area. The concern he hears most often, Ross said, is people congregating in groups on the sidewalks.

"I feel the downtown is safe," said Keilen, who works in the 500 block of Central Avenue. "I feel the overall vision of it not being safe is because people drive up and down the street and see groups of people standing in the sidewalks. But that's not a bad thing. Times are changing, and it's a matter of people getting used to the new look."

But business owners had a completely different take on the issue when they spoke with Bohlen at the Main Street meeting. Several of them, who refused to comment for this story for fear of retribution, listed specific incidents of fights breaking out on the sidewalks and constant drug deals occurring right outside their businesses.

In 2012, six drug complaints were made and 14 fights or assaults were reported. The numbers haven't changed much since 2009.

Bohlen promised the business owners that he is working on a way to increase the police's presence downtown.

"I want our department to be more visible. I want us to be more proactive and less reactive," Bohlen said. "I'm currently examining ways to do that."

For now, patrol officers have been told that if there is "discretionary time" during a shift, to park their car, walk through the business area and make their presence known.

But at the end of the day, Bohlen maintains that the business owners' cooperation -- through reporting any suspected criminal activity as soon as possible -- will only help his department's efforts.

"9-1-1 should be used for anything in progress, you need to just call 911 so we can respond," Bohlen told the business owners. "Trust me, I want your businesses to succeed just as much as you do, but we need to work together here."

A look at the data