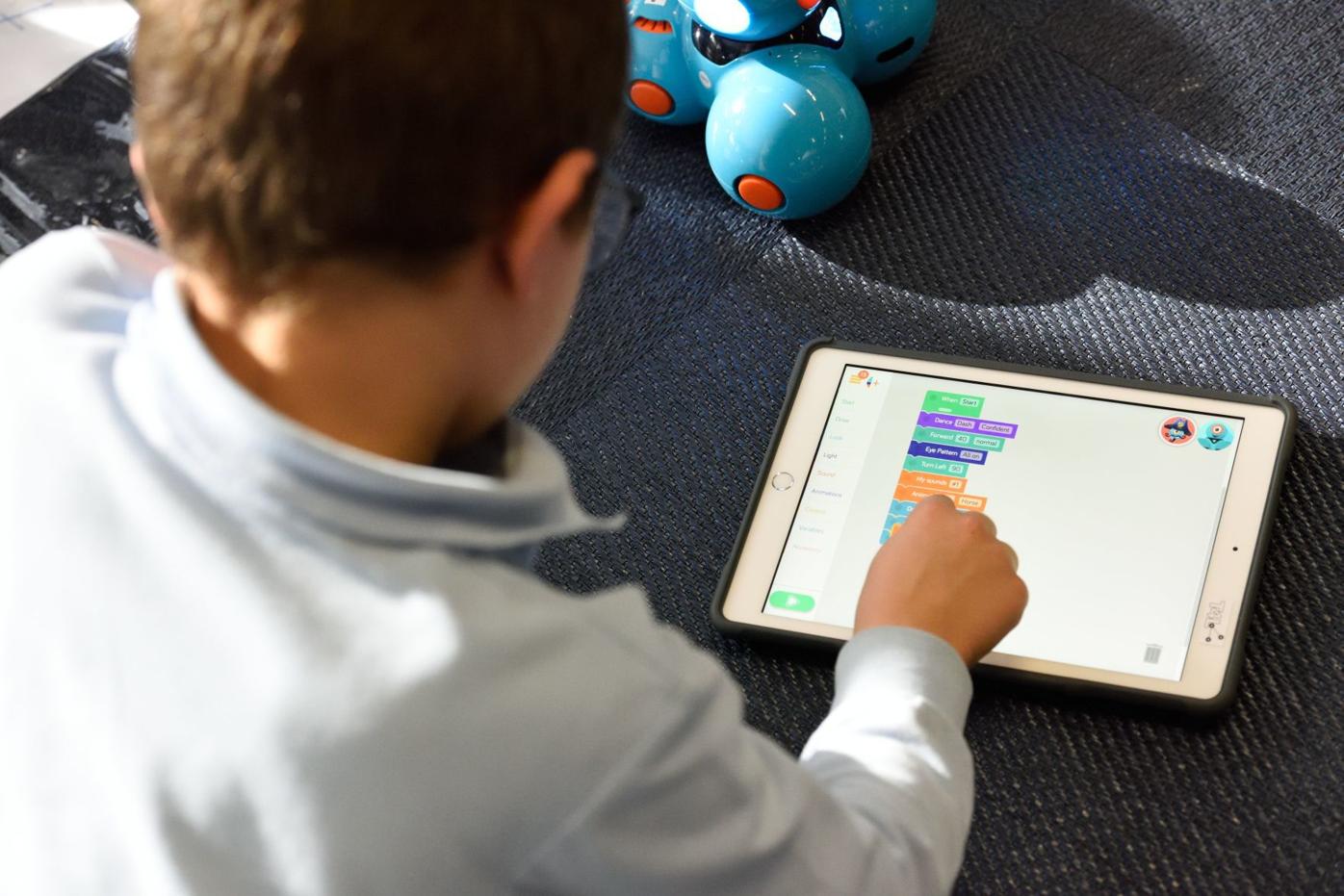 Faribault and Northfield schools are looking to see if CARES Act funding from the federal government can be used to purchase tablets for its students who don’t have access to the technology. (Photo by STEMt4l on Unsplash)

Faribault and Northfield schools are looking to see if CARES Act funding from the federal government can be used to purchase tablets for its students who don’t have access to the technology. (Photo by STEMt4l on Unsplash)

While local municipalities are just figuring out how to spend millions of dollars in one-time funding from the federal government, area school districts have already made plans for how they intend to spend their allocations.

Both pools of funding come from the CARES Act, passed toward the end of March. At over $2 trillion, the bipartisan COVID-19 economic relief plan was the largest in U.S. history, totaling more than 10% of the nation’s gross domestic product. Part of that was $150 billion in relief for local municipalities and an additional $13 billion allocated specifically to school districts. Lawmakers designed the funding to help local units of government weather the economic storm.

Municipalities didn’t receive their funding until recently, because the state government was tasked with deciding how roughly $850 million in funds should be allocated, and Gov. Tim Walz struggled to reach an agreement with the Republican-majority state Senate.

Of the three major cities in Rice and Steele counties, Faribault probably has the clearest idea of how it will spend its CARES Act dollars. City staff have proposed creating a Small Business Relief Fund and stocking it with an initial $500,000 in funding, with the possibility of adding another $500,000.

When it comes to local cities, Northfield will receive about $1.5 million, Faribault approximately $1.8 million and Owatonna approximately $1.9 million. Most other area cities only qualify for $25 per person in assistance, and thus are receiving much less. The third largest city in Rice County, Lonsdale, will receive the most when it comes to small cities, at just over $100,000. Other recipients include Blooming Prairie with about $50,000, Dundas with around $40,000, Medford at just over $30,000 and Morristown at about $25,000.

Businesses with up to five employees could apply for up to $5,000 in relief, while those with six to 50 employees could get up to $10,000. The proposal is slated to be discussed by the Council at its Tuesday work session, with passage possible next week.

Owatonna and Northfield haven’t developed such significant plans yet. Northfield City Administrator Ben Martig noted that an item on the Council’s agenda will enable the city to formally receive the funds, with further discussion slated until next week.

For its part, Owatonna City Administrator Kris Busse said that the city is still working to develop programs in accordance with federal guidelines. She suggested that the city would likely consider investing in cleaning supplies as well as starting a business assistance program, like the one proposed in Faribault.

As it has more than 65,000 residents to tend to, Rice County is the region’s largest recipient of CARES Act Funding. Rice will receive more than $8 million in funding according to the state’s formula, while Steele County will receive close to $4.5 million.

The funds to school districts were allocated on a much different basis, with more funding allocated to districts with a greater number students eligible for free and reduced-price lunches. As a result, Faribault Public Schools received more than twice as much funding as Northfield schools.

Although the two districts are close geographically, they have dramatic socioeconomic differences. With just 26% of students eligible to receive free or reduced-price lunches, Northfield is well below the statewide average of 37%.

In total, Northfield School District will receive about $380,000 in funding, while Faribault will receive more than $900,000. However, a portion of Faribault’s funding remains unallocated, and a very small slice will go to Bethlehem Academy, Divine Mercy Catholic School and Faribault Lutheran School.

While Faribault and Northfield may be on opposite ends of the spectrum, Owatonna falls somewhere in the middle when it comes to socioeconomic conditions. Thus, the district will receive $625,000 in funding, according to Superintendent Jeff Elstad.

For both Northfield and Faribault, that means completing the districts’s mission to provide every student with an iPad. Currently, some elementary school students don’t have a tablet of their own, which has disadvantaged some students during distance learning.

Hillmann said that the district will also spend a portion of the money to buy Wi-Fi hotspots for students in need and enable teachers to place a call from their school account. Both initiatives could help students be more productive in any potential distance learning environment.

The districts are also exploring whether some of the funding could go to covering expenses incurred over the last few months, as districts implemented emergency measures to ensure that children from low-income families remained well fed and taken care of.

Under guidance released by the Minnesota Department of Education last month, Districts have been asked to prepare for three different potential scenarios for next school year — a distance learning model, traditional in class model with protections, and a hybrid of the two.

While it’s too early to know when exactly each model might need to be used, both districts are using a portion of their CARES Act fund to ensure they’re prepared. That means stocking up on supplies and planning for increased use of digital learning.

Though it may be unprecedented in size, Hillmann said that the funding isn’t likely to be enough to shield the district from funding shortfalls. That’s because Northfield, like other districts throughout the region, relies heavily on state aid to cover expenses.

When the pandemic and accompanying business closures abruptly reversed a decade of economic growth in Minnesota and across the nation, a $1.3 billion projected budget surplus was turned into a $2.2 billion deficit almost overnight.

That’s a particular challenge for the state, which can’t borrow to cover general expenses. Legislators could tap into the state’s rainy day fund, which was created in the wake of the 2008 financial crash and grew over the last decade.

However, the fund totals just $2.4 billion, barely enough to cover one year of the sizable projected deficit. Should the pandemic-induced economic downturn last much longer, legislators would have to consider spending cuts and/or tax increases.

At the same time, districts have played a critically important role during the pandemic, supporting low-income families by providing everything from meals from children to much needed childcare for kids of essential workers.

Hillmann said the district certainly doesn’t regret implementing those programs, but they have come at a significant financial cost. Describing the CARES Act funding as a “minor measure,” he said it won’t begin to cover those costs let alone make up for years of stagnant funding.

“The CARES Act is a stopgap measure, and it’s not even a very good one,” he said. “Our revenues still don’t cover our costs.”

Hillmann said the issue long predates COVID, as the state has provided an increase to the per-pupil basic formula just five times in the last 27 years. While the district has managed to avoid cuts for a decade, they’re back on the table for the 2021-22 school year.

Unless the state or federal governments are able to provide additional funding, Sesker warned that Faribault will have to look at cuts as well. Given the dire economic situation and tight state budget, he said he’s not particularly optimistic that the district will see additional dollars from the state.

This article has been updated to reflect clarification on the Northfield School District's plans from Superintendent Matt Hillmann.

Municipalities didn’t receive their funding until recently because the state government was tasked with deciding how roughly $850 million in funds should be allocated, and Gov. Tim Walz struggled to reach an agreement with the Republican-majority State Senate.

While Walz had the power to allocate the funding unilaterally, he expressed a desire to give the legislature the opportunity to hash out its own funding bill. A bipartisan bill authored by Sen. Julie Rosen, R-Vernon Center, subsequently breezed through the Senate by a 62-4 vote.

Rosen’s bill allocated funds to each community based strictly on head counts, with just over $75 per person going to cities with more than 5,000 residents or fewer than 200 residents. Communities with between 200 and 5,000 residents received just $25 per person. In addition, each county received just over $120 per person, excluding Hennepin and Ramsey Counties. The state's two largest jurisdictions were excluded because as they have more than 500,000 people, they received their funding directly from the federal government.

The formula frustrated some DFL legislators who preferred to see more funding for the hardest hit and most vulnerable areas. However, Rosen and other legislators defended it as the fairest approach, arguing that municipalities across the state have had to prepare for COVID, and hotspots have popped up in both urban and rural areas.

While the legislature was unable to send a unified compromise bill to the governor’s desk, Walz used his executive authority to allocate the funds along the per-person formula in the Senate bill. In a statement, Rosen applauded the move.

“We worked together to come to a compromise in the legislature and it’s good to see the governor following the lead of Senate Republicans and legislature to fairly distribute these funds,” she said. “These are dollars our local communities need to address the growing financial burden from the costs of fighting COVID, along with lost revenue due to COVID. I’m very happy the funds are finally going to be fairly distributed to where they are needed.”