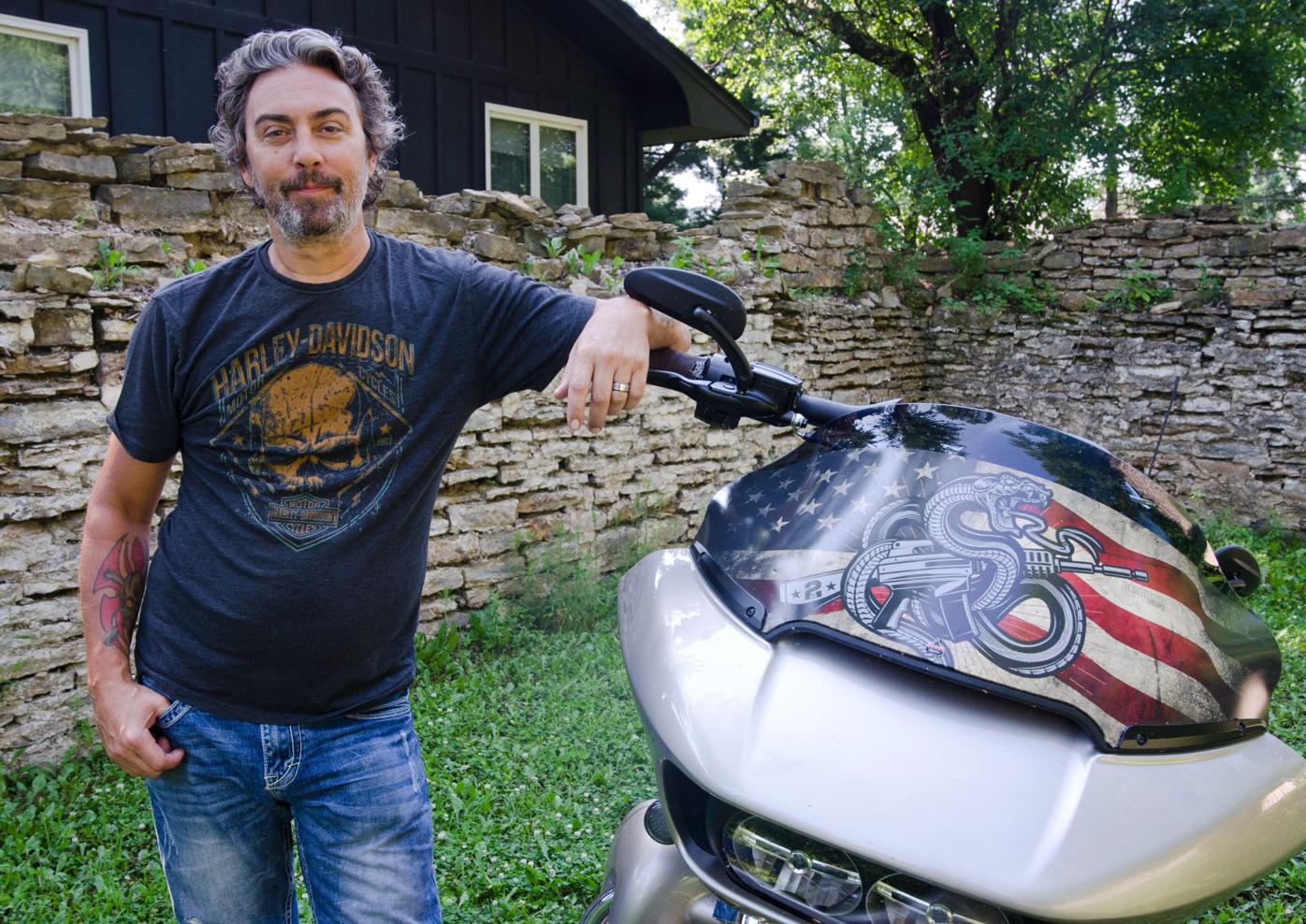 Mark Anthony moved to Faribault a year ago to find a place to sell his motorcycle windshield products, SMAKK’D Wraps. He sells his products online and at BR Cycles in Faribault. (Michelle Vlasak/southernminn.com) 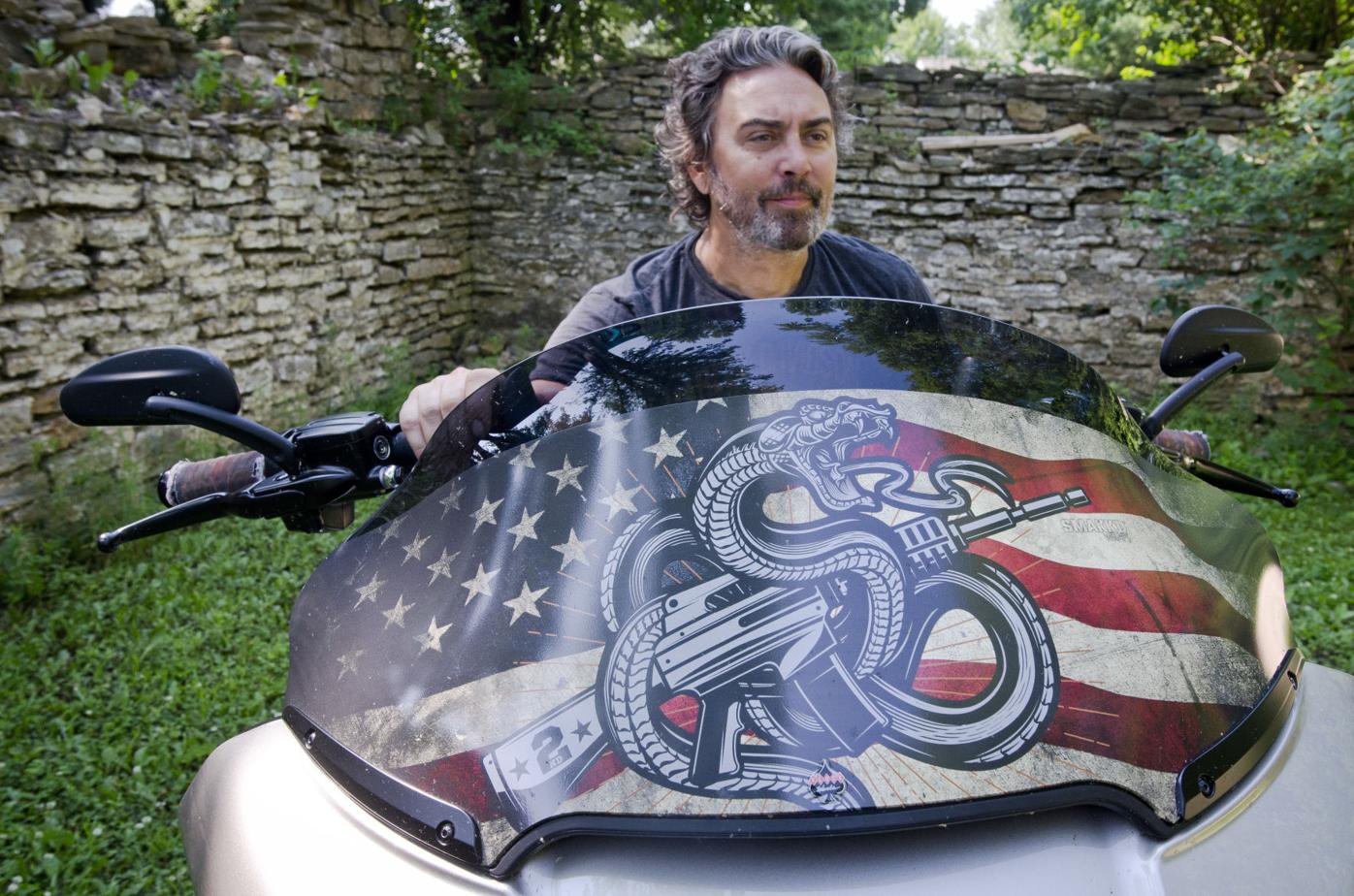 SMAKK’D Wraps, a product designed by Faribault resident Mark Anthony, pictured, give motorcyclists a new way to make their bikes stand out. The wrap called “Second Amendment” is one of his most popular products. (Michelle Vlasak/southernminn.com)

Mark Anthony moved to Faribault a year ago to find a place to sell his motorcycle windshield products, SMAKK’D Wraps. He sells his products online and at BR Cycles in Faribault. (Michelle Vlasak/southernminn.com)

SMAKK’D Wraps, a product designed by Faribault resident Mark Anthony, pictured, give motorcyclists a new way to make their bikes stand out. The wrap called “Second Amendment” is one of his most popular products. (Michelle Vlasak/southernminn.com)

Mark Anthony began riding motorcycles soon after he was born, instilling in him a lifelong passion that inspired a creative new project.

You might say he got “SMAKK’D” with an idea. His product, SMAKK’D Wraps, cover the windshields of motorcycles with images he designed himself. Anthony’s brother, who lives in New Whales, Florida, became his business partner soon after the company launched in March.

“No one has been wrapping motorcycle windshields, and a lot of people don’t want to spend a ton of money changing their bike but want to differentiate themselves from somebody else,” Anthony said. “That’s how I created our company.”

Last year, Anthony and his wife, Brenda, moved to her hometown of Faribault looking for a place to run his business. He offices out of their home, but rather than having his own storefront, sells his products online and on the road. The Faribault retailer BR Cycles has SMAKK’D Wraps for customers to purchase in person.

Prior to launching SMAKK’D Wraps, Anthony worked in the hair industry as a trainer, educator and stylist. This allowed him the opportunities to travel in his 32 years as a hairdresser. Traveling is also part of Anthony’s work now, selling SMAKK’D Wraps.

“Clients have been responding great,” Anthony said. “We just did an event down in Blue Earth, and the response was fantastic, and this weekend we’re working with Faribault Harley. They have an event this Saturday. Next weekend we’ll be at Big Guys BBQ Roadhouse in Hudson, Wisconsin. Then we’re going to be at the Iron Horse Campground in Sturgis from Aug. 2 to 13.”

For some of his events, Anthony brings his trailer to do on-site sales and installations of the SMAKK’D Wrap products. The process, he said, takes 10 to 30 minutes depending on the size of the windshield.

“We are just accumulating a team of installers, and we’re also having conversations about possibly franchising our company,” Anthony said. “We can’t be everywhere at once.”

While Anthony designs most of the products himself, he allows customers to send him images they would like to see “SMAKK’D” on their motorcycle windshields. He’s also open to hearing design ideas from customers.

Josh Gallup, of Dundas, one of Anthony’s first customers, helped personalize the design for the SMAKK’D Wrap he has on his motorcycle. After having it on his bike for a few months, he said it’s holding up well.

“I’ve seen people put vinyl on their windshield but it’s a different level, a higher level,” Gallup said of SMAKK’D Wraps. “Some of the things looked like something they did themselves, and Mark’s looks like a high quality item. It looks professional.”

“I have a lot of military in my family, and I think it’s a great organization to be involved with, so I want to be able to work with them,” Anthony said of the Military Family Foundation.

As for the Cancer Awareness Fund, he said, “Being a stylist as long as I have, I’ve known a lot of people who’ve had breast cancer, died from breast cancer or are still living with breast cancer, so I feel very strong about donating to those funds.”

SMAKK'D Wraps are available online at smakkdwraps.com and at BR Cycles in Faribault.

Mark Anthony will be at Harley-Davidson Faribault's customer appreciation day selling his products from 9 a.m. to 4 p.m. Saturday, July 17.