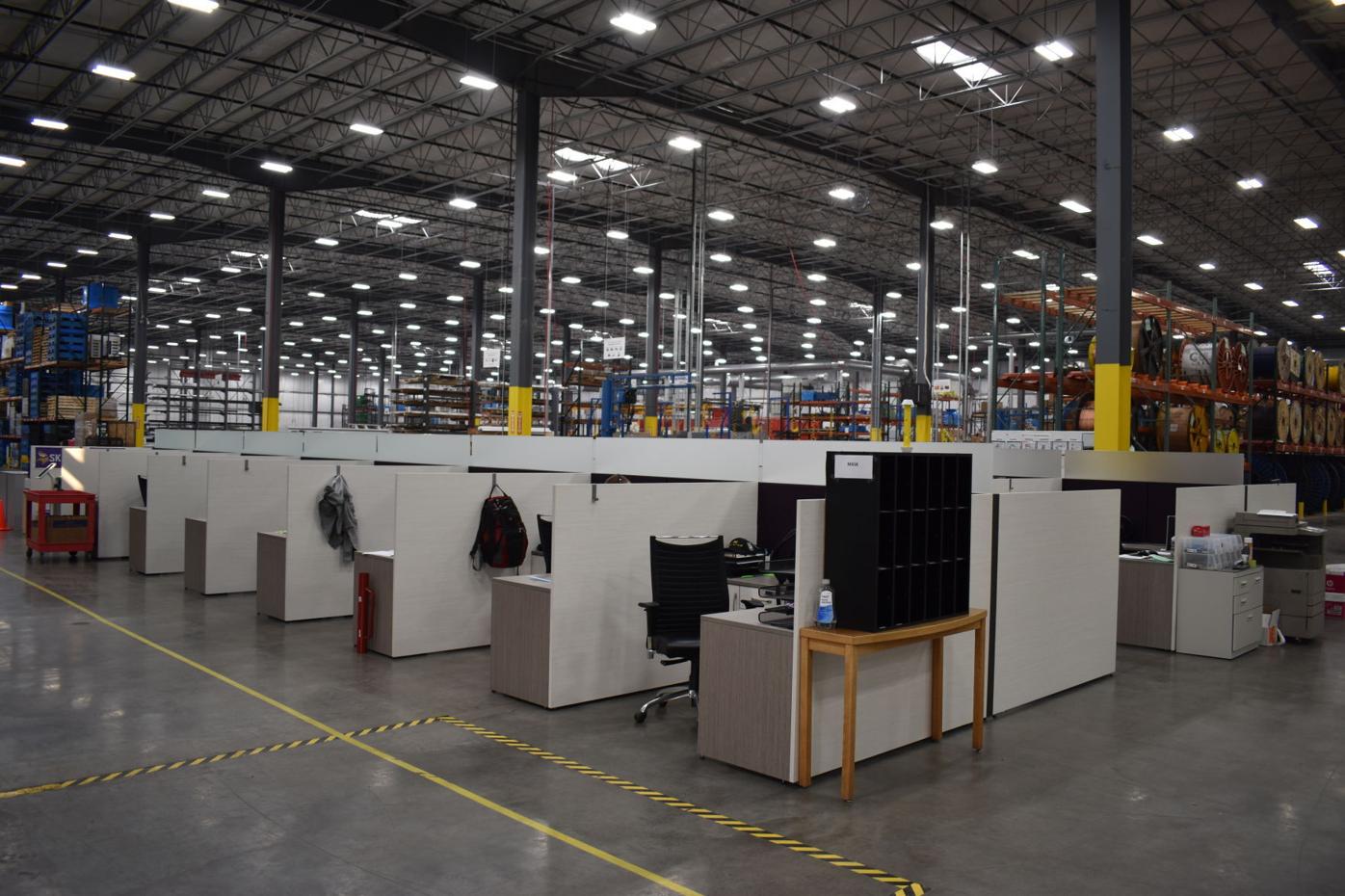 Until Met-Con completes a 20,000 square-foot addition, Trystar's sales staff are working in small cubicles on its factory floor. (Andrew Deziel/southernminn.com) 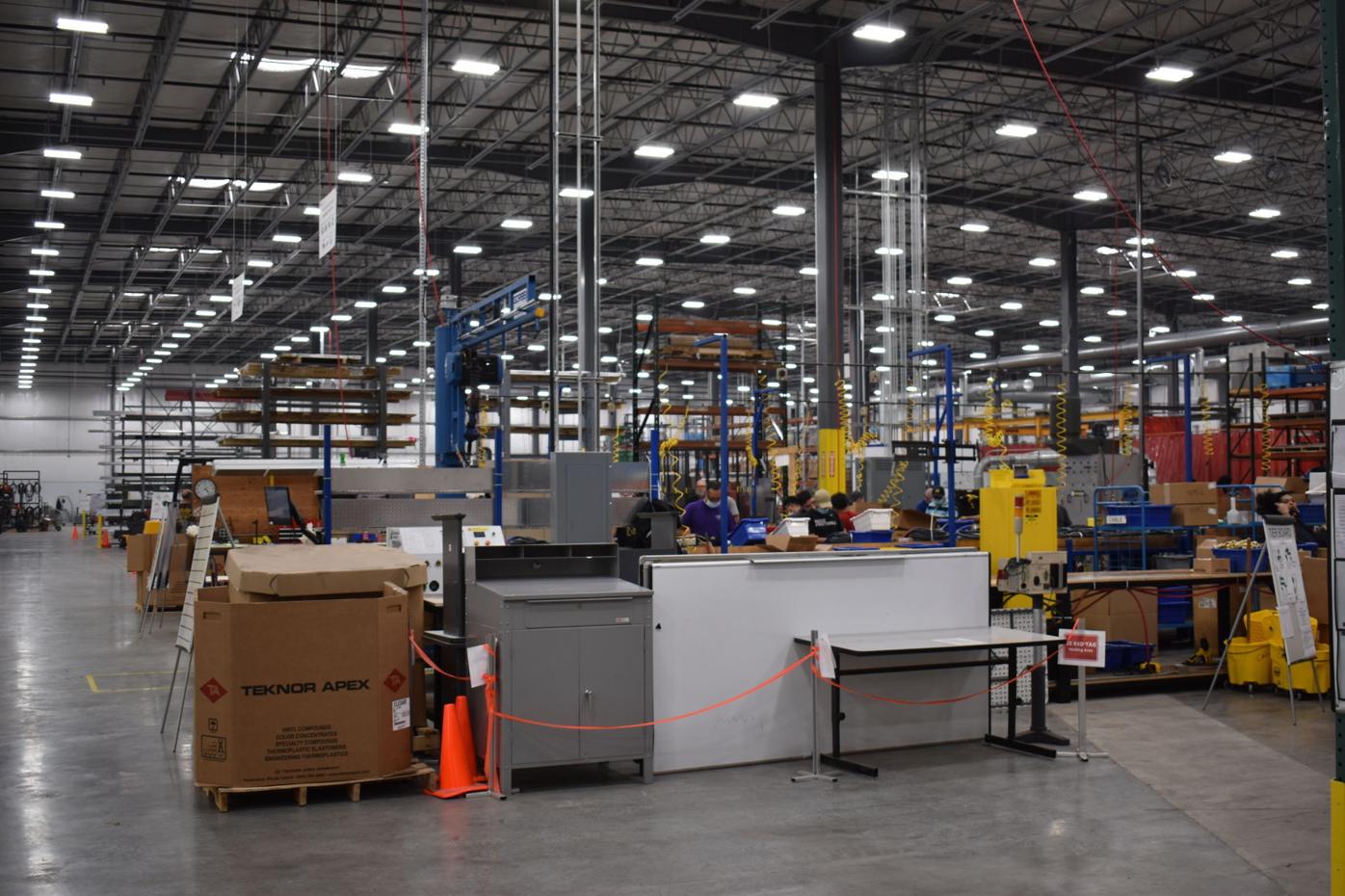 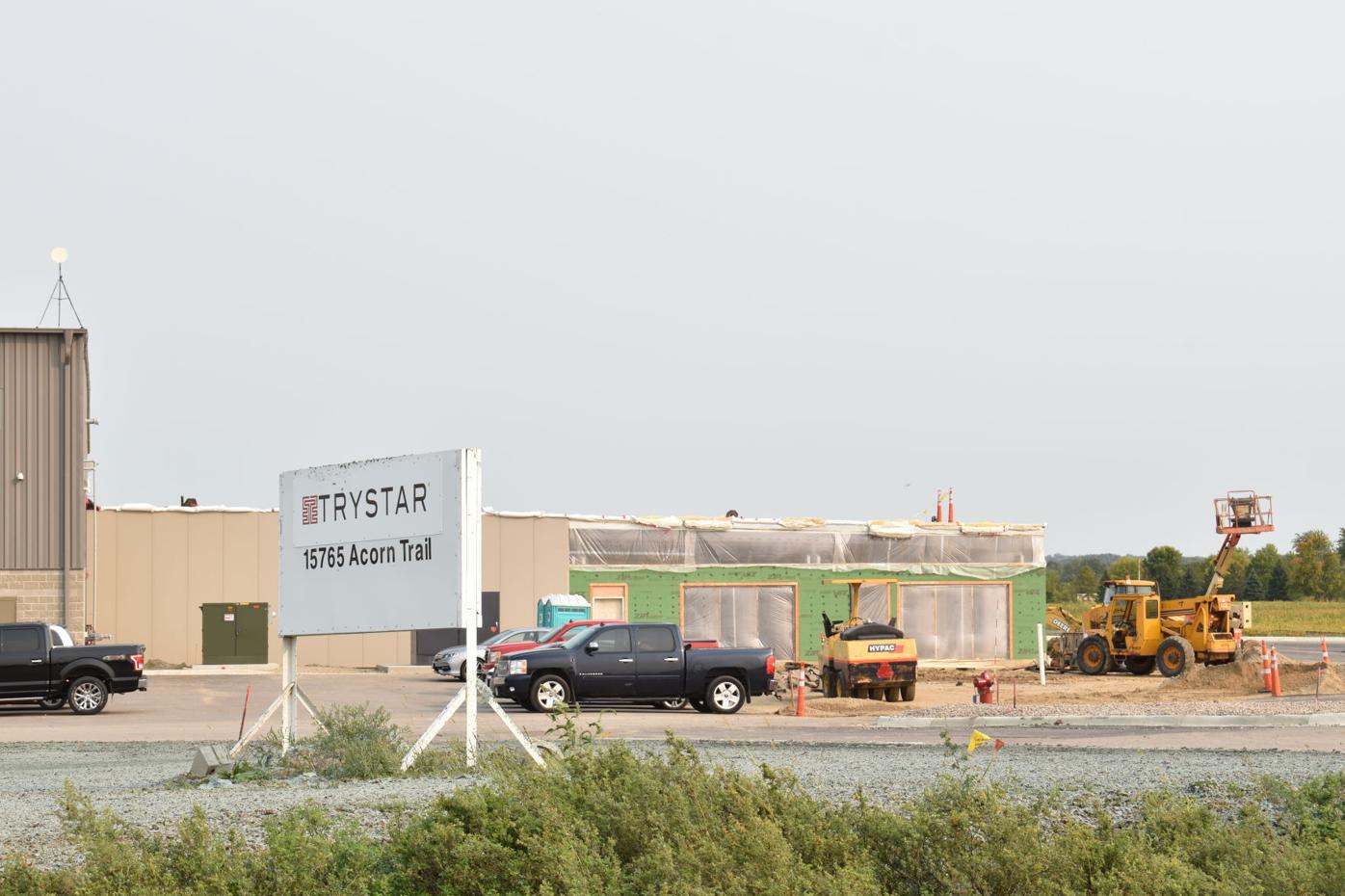 This 20,000 square-foot addition, once complete, will house some of Trystar's office staff. (Andrew Deziel/southernminn.com) 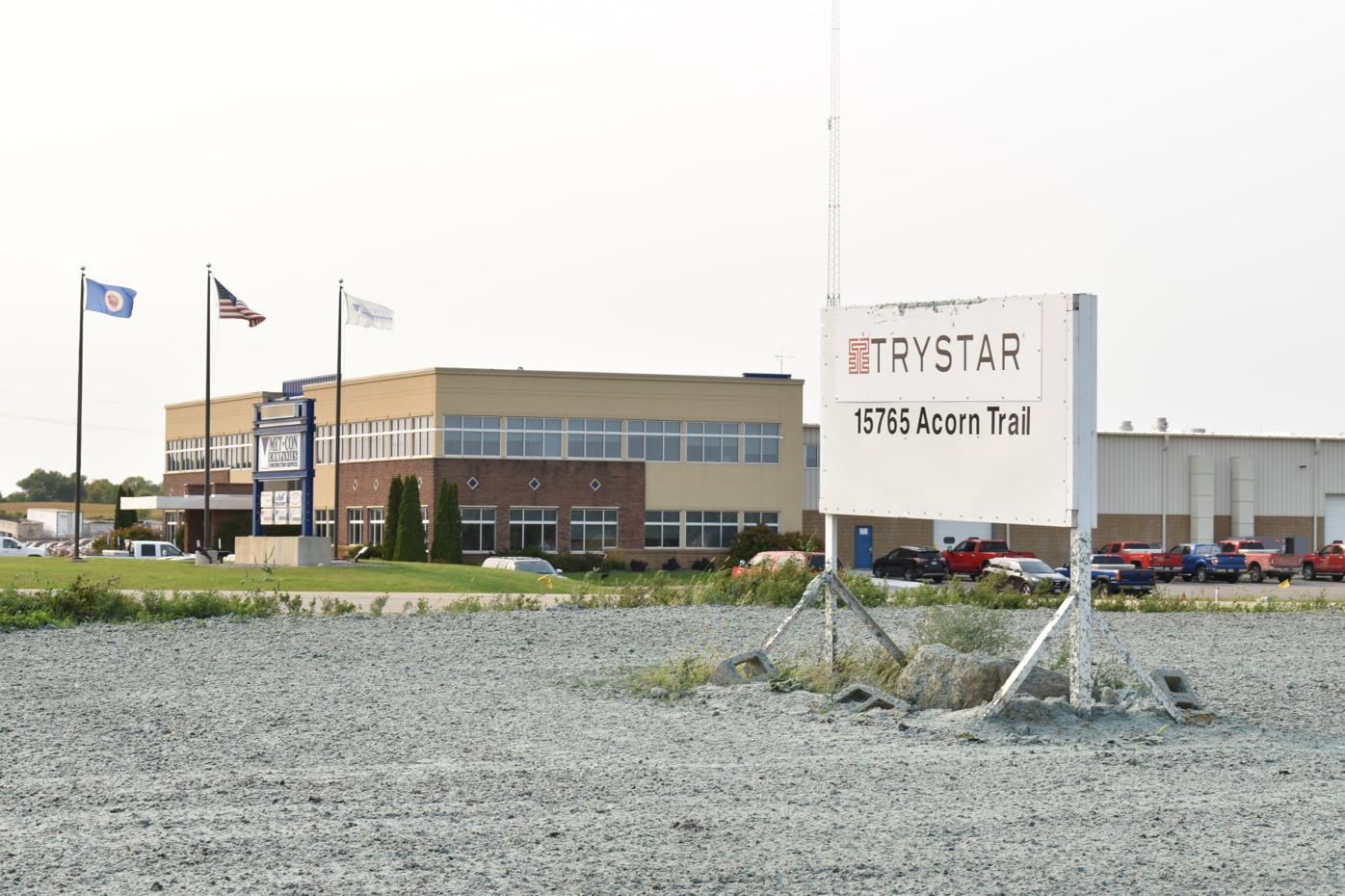 Trystar's new facility sits just across the road from Met-Con Cos., with which it has had a longtime partnership. (Andrew Deziel/southernminn.com) 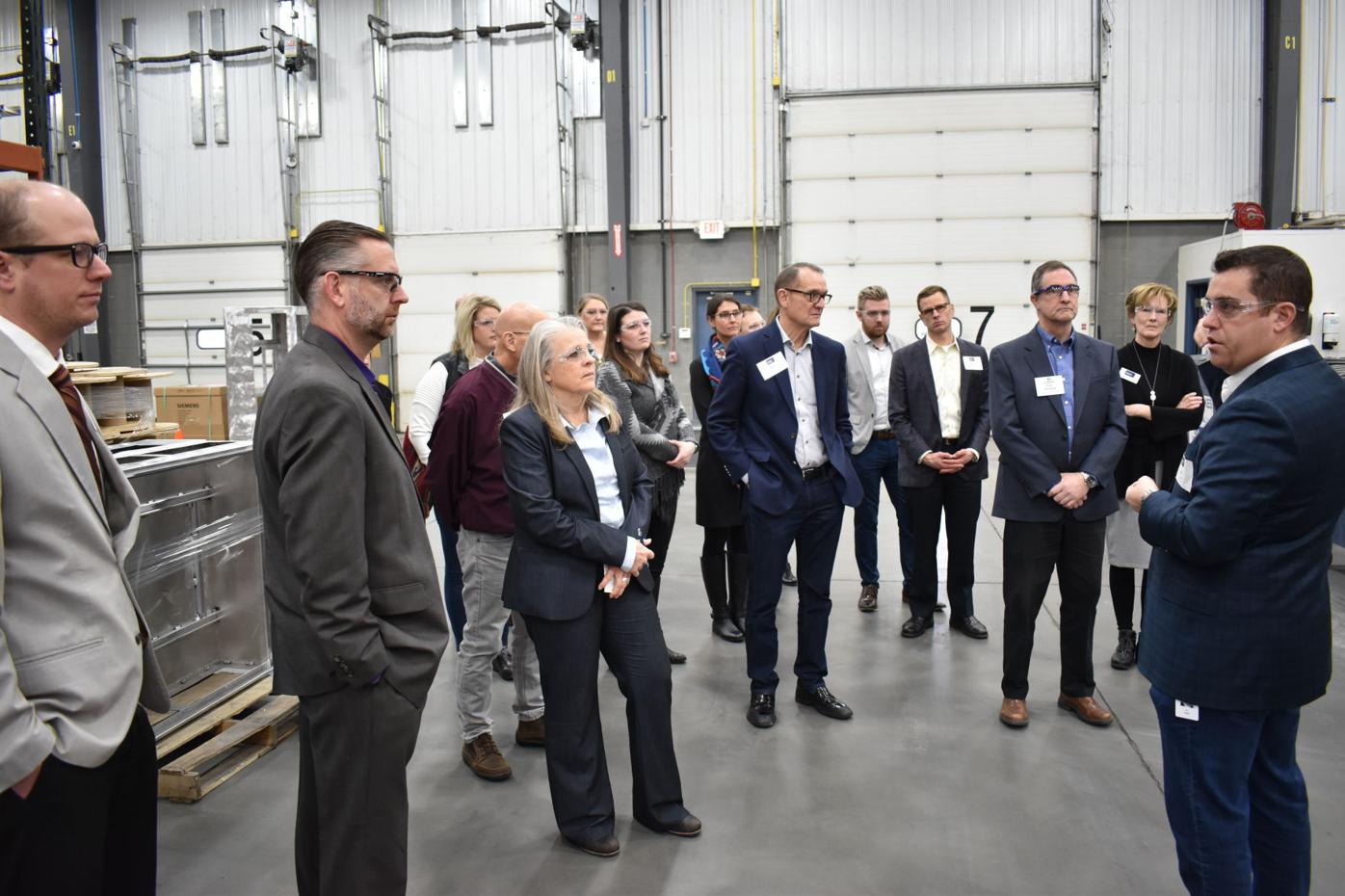 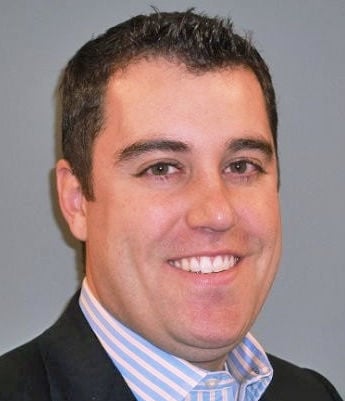 Until Met-Con completes a 20,000 square-foot addition, Trystar's sales staff are working in small cubicles on its factory floor. (Andrew Deziel/southernminn.com)

This 20,000 square-foot addition, once complete, will house some of Trystar's office staff. (Andrew Deziel/southernminn.com)

Trystar's new facility sits just across the road from Met-Con Cos., with which it has had a longtime partnership. (Andrew Deziel/southernminn.com)

With support from the city of Faribault and Rice County, a homegrown Faribault business is settling into roomy new digs that will enable it to stay and grow locally for years to come.

Founded in 1992 by Rick Dahl, Trystar manufactures temporary electrical power units for commercial and emergency services purposes. Its products are particularly in demand when natural disaster hits — and they’ve been in demand more than ever in recent months. The commercial side of its business, which typically produces units for large events and festivals, has been flattened by the pandemic. However, that’s more than been made up for by the emergency services side.

In addition to producing units for testing stations and other emergency medical uses, Trystar has seen significant demand as hurricane season gets into full swing. According to CEO AJ Smith, August was the company’s busiest month ever.

Even before the pandemic, Trystar had seen robust demand and growth for years. With a reputation for quality and an ability to get its products to customers in a timely fashion, it won devoted customers from all over the world.

Since 1997, Trystar has worked closely with Faribault's Met-Con Cos. to meet its space needs as they increased. By last year, the company had 150 full-time employees in Faribault and even more during peak times, but they were spread out over no fewer than five facilities. While all of those buildings are located in north Faribault’s industrial park, Smith said the arrangement hindered the company’s efficiency. The company sought a solution as far back as 2012, but a proposed 170,000 square-foot facility in Shakopee never came to fruition.

Efforts to address Trystar’s space situation kicked into high gear again in 2018, when Dahl sold the company to Goldner Hawn Johnson & Morrison, a Twin Cities-based equity firm which quickly brought in Smith, a former Honeywell executive, to run the ship.

After more than a decade at the much larger Honeywell, Smith turned his focus to taking an informed but unique approach at the much smaller Trystar. One of his first moves as CEO was to open a new office in Burnsville.

Smith has said that the new location has proven to be a recruiting tool for Twin Cities-based workers. It’s also convenient for customers, thanks to its proximity to the Minneapolis-St. Paul International Airport, though Trystar does most of its actual product shipment via land.

Smith then turned his attention to dealing with Trystar’s space problem. Despite the company’s investment in Burnsville, Smith said his goal was to keep the company’s main location in Faribault, enabling it to maintain existing partnerships and avoid uprooting its workforce.

Initially, Trystar and Met-Con explored the option of expanding one of the company’s existing Faribault locations. However, they discovered that under the current building code, none of those sites could be expanded sufficiently to meet the company’s needs.

While it was not the company’s preference, Trystar expanded its search to include potential sites in Burnsville and Lakeville. There, it found several sites that could accommodate current needs and future growth for an affordable price.

As an effort to stay in town, Trystar inquired about a 100,000-square foot warehouse recently constructed by Met-Con. It was built for the Cheese Cave, Faribault Foods and SageGlass, but those companies expressed interest in moving into the facilities Trystar would vacate instead.

While this option could meet the needs of all companies, it would cost about $550,000 more for TryStar than comparable options in the south metro. About $400,000 of this was due to higher rent over a period of time, and $150,000 to accommodate needed building modifications.

Because the project wouldn’t be tied to a new company or new jobs, get funding from it from traditional economic development agencies was a challenge. Instead, Rice County and the city of Faribault stepped in.

To city and county officials, the move was largely uncontroversial. According to a memo from Faribault Community and Economic Development Director Deanna Kuennen, 80% of a city’s new jobs and investment traditionally come from existing firms.

“If we tried to attract a new company to Faribault, it would probably cost 10 times this amount,” Faribault City Councilor Tom Spooner said in March. “The amount that we’re going to put into tax abatement to retain this company here seems to be a no-brainer for me.”

Faribault’s Economic Development Authority joined the city and county in the investment, approving a $100,000 loan, forgivable after five years. The remaining $450,000 was covered via tax abatement. In a tax abatement district, additional value due to development is diverted to cover the cost of development. In total, the city’s portion of the abatement was $260,040, with the county covering $189,960. Both agreements stretch out over a 10-year period.

With help from Met-Con and the companies which had previously occupied the building, Trystar was able to move into the new facility in July. However, the project isn’t quite done yet, with a 20,000 square-foot office addition not scheduled for completion until November.

In the meantime, Trystar’s office staff have been huddled in workstations on the factory floor. Smith said with a laugh that they’ve had to get a bit creative, wearing headphones to block out most of the noise and enable them to do their job.

Ironically, the pandemic provided a slight boost to Trystar’s efforts to move into its new facility. Smith said that when it hit, the demand for Faribault Foods’s canned goods spiked so dramatically that it suddenly no longer needed the extra storage space in the facility.

SageGlass was the other main occupant of the 100,000 square-foot building, with Prairie Farms only occupying a small portion of the space. Smith praised SageGlass’s efforts to make the move as seamless as possible.

“It took a lot of coordination, but they made it easy for us because they were so collaborative,” he said.

For his part, Met-Con’s Troy Zabinski said he was pleased to have been able to find a solution that worked for everyone involved. Like Trystar, Met-Con is a home-grown business, started by Faribault native Tom McDonough out of his garage in the late 1970s.

Smith praised Met-Con’s work, describing the new building as “state of the art.” He said that the roomy new facility fits Trystar’s needs “perfectly” and will serve as a solid “foundation for growth.”

“It’s very difficult to deal with these times, but this will set us up to grow and increase our business over time,” he said. “We’re so glad to have found a place 3 miles up the road didn’t disrupt our operations.”

'If we tried to attract a new company to Faribault, it would probably cost 10 times this amount. The amount that we’re going to put into tax abatement to retain this company here seems to be a no-brainer for me.'