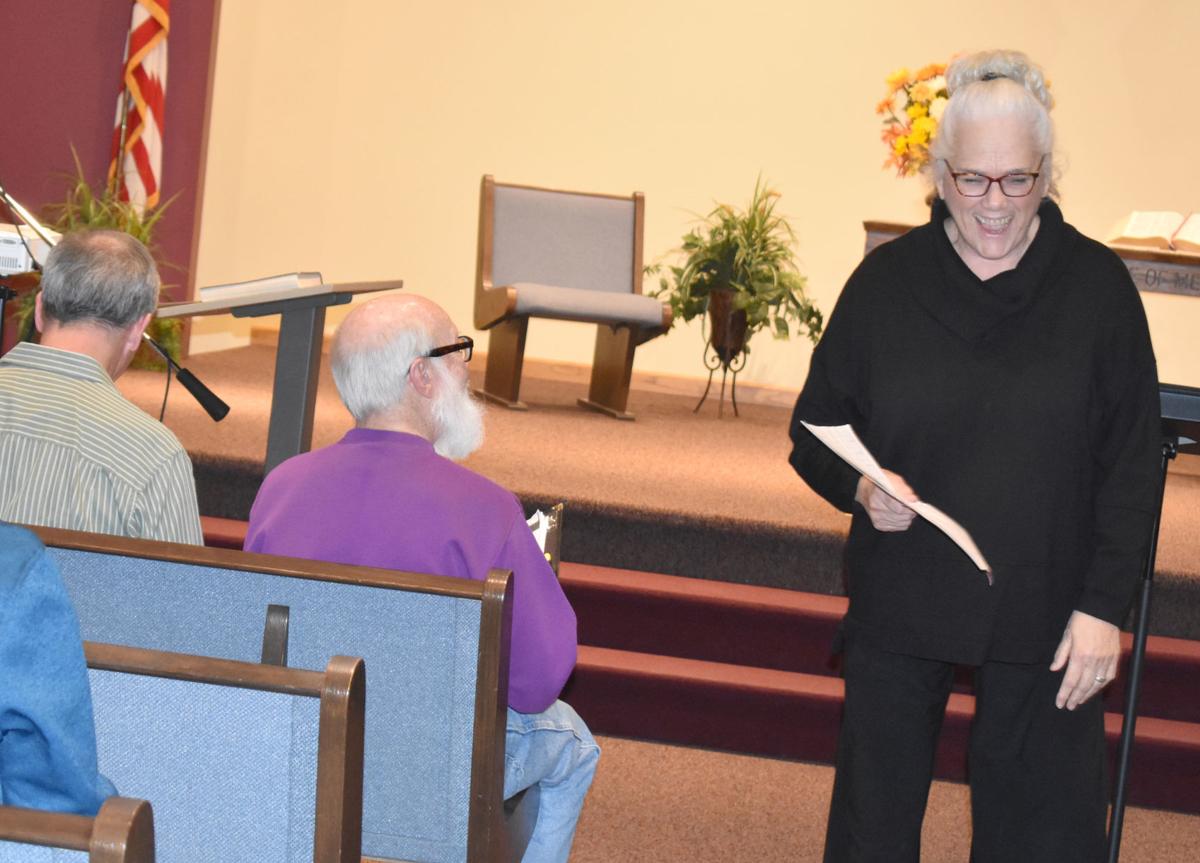 Beau Chant director Dione Peterson Belling likes to accomplish as much as possible during Monday evening rehearsals, but that doesn’t mean there isn’t time for fun. (Misty Schwab/Faribault Daily News) 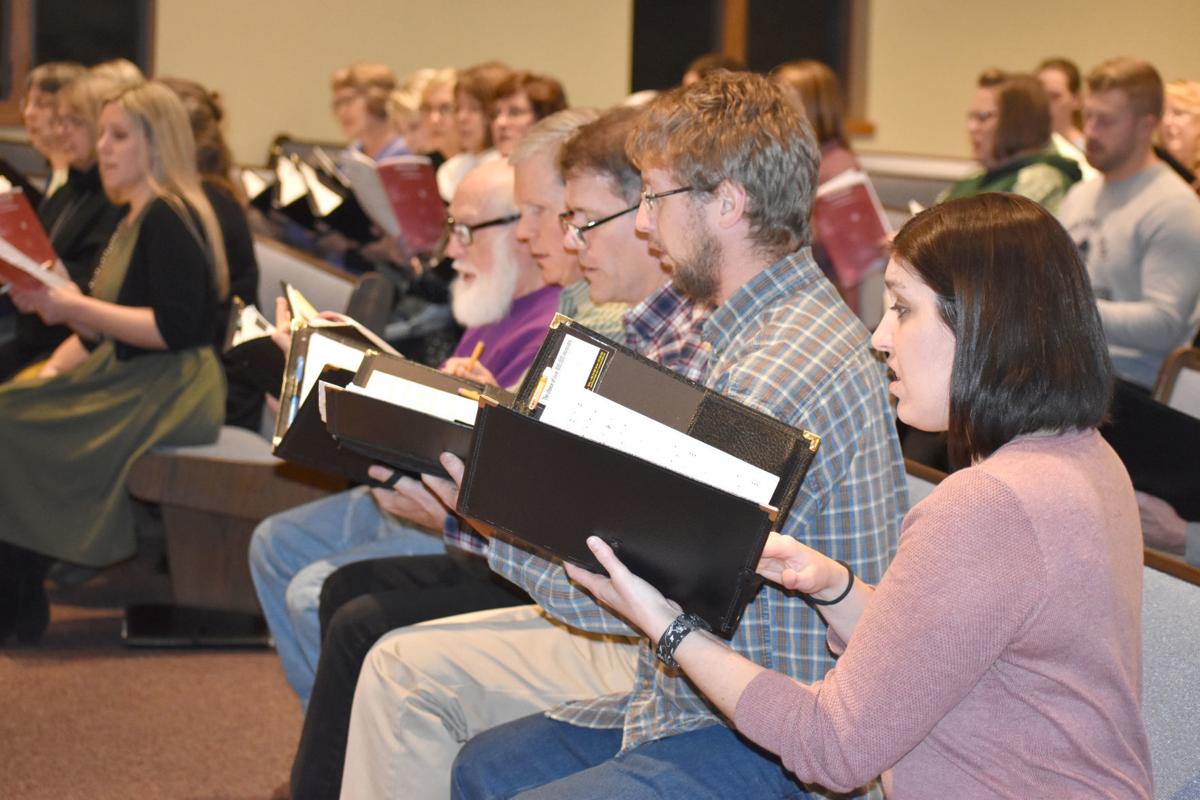 Beau Chant members are in their early 20s, early 80s, and any age in between. The group of about 55 members rehearses at Bethel Ridge Church each Monday evening. (Misty Schwab/Faribault Daily News) 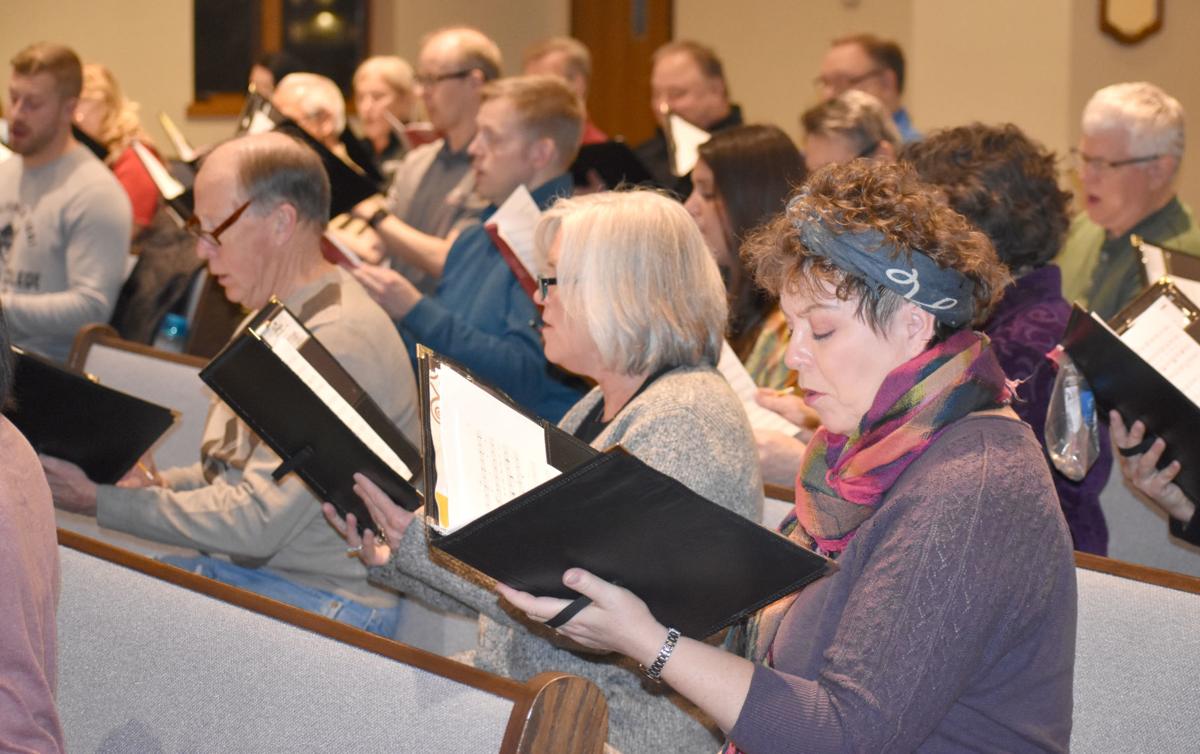 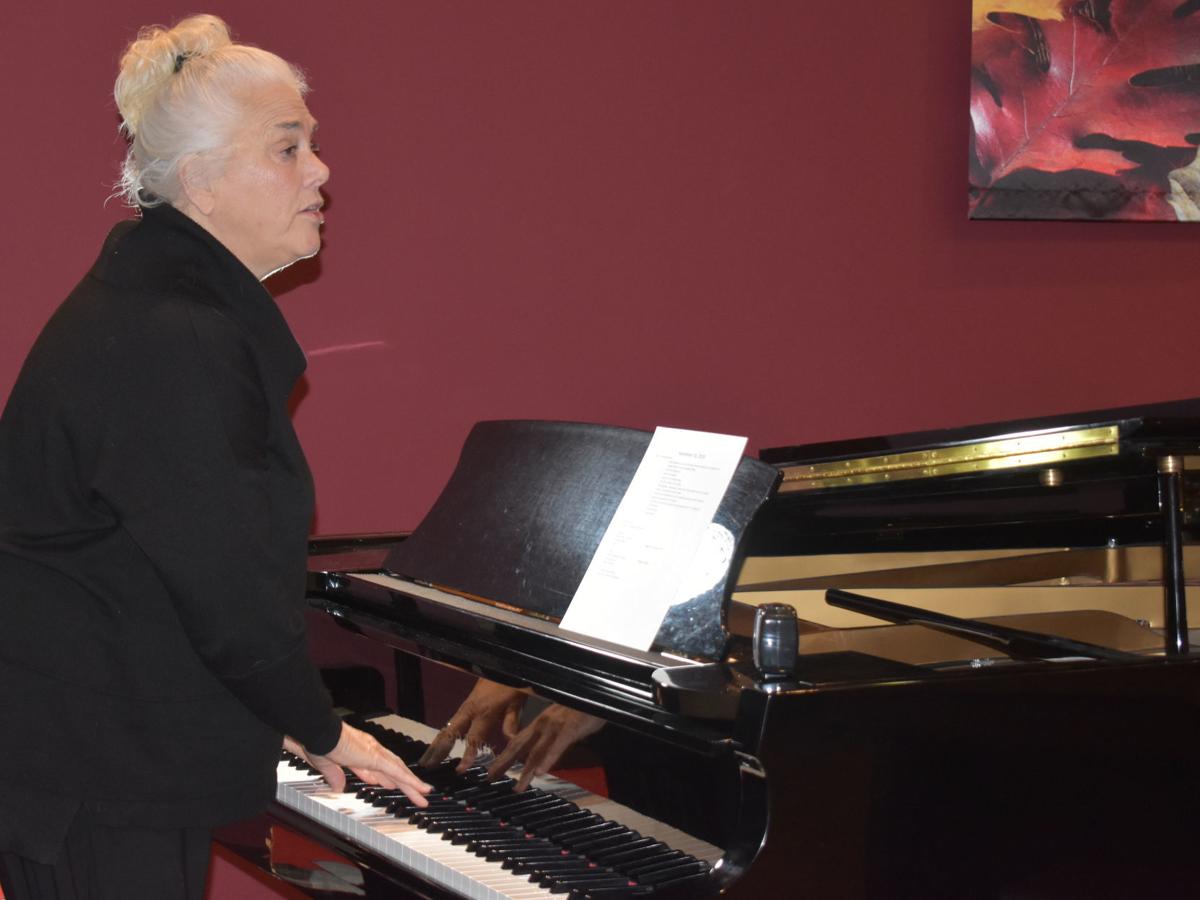 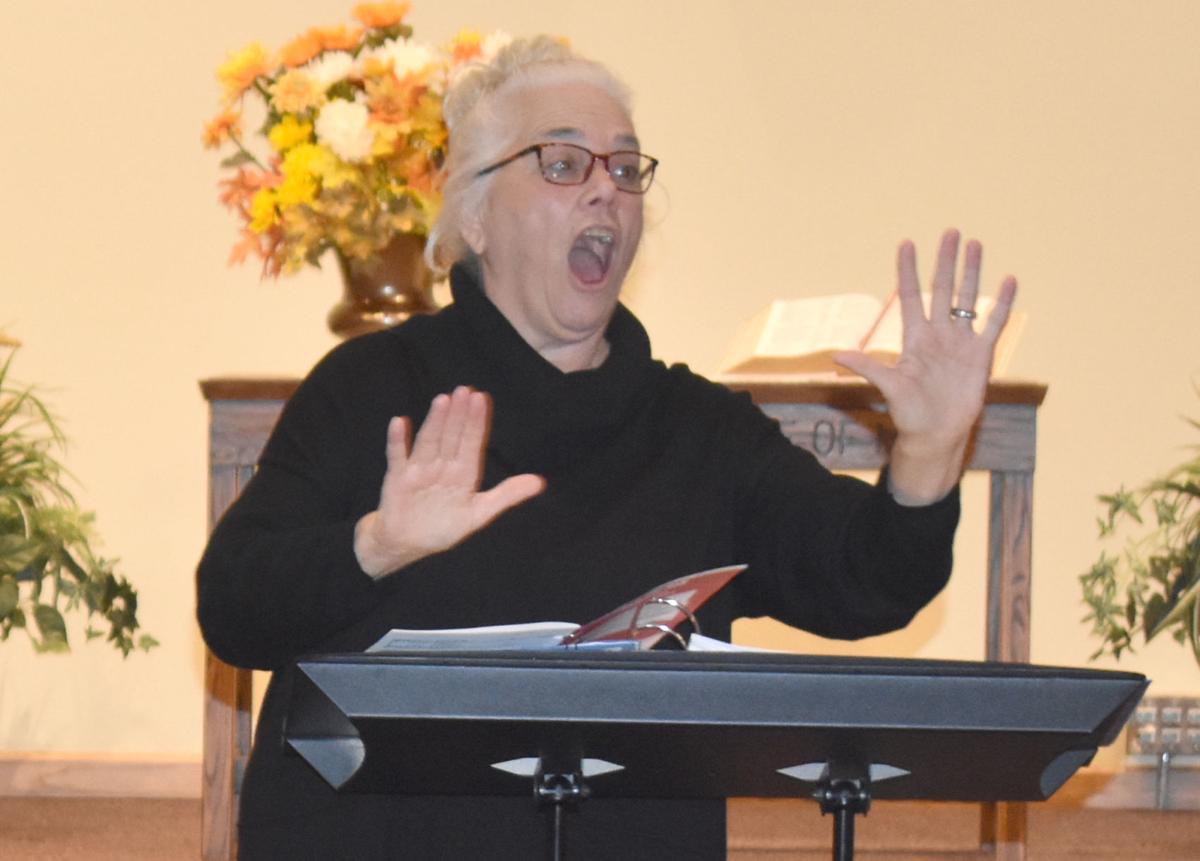 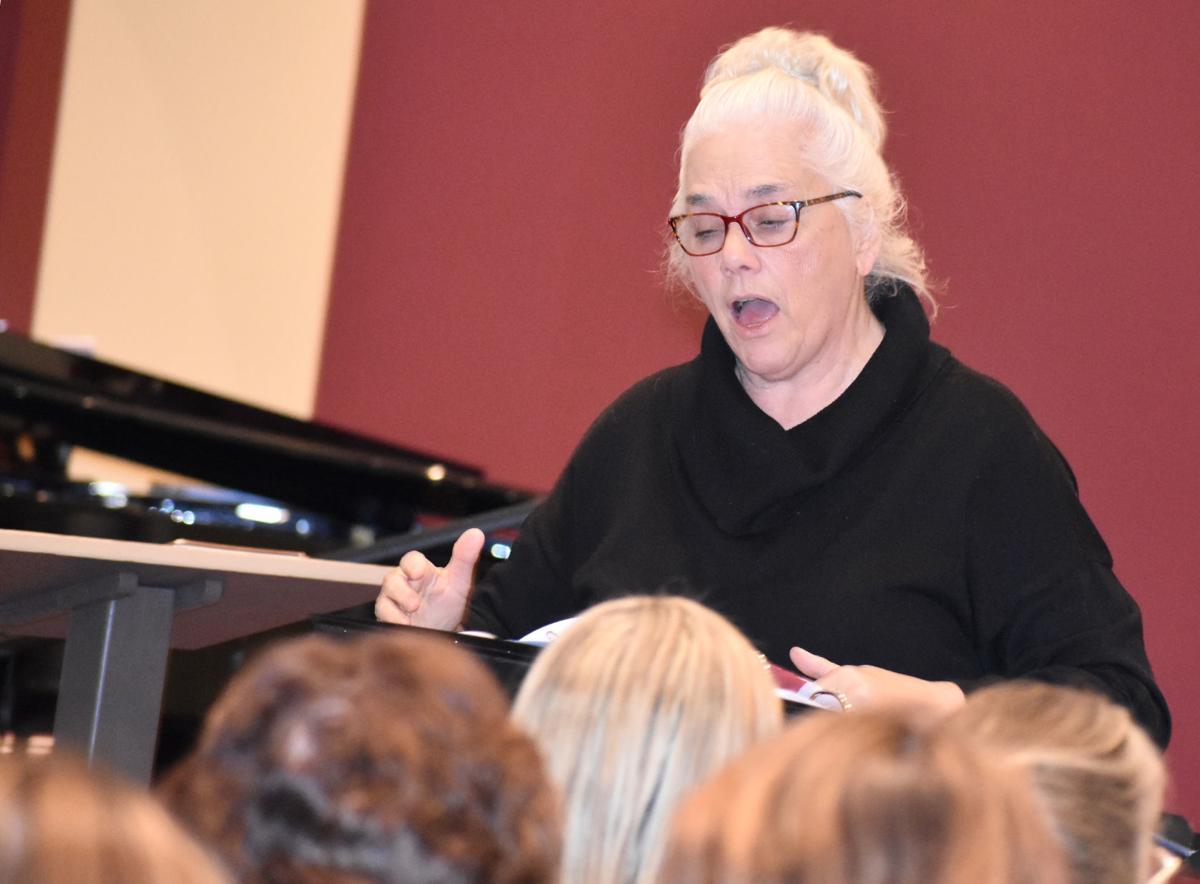 Beau Chant director Dione Peterson Belling likes to accomplish as much as possible during Monday evening rehearsals, but that doesn’t mean there isn’t time for fun. (Misty Schwab/Faribault Daily News)

Beau Chant members are in their early 20s, early 80s, and any age in between. The group of about 55 members rehearses at Bethel Ridge Church each Monday evening. (Misty Schwab/Faribault Daily News)

Bethel Ridge Church in Faribault is a quiet place on Monday evenings, but when a group of over 50 individuals enter the scene, melodic vocals with piano accompaniment create a sense of community in this secluded space.

Near the church altar is director Dione Peterson Belling, who started the community choir almost seven years ago. With a nod to town founder Alexander Faribault’s heritage, Peterson Belling chose a French name for the choir, Beau Chant. In English, the name translates to “Beautiful Singing.”

Currently preparing for back-to-back Christmas concerts Dec. 14 and 15, Peterson Belling is already thinking ahead to next year, constantly researching music according to the group’s skill level.

“Just as important, I believe, is our audience,” said Peterson Belling. “I think it’s very important to design the program to fit the interest and needs of the community.”

Years before starting Beau Chant, Peterson Belling taught choir to junior high and high school students in Sioux Falls, South Dakota. After 20 years in the classroom, she became the fine arts coordinator for 25 elementary schools, five middle schools and three high schools across her assigned region. Following the death of her first husband, she retired in 2000. That same year, she moved to Faribault to live closer to family.

Since moving to Faribault, Peterson Belling found her way back to music through her work with the Northfield Youth Choir and St. Olaf College. She also accepted a music position at Shattuck-St. Mary’s, where she shared her skills with students for nine years.

While taking time off from teaching, Peterson Belling missed music. As a result, she started Beau Chant and began recruiting members in 2013. Since then, the group has grown to 55 members from not only Faribault, but also Northfield, Owatonna, Kenyon, Cannon Falls, and even the Twin Cities.

“Initially I made contacts with former students who were singers,” said Peterson Belling. “From there, I looked at who taught vocals in the area and indicated an interest.”

Some members became interested in joining Beau Chant after learning about the travel opportunities that came with membership. In its first year of existence, Beau Chant was invited to perform at the Lincoln Center for the Performing Arts in New York City. The group performed in Washington, D.C., during an extensive summer tour and also sang internationally in Italy and France. Currently, Peterson Belling is planning a summer 2020 New York trip for Beau Chant.

Rachel Hallanger, a former Sioux Falls student of Peterson Belling’s, is one Beau Chant member who commutes from St. Paul each Monday to join the choir rehearsals. She even recruited her husband, and they both have enjoyed opportunities to sing in Washington, D.C., and Europe.

“[Dione] left a lasting legacy in the Sioux Falls Public Schools by building an extraordinary choral program, and she has continued to influence and guide singers, composers and conductors at all levels of the choral world,” said Hallanger. “Because of her influence, I continued singing in college and have a lifelong love of choral music. I was thrilled to join Beau Chant when she started the choir because I desperately missed singing in a choir and knew that she would put together a choir and choir experience that was outstanding and fun.”

“When I sang in my last college choir concert, I thought it would never get any better. Beau Chant is the choir that proved me wrong,” said Ostermeier. “I quickly realized how talented this director and choir were at first sight. The group challenges me to be the best singer that I can be. The repertoire is challenging, and as many of us are getting to that point where the voice doesn’t always work as you want it to, I am grateful to be a part of such a fine ensemble.”

The more, the merrier

The first performance is 7:30 p.m. Saturday, Dec. 14 at the Newhall Auditorium at Shattuck-St. Mary School’s. The following day, the choir performs in another concert at 3 p.m. at the Cathedral of Our Merciful Saviour.

As a “little twist” for these concerts, Peterson Belling invited Dan Illian, a former student of hers who currently works as a performer and voice-over actor in New York City, to narrate the concert. She also invited Zoie Reams, a former Shattuck-St. Mary’s student, now a professional opera singer, to perform a solo in three of Beau Chant’s pieces and host a couple workshop sessions with Shattuck students.

Not wanting to exclude anyone, Peterson Belling decided to invite even more former students. So far, about 30 of her former students have agreed to join Beau Chant during its December concerts. These past students will travel from Sioux Falls; the Twin Cities; Milwaukee, Wisconsin; Chicago, Illinois and even Virginia to sing with their former teacher’s choir.

Many past students of Peterson Belling’s have achieved success in the music department, some of them as composers. She’s supported the work of former students like Deanna Wehrspann, Christopher Aspaas and Kyle Pederson by purchasing some of their music pieces to perform, with support from community donations. Local businesses, including banks and funeral homes, have sponsored the songs Beau Chant performs at its Christmas and spring concerts throughout the years.

Even off the stage, Peterson Belling said she keeps in touch with many past students via Facebook. In fact, since the majority of her social media friends are former students, she created a private group for these individuals. The group has become a space where members not only share their accomplishments but also seek support during hard times.

In many ways, Beau Chant presents the same opportunities.

“It’s about more than making music,” said Peterson Belling. “Some really good friendships and ties have developed over the years.”

SOMETHING TO SING ABOUT

Tickets for the Christmas performance “Tis the Season” are available by emailing beauthantmn@gmail.com or through a Beau Chant member. All tickets are $12 for general seating. Those who donate $100 to the choir will receive two reserved seat tickets at the venue of their choice.

Businesses, individuals or organizations may choose to sponsor a concert song for $200. This supports the choir’s purchase of a specific piece of printed music for the performance.