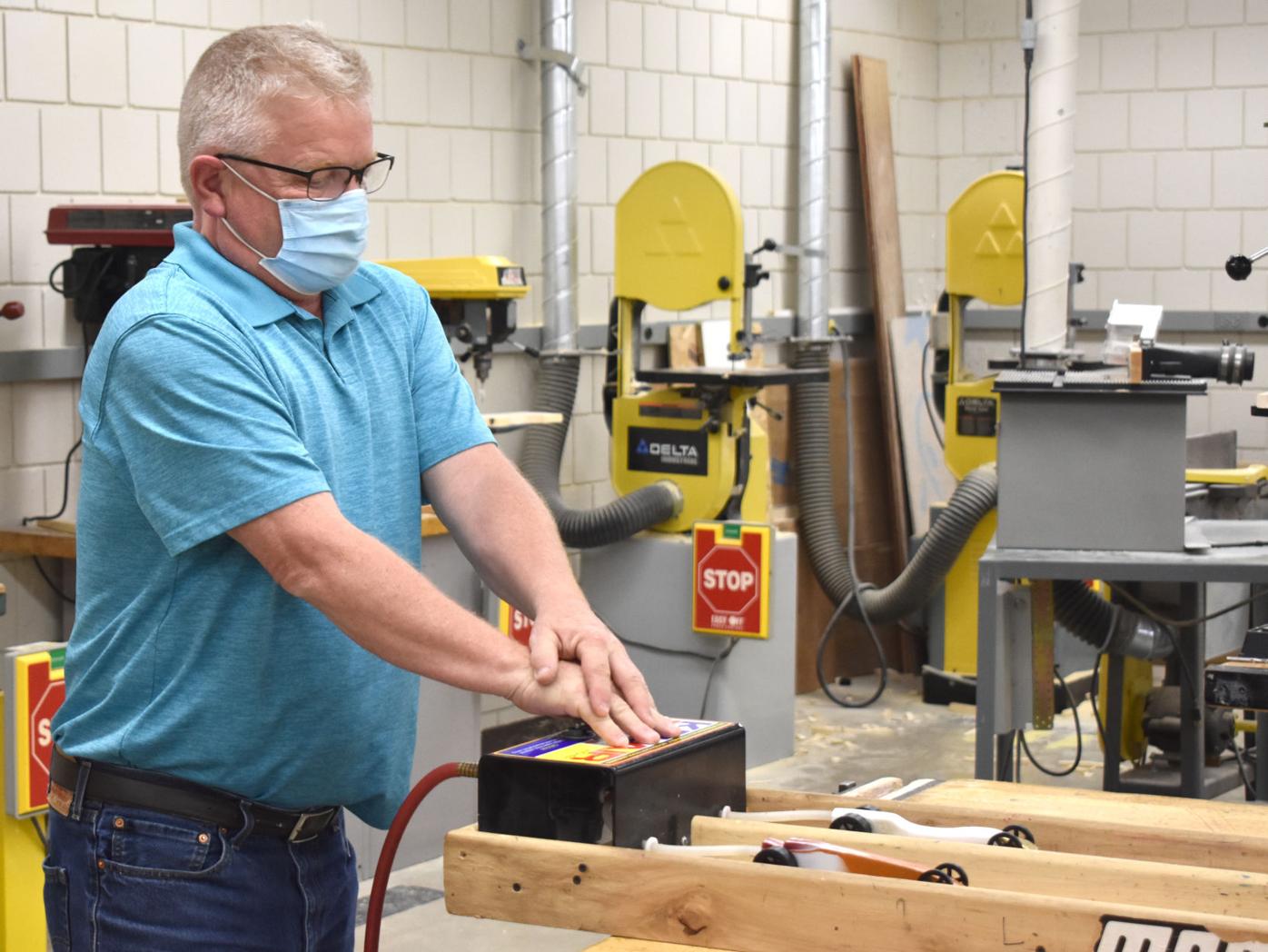 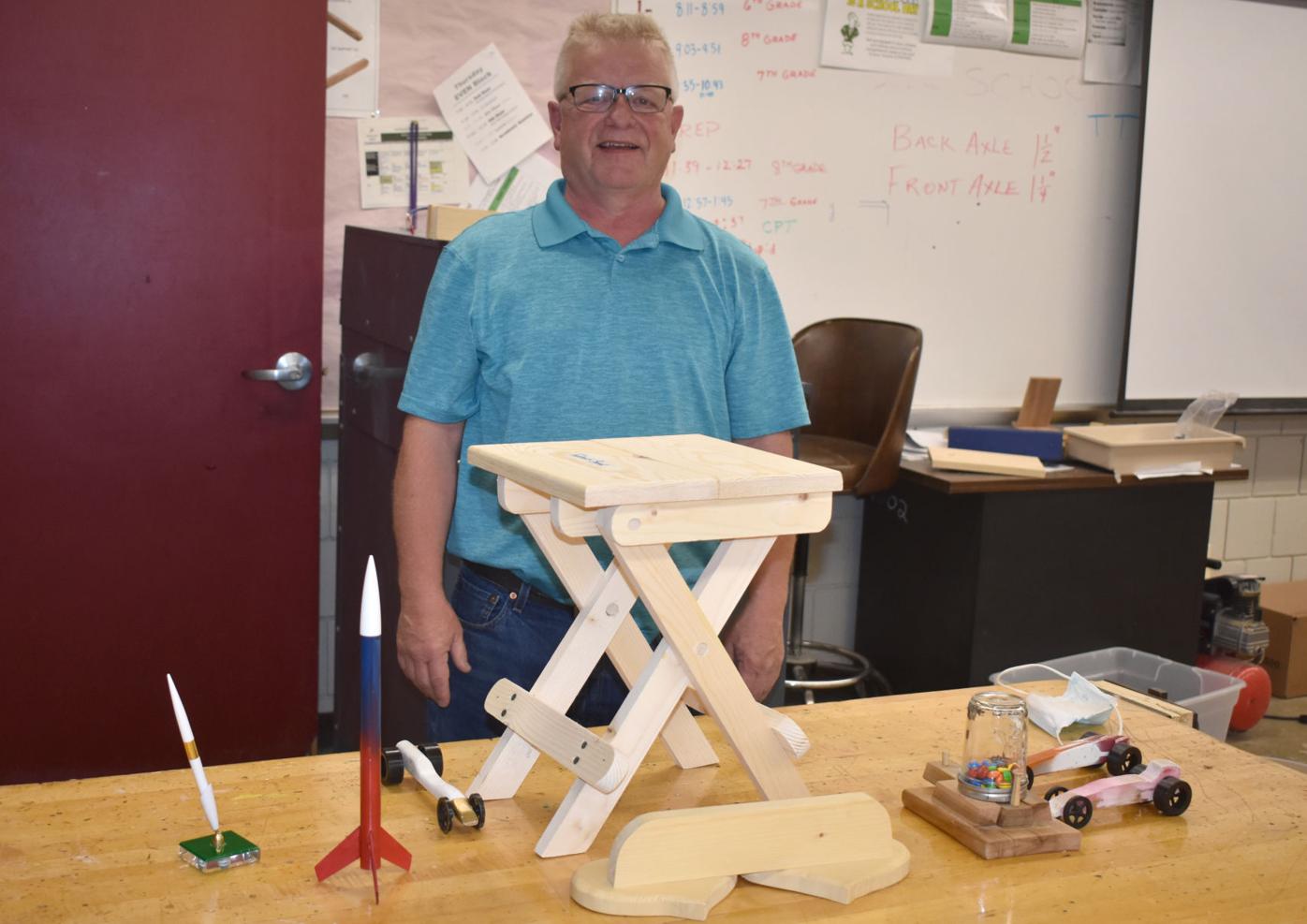 Former Faribault Middle School students would likely recognize some of these pieces industrial technology teacher Tim Bestul has taught his students how to build for years. They include a pen stand, a rocket launcher, a folding stool, a shelf, a candy dispenser and dragsters. Bestul retires this month after 31 years at the middle school. (Misty Schwab/southernminn.com)

Former Faribault Middle School students would likely recognize some of these pieces industrial technology teacher Tim Bestul has taught his students how to build for years. They include a pen stand, a rocket launcher, a folding stool, a shelf, a candy dispenser and dragsters. Bestul retires this month after 31 years at the middle school. (Misty Schwab/southernminn.com)

Anyone who took Tim Bestul’s industrial technology courses at Faribault Middle School might remember building a candy dispenser, a pen stand, a folding stool and dragsters to race on a track in his classroom.

The fourth son in a family of five boys, Bestul grew up in Winona and graduated from Winona State College with a degree in industrial technology. Following in the footsteps of two of his older brothers, Bestul became an industrial technology teacher. After just two years in the field, Bestul said he knew his career would take him to retirement.

That time in Bestul’s life comes to a close this school year as he prepares to retire at the very school where he first began teaching 31 years ago, in the 1990-91 academic year.

“The most interesting thing was the kids and just being able to teach them lifelong skills with woodworking,” Bestul said. “I think the challenges middle school kids present is also what kept me going.”

Because many of Bestul’s students entered his classroom without previous building experience, he needed to fill in the gaps. Until a few years ago, industrial technology was a required course at Faribault Middle School. But since switching over to what’s now called Gateway technologies, Bestul said most students who sign up for the elective class have already learned basic skills beforehand.

Each of Bestul’s current courses serve as introductory classes for three different grade levels in the middle school. The skills they learn in each Gateway to Technology course prepares them for the following course, working as a progression, he explained.

What distinguishes Bestul’s former industrial technology courses with Gateway technologies is the degree in which students use computers. His classes were more hands-on until 12 years ago, when students began using computers to design their projects. Gateway leads middle school students into Project Lead the Way in high school, which prepares them for college and allows them to earn college credits.

When he first started teaching at the middle school, which was formerly a junior high school, Bestul also taught ninth grade woods, a graphic arts class and a photography class.

Bestul’s two daughters, Claire and Anna, both attended Faribault Middle School and took their dad’s industrial technology courses. Now, Bestul said Claire is an extension educator for the state of Minnesota and made him a grandfather for the first time a few weeks ago.

During retirement, Bestul said he plans “just to enjoy my granddaughter right now.” He hopes to spend more time pheasant hunting and working on his own projects. Along with his wife, Janice, he enjoys refinishing furniture.

“I think I will be missing my coworkers and the students,” Bestul said. “Everybody brings a bit of a different challenge every day, so I guess that’s probably what I will miss the most.”

A group of Faribault Middle School teachers got together Tuesday to celebrate Bestul’s retirement. Some of them wore orange and camouflage outfits to honor him, since he is an avid hunter. Among those teachers was Amy Canfield, who said it has been a joy to work with Bestul.

“I jokingly said that he’s probably taught most of the town by now, to which he laughed and said, ‘Maybe so,’” Canfield said. “But it is true — there have been many student conferences where parents tell their children that Bestul was their teacher. That says a lot for a person’s commitment to a profession, a school, a town. He’s ‘salt-of-the-earth’ and will be missed at the middle school.”

Robotics teacher Matteo Barron said his time working with Bestul the past three and a half years has been wonderful.

“He has been an unofficial mentor for me in my own professional life and provides much needed support,” Barron said. “He is a highlight for many students throughout the school year, as they learn real life skills and enjoy all the projects they engage with. He will be greatly missed by students and staff alike.”

Every year for the past couple decades, Bestul has taught a few of the same projects to his industrial technology students.

In sixth grade, students learned to build a candy dispenser with wood and a mason jar. They also built mini dragsters and participated in racing day with a track in the back of the classroom, which Bestul built with a former teacher. This gets them excited about taking industrial arts again in seventh grade, he said.

Seventh graders traditionally crafted a rocket to launch outside and a pen holder as part of the plastic unit. The usual project for eighth-graders was a stool that folds up. This year, during the pandemic, students also built a floating shelf with wooden hearts as the backing.