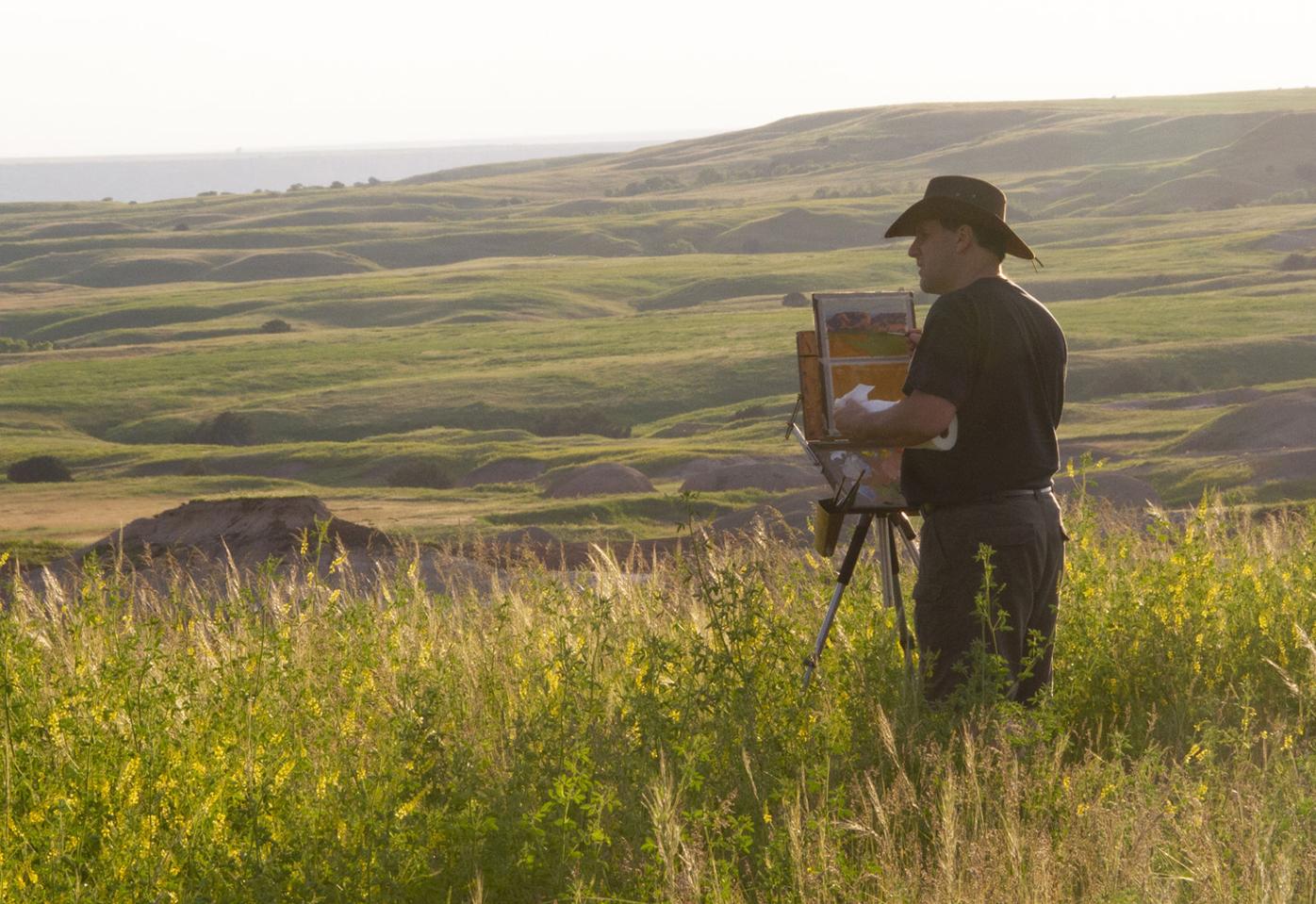 It only takes Jason Tako about an hour to paint a landscape oil painting, like this one in the Badlands of South Dakota. Tako is a 1990 graduate of Faribault High School who has now received national acclaim for his artwork. (Photo courtesy of Jason Tako) 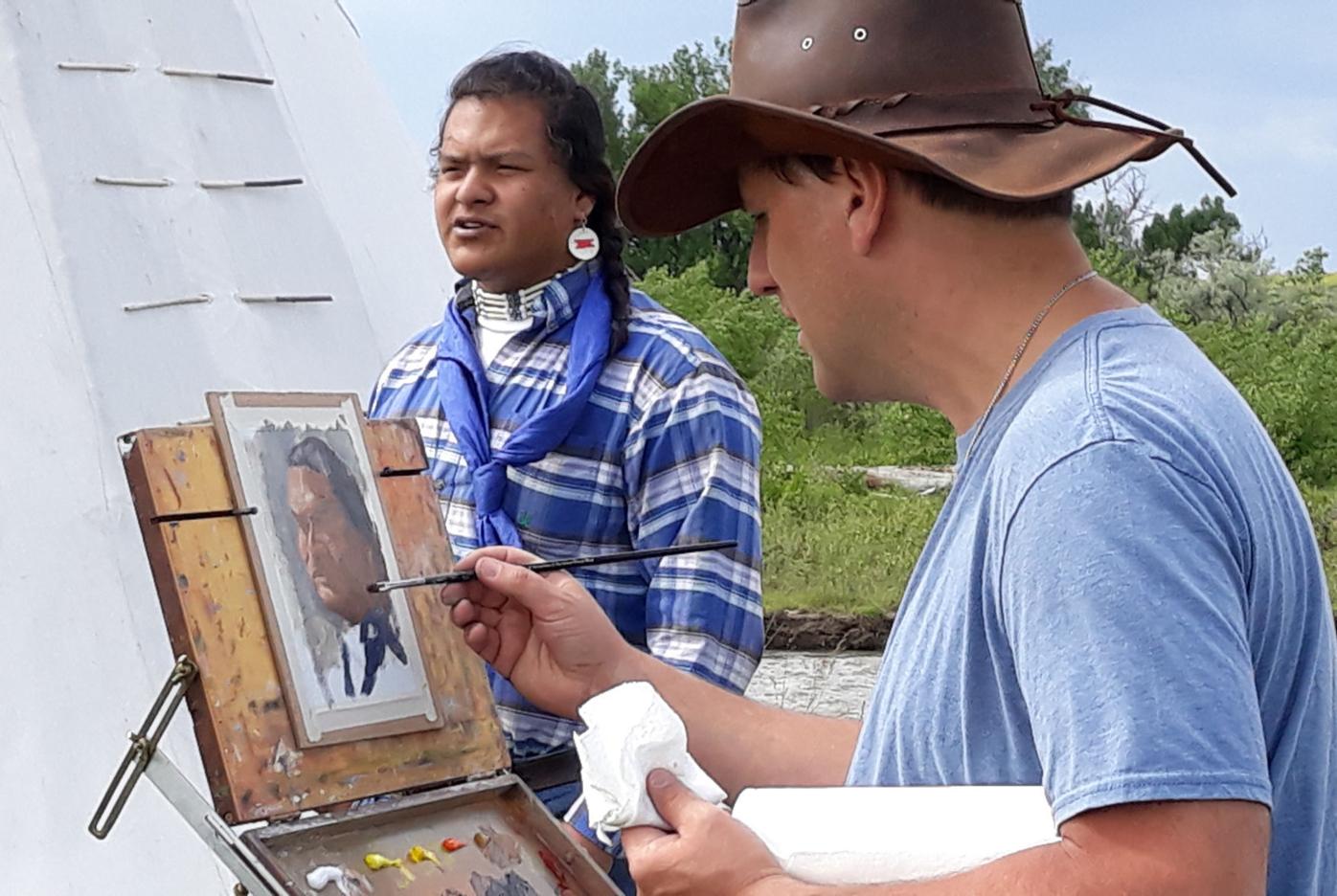 Artist Jason Tako has a particular interest in painting landscapes, wetlands and Native Americans. Pictured, a man of the Crow Indian Nation of the Crow Reservation in Montana poses for a portrait Tako painted after a Little Bighorn reenactment. (Photo courtesy of Jason Tako)

It only takes Jason Tako about an hour to paint a landscape oil painting, like this one in the Badlands of South Dakota. Tako is a 1990 graduate of Faribault High School who has now received national acclaim for his artwork. (Photo courtesy of Jason Tako)

Artist Jason Tako has a particular interest in painting landscapes, wetlands and Native Americans. Pictured, a man of the Crow Indian Nation of the Crow Reservation in Montana poses for a portrait Tako painted after a Little Bighorn reenactment. (Photo courtesy of Jason Tako)

When 1990 Faribault High School graduate Jason Tako looks at his sketchbooks from years ago, he thinks to himself, “It was an absolute miracle I kept going.”

Growing up in Faribault, Tako said he didn’t have much artistic guidance apart from former FHS art teacher Eugene Larson, who taught a wildlife painting course and summer classes. But Tako’s determination to continue learning, whether from his own practice or doing workshops, has led him to evolve in such a way that he’s earned national acclaim.

“As far as art, a lot of people have this misconception that it’s something natural, but that can’t be further from the truth,” Tako said. “To draw really well, I had to practice hard at it … What’s going to do it for someone more than anyone else, is the desire to do it and to just keep going.”

Known as a good artist throughout high school, Tako said he stopped drawing and painting “cold turkey” as a senior and instead picked up the bass guitar. He went to music school, became the honor graduate in his class, and played bass for 10 years. But that wasn’t the end of Tako’s painting days, as he stumbled back into artwork by sketching and painting from life. Faribault in particular gave Tako plenty of opportunities for landscape painting.

“One of my favorite spots, of course, was the River Bend Nature Center,” Tako said. “I would go there almost on a daily basis in the very late ‘90s and 2000s; you could see me painting and drawing. I would go to the center and sketch and walk around.”

During that same era, Tako worked as a graphic designer in the ad department of the Faribault Daily News. He worked there for less than a year, but it was enough time to become more accustomed to wetland painting thanks to a co-worker’s invitation.

Marti Walsh of Faribault worked in the classified section, and knowing Tako enjoyed painting woodlands and birds, she allowed him to paint on her wetlands. That became Tako’s haven for perfecting his oil painting skills. Even when Walsh’s golden retrievers distracted Tako from his work, Walsh remembers him returning with a sketch drawing of her pooches.

Tako himself said he didn’t remember that day but doesn’t doubt that it happened because Walsh’s three dogs often followed him out to the wetlands.

“Sometimes she had a little rowboat, and I would go out at times,” Tako recalled. “For an artist who does wildlife, just being out there is almost as important as the painting. You’re not just strictly working from photographs.”

Tako moved from Faribault to Pennsylvania about 18 years ago, after meeting his wife, Becky. The move took some adjusting, he said, because Pennsylvania lacks the wetlands and overall landscape variety he once captured in Minnesota. But if there’s one artistic subject Pennsylvania has that Minnesota doesn’t, Tako said. It’s the old barns that were built in the 1700s and 1800s.

Since moving to Pennsylvania, Tako has also leaned more heavily into his interest in Native American culture, which he’s captured through portraits.

He’s also applied a method called western impressionism, a term he isn’t sure if he coined or not, to his Native American paintings. Instead of painting realistically, he uses a cold wax medium used with mineral spirits to create a thick texture. He then paints on a cradled wood panel, which is a piece of wood with thick edges that keep the paint contained, and finishes the product with furniture wax. Instead of using brushes, he typically uses squeegees and rollers.

“My gallery in Missoula [Montana] has been selling those really well,” Tako said. “People on social media say it’s really selling well. It’s not something I aim for, but the public keeps liking it.”

While many artists ask how Tako does his technique, he said, “I’m not telling anybody.”

Tako also teaches art classes, which started in person but have shifted to Zoom since the pandemic. All over the country, artists “meet” online at 1 p.m. Eastern Standard Time on Saturdays for two hours of painting. For his YouTube channel, Tako records himself plein air painting, or painting from life on location, from start to finish without a time lapse.

“I can get these paintings done in about an hour to an hour and a half,” Tako said. “I just demonstrate and talk about what I’m doing.”

The pinnacle of Tako’s career happened early in 2020, just before the pandemic onset. He was named the featured artist at the Southeastern Wildlife Expo, which he called “the most prestigious worldwide.”

“That was really something,” Tako said of the honor. “I remember when they called me and asked if I wanted to be the featured artist, I couldn’t believe it for a few days. I was on TV and on billboards.”

The featured artist for the Southeastern Wildlife Expo is invited to do a large feature painting to use in all the expo’s advertisements, t-shirts, posters and other merchandise.

Tako completed a 36-by-48-inch painting of bighorn sheep with a North Dakota backdrop — a subject that hadn’t been done before. He titled the painting, “The Road Less Traveled.”

“I had to do a bunch of other paintings for the show,” Tako said. “I was painting like crazy that year.”

At the celebration in Charleston, South Carolina, “The Road Less Traveled” was auctioned off for $20,000. Actor Bill Murray was one of the guests, but Tako said the comedian was more interested in purchasing modern art than realistic paintings like Tako’s.

COVID-19 was tough for Tako and other artists who had to rely on online sales. Luckily, none of the galleries that display his work shut down. His art can be found in galleries in Montana, Wyoming, New Jersey, Pennsylvania, Massachusetts and Ohio. Although the Southeastern Wildlife Expo was cancelled in 2021, he will be automatically involved in future shows.

Tako still makes his way back to Faribault from time to time to visit family, including his mom, Judy Anderson, and stepdad, Gene Hartman. His brother and sister also live in Minnesota, along with friends and members of the Catholic community he knew years ago.

“My biological father died when I was about 5, and he was apparently good at art,” Tako said. “He made a lot of furniture and things like that. His mom, my late grandmother, would do a lot of painting too. She did some nice paintings, for someone who treated it as a hobby.”

Tako’s musical abilities come from his mom’s side of the family, where his uncle is the keyboardist for the Minneapolis funk band Ipso Facto, and his great grandma was a country singer.

Becky, Tako’s wife, is also artistically talented. He said her first paintings were better than his first paintings, and if she picked it up again after their children grow up, he said, “She would blow me out of the water.”

The Takos have two daughters and three sons, who show varying degrees of talent and interest in music, art, or both.

Jason Tako's artwork is available to view at jasontako.com. He has art videos and tutorials at mysketchjournal.com as well as the Jason Tako YouTube channel.