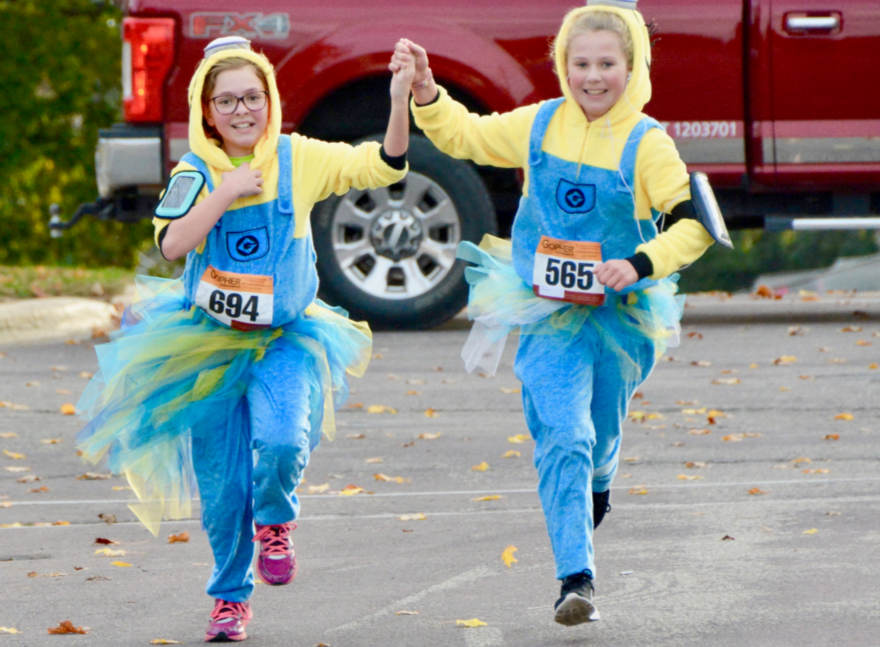 These two “Minions” participated in the Spooktacular walk/run for education at BA and Divine Mercy last year. This year’s Spootacular is Saturday. (Photo courtesy of Divine Mercy Catholic School) 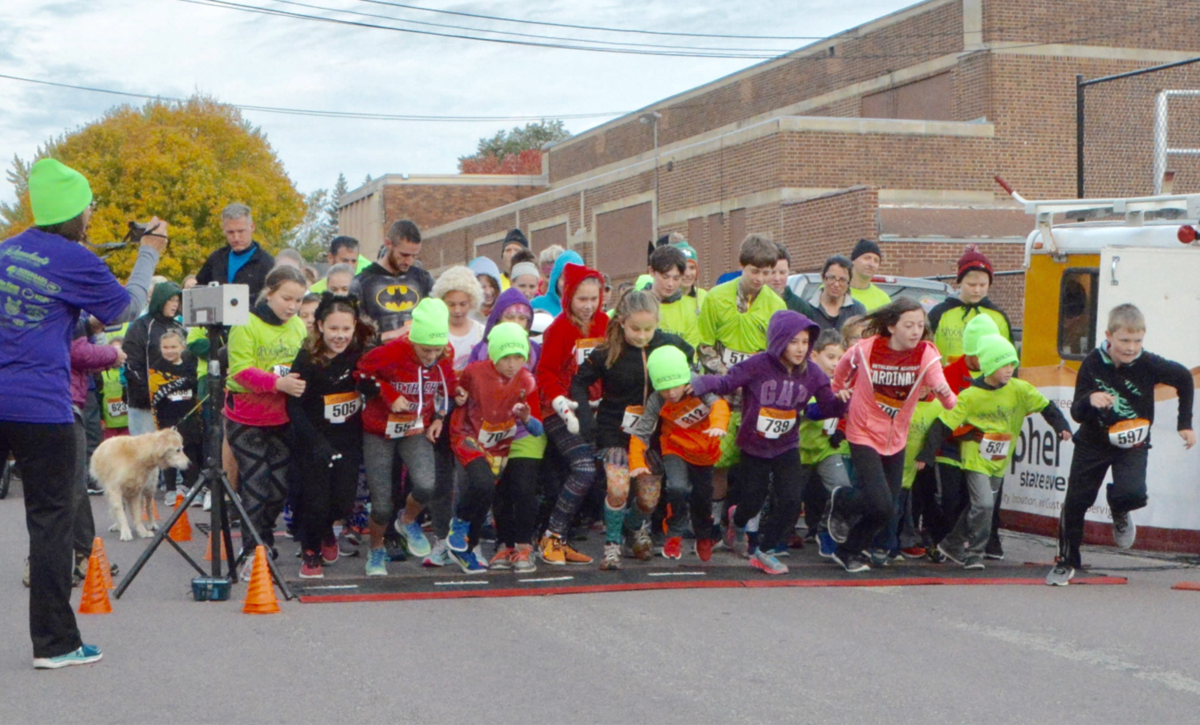 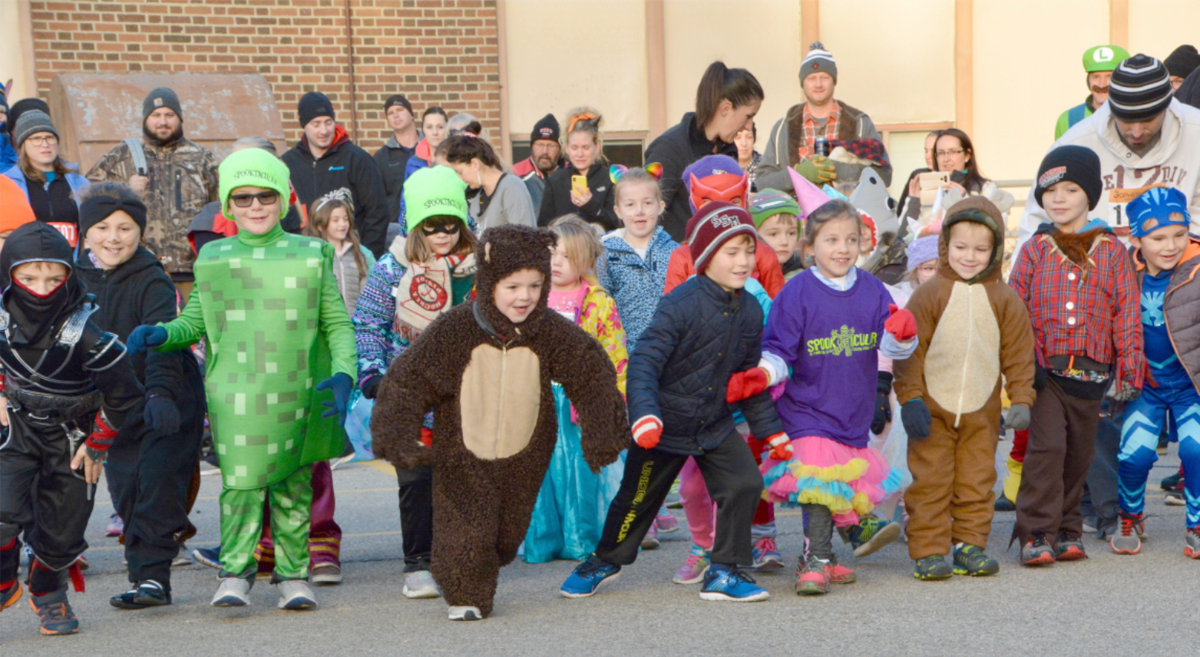 Children who participate in the Kids’ Dash outside Divine Mercy and BA often wear Halloween costumes as they complete laps around the BA parking lot. This year’s Spooktacular event is Saturday. (Photo courtesy of Divine Mercy Catholic School)

These two “Minions” participated in the Spooktacular walk/run for education at BA and Divine Mercy last year. This year’s Spootacular is Saturday. (Photo courtesy of Divine Mercy Catholic School)

Children who participate in the Kids’ Dash outside Divine Mercy and BA often wear Halloween costumes as they complete laps around the BA parking lot. This year’s Spooktacular event is Saturday. (Photo courtesy of Divine Mercy Catholic School)

October isn’t about running away from ghosts and goblins at Divine Mercy Catholic School and Bethlehem Academy — it’s about running in support of private education.

The schools’ annual Spooktacular, a family-oriented event, involves trick-or-treating, Halloween costumes, and a variety of fun and/or competitive races for different age levels. The races begin at 7:30 a.m. Saturday, Oct. 12 outside Divine Mercy and BA schools.

Ginger VanHecke, office manager for Divine Mercy Catholic School, coordinates the annual event with a committee of six individuals from the two schools.

“For many years, the first weekend in October was the marathon weekend for non-public education,” said VanHecke. “Instead of doing that walk, we decided to make it into a family run and be able to include everyone … It’s really our way of giving them an option for a healthy event the whole family can participate in.”

A parent suggested the committee find a way to engage dads this year at the Spooktacular. The result is a new free race called the Dads’ Dash. VanHecke said dads won’t know until they sign up the “twist” in store for those “brave enough” to register for this first race of its kind.

Following the Dads’ Dash, the Spooktacular returns to its regular lineup with the 8 a.m. Kids’ Dash, a lap around the BA parking lot for 3-year-olds or two laps for 4- to 5-year-olds. These preschoolers and kindergartners are encouraged to dress in costume as they complete their laps, stopping at candy stations along the way.

Avid runners who participate in the final two races, the 5K walk/run and 1-mile run, may choose to have their runs timed. The run begins outside Divine Mercy and BA and loops back via the Straight River Trail. Men and women under and over 21 may win first-place prizes in their respective categories.

Registration fees for each race, with the exception of the free Dads’ Dash, are weighted according to the length of each route.

Proceeds of the Spooktacular go to the general needs within the schools, such as extra equipment needed for Phy Ed, further enhancements to the STEM (Science, Technology, Engineering and Math) lab at Divine Mercy, and the robotics clubs at both sites.

Kris Sauer, director of enrollment and outreach at BA, said proceeds of the Spooktacular may contribute to things like technology advancements in the classroom or professional development opportunities for staff.

“Any funds we raise always go back to our students and benefit them in some capacity,” said Sauer.

Whether intending to support their schools or enjoy family time, VanHecke said the Spooktacular attracts a strong turnout from the BA and Divine Mercy community.

The Spooktacular run for education is 7:30 to 10:30 a.m. outside Divine Mercy Catholic School, 15 Third Ave. SW. The schedule of events is as follows:

Register for the Dads' Dash at spooktaculardadsdash.com and for all other races at spooktacularfaribault.com. Same-day registration will also be available at the event.