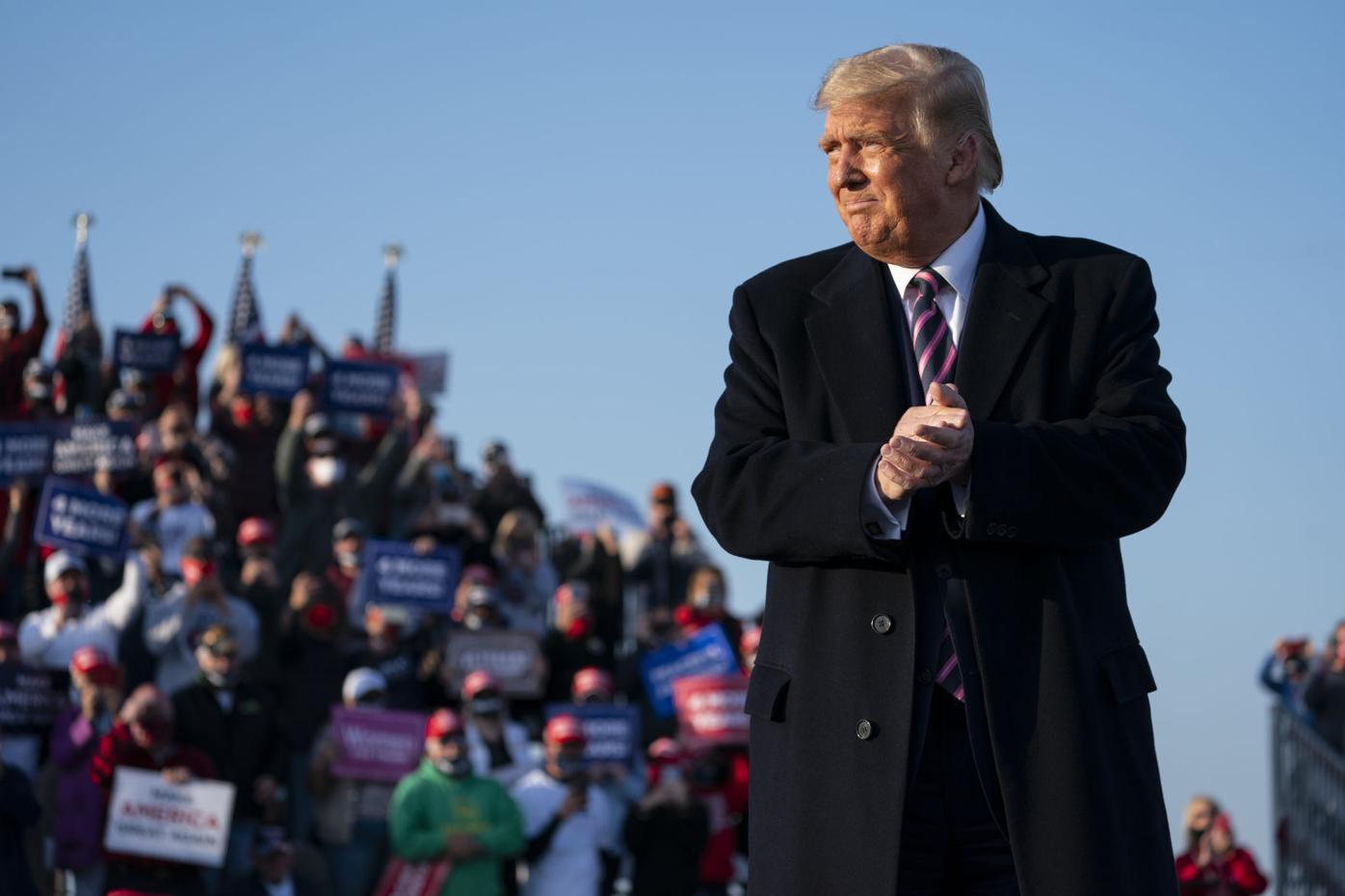 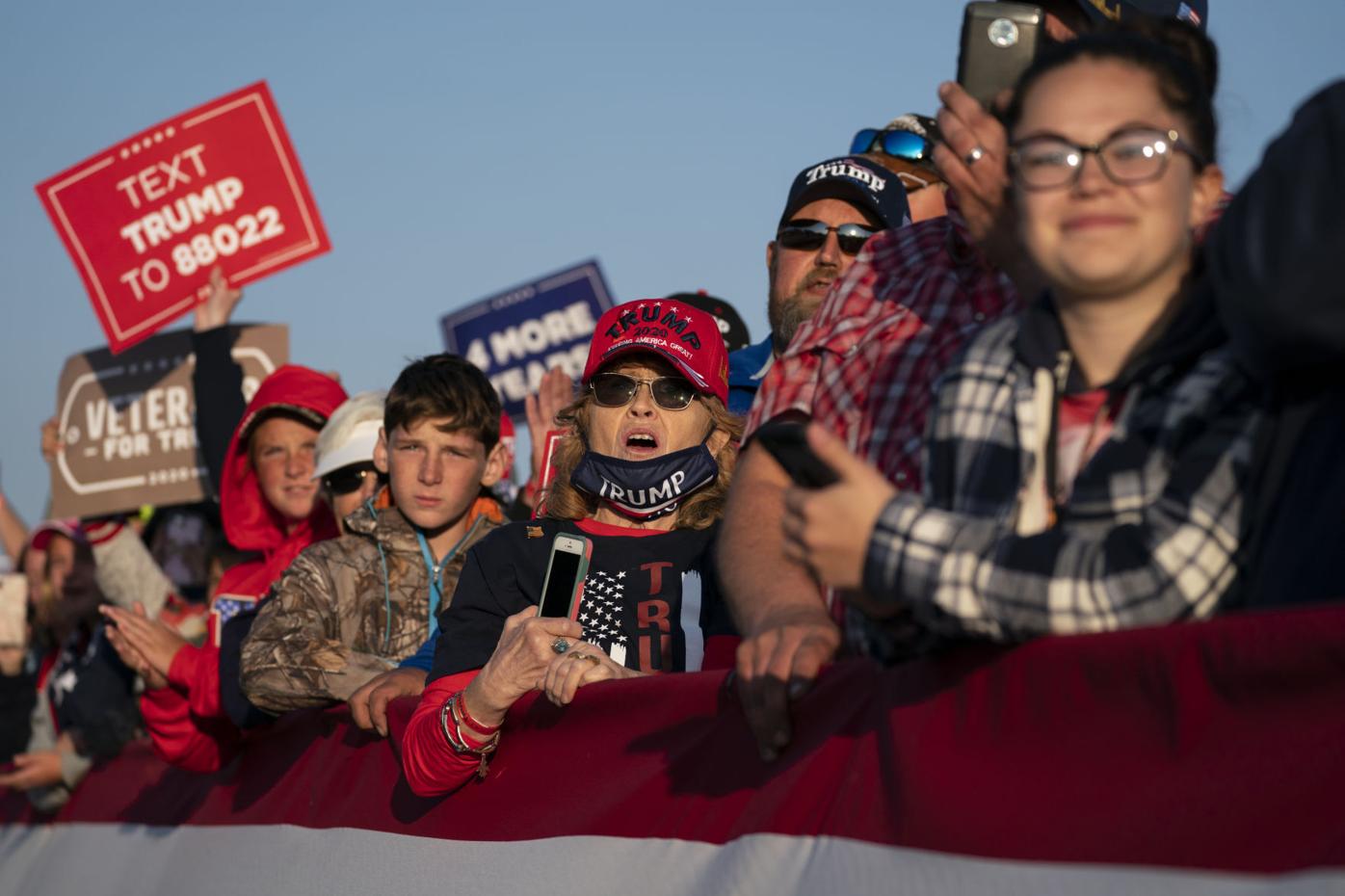 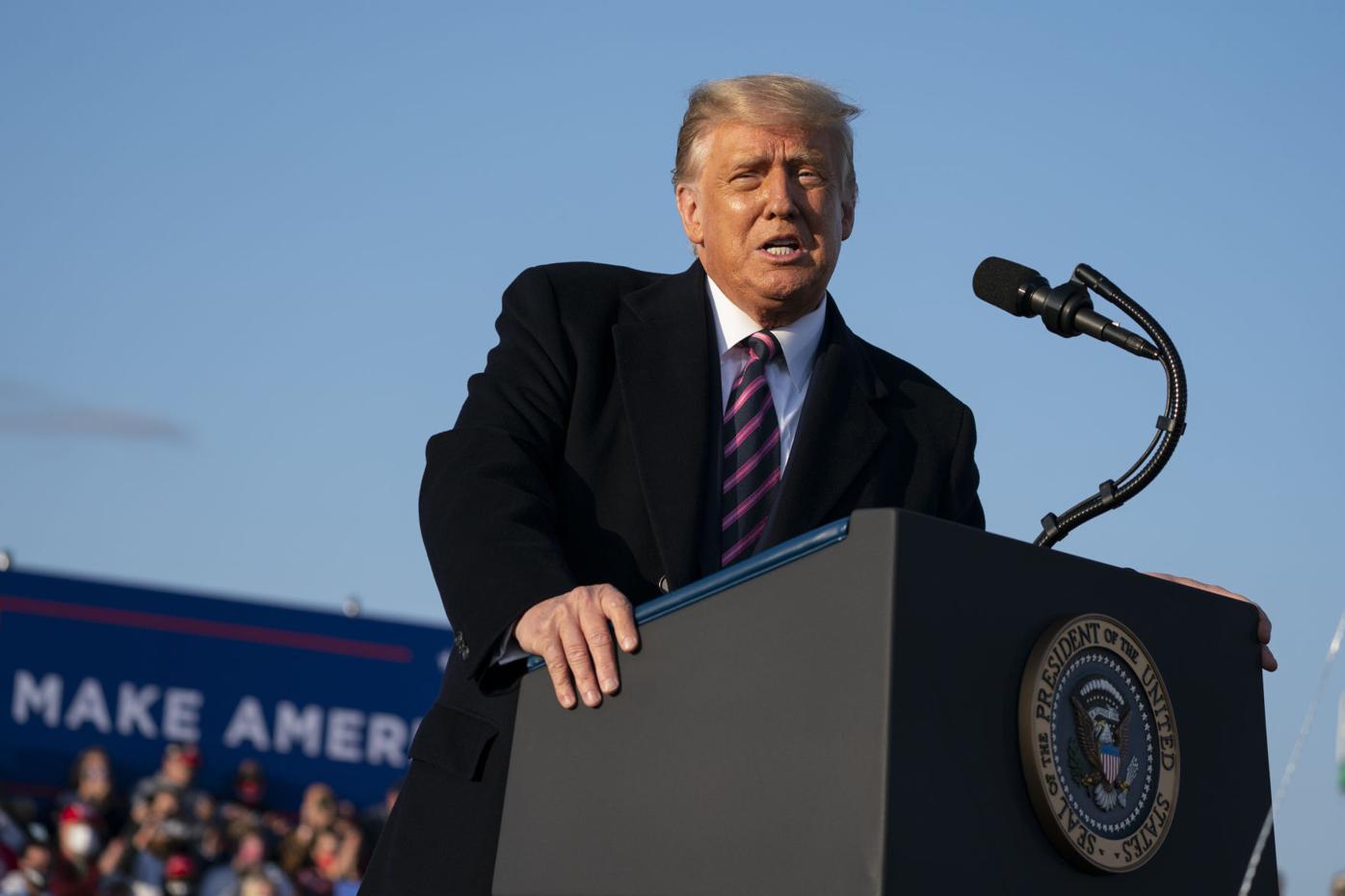 BEMIDJI — During President Trump’s rambling two hour speech in an airport hangar here in which he praised confederate general Robert E. Lee, bemoaned his own fate of having to make speeches in places like Bemidji, Minn., and played the usual favorites (“Lock her up!”), he also got around to the Supreme Court

A woman in the crowd tried to inform him that Ginsburg had died, “Ginsburg is dead!” Trump didn’t appear to hear her.

By Saturday, Trump made clear he would try to rush a nominee through the GOP-controlled Senate.

The Trump team seemed to think a Supreme Court fight might juice his floundering campaign, the New York Times reported Saturday, providing Republicans with the kind of enthusiasm that helped them in a few states after the fall 2018 nomination fight of Justice Brett Kavanaugh.

Although Senate Majority Leader Mitch McConnell, R-Ky., pledged to bring a nominee to the floor for a vote, it’s not yet clear if the Senate will act.

Trump mentioned during his speech that he recently added U.S. Sen. Ted Cruz to his list of 45 potential nominees, which he called “the smartest, the best, the crème de la crème.”

“They believe in the Constitution — little things like that,” he said. “I said I have to have somebody we are going to make sure is going to get approved. The only one I can think of is Ted,” he said of Cruz, his one time rival for the 2016 Republican nomination. During the campaign, he accused Cruz’s father of being involved in the Kennedy assassination and insulted Heidi Cruz’s physical appearance.

“He is going to get 50 Republican votes and 50 Democrat votes. They will do anything to get him out of the Senate, I joked when I said that to Ted,” apparently a joke about Cruz’s likability.

But before the news of Ginsburg’s death provided another cataclysm to an already tumultuous election year — including Trump’s impeachment and a pandemic — Trump filled 4,000 chairs here, plus portable bleachers, and then packed in people along the sides. The campaign summarily ignored the pandemic safety guidelines sent out this week by Gov. Tim Walz to both presidential campaigns.

The crowd was initially fired up, chanting “Four more years” and “USA” as Trump arrived and began his speech by complaining that you’re not allowed to go to political rallies or church in Minnesota, and are only allowed to “blow up stores.” So he called it a protest, as did many signs distributed at the door which said “This is a peaceful protest.”

Trump came closer to winning Minnesota than any Republican presidential candidate since Ronald Reagan in 1984, and he seems to think bashing refugees will get him over the top here. Within the first minute of his speech, Trump was blasting U.S. Rep. Ilhan Omar, a Somali refugee who recently breezed through a DFL primary on her way to a second term. The 5th Congressional District that she represents is roughly four hours from Bemidji, but the region’s hostility to refugees became clear when Beltrami County — of which Bemidji is the county seat — voted in January to not accept new refugees.

“Are you having a good time with your refugees?” he said. “Omar. That is a beauty. How the hell did she win the election?” he asked.

Then he warned that Biden has an “extreme plan” to flood the state with refugees from Somalia and other places around the planet.

He said Biden has promised a 700% increase in refugees from some of the most dangerous places in the world, including Yemen, Syria and Somalia. As part of his immigration reform plan, Biden has vowed to end what he calls Trump’s “vile Muslim ban” and increase the annual refugee admissions cap from Trump’s current 18,000 to 125,000, a nearly 600% increase and higher than President Obama’s final year in office.

The refugee program is for people fleeing war and persecution. America’s door was open wider than any other country’s before Trump took office. Now it’s nearly shut.

“Sleepy Joe will turn Minnesota into a refugee camp,” Trump said. He dropped Omar’s name about a half dozen times during the two-hour speech.

Then he rallied the crowd by celebrating the return of Big 10 football.

He complained about how Minneapolis officials handled the unrest after George Floyd’s death at the hands of police. He falsely took credit for sending in the National Guard to quell riots.

“The entire city was burning,” he said, falsely.

Then while criticizing protesters who toppled statues of everyone from Thomas Jefferson to Abraham Lincoln, he praised confederate general Robert E. Lee, saying he “won many battles in a row” which “shows that when you have leaders, when you have a great general, and Robert E. Lee would have won except for Gettysburg,” he said, almost mournfully.

As the clock ticked past one hour and approached two, some people began heading for the doors. Trump didn’t seem to notice, and rambled on, even seeming to inadvertently complain about his lot in life, saying he was only there because of the crummy job President Obama and Biden did.

“I had a very good life before,” he said. “I should be having a very beautiful life of luxury, and here I am at a hangar in Minnesota with 15 or 20 or 25,000 people and thousands of people that could not get in and I am working my ass off. I could be at home having a wonderful time.”

Just as he would seem to be winding down, he’d begin a new riff. The once-rowdy crowd had quieted down by the time the speech ended and Trump headed back to Air Force One.

Caleb Grant and Michael Ramirez, both 20, were two of the few undecided voters in the hangar. They began breaking down the 4,000 white chairs on the tarmac as part of their work for a local events company. Grant said after hearing some of Trump’s speech while picking up trash in the parking lot, he was thinking about voting for him.

“He knows what he’s doing,” he said. “He’s a businessman. He knows how to get people jobs. He does know money and how to make business happen. And that’s what this country needs right now. Everybody’s struggling,” Grant said.

Trump’s business career is more complicated than that. He inherited a massive amount of money from his father, a real estate tycoon, and then blew through millions. Companies he’s run have declared bankruptcy. But he managed to go on to host a blockbuster game show called “The Apprentice.”

Caleb Grant (left) and Michael Ramirez (right), helped set up 4,000 chairs for President Trump’s rally in Bemidji Friday night. Afterward, Grant said he was thinking about voting for Trump, while Ramirez said he did not plan to vote. Photo by Molly Korzenowski/Minnesota Reformer.

Ramirez said he’s not into politics, but his family is very pro-Trump. Seeing the president was “the coolest thing I’ve ever done,” he said.

“I’m not sure if I’m going to vote,” he said. “He’s an alright guy. It’s just, maybe some of the things he says — he doesn’t think ahead, but he’s got good plans for the future.”

In interviews, Trump has often struggled to articulate any plans or goals for a second term.

On the tarmac, Trump was told by a reporter about Ginsburg’s death as Elton John’s “Tiny Dancer” blasted out in the background.

Deena Winter is a freelance journalist who has covered state and local government in four states over the past three decades.