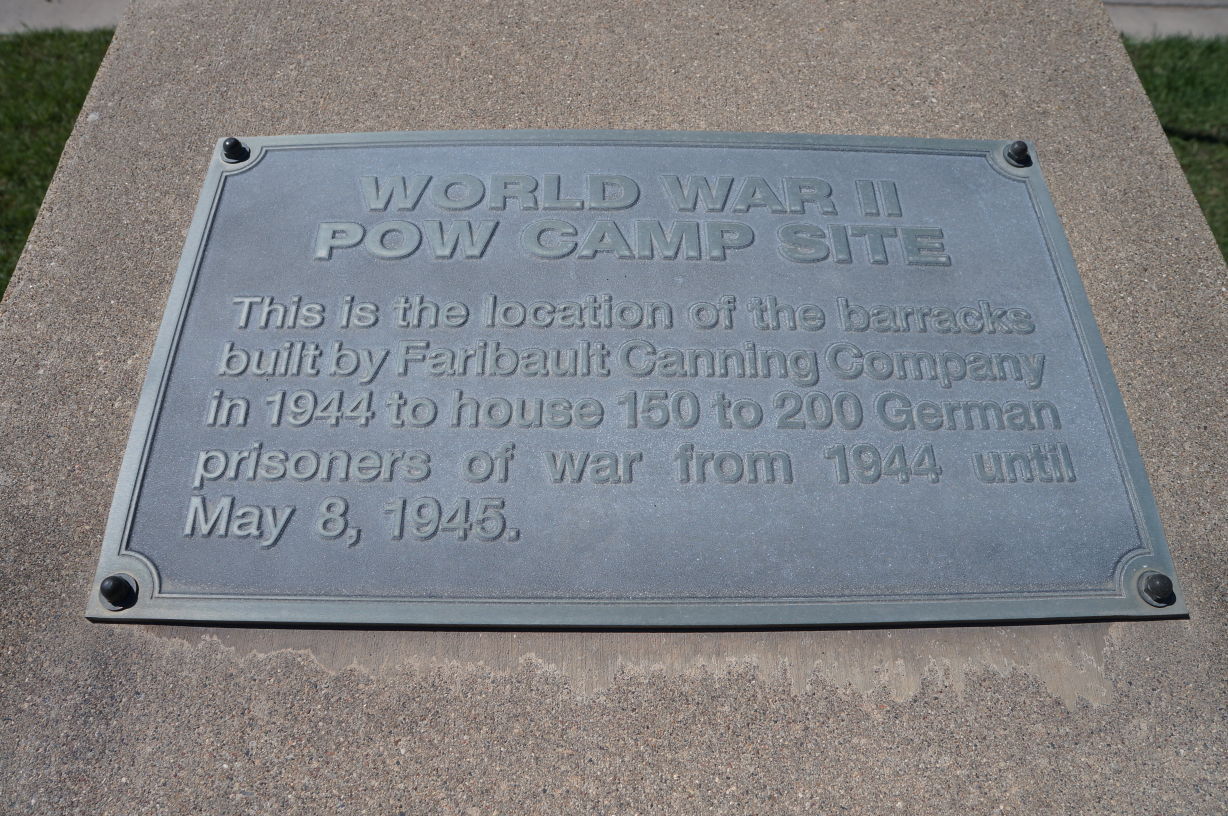 A plaque commemorates the location where the barracks once stood. (Brittney Neset/Daily News) 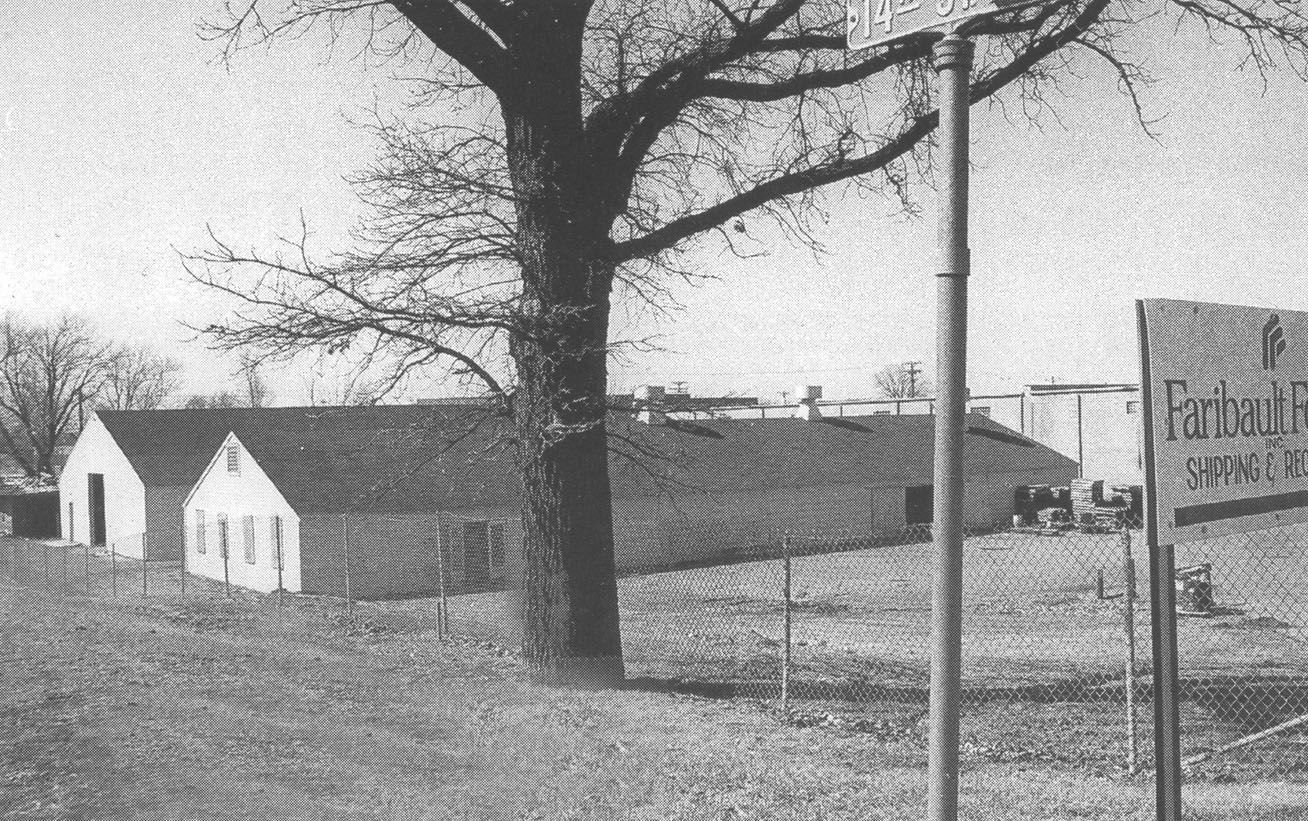 A plaque commemorates the location where the barracks once stood. (Brittney Neset/Daily News)

Since the nation’s hard working men were all away over seas, using prisoners-of-war was a popular solution to combat the vast labor shortage experienced during the second World War.

In January of 1944, the Minnesota Canning Association responded to a looming labor shortage due to World War II and requested a grand total of 3,000 prisoners-of-war to work within the state.

“Every state in the union, plus Alaska, had prisoner-of-war camps during this time,” said Jerry Ganfield in an interview for the Owatonna People’s Press.

In a time of crisis in the work force, considering that the other states were also participating in housing prisoners-of-war, it’s no shock that Minnesota, Iowa and North and South Dakota also followed suit. Owatonna and Montgomery are two other cities in southern Minnesota that also hosted POWs in their town. The main base camp, Camp Algona, was housed in Algona, Iowa, and supplied German POWs to Minnesota, Iowa, North Dakota and South Dakota.

In March of 1944, army officers surveyed the area and in April they suggested using the St. James Episcopal Boys School as the location to house the POWS.

There were some protests in regard to housing the prisoners-of-war when it first came to the city council in 1944. But the mayor at the time, Hillary Walsh, who served from 1944 to 1948, believed that they had no right to deny the POWs, said Anita Albrecht Buck in her book “Behind Barbed Wire.”

In an interview by the Daily News with Pauline Schreiber in April 1990, Ruth Thibodeau, a woman who worked at the cannery while the POWs were working, recalls being told to stay away from the POWS.

“From what I can remember, they were more like trustees than prisoners,” said Thibodeau. “They were supervised, but the guards didn’t have guns or anything like that. They [the POWs] had to stay in their designated area.”

Between 150 and 200 prisoners-of-war were housed in the barracks and worked with Faribault Canning company, according to Martin A. Paschke who was a supervisor of the canning company in 1944 when the POWS worked there. Thibodeau said that most of the POWs were between the ages of 20 and 25.

“They [the POWs] were the best workers we had because they liked it over here,” said Paschke in a 1990 interview with Schreiber for the Daily News.

While living in the barracks, the POWs were expected to work in the fields for the company and had little to do in terms of recreation. In the earlier months of summer, the POWs worked at pea vining while from August to September they spent their time snapping corn. In between seasons they could work with local farmers to harvest grains. All the labor they did while staying at the camps was paid.

Although the POWs didn’t have much to do with their free time, they were allowed a few simple items to keep entertained. According to “Behind Barbed Wire” by Buck, the POWs’ base, Camp Algona in Algona, Iowa, did not supply any recreational items to the men. With help from YMCA field representative Howard Hong (who was from Northfield), YMCA and the Red Cross, POWs were able to read general education texts and play musical instruments.

The prisoner-of-war camp didn’t last long after the war and the men who had inhabited it were shipped out soon after it ended. Many of the prisoners enjoyed their time spent in the barracks in Faribault so much that they did not want to leave, according to Schreiber and Paschke.

After World War II, the Faribault Canning Company used the four barracks to house other migrant workers who worked in area farms and with the company.

“Later in the late 50s and early 60s migrant workers stayed in these [the war barracks],” said Charlie Boucher in a Facebook post. “My dad drove truck and I’d ride along sometimes. The workers picked the ripe cobs of sweet corn by hand and threw them in the back of the truck.”

Because of the work supplied by the POWs, and later migrant workers, Faribault was allowed to flourish in a difficult time in history.

“Without prisoner help,” said a 1945 Annual Report of Rice County, “it is very likely that the canning company would not have been able to pack their peas or corn.”

Although the barracks supplied great housing for workers in the area, the war barracks were ultimately demolished on April 2, 1990. Faribault Foods demolished the four barracks, the former Bauernfeind and Goedtel Roofing firm and two residences. A plaque to commemorate them is located on-site near some of the newer buildings at Faribault Foods. In place of the barracks on the corner of Second Avenue Northwest and 14th Street, Faribault Foods built a 180,000-square-foot addition.

Brittney Neset is the editorial assistant at the Faribault Daily News. You can contact her at 507-333-3130 or @brittneyneset on Twitter.