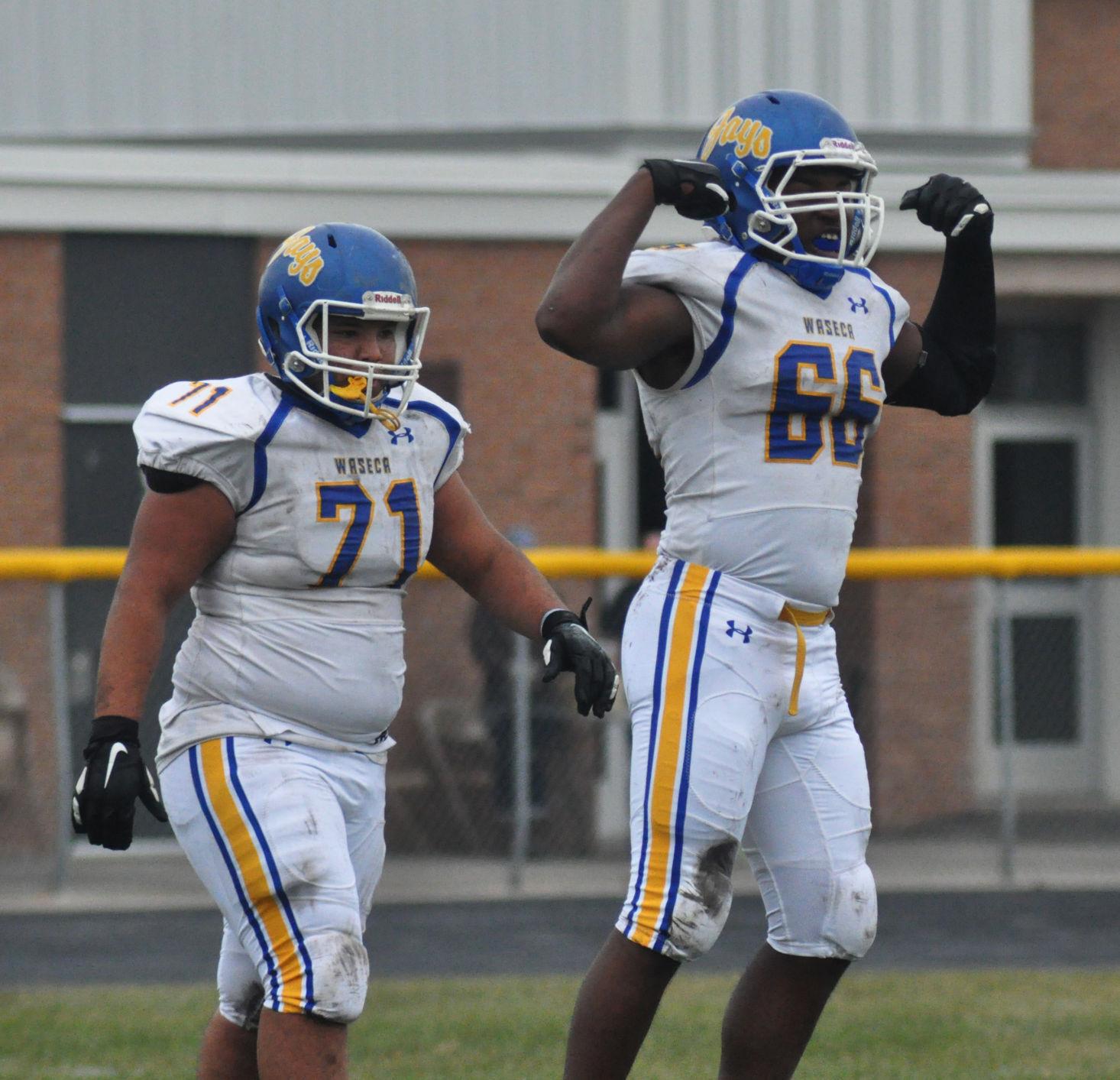 Marcus Hansen flexes at the end of the first half against the Hutchinson Tigers in 2018. The defensive end recorded 8 tackles and led the team with 2.5 sacks on the afternoon and closed out his high school career with a third straight section title this season. (File photo/southernminn.com) 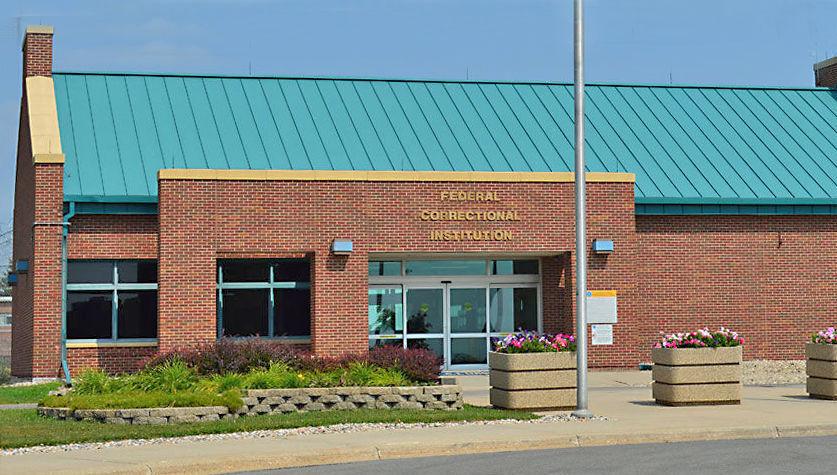 The Federal Correctional Institution — Waseca has seen a dramatic increase in COVID-19 cases since mid-August. A group of new inmates from Oklahoma was transferred to the prison at that time. (Federal Bureau of Prisons photo)

A drive-thru Nativity scene is coming to Waseca to raise the holiday spirits of area community members. Some of the actors, including live animals from Huber’s Hilltop farm, posed to show a preview of what is to come Dec. 18 and 19. (Bailey Grubish/Southernminn.com)

St. Paul Lutheran Church and St. John Lutheran Church is putting on a drive-thru Nativity scene at 5-8 p.m., Dec. 18 and 19. There will be six different scenes with actors and live farm animals. (Bailey Grubish/Southernminn.com)

People are encouraged to drive and there will be a radio station setup that people can tune their car radios to for Christmas music while going through the loop. It’s a drive thru, but for those walking, luminary bags will be set along a walking path to follow.

“Due to COVID-19, there’s a lot of people who aren’t able to celebrate Christmas in the traditional way and our church is trying to find a way to reach the community and surrounding communities,” St. Paul Lutheran member Anita Nelson said.

The Nativity is made up of six scenes that are spread between the two church parking lots. At the end, there will be a spot where people can donate canned food items that will go to the Waseca Area Food Shelf.

The drive thru starts with Mary talking to the angel and it continues to another scene of the angel visiting Joseph. As people continue driving, a scene of Mary and Joseph, accompanied by a live donkey, are talking to the innkeeper, then the Nativity scene with alpacas, donkeys and goats will be the final scene in the St. Paul Lutheran parking lot.

“Our main desire is to put out there the birth of a Christ child and that’s what it’s all about,” St. Paul Lutheran Pastor Larry Griffin said. “All the scenes point toward a baby in the manger.”

Continuing to St. John Lutheran parking lot, a scene of the angel talking to the shepherds in the field will start with live sheep before continuing to the three wise men speaking to King Herod.

Nelson said they’re collecting canned goods for donation because it seems like they should be reaching out to help people.

“We’re doing it visually and spiritually, we should have a way to do it physically too,” Nelson said.

The vision of the drive-thru Nativity began in October with a small group that has now grown to 79 volunteers helping put on this production for the community.

“We have a whole large crew of people that are working together to share the Christmas joy,” Nelson said.

Live animals were brought for the Nativity scenes by Huber’s Hilltop farm, owned by Terry and Amanda Huber, and the Roemhildt farm.

“It’s been a really good chance for volunteers to get involved and so many have been stepping up both at St. Paul Lutheran and St. John Lutheran and it’s so good to see volunteers engaged in painting and baking cookies,” Griffin said.

Each person attending the drive thru will receive an individually wrapped cookie that members of the churches baked.

Typically the churches hold a Christmas Bazaar, where members of the church make craft items and bake goods to sell to raise funds to go for missions, but that isn’t happening due to the COVID-19 pandemic. The drive thru nativity is a way to still spread the Christmas spirit.

“The enthusiasm is building as we go and it’s so fun to see it come from a small vision to fruition,” Nelson said. “It’s been a collaborative effort with a lot of people to make this happen and I hope that we have a great turnout.”

Waseca City Council sets Property Tax Levy increase at 3% at the Dec. 15 meeting. The council had no further discussion during this meeting. (County News file photo)

Councilors had no further comments on the tax levy at its Dec. 15 meeting. The council held its Truth and Taxation hearing on Dec. 1 and councilors have discussed proposals for the budget in the months leading up to the final vote.

Waseca City Manager Lee Mattson shared a brief description of the final tax levy before the council unanimously approved it. The city’s main goal is to maintain good governance as outlined in Vision 2030: present a balanced general fund budget for 2021, continue to change and adapt with operations in an effort to control expenses, levies and fees, continue to invest in aging infrastructure, maintain quality city service levels and maintain sound fiscal health.

Each $100 in property taxes Waseca residents pay equals: $59 for the general tax levy and abatement, $30 for the capital levy, $4 for the debt service and just under $2 for the water park debt.

The city administration plans to handle cuts in the 2021 budget by deferring capital spending, using staff attrition and employing selectively when there’s open positions, and reducing the use of independent contractors, which will require additional staff time and impact service delivery, Mattson said during the Dec. 1 meeting.

Property taxes are split into five categories: city at 44%, county with 31%, schools at 23%, Economic Development Authority at almost 1% and other agencies are given the remaining tax funds.

The Economic Development Authority’s property tax levy for 2021 of $93,990 was also approved at Dec. 15 meeting. 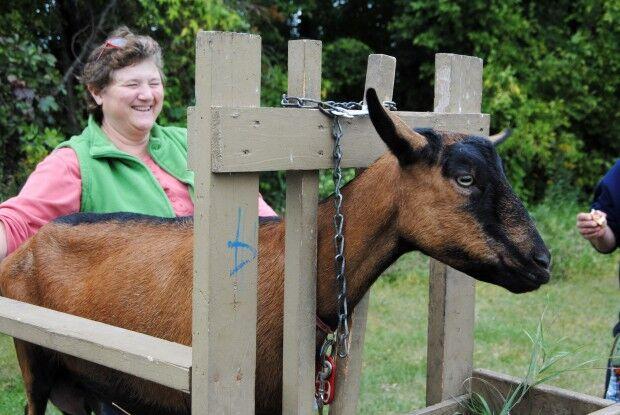 Kathy Zeman, of Simple Harvest Farm Organics in Nerstrand, is one of the organizers of a new three-year local food sustainability project in southern Minnesota. Zeman is the executive director of the Minnesota Farmers’ Markets Association. (File photo/southernminn.com)