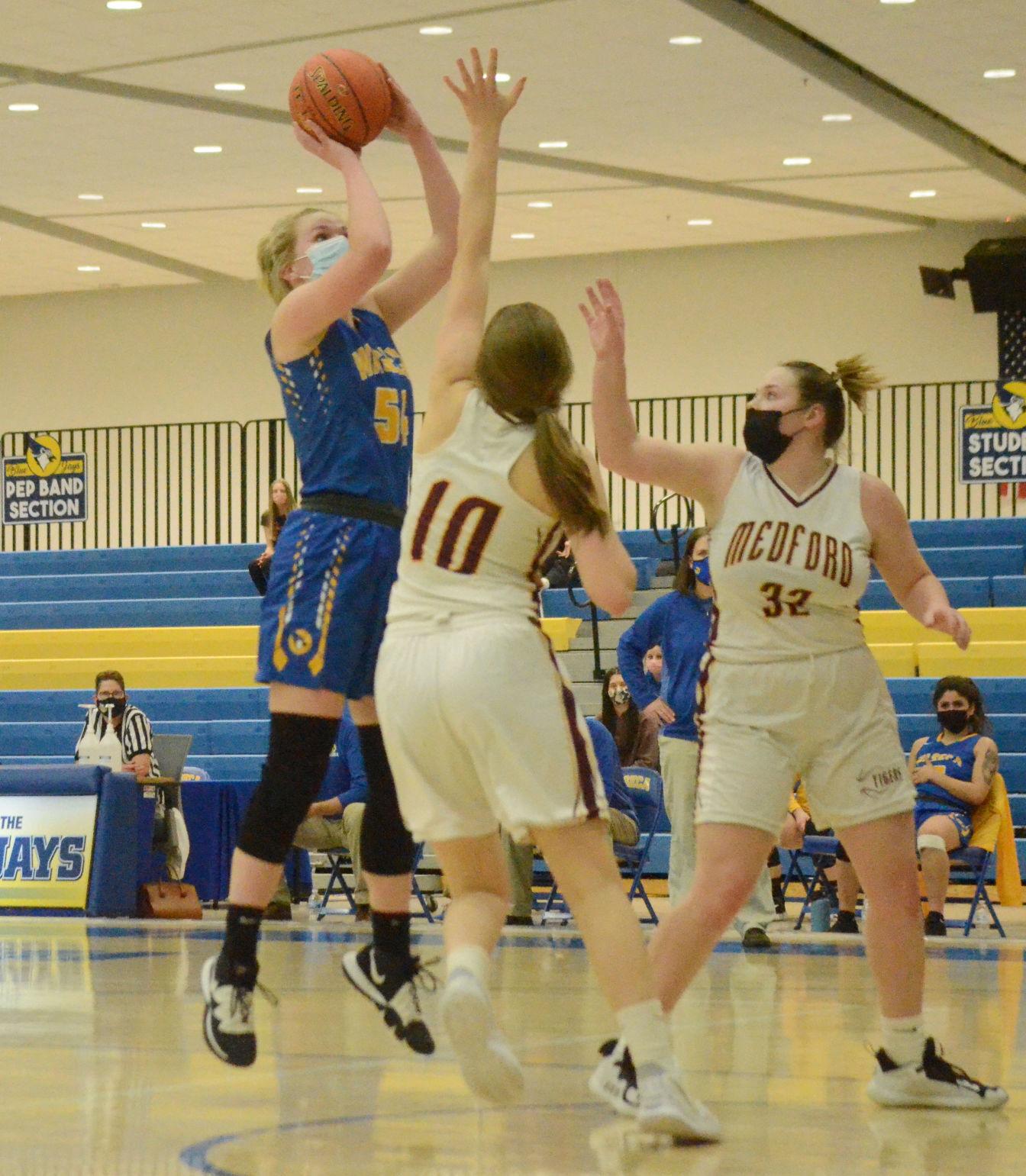 Waseca sophomore Kloe Wadd (54) rises up over defenders senior Isabella Steffen (10) and senior Lilly Roehrick (32) of Medford. Wadd had 11 points on the night and was a major force on the boards. (Lucas Seehafer/southernminn.com)

A Boat House Grill and Bar employee serves a customer while wearing a mask after it was allowed to reopen for dine-in at the beginning of January. Other bar and restaurants in Waseca County have also reopened with COVID-19 guidelines in place. (Bailey Grubish/Southernminn.com)

Customers are starting to return to the Boat House Grill and Bar after it was closed for more than month.

“I think people are tired of sitting around and just want to get out,” Boat House owner Del Olivas said.

The Boat House was among the Waseca County bars and restaurants who were closed by Gov. Tim Walz’s executive order in November amid the rising number of COVID-19 cases. Since the dining-in option began again in January, restaurants and bars have been following strict operating guidelines from the state. All servers are required to wear a face covering at all times and customers are allowed to take their face coverings off when eating or drinking. Bars and restaurants are capped at 50% capacity that can’t exceed 150 people and tables must be six feet apart. Reservations are recommended and a sign-in sheet helps with contact tracing. Bars and restaurants must close for dine-in service at 10 p.m., but can continue with take-out orders. 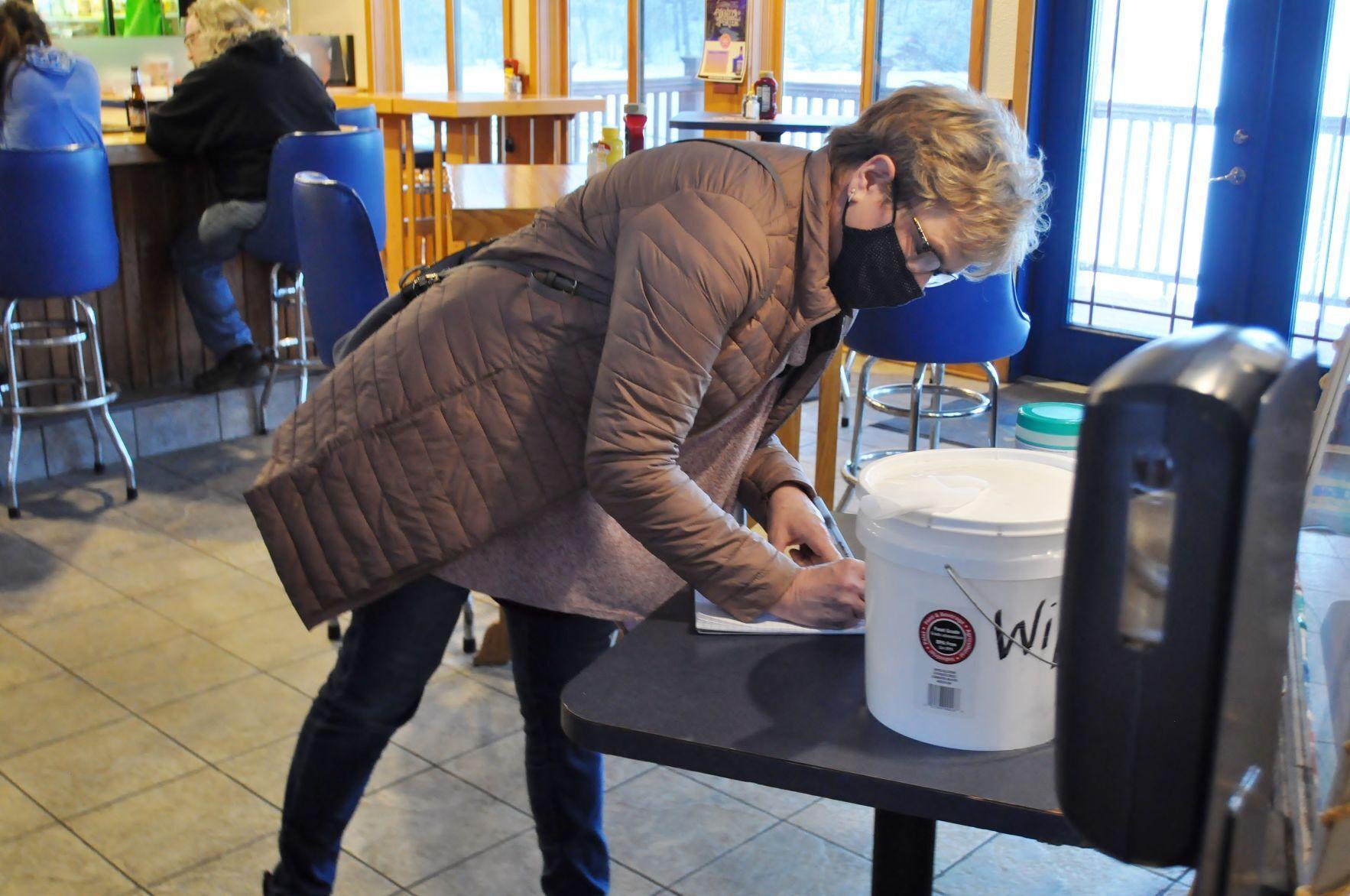 A Boat House customer signs the contact tracing sheet required by the COVID-19 guidelines. Bars and restaurants are excited to be open again for dine-in after months of being held to take out and delivery only. (Bailey Grubish/Southernminn.com)

For nearly a year, bars and restaurants have been resilient throughout shutdowns due to the COVID-19 pandemic. Surviving on take-out service alone is not ideal or possible for every bar or restaurant, though many received support from the local communities and from the state.

The most recent closure began Nov. 20 and Walz loosened the restrictions Dec. 18 to allow outdoor dining for all Minnesota bars and restaurants, but most businesses found this unrealistic due to the cold weather for which the state is known.

Waseca County’s restaurants and bars either closed their doors or only accepted takeout orders, but they were kept going by community support and government aid. But some are still waiting on the latest government support.

Businesses who were directly impacted by Walz’s closure in November should have received direct payments from the Minnesota Department of Revenue. However, many local establishments in Waseca County found out they didn’t qualify for the direct payment, said Ann Fitch, executive director of the Waseca Chamber of Commerce.

“I’ve been really surprised when the bars and restaurants said, ‘We didn’t get anything,’ so they’re going through the appeal process. The appeal process seems to be taking longer than we would all like for it to take so we’re calling on our elected officials to help move that along,” Fitch told the Waseca County commissioners in an update on Tuesday, Feb. 2.

Fitch noted that late sales tax payments can disqualify a business from the state’s direct payment, but it’s a pandemic and late payments are going to happen. That has been a “sticking point” for Chambers of Commerce around the state, Fitch said.

The direct payments of about $10,000-$15,000 are “pretty important” to the local businesses and there isn’t a bar or restaurant where there isn’t a need right now, Fitch said.

Additionally, Waseca County received money from the state separate from the direct payments to dole out to businesses and 38 businesses have applied for those grants, according to Fitch.

“Everyone’s been very appreciative of all the help that the county has given them. These last 10 months have been unbelievable,” she said.

The local service and hospitality industries have taken a hit during the pandemic, but they’re “starting to see some sun,” she said.

In the community, bars and restaurants felt the support through takeout and delivery orders as well as gift certificate purchases.

Olivas said the delivery and take-out orders have kept the Boat House busy and if it weren’t for those, he doesn’t think the restaurant would be doing as well now.

“I just want to thank the community for supporting the Boat House since this stuff’s been going on and trying to do the best that we can do,” Olivas said. “Thanks to everyone for supporting the business and we’re not going anywhere.”

Charlie Harguth and Katey Hodgkins are a part of the Innovation Plan team with Isaiah Johansen that is going to the state DECA competition. The competition will be in March. (Photo courtesy of Donna Hodgkins)

Laney Srp, Sydney Ludwig and Ella Pehrson are members of the DECA Start-up Business Plan team heading to the state competition. They are one of three teams competing for Waseca at the state level.  (Photo courtesy of Donna Hodgkins)

The regional DECA competition was changed this year. Each school hosted the regional competition for its own students to compete, instead of all schools from the region competing in one building for a day. This was done due to COVID-19 to keep potential exposure limited and to allow for better social distancing.

“[I’m] pretty excited about moving on. It’s my first time and I didn’t expect it at all,” said Johansen, a senior.

Hosting the regional competition at each school in the region was a positive for some students, especially those who had never competed before.

“I feel that the virtual format was easy and a lot less nerve-wracking,” sophomore Hodgkins said.

DECA has existed for more than 60 years to prepare emerging leaders and entrepreneurs for careers in marketing, finance, hospitality and management in high schools and colleges around the world. It also enhances the co-curricular education of members through a comprehensive learning program that integrates into the classroom instruction, applies learning, connects to business and promotes competition.

The state DECA competition will take place at the Hyatt Regency in Minneapolis with the theme of Next Level. Students will compete to continue on to the International Career Development Conference in Orlando, Florida.

Waseca students will continue to prepare on their own or with their group leading up to the state competition.

“Practice really just depends on your event, and if you have a teammate,” Johansen said. 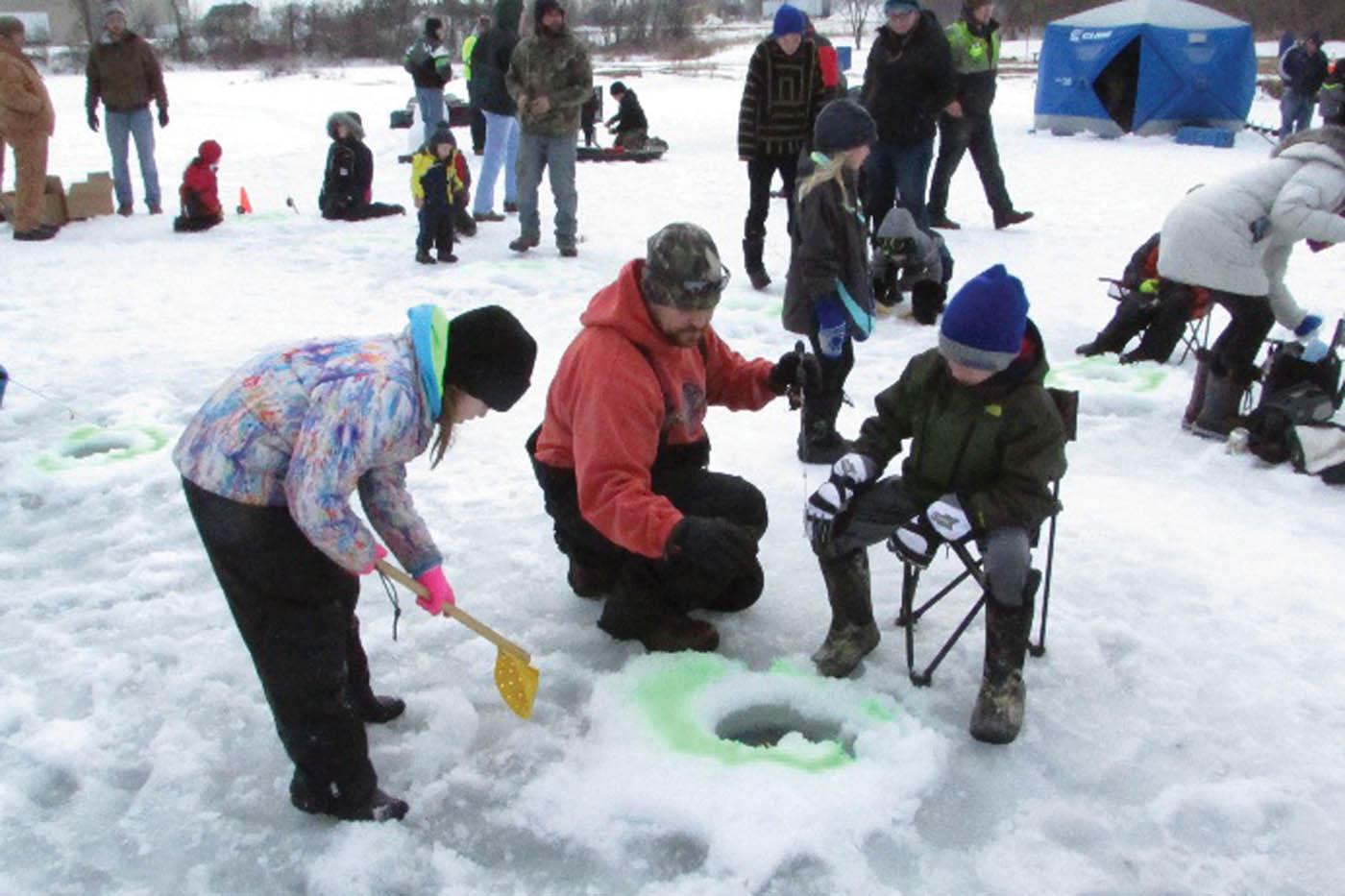 In this file photo, Owatonnans take part in family ice fishing on Lake Kohlmier. The Beyond the Yellow Ribbon Owatonna organization will be hosting their second annual ice fishing contest on the lake come Saturday morning for past and present servicemembers and their families in the surrounding area. (File photo/Southernminn.com)

The Waseca City Council is returning to in-person meetings at City Hall for its next meeting in February.

The city council meetings have been virtual since April 2020 due to the COVID-19 pandemic. The council has directed City Manager Lee Mattson at recent meetings to find a way to return in-person meetings. Mattson said during the council’s Feb. 2 meeting that councilors could return to in-person meetings in the council chambers with social distancing and masks on.

Anyone not complying with the Gov. Tim Walz’s executive order requiring people to wear a face covering inside public spaces will be asked to leave the council meeting.

It will cost about $200 for additional cables to spread the councilors around the chambers. The PEG Channel Fund, which is funded by dedicated payments from the city’s two cable providers, would pay for the additional cables required.

Another additional option would be to add Zoom using Mattson’s computer to allow the public to dial in and listen to the council meeting, but not to speak during the meeting.

“This is not by any means guaranteed and I’ll say that I’m not perfect, but I sure do like to move forward and progress,” Mayor Roy Srp said of the suggestion of bringing the council back to in-person. “I want to be sitting in here with you folks.”

In other action on Feb. 2, the council approved a motion to not send Waseca police of fire members nor members of the local SWAT team to the city of Minneapolis to help with the civil unrest caused by protests that started in May 2020. The approval came after a brief discussion. City staff, with the input of Police Chief Penny Vought reviewed the issue and made this recommendation to the council at the meeting.

“I do not think that we should be responsible for backing up the Minneapolis Police after all of the civil unrest,” Srp said.

Councilor Mark Christiansen opposed the motion because he didn’t like that the council was singling out one city to not help.