A voter in Waseca turns in her ballot after voting. All polling locations in Minnesota closed at 8 p.m. and unofficial election results came shortly there after. (Bailey Grubish/Southernminn.com)

Though a majority of the city council election races were uncontested, the Ward 2 seat was a race to the finish for the two candidates vying for the seat.

Tlougan is finishing his third term as a council member with Mansfield beating him out for the seat.

“I’m clearly pleased with the results,” Mansfield said. “I look forward to working with Mayor Srp and the rest of the city council and moving the city forward. I hope to do my best for the community and for the citizens of Waseca and I will serve them the best I can and I am grateful for the support that I have had throughout my campaign.”

Recently, Mansfield and Tlougan participated in a debate at the Waseca Junior Senior High School in the Performing Arts Center. They were a part of the Coffee Break Debates held by the Senior American Government classes and Political Science classes.

During the debate they were able to share their views and platforms they ran on with students and community members.

“Faith because I’m a faithful man, I wake up in the morning and I pray to our Lord Jesus Christ. He gives me the grace to persevere through the day and that I be a blessing to people,” Mansfield said at the debate. “Family, my faith informs my conscience so that I look to serve my family, my wife, my children, outside of that, my community, which is why I feel the call to persevere in this endeavor. Veteran when I was 17, I was activated to active service in the first Gulf War, fought as a military police and came back. By the time I was 19 I was already a veteran and I learned in that experience that to serve a community it requires sacrifice sometimes, but it also brings us together. I started a small business downtown, we’re very vested in the community, my family loves it and I love this community that is why I am seeking votes for the city council and to serve in this capacity…”

He owns the Ward House Brewery in Waseca and sought this election as an opportunity within the community.

“I have two main priorities,” Mansfield said in a previous WCN article. “The first is to work with the city council to reduce spending and reign in the local taxes. The second is to meet with local business leaders to find ways of bringing more new businesses to Waseca. Some of this can be accomplished through lower regulations and fiscal reform. The other issues I am in favor of are keeping our community safe by supporting our local law enforcement and emergency services, keeping our streets open all winter and finding a way to keep our lakes clean.”

The elections for Ward 1, special election Ward 1, Ward 3 and Waseca mayor were uncontested in the 2020 election.

Jeremy Conrath won the special election Ward 1 seat to take over for incumbent Larry Johnson, who didn’t file for re-election.

“The main reason is my wife and I wanted to get a different house after a couple of years when she is done with school and I wanted to have more options of houses than just Ward 1 (although Ward 1 is Great),” Jeremy Conrath said of why he ran for the special election Ward 1 seat. “I didn’t want to have to resign from the council for simply moving.”

He will fill this position for the remaining two years of the original term from 2018-2022. The council appointed Johnson in 2019 to take over the seat when Ann Fitch vacated it due to conflicts with her then-new position as the executive director of the Waseca Area Chamber of Commerce.

Jeremy Conrath said his top priority is to guide Waseca through the economic struggles associated with the COVID-19 pandemic.

“I want to continue to fix Waseca’s infrastructure. I also want to attract new businesses to town and be as financially responsible as possible,” he said.

Ted Conrath will take over as the Ward 1 seat on Waseca City Council.

“First, I want to thank all the people who came out to vote and I look forward to serving the people of Waseca,” Ted Conrath said.

Jeremy Conrath is the current chair for Ward 1 and will continue to serve on the council in the special election Ward 1 chair.

“To help make the city as financially responsible as possible,” Ted Conrath said of his top priority as a council member in a previous WCN article. “To help our current businesses in whatever way possible make it through the COVID-19 pandemic.”

Incumbent Christiansen ran for his seat again in Ward 3. Srp ran as incumbent for another two-year term.

Waseca County absentee and mail-in ballots increased significantly for the 2020 election. Typically there are about 500, but for this election the county received 4,098. (Bailey Grubish/Southernminn.com)

Waseca County jumped in absentee and mail-in ballots for the 2020 election.

“That is a very large increase,” Spooner said. “I would say some of it is COVID-19, some of it is mail-in and all of the media attention on the early voting has brought people out.”

Spooner said her team put in long hours to get all of the ballots processed along with handling the daily tasks.

“I have absolutely incredible staff and everyone worked a ton of hours,” Spooner said. “Basically we had eight people processing, in addition to doing our normal daily activities.”

Waseca County started receiving absentee and mail-in ballots on Sept. 18. Spooner said the traffic of people returning the ballots stayed continuous from the first day all the way through Election Day. Although voters never had to wait long to turn in their absentee ballots, she said.

Absentee ballots typically need to be submitted by election night and are counted at that time, but due to COVID-19, the deadline for the County Auditor to receive the ballots is Nov. 10 as long as it is postmarked by the election. However, an Appeals Court ruling found that the ballots arriving after Election Day need to be separated from the rest of the ballots in case a court ruling declares them invalid.

“We did get them all processed,” Spooner said. “That’s the bottom line, getting them processed and getting through.” 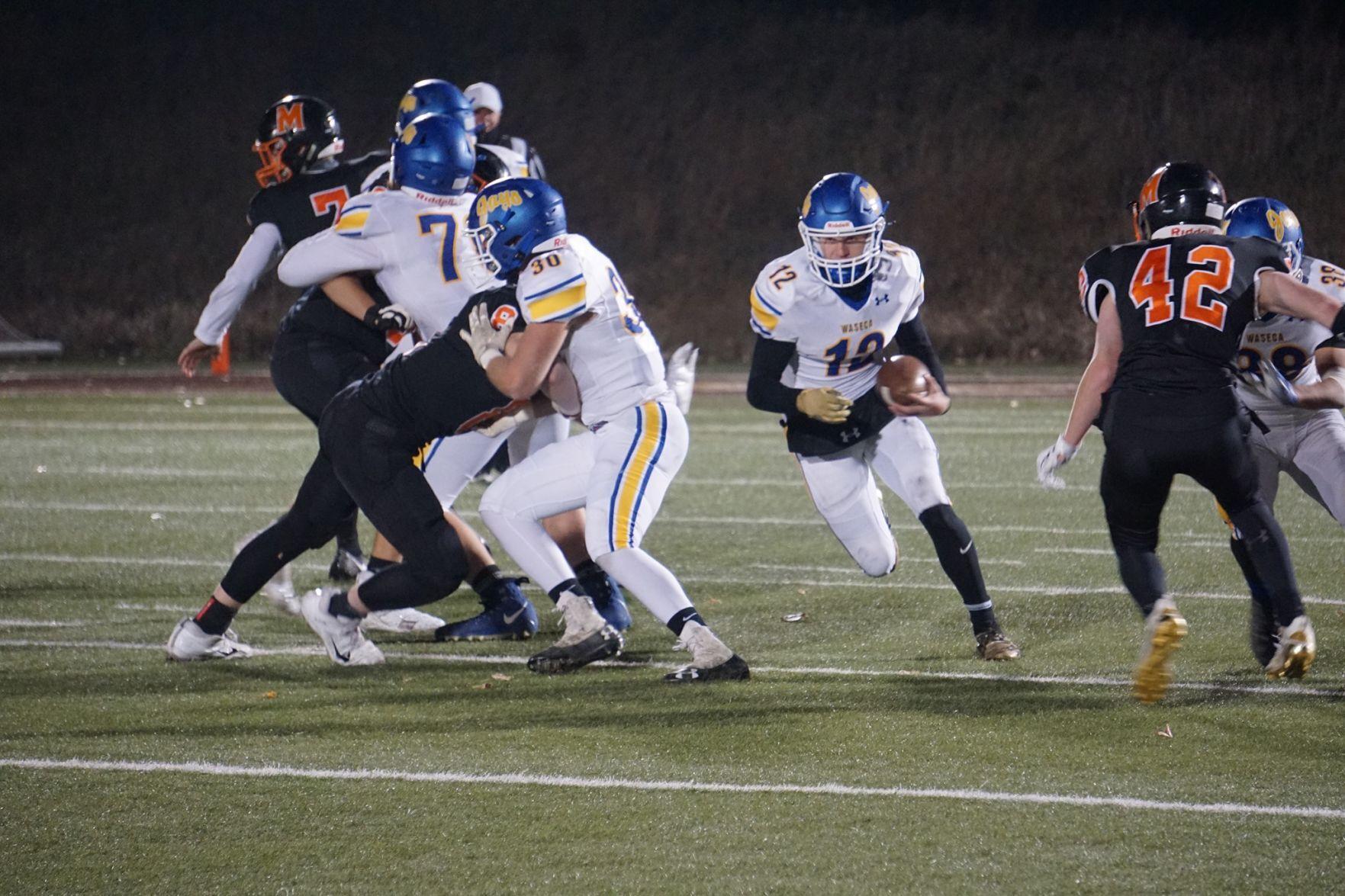 Waseca quarterback Ryan Dufault rushes through a hole Friday against Marshall. Dufault ran for 142 yards in a 21-7 victory over the Tigers that snapped a 29-game home winning streak for Marshall. (Photo courtesy of Waseca Football Association)