Fear of harm to property values and a perceived misalignment of city priorities were among the biggest concerns of local residents regarding a potential development at Gaiter Lake.

Dozens of community members gathered Oct. 26 at the Waseca Christian Assembly Church to learn and give input on the 62 acres of city-owned land just west of Gaiter Lake for which the city requested development proposals last year. Officials from Southwest Minnesota Housing Partnership (SWMHP), a nonprofit community development corporation serving rural Minnesota counties, stood by posters that provided information for and requested feedback from community members regarding the potential development. Most visitors were homeowners who lived nearby. 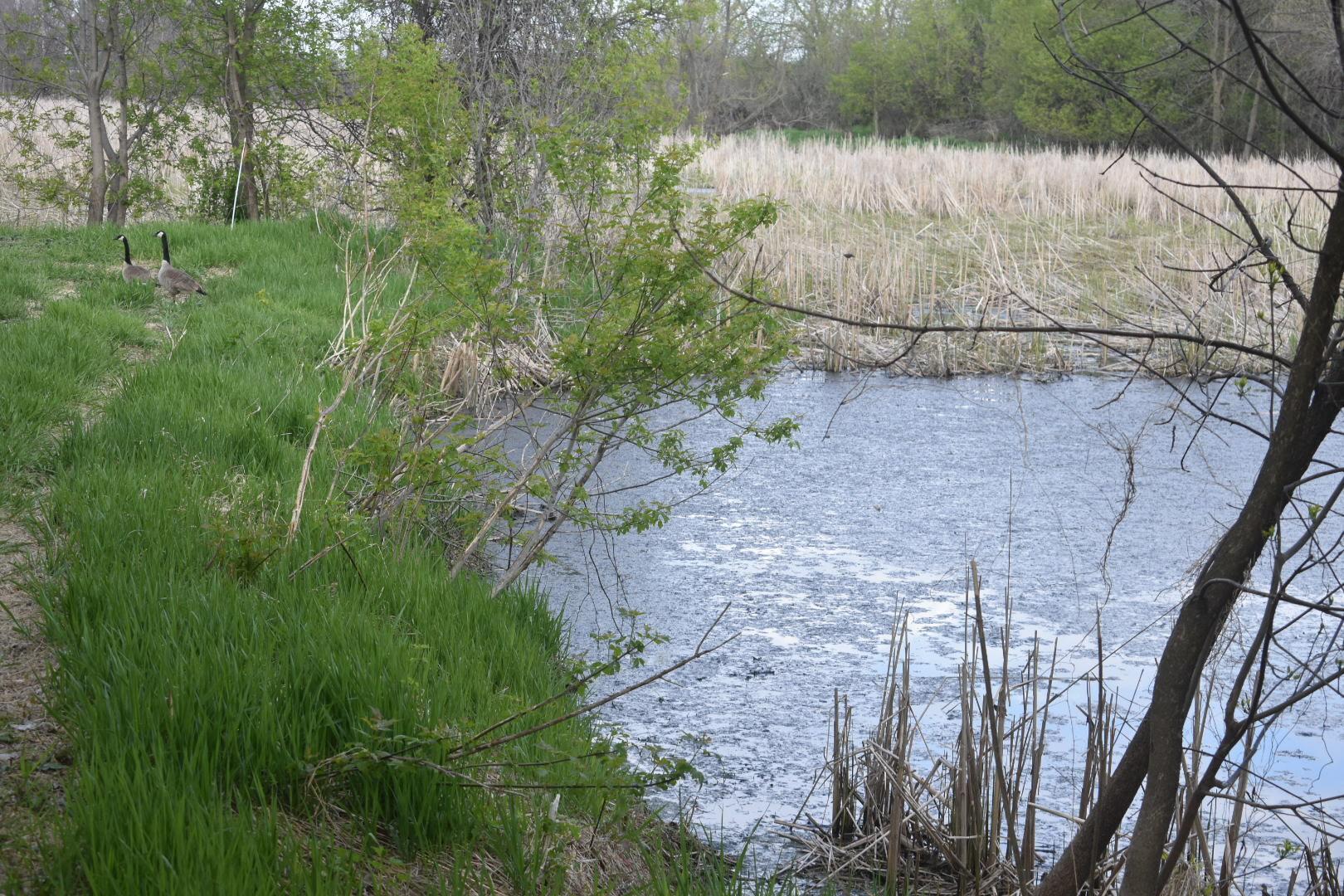 Waseca community members learned and gave feedback on the potential development of Gaiter Lake at a community open house on Oct. 26. (File photo/southernminn.com)

Beyond providing information from a recently conducted Waseca housing study, SWMHP officials asked visitors to place stickers on a poster indicating how many bedrooms they would want if they were to rent or buy a home in Waseca, as well as select the styles of home that most appealed to them.

Visitors were also asked to rate certain elements of housing by importance, including walkability, having the option to use solar energy and the presence of a basement. 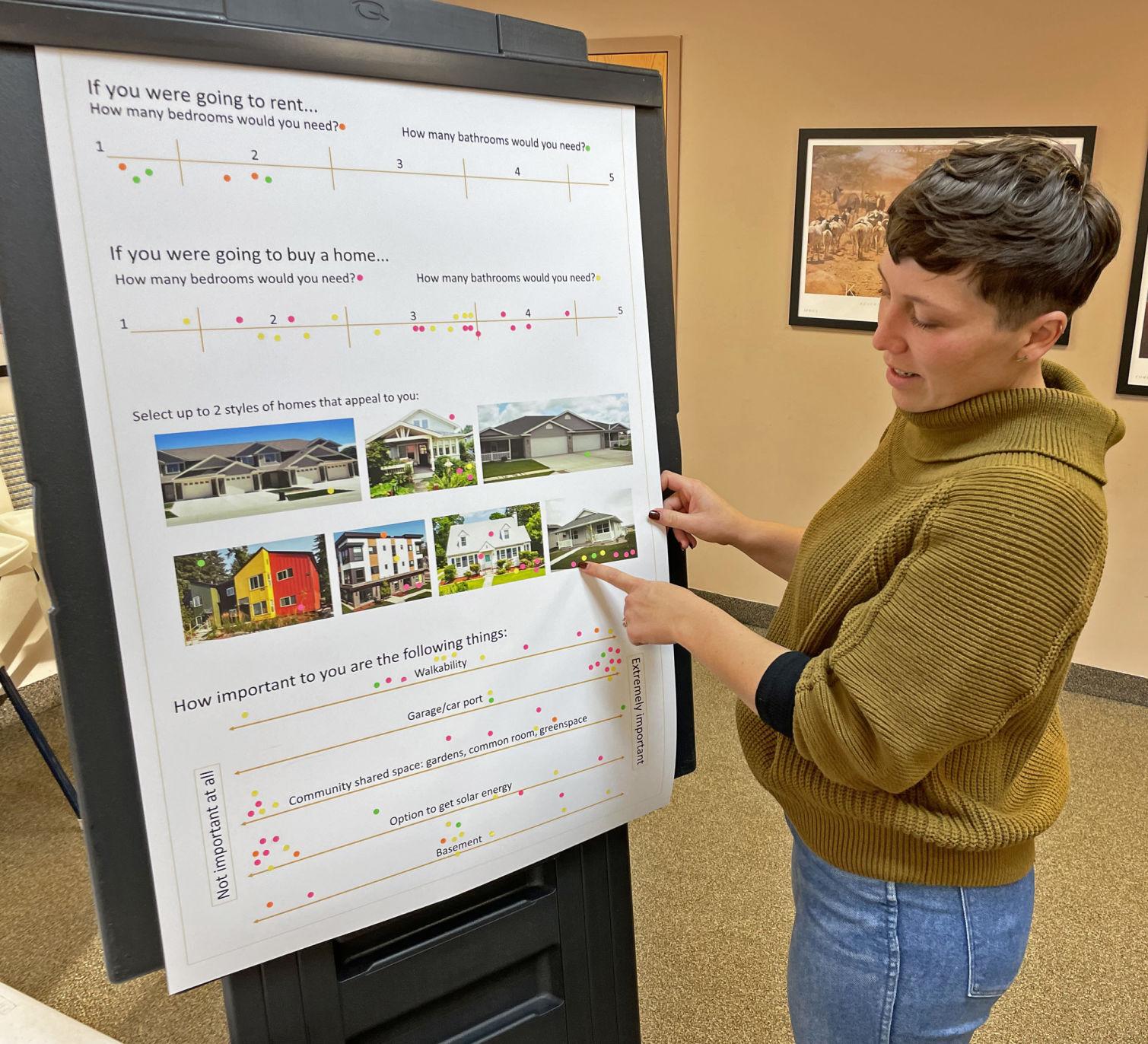 Chad Adams, chief executive officer of SWMHP, said that SWMHP is planning to provide a development proposal to the city for consideration and feedback within the next few months. The best case scenario for him, he said, would be getting started on site work and infrastructure in 2022, with home construction beginning further out.

The feedback that SWMHP got from residents at the community open house, he said, was mixed.

“Just about everybody was in agreement with the housing study report that there is a great need for housing development,” he said, though adding that there were “some who wanted the agricultural field to be there forever” and never be developed. 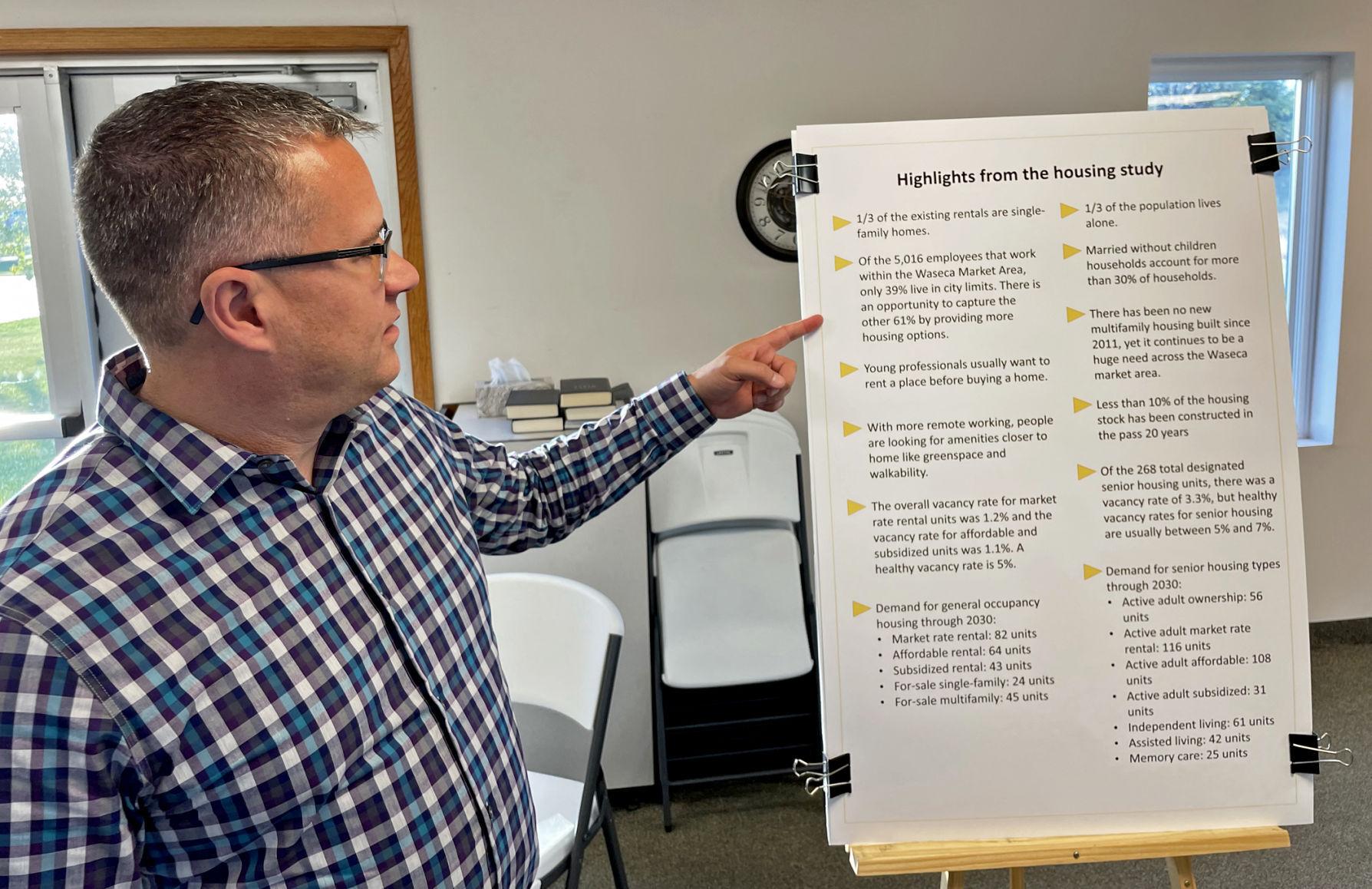 Among local residents and business owners present at the open house — all of whom asked not to be quoted — there were concerns about the development, including that the arrival of affordable housing would lower property values for their own nearby residences. Others expressed frustration that development of new housing was being planned in Waseca before a grocery store had been secured and lamented the lack of other amenities like a gas station near Gaiter Lake.

Some also questioned the results of the recent housing study conducted in June for the city of Waseca by Maxfield Research and Consulting, a real estate research company, which found a vacancy rate of 1.1% for affordable and subsidized units and 1.2% for market rate rental units in the city. A healthy vacancy rate is closer to 5%, which promotes more competitive rates and allows for greater consumer choice.

According to Gary Sandholm, economic development coordinator for the city of Waseca, that low vacancy rate — down from 4.9% in 2016 — makes it harder for people working in Waseca to move there, forcing them to live in New Richland or Janesville if not Owatonna or Mankato.

One thing that Adams said he took from the community open house was that while there was support for the development of workforce, market-rate and single-family housing near Gaiter Lake, “there might be better sites in the community for affordable housing.”

The June 2021 housing study for the city of Waseca can be found on the city website at bit.ly/3nCvo8v.

After years spent debating whether the city of Waseca should develop the Highway 14 west interchange to create more industrial space, the city has moved to pursue funding while stopping short of committing to develop the parcel.

At an Oct. 19 Waseca City Council work session that started an hour before the regular meeting and continued for nearly an hour afterward, councilors disagreed on how to prioritize the development project alongside other needs, such as attracting a grocery store and building housing.

As City Manager Lee Mattson explained to the council, the purpose of developing the west interchange would be to attract businesses that may want to relocate to or expand within Waseca, but want their own building rather than locating to an existing facility. Due to its access to residential areas, among other things, Mattson said the west interchange area has been flagged as a worthwhile site for development. It would be used for mostly industrial purposes with some possible commercial use as well.

With a price tag of just over $8 million, though, Mattson added that at least $6 million would need to be secured through state and federal funding if the city were to pursue the project. At that point, he asked the council how much involvement the council would be willing to have with the project.

Councilor John Mansfield established right away that the development was not a high priority for him, that taxes were already too high and that he would be comfortable letting Conagra, a packaged foods company that owns the Birds Eye vegetable processing plant in town, or a solar farm take control of the site and develop on it.

“For me, this is a bedroom community and we need to develop that,” Mansfield said. “We need to get a grocery store. We need to develop some housing. I think after we do that, then we can start to pull in some more industry.”

Councilor Jeremy Conrath agreed, citing the price tag and saying the development was his “bottom priority.” Councilor Ted Conrath said he’d “love to develop, but not at that cost.”

After about 10 minutes’ discussion in which councilors displayed a lack of interest in developing the west interchange, Economic Development Coordinator Gary Sandholm implored the council not to close the door on developing the site.

“It’s keeping the door for the future open,” Sandholm said, adding that if a solar farm or Conagra takes control of the parcel, there is no guarantee it will be become available to the city for the next two or three generations. He said this would be “quite a constraint” for Waseca, given Highway 14’s potential for the future.

Jeremy Conrath questioned whether developing the west interchange for industrial purposes would even make sense in Waseca, given the scarcity of local housing options for prospective employees on whatever ends up being developed there. Sandholm responded that there are just under 300,000 working-age people in a 50-mile radius of the area.

“That’s commutable,” he said, adding that housing can be found in Owatonna and Mankato. “If we have the jobs here, that’s a magnet.”

The real cost of development

While Conagra would like the additional water pressure for their operations, Mattson also explained that the city needs the watertower for its own long-term development purposes as their residential population expands northwest.

“At this point, I can’t say with certainty that it actually costs the city anything to add the west interchange to the tower project,” he said.

Mansfield questioned the meaning of the city’s commitment, claiming that it only committed to Conagra to “look into” seeking funding for the watertower.

“It’s too expensive,” he said. “There’s no way on God’s green earth we’re building them a watertower out there.”

In response to Mattson’s comment about the west interchange development not costing the city anything in the long term, a majority of the council expressed an interest in pursuing federal funding to develop the west interchange, despite discomfort with its price tag in the short term.

“Do I want to close the door? No. Is the cost way too much? Yes,” Ted Conrath said. “I think that the compromise here would be we try to go forward and if it gives us a black eye, so be it, but we made an effort, we kept it alive, we tried … I’m not committing to anything beyond that.”

"This is a bedroom community ... we need to get a grocery store. We need to develop some housing. I think after we do that, then we can start to pull in some more industry.”

“It’s keeping the door for the future open.”

Waseca School Board issued a number of reports at the Oct. 28 meeting on issues including mental health, declining enrollment and the outdoor classroom. (File photo/southernminn.com)

The great education disruption of COVID-19 has not been easy for students. For the Waseca School Board, a new school year means a new chance to get back on track.

School Board members discussed a broad range of items at the Oct. 28 meeting, from that difficult adjustment and declining enrollment to radon test results and the outdoor classroom.

Superintendent Eric Hudspith opened the meeting with a discussion of mental health support for students and staff.

“We go hard those first six weeks getting into our routines,” Hudspith said. “The routine was off last year for all of our students and our staff.”

Hudspith said that the school district is working on providing options for students and staff to receive mental health support when they need it. He said he’s heard from students that they can tell the staff is as stressed as they are, and emphasized the importance of everybody continuing to work hard to support each other as the district transitions back into a “somewhat normal” school year.

He went on to say the district is hiring new staff, including substitute teachers, although attracting paraprofessionals is the biggest challenge right now.

He implored members of the public to send in an application if they have an interest in working with students and emphasized how well Waseca Public School students treat substitute teachers.

Hudspith concluded his report by saying the district is continuing to make progress on its career pathways program, with a goal of having the spring registration guide help students choose courses throughout high school based on their future career interests. He added that local businesses have been reaching out to the district asking if students were interested in job shadowing opportunities.

Director of Business Services Elizabeth Beery presented a snapshot of the school district’s finances as of Sept. 30 to the School Board. Expenditures are currently in line with the way the district has budgeted for the year, she said, with 15% of the year’s budget spent so far this fiscal year compared to 14% by Sept. 30 the previous fiscal year.

Revenues, which Beery said she’ll be able to report on next month, are trending as they were expected to: down.

“We’ve been projecting declining enrollment for the last 10 years,” she said.

Referring to a demographic study and other predictions based on birth counts, which are taken by counting the number of 0-to-4-year-olds in the district to predict kindergarten enrollment rates, Berry reassured the board that the declining enrollment is in line with how the budget has been built for the year, though she added that the trend is something she will continue to monitor.

School Board member Charlie Priebe updated the board with highlights from the health and insurance committee meeting, which included a report of excellent air quality in the school district buildings. It also included the results of tests for radon, a naturally-occurring gas that can cause cancer, and found that they came back showing acceptable levels of the gas.

“It’s gonna be exciting to see what comes of this,” she said.

To view graphs put together by Director of Business Services Elizabeth Beery to help the School Board visually understand the budget and expenditures for Waseca Public Schools, visit the following: