Ultimately, it came down to trust, and the staff and executive team at River’s Edge Hospital and Clinic trust their long-time colleague, and soon boss, Paula Meskan.

After conducting final interviews with four candidates Feb. 10, the River’s Edge Hospital Commission, with a significant push from staff, selected Meskan as the new CEO at River’s Edge. The hospital will now enter into contract negotiations with Meskan, who is expected to accept the offer.

Meskan has a 12-year tenure with River’s Edge Hospital and Clinic as chief nursing officer, where she has developed and maintained partnerships with outside health care agencies to develop specialty service line coverage.

As chief nursing officer, Meskan was the fifth member of the executive team under former CEO George Rohrich and more recently Joe Stratton, who proved an ill fit and was not renewed after six months. Meskan will need to make the leap from colleague to boss, which was the greatest concern for members of the Hospital Commission and the St. Peter City Council.

“I can tell you from experience that, No. 1, she does know how to have a tough conversation,” CFO Zook said. “No. 2, she negotiates contracts better than I do. And No. 3, she does have a vision for where we want to go, and she was instrumental in putting together (the hospital’s current setup).”

Experience Officer Holden said she has done her best to take her relationship with Meskan out of the hiring process, and she still came out feeling that her colleague was the best choice for the leadership role. She noted that Meskan has been interim CEO for months now, and things have gone well.

“Regarding the separation of becoming peer to boss, that’s definitely a concern for me, but all of us as an executive team in the last few months, we’ve had more productive and efficient discussion than I’ve seen in my six years here,” Holden said. “I think the vision comes from the strategic plan, and all of you (the Hospital Commission) were involved in that. What she’s doing as the interim is working that plan; her vision is your vision.”

The commission was unanimously positive toward Meskan, but some had a different top choice.

The other candidates were Andy Lankowicz, a president at St. Alexius Health Devils Lake Hospital since 2015; Shelby Medina, who has 20 years of leadership experience in the health care industry; and Charisse Oland, who was a CEO at a number of rural health care organizations.

In the first round of voting, where commission members and councilors stated their top two choices, based only on their interviews, Oland got the most votes, with Meskan just behind and then Medina. Lankowicz was taken out of the running.

As the discussion continued, the board frequently turned to the executive leadership team for feedback, and they noted concerns about the other two candidates. Oland, they said, did not present as well in her time with staff at the hospital, receiving some negative feedback from her visits. With Medina, there were concerns with whether she would take to the hospital’s current processes and commit to them going forward.

Meskan is a known commodity, as was mentioned by a few people in the room, and while her greatest weakness is a lack of formal experience in a CEO role, no one doubted that she could learn what was needed. Commission member Carolyn Dobler also noted that Meskan would not need time to acclimate to the hospital’s culture and could spend that time focusing on other things.

With staff heavily backing her, Councilor Brad DeVos said it was best for the group to support that direction, but he noted that staff should be equally prepared to accept responsibility for the candidate they advocated for.

“I believe we should follow the staff recommendation for the best chance at success, but if they are pushing us in this direction, they have to accept responsibility for her success, or lack of, as well,” DeVos said.

Councilor Ed Johnson made one of the final comments, summing up a lot of the viewpoints from the discussion.

“I think we’d be missing out on a great asset if we didn’t go with Paula,” he said. “I think once she gets in the chair, she will do a good job.”

In order to ensure a new housing project can move forward, the city of St. Peter is making something of a map correction.

At a Feb. 16 special meeting, the St. Peter City Council voted to annex properties currently not part of city limits, bringing them into the city’s purview. This action was necessary to allow a sewer line extension to run through the properties; the sewer line will service a proposed new housing complex at Traverse Green.

At Traverse Green, a city-developed subdivision in northwest St. Peter, outside developer Community Asset Development Group, LLC, intends to put up a mixture of multi-family and twin townhomes.

Traverse Green, up to this point, has been a city-led development for single-family homes. Similar to the Washington Terrace and Nicollet Meadows neighborhoods, the city built up the infrastructure and partnered with developers (nonprofit or for profit) to build and sell homes. As homes popped up in those first two neighborhoods, they sold quickly, but it’s been slower going at Traverse Green recently.

“There has been no action on the single-family development,” Wille said. “We have 20 of 59 lots that have been developed (at Traverse Green). Our speculative homes, we sold all three at a loss (in 2020).”

One or two Habitat for Humanity homes will be built in the neighborhood each year, but it’s not enough to fill up the neighborhood at the rate the city would like. With the spec homes not selling at value, rather than moving forward with more spec homes, the city’s Economic Development Authority and City Council are hoping outside developers can take the reins.

The council locked into a development agreement with Community Asset Development Group in 2020. The developer purchased 12.8 acres in the undeveloped part of the neighborhood, and it intends to build 66 multi-family units — a mix of multi-family and twin home townhomes — as part of an apartment structure. A potential second 66-unit structure may also be constructed after the first one is complete.

One hiccup for the city and developer in this project is the building of public services into the project area, specifically sewer lines. The city is obligated to extend the sewer line system to reach the new development area, but along the way, the sewer line would run into property that has not been annexed into city limits. 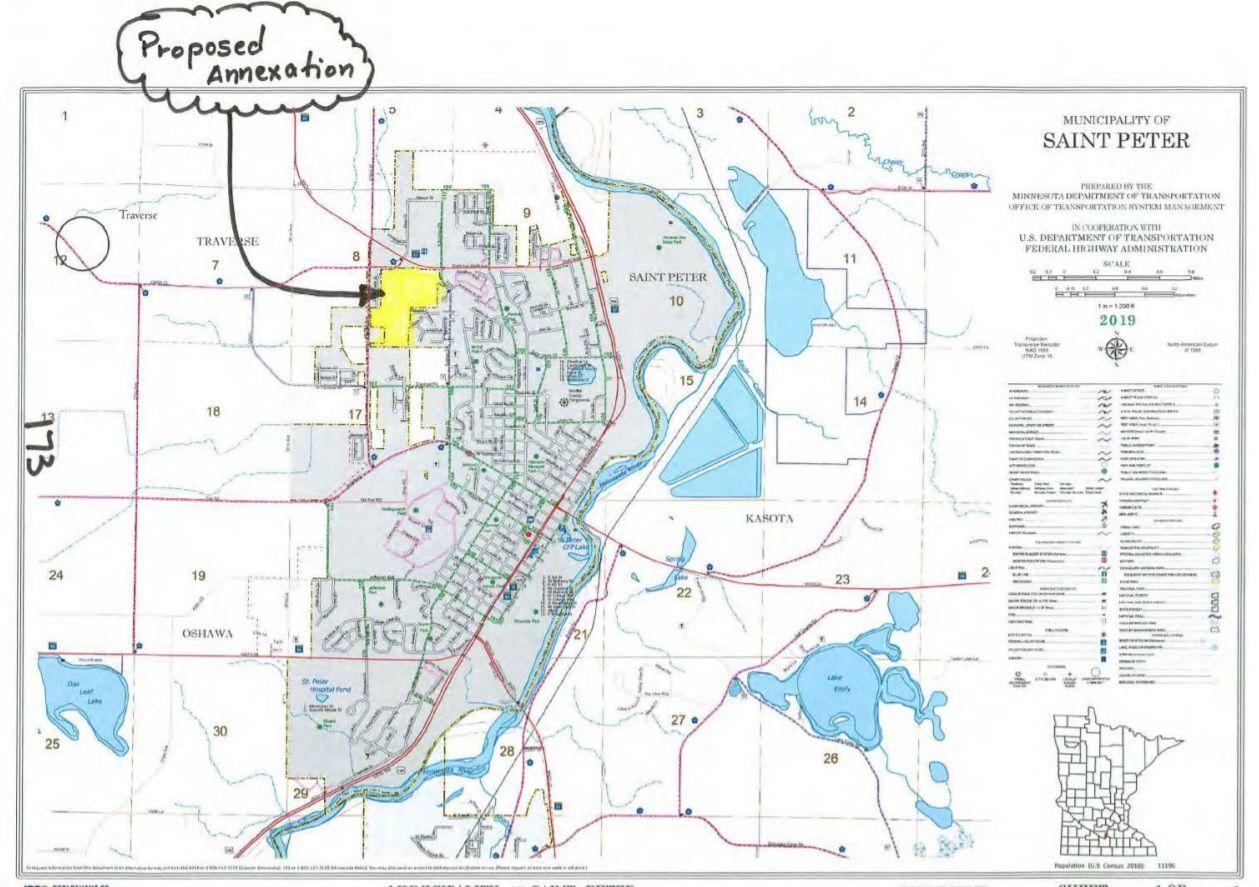 Several properties that are surrounded by St. Peter city limits are not actually part of the city limits, due to leapfrog development in the past. As part of an affordable housing project at Traverse Green, the city is annexing seven new properties into its limits.

This is because, in the past, the city has utilized leapfrog development, meaning land has been “jumped” over as city limits have expanded with new development. This has left some holes in the map, where pieces of land, completely surrounded by city limits, are not actually part of city limits.

In all, seven properties will be annexed into city limits. The city only requires easements from two of them, but it makes the most sense, Wille said, to annex them all at once. As part of the annexation agreement, the city will reimburse Traverse Township, where the annexed properties were previously located, about $800 annually over the next three years for lost property tax revenue.

The next step, after the annexation ordinance is officially posted, is to secure the easements from the two properties needed. The city has an agreement in place with one of the property owners at 140% of the appraised value. The other property owner, Wille said, did not agree to similar terms, and if they still do not agree, the city will need to condemn the land and take it over; that’s a court action that can take about 90 days, but the city will be allowed to move forward before the action is complete.

When the easements are secured, the city can build the sewer line, ensuring the Traverse Green project can go forward and be properly serviced. The land will then be returned to its original state, with the sewer line buried in the ground.