Anticipation for a major project at the airport in Owatonna has been building for the last several months, but a recent development is at last bringing all the pieces together. 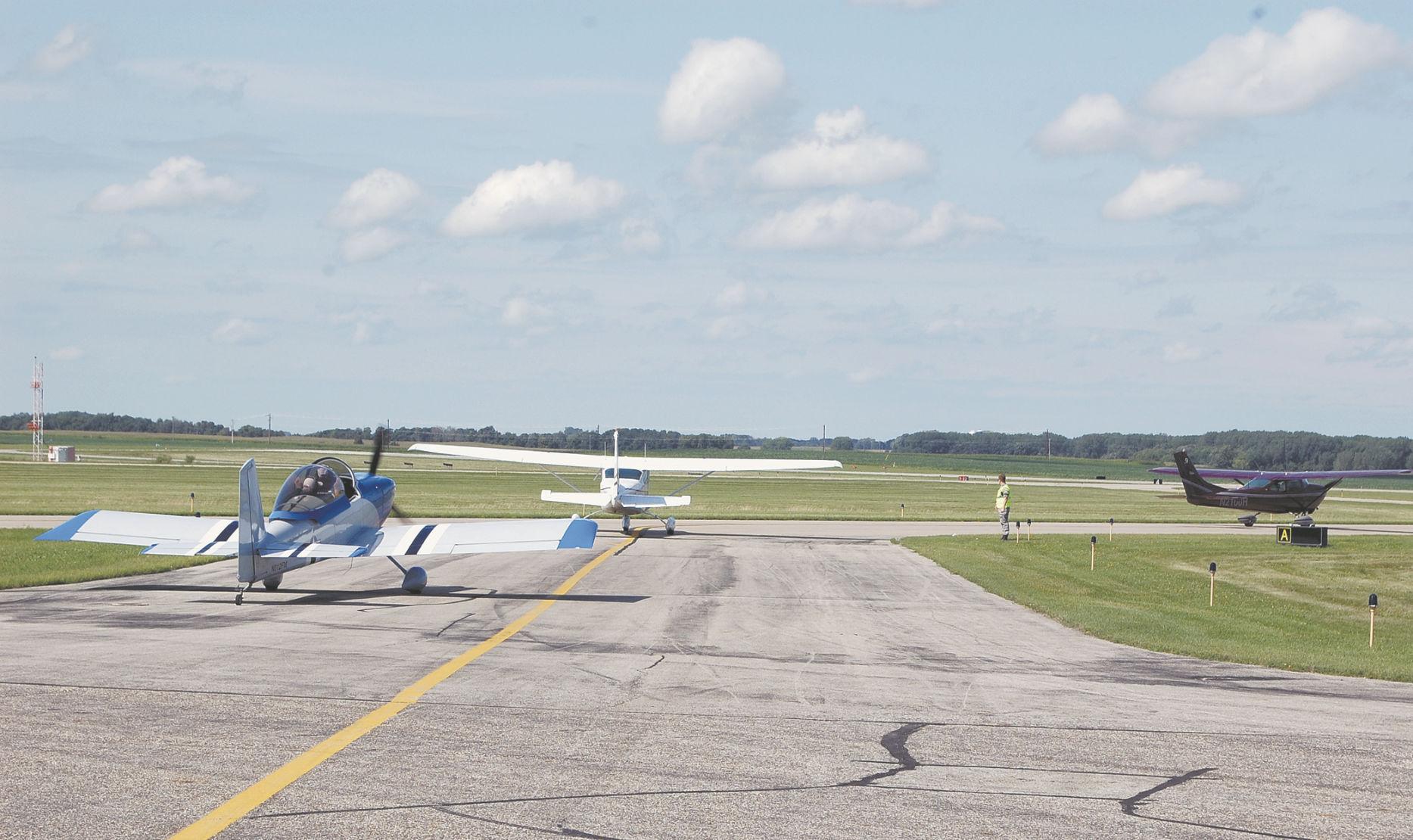 The long awaited airport project that has been in discussion for more than a year will include a new 10-unit T-hanger and taxi-lane. (File photo/southernminn.com)

Airport leaders have had hopes of building a fourth hangar, as all of the existing hangars were full, hence the need for expansion.

There are currently three 10-unit hangar buildings. Last summer, when the project was first discussed on the city level after they were granted federal dollars to go toward the airport, Airport Manager Dave Beaver said the need was crucial.

“We anticipate the need for more [storage] by the time we build another hangar; we do have a number of people who have inquired about hangers and are on a waiting list,” said Beaver. “This project has been identified in our airport master plan as a need we were anticipating, so we are following through with that approved planning guidance.”

Last summer, the Federal Aviation Administration announced that $800 million in airport safety and infrastructure grants would be awarded to facilities in 46 states, Guam, the Northern Mariana Islands, Puerto Rico and the Marshall Islands. Owatonna’s airport was included in the list of recipients, being awarded $272,733 for construction, modification, improvement or rehabilitation of a hangar.

The project plan includes building an additional 10-unit T-Hangar and an access taxi-lane. The grant offer is for $1.6 million for costs pertaining to engineering, construction and administration — most of which is supplied by the federal grants. 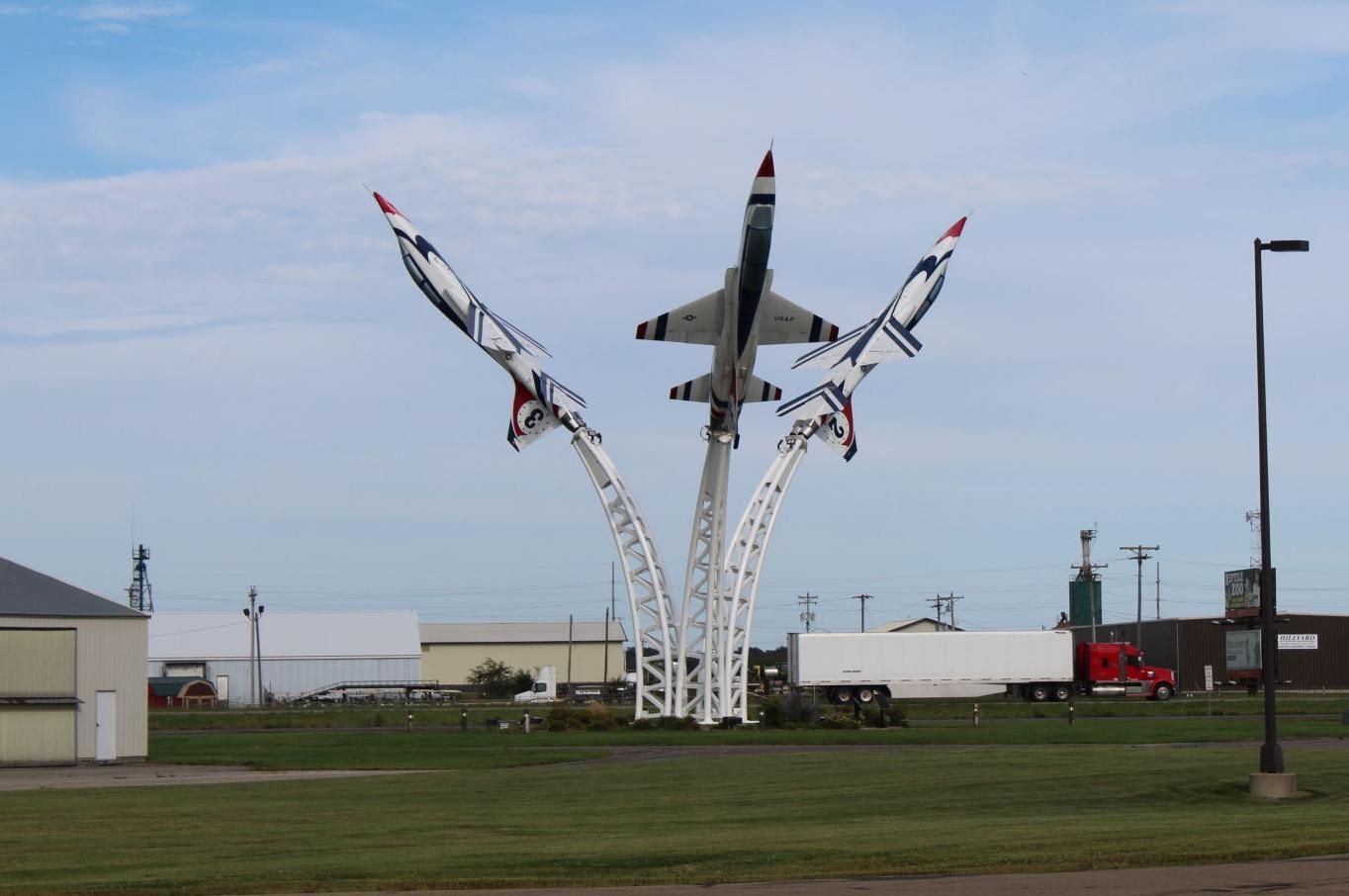 Funding issues have delayed the onset of building a new 10-unit hangar and taxi lane at the Owatonna airport. After months of waiting for a federal grant to come through, officials are happy to announce the commencement of the project in coming weeks. (File photo/southernminn.com)

“We want to increase capacity to meet the demand,” said Beaver. “We haven’t built a new building since 2005. Hangar space all around the state has become limited, and many local airports are adding additional hangar space.”

The hiccup for the city was that the FAA only allocates $150,000 a year. Any airport can hold the funds for up to four years, but that still wouldn’t come close to covering the full cost of the project.

Luckily, airport officials have been able to connect with other airports in Minnesota, which have received the same funding but are not going to use it. They have been able to acquire eight years’ worth of the $150,000 allocations through the Airport Improvement Program, which allows municipalities to transfer such funds to another city in need.

Because it has taken so long to acquire the proper funds and grants, Community Development Director Troy Klecker told the City Council last week that the window for locking in the prices of the original bid has passed. Airport officials are now planning to meet with the contractor who was awarded the bid this spring to discuss modifications to the original plan.

Klecker assured the council during the meeting that all the materials needed will still be the same, however, they will work with a different supplier than in the original bid because of the increase in material costs.

“The grant was just approved Tuesday,” said Beaver. “We will know more of the construction schedule soon now that we have the funding and have adjusted where materials are coming from.”

Pre-construction meetings are scheduled to happen in the next week to discuss timeline details.

“It is anticipated to get started working on the project in the next few weeks,” Beaver said. “Overall competition is expected in July of next year.”

Beaver previously said he anticipates further growth of the airport, highlighting what it can offer to the community, local economy and businesses. Other airport projects are on the to-do list for the future.

"We haven't built a new building since 2005. Hangar space all around the state has become limited and many local airports are adding additional hangar space."

It’s no secret that the Owatonna Fire Department is a tight knit group, and they are looking to expand that opportunity out into the community. 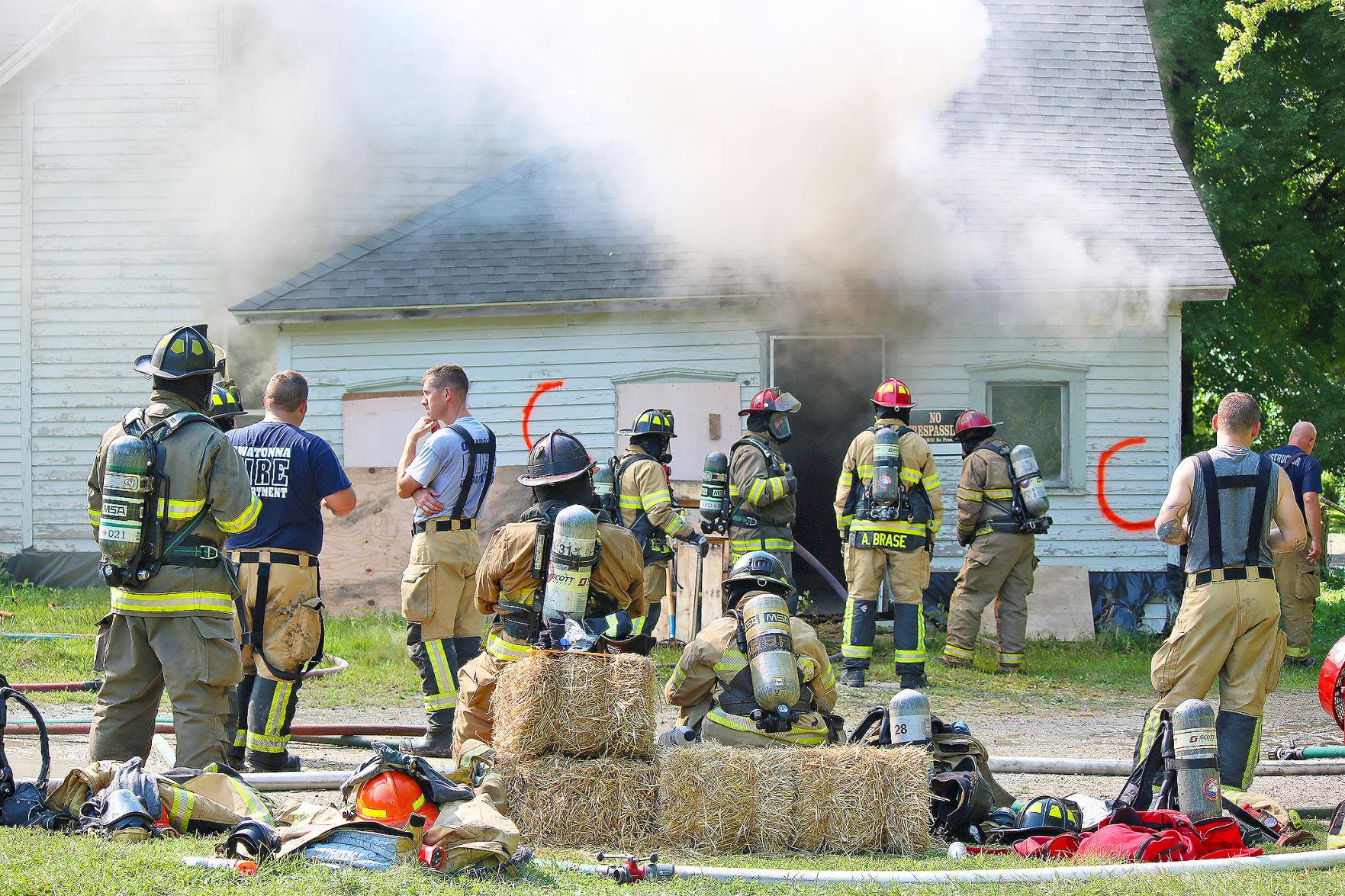 With nearly two-thirds of the local Fire Department being made up of paid on-call firefighters, Fire Chief Ed Hoffman said they have five open spots that he’s opening to fill by the end of the month. Because the Fire Department is such a vital community resource, he is opening up the Fire Hall on Tuesday evening for a “New Recruit Informational Open House.”

“I want people to know what they are truly signing up for,” Hoffman said. “I don’t want them thinking they are going to be running into big fires three times a week — a lot of what we do is public education.”

While the current open positions are not what Hoffman would consider a “shortage” — especially not compared to other industries experiencing exponentially large gaps in their workforce — he said it is important that they stay on top of filling the positions. Because it is continually harder and harder to find paid on-call firefighters, Hoffman said they want to stay ahead of the recruitment before experiencing what he knows other communities are struggling with.

“We’re not critical yet, but with other departments I talk to, I know they’re seeing it get harder to get new people on,” he said.

The reality of a shortage of firefighters is not a new problem, and it is not unique to just Minnesota. In 2019, the National Volunteer Fire Protection Association sent out a survey to fire departments that resulted in the numbers of volunteer firefighters dropping dramatically. It also showed that those who volunteer in fire departments are getting older.

Hoffman said his hope is that, by showing the community the variety of important roles the Fire Department plays in Owatonna, it will spark interest in some new recruits.

“It is significant time commitment,” Hoffman said. “We have three months of training, two nights a week, and that’s just to get in the door. Later, you have EMS training and there is just always ongoing training.” 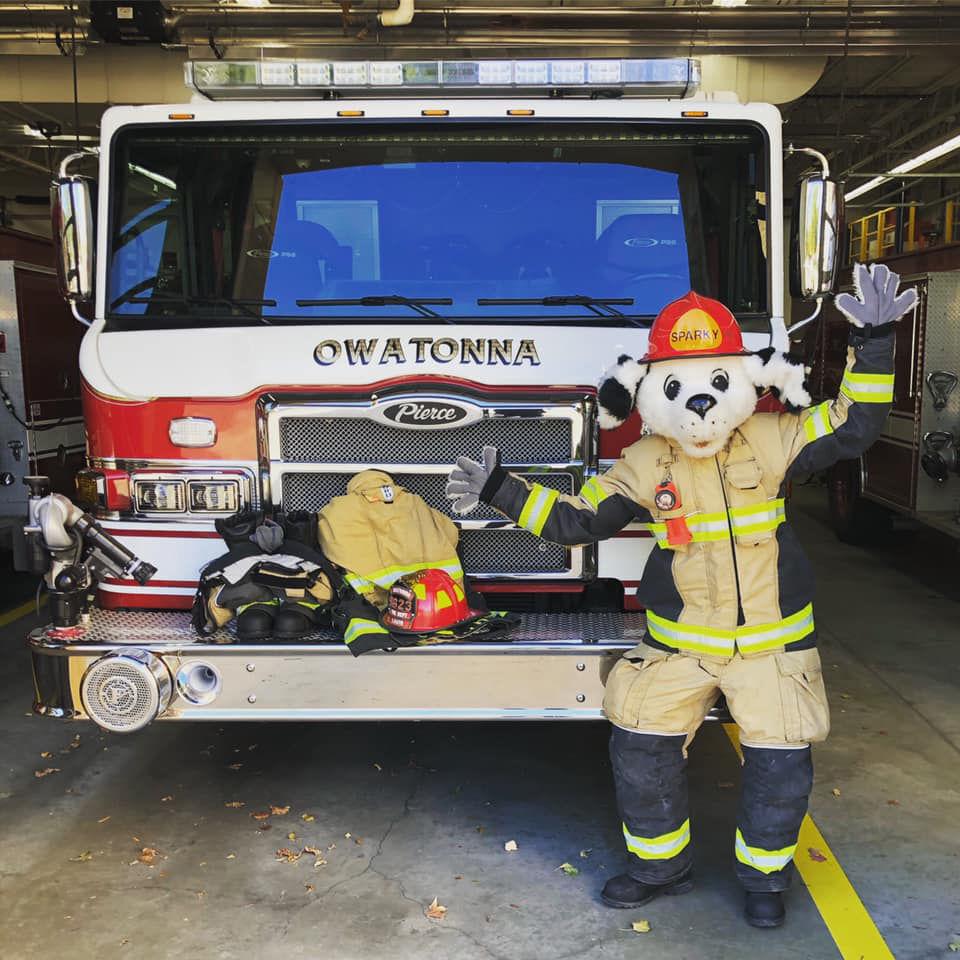 That training, however, is what Hoffman said allows the community to be safe.

“If we’re doing our job right with the training and public education, we hopefully won’t have that many fires to go to,” he said.

During an Owatonna City Council meeting last week, Hoffman updated the council that they will be updating their rural contracts next month and be auditing their different processes to ensure the department is operating efficiently. The city is also working closely with the County Emergency Manager Director to adopt a new emergency operations plan, something Hoffman said the state requires communities update every four years.

While there is no definitive decision on the popular chili feed hosted by the Fire Department each year, Hoffman did state the organizers of the event are leaning toward cancelling it one more time as the COVID-19 pandemic persists.

Firefighters will discuss the hiring process and answer any questions you may have about becoming a firefighter in Owatonna.

Applications can be completed online at www.ci.owatonna.mn.us/307/Employment.

Following the approval of the Pfizer COVID-19 vaccine by the Food and Drug Administration in August, local Public health officials said they have seen a slight uptick in those coming in to start the vaccination process.

Now, Steele County Public Health Director Amy Caron said they are getting everything in order to start providing the Pfizer booster shot. Though they haven’t officially been “given the green light” to start administering the third shot as a booster, Caron said they anticipate that direction to come later this month.

“We’re sort of suspended in wait mode right now,” Caron said. “But we are planning. We know there is a good supply out there and we definitely won’t have the same supply issues we had back in December and January when we had to go with opening it up to tiers of people.”

Caron said the recommendation for people to get the Pfizer booster is to wait eight months from their second dose.

“Many studies have been happening to see what kind of antibodies people have and for how long they have them before they start wearing off a bit,” she said.

The plans for the COVID-19 boosters is that they will be incorporated into the weekly Wednesday clinics held at the Public Health office in Owatonna. Caron said they will be monitoring the traffic closely and, if they have to, will relocate to the Steele County Public Works building on Hoffman Drive/Old Hwy. 14.

“Right now, we have about 20 people per clinic coming in,” Caron said. “But we have that flexibility to operate and do large clinics again. I’ve already put my staff on notice that it could happen.”

Though Caron said there has been vaccination hesitancy in Steele County, she is hoping people will continue to find comfort in the various studies and tests the COVID-19 vaccines have endured. According to Caron, the Pfizer vaccine for COVID-19 is now the “most studied immunization ever.”

“It has been given to so many people that it has allowed for a large amount of studies to be done,” Caron said. “You can’t really get much safer than that.”

Since the Pfizer vaccine became fully FDA approved, Caron said she has seen an uptick in children ages 12-15 getting the vaccine. As of this week, Caron said Steele County residents 16 and older are 65.8% fully vaccinated.

While the Minnesota Department of Health has not been providing data that completely breaks down the new infections as far, as variants and whether or not the patient has been vaccinated, Caron said they can go off statewide data available, in order to assess the reality of the local situation.

“In the state of Minnesota, 85% or more of the new positive cases of COVID-19 are the delta variant,” Caron said. “Based on that number alone, we can assume that the delta variant has pretty much taken over.”

What Caron does know, however, is that the age group with the highest infection rate continues to be those 20-40 years old.

“It’s our workforce,” she said.

Though more children have tested positive for COVID-19 at the start of this school year than they did last year, at this time, Caron said they are not the majority of the new cases.

Because the cases continue to rise, Caron said they are seeing statewide trends of hospitals filling up — both with COVID-19 patients and other patients who may have put off getting medical help during the pandemic to the point that their conditions have worsened.

“Our hospital systems are overwhelmed,” Caron said. “Not only are the beds full, but there is less staff to take care of people … This vaccine is the best tool we have in our toolbox right now.”

With influenza season upon us, Steele County Public Health is preparing to roll out the influenza vaccine in their weekly clinics.

Director Amy Caron said the COVID-19 vaccine is now approved to be given along with other vaccinations, allowing Public Health to offer the two immunizations at the same time.