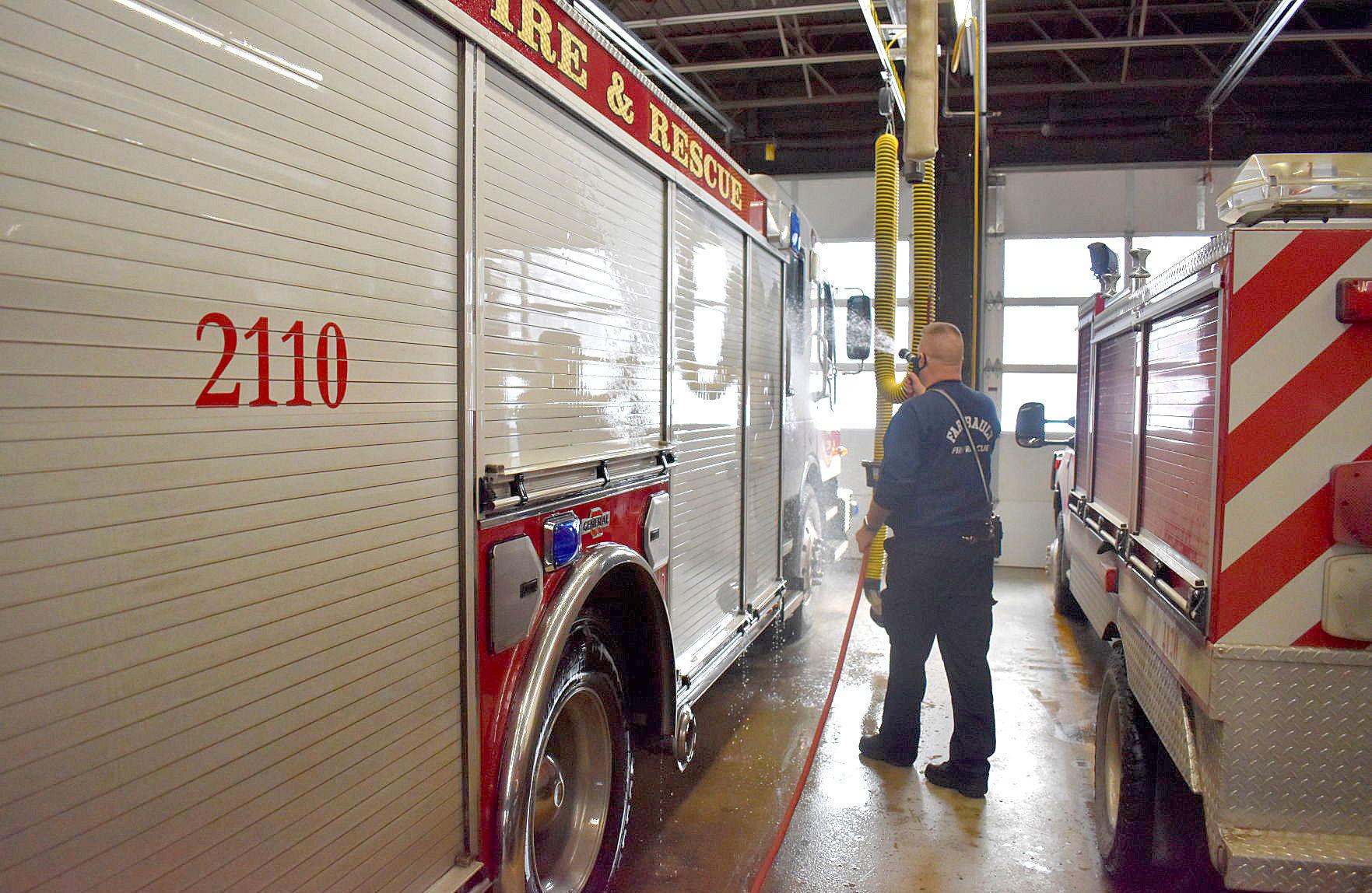 Alex Hanson washes off a fire truck at Faribault’s Fire Station. Cancer, heart disease and mental health issues are some of the biggest challenges faced by firefighters — and too often, state and local governments haven’t done enough to support them. A new bill at the Capitol could help change that. (Andrew Deziel/southernminn.com)

A vehicle driven by 18-year-old Grant Stowe of Owatonna was hit by a train on Wednesday afternoon. Stowe, who was the sole occupant of the vehicle at the time of the crash, didn’t report any injuries. (Annie Granlund/southernminn.com)

A Canadian Pacific train blocked nine blocks of railroad crossings after a vehicle at the East Vine Street and Larch Avenue was struck by the train. The streets were blocked for nearly three hours beginning just before 4 p.m. on Wednesday. (Annie Granlund/southernminn.com)

A vehicle versus train crash that occurred in Owatonna on Wednesday afternoon resulted in some streets in the city being blocked off by the stopped train for almost three hours.

According to the Owatonna Police Department, 18-year-old Grant Stowe of Owatonna was traveling east on East Vine Street near Larch Avenue when the driver’s side rear of the vehicle was hit by an oncoming train at 3:48 p.m. The Canadian Pacific train was traveling southeast.

Stowe, who was the sole occupant of the vehicle and didn’t report any injuries, told responding officers that he had stopped and didn’t see the train.

Crossings along the Canadian Pacific railroad were blocked from North Cedar Avenue to East Rice Lake Street, about nine blocks of railroad crossings, until about 6:30 p.m., according to police. The train could not resume until it was thoroughly checked by the railroad company and cleared for travel.

Canadian Pacific was not authorized to give a statement to their observations or actions, but did confirm that no members of the train crew were injured as a result of the crash.

Stowe was issued a citation for failing to stop not less than 10 feet from the tracks while a train or other on-track equipment was plainly visible and in hazardous proximity.

Owatonna high schoolers Hunter Johnson and Gavin Karow played a concert livestreamed from The Music Space last week. The video from the concert is still up on the The Music Space of Owatonna Facebook page. (Photo courtesy of Mark Woodrich)

Hunter Johnson and Gavin Karow, young musicians from Owatonna were given the opportunity to showcase their talent at last week’s Music Space of Owatonna livestream concert. (Photo courtesy of Mark Woodrich)

Residents will be able to attend a live concert streamed in Owatonna from the comfort and safety of their homes.

The Music Space of Owatonna will be livestreaming weekly live concerts on its Facebook page and on OwatonnaLive.com each Friday in February.

This week’s concert, which is scheduled to begin at 7 p.m., features musician Patrick Schmitt under the stage name Minnesota Kid. Schmitt has recently released his first album and has posted a number of videos and singles online. People who tune in this Friday will hear him sing and play songs off of his upcoming second album.

His music can be described as alternative indie, drawing inspiration from The Doors, Nirvana, Primus and other similar artists. The Owatonna native has been playing for about 14 years and is currently living in Austin. Music by Minnesota Kid can be found on a variety of platforms including Spotify, iTunes, YouTube and Deezer.

Last Friday’s concert kicked off with performances by Owatonna High School students Hunter Johnson and Gavin Karow. The duo played some original songs they wrote together as well as some cover songs. Future musicians to be featured during the February livestream include “The Bow Builders” featuring Rachel Schroeder, Rick Skalicky and Dave Rettenmeier.

The idea for recurring livestream concerts began a few months ago, after Woodrich hosted the Downtown Holiday Cruise concert livestream, which was also projected into Owatonna’s Central Park throughout the evening of the car cruise.

“We kept thinking, well we need to do some kind of concerts because we’re a concert place,” Woodrich said.

After the Christmas concert livestream success, he decided to try hosting weekly livestream concerts from the smaller temporary space the record store currently occupies while the North Cedar Avenue location is under renovations. Woodrich expects to move back sometime in late spring and begin planning in-person concerts once again.

“We’re likely to continue to livestream them,” Woodrich said about future in-person concerts.

Although the Friday concerts are free to watch, donations are being accepted through Paypal to support the Music Space concert expenses and help compensate the performers.

“We want to stay relevant so when we go back, we continue to have people know that we still provide concerts and not just records,” Woodrich said.

If the livestreams go well, the Music Space may continue offering them in March, giving more opportunities to local artists to showcase their talent.

“The artists have something to say and they have good music and I want people to hear it and that’s what the Music Space is all about, is promoting music,” Woodrich said.

With the shuttering of many music venues to the public during the pandemic, the livestreams offer an opportunity for musicians to once again get their voice back out there. Under the advice of a friend, Schmitt kept on doing what he could despite the challenges by posting new music and videos online. That’s when he was approached by Woodrich with the concert opportunity.

“I’m in the process of getting my first album put on vinyl. I love the sound of vinyl,” Schmitt said of the “Don’t Lose Your Hold” album.

While there is no charge to watch, online donations are being taken to support the venue, concerts and musicians. To donate visit https://tinyurl.com/yq8typi1.

Find out more about Patrick Schmitt’s music by visiting MNK on Facebook.