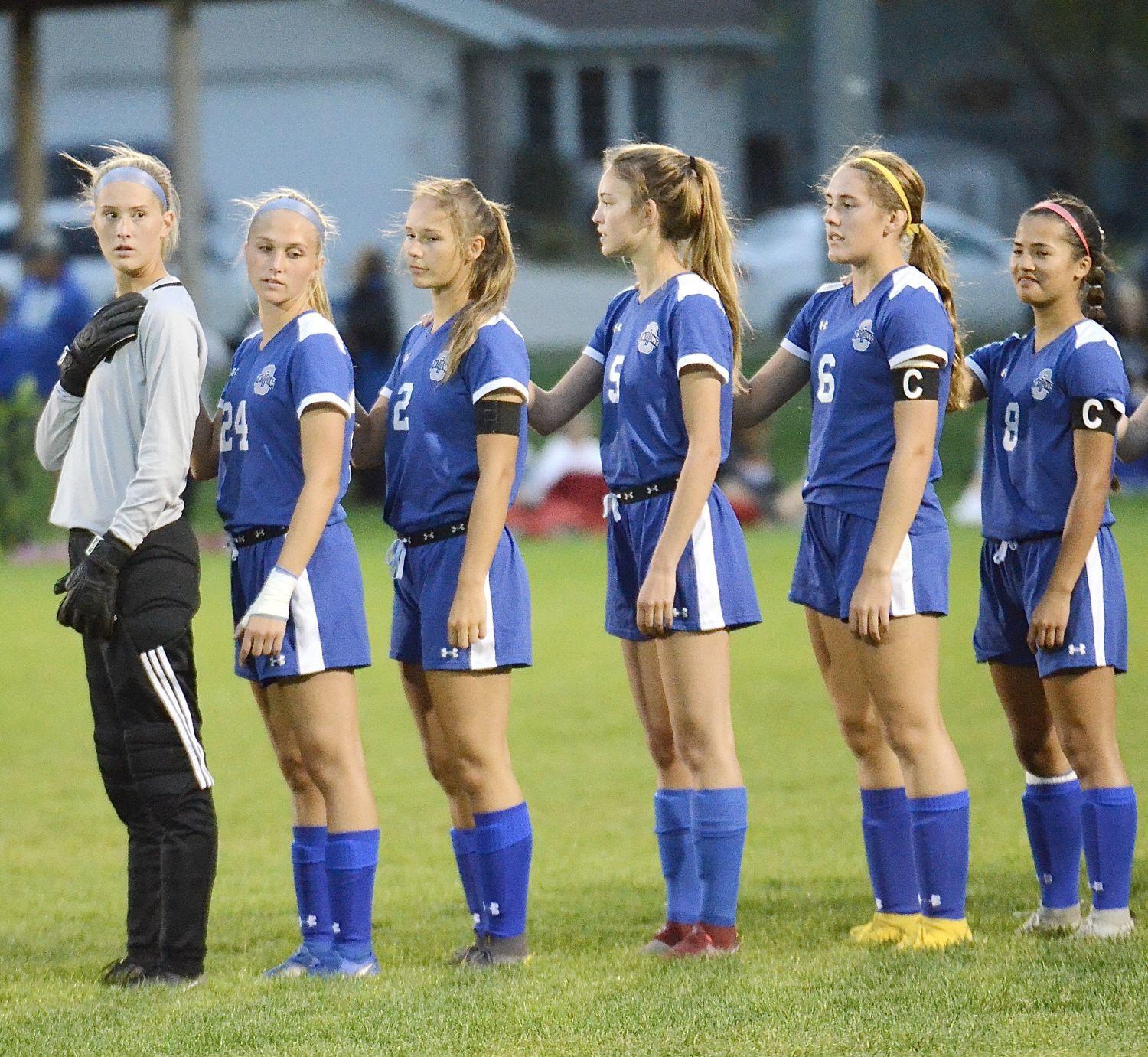 The Owatonna girls soccer team, seen here lining up for the National Anthem during a late-season game at the Owatonna Soccer Complex this past fall, is one of four OHS teams to win Big Nine Conference titles in 2019-2020. (Jon Weisbrod/People’s Press)

While people are still mourning the loss of their local county fairs — specifically the absence of their favorite fair foods — one family decided that the summer shouldn’t be wasted moping around.

Kim Goette and her family have been operating the Pork Chop Sandwiches stand — a staple at the Steele County Free Fair and other summer events — for the last 33 years, offering grilled boneless pork chops either as a sandwich or on the classic stick. Though Goette doesn’t rely on the stand for income, she and her daughter decided to open up shop in their hometown of Blooming Prairie “just to see what would happen.”

“My daughter is a teacher here in Blooming Prairie so she is available during the daytime and I can come in after work, so we figured why don’t we just attempt to put it up,” Goette said, adding that she is someone who simply prefers to stay busy. “The first two days were amazing — it was like being at the fair in Owatonna.”

Though the traffic has tapered off some since opening on June 10, Goette said that they still see plenty of people stopping by their tent set up on the north side of Casey’s General Store. Because of their prime location, Goette said they also get a fair amount of traffic from people simply driving through.

“We had a trucker who drives for Target stop by just the other day and he left us $50 to go toward any police officer who may come by for a meal,” Goette said. “That really was nice and what we like to see, things like this that bring people together.”

Similar to her neighbors, Goette said she was feeling “cooped up” during the stay-at-home order in relation to the COVID-19 pandemic. While the state has slowly begun to open things back up, she said it’s clear that people are still itching to be able to socialize outside their homes.

“We need to be outside and getting together safely,” Goette said. “I think that’s a big reason why everyone is so happy to see us here.”

Goette said that the tent will be open Monday through Saturday from 11 a.m. to 7 p.m. and on Sunday from 11 a.m. to 2 p.m. Though they are famous for their boneless pork chops, Goette has added hamburgers, brat burgers and potato salad from a popular Ellendale caterer to the menu.

“We added some little things like that to offer more than just pork chops, but after going for this long people just know you for that,” Goette said. “At least 90% of our customers come for the pork chops.”

Goette will welcome guests all summer long to the tent to share a meal with friends and neighbors. She said if you can’t find the store in Blooming Prairie to just follow your nose.

“The smell is pretty darn good,” she laughed.

The Pork Chop Sandwiches stand is set up in the north side of the Casey's General Store parking lot in Blooming Prairie off Highway 218.

News
spotlight
New downtown boutique opens up despite fear of the unknown
By ANNIE GRANLUND agranlund@owatonna.com

Jodi Jendrysik admits that she’s afraid about opening a new business amidst a global pandemic, but she feels that pushing forward with her new downtown Owatonna business, Lilly and Rose Boutique, was the right thing to do. The boutique is located at 120 S Oak Ave. (Annie Granlund/People’s Press)

While 2020 has been a difficult year for business, one local woman decided to take the leap and open up shop in downtown Owatonna.

“Who in their right mind would ever think of opening a business during all this craziness,” said Jodi Jendrysik, owner of the newly opened Lilly and Rose Boutique on Oak Avenue. “Honestly, I’m scared to death, but I also think that this is about pushing forward.”

Though the boutique is new to Owatonna, Jendrysik successfully ran the store in Pelican Rapids, Minnesota, for two years. When her husband was relocated to Steele County to help open up Rise Modular in Owatonna’s industrial park, Jendrysik closed up shop.

“We moved down Halloween weekend, and I knew I wanted to wait until the first of the year before potentially looking for a spot to open back up,” Jendrysik said, adding that her flare for unique fashion and desire to bring trendy clothes to professional women over 40 is what originally ignited the birth of the boutique. “We found this space and just decided to step out into faith.”

Prior to the COVID-19 pandemic picking up in Minnesota, Jendrysik signed a lease agreement to move into the former military recruitment space at 120 S Oak Ave. Jendrysik said that original intention was to take over the space in March, but the state shutdowns revolving around the pandemic put everything to a halt. Once the recruiters were able to move into their new space, however, Jendrysik said the only option in her mind was to continue on with the journey.

“We just kind of felt like we needed to keep pursuing it and moving forward and keep our fingers crossed and hope and pray that everything would bypass and we could open up,” Jendrysik said. “We spent most of the whole COVID lockdown time reconstructing, redoing and renovating the building.”

Jendrysik was able to officially open June 6 and said that she immediately felt that other women were feeling as she did during the stay-at-home order: claustrophobic and a little stir-crazy.

“Everyone that has come into the store has been so welcoming and friendly, it’s been a good reaction and vibe that way, but it also made me realize that people were feeling the same way as me about needing to get out and communicate with one another even amidst all the craziness,” Jendrysik said. “Really we all had two options: we could either sit here and be afraid and not do anything, or we could push through it and do everything we can to kind of figure out what the new normal is going to look like and learn how to live with it.”

After the first two weeks as an official downtown Owatonna business, Jendrysik said that she looks forward to the adventure in her new town that she’s already come to love. She said that being able to provide women with a safe place to not only shop, but socialize in, has reassured her that she made the right – albeit scary – decision.

“This isn’t just about clothes,” Jendrysik said. “It’s about talking with and being around other women, which is why I am glad we pushed forward and opened our doors.”

Online: LillyAndRoseBoutique.com and Lily and Rose Boutique on Facebook

Minnesota Gov. Tim Walz, center, takes a walking tour of some of the artworks commissioned by Springboard for the Arts along University Avenue in St. Paul, Minn., Monday, June 8, 2020. (Glen Stubbe/Star Tribune via AP, Pool)

MINNEAPOLIS (AP) — Gov. Tim Walz has challenged Republican lawmakers to approve a Democratic-backed package of police accountability bills crafted following George Floyd’s death so he can have the “poetic justice” of signing them Friday to celebrate Juneteenth, which marks the end of slavery in the country.

The Minnesota Senate’s GOP majority passed a limited set of measures early Wednesday that the Democratic governor dismissed as “weak sauce.” He said at a news conference Thursday that he would consider this week’s special session “a total failure” if lawmakers don’t pass the policing overhaul as well as relief for neighborhoods damaged during the unrest that followed Floyd’s death on May 25.

Leaders of the House Democratic majority scheduled a series of votes for Thursday night to pass their policing measures. But Republican Senate Majority Leader Paul Gazelka said he still intends to adjourn Friday night, regardless of whether the two chambers have reached any agreement. The partisan split in Minnesota mirrors the divide in Congress over policing reform.

“If destiny and history is not raining down on Minnesota today and tomorrow, I don’t know what is,” Walz said. “The image of us and the Senate walking away from systemic change on Juneteenth adds to the legacy of what the rest of the world is looking at here. It is unacceptable. ... And the poetic justice and the decency of being able to sign those bills on Juneteenth to make a change in this state is pretty obvious.”

Gazelka told reporters the governor’s comments shocked him. He said Republicans have focused on policing ideas that both sides can support instead of proposals that won’t pass, and that most Minnesotans support their local police, with exceptions in Minneapolis.

He said negotiations were continuing.

The Republican leader said Minnesotans are upset about the “lawlessness” during some protests over Floyd’s death and Walz’s slow response, and for allowing protesters to tear down a Christopher Columbus statue on the Capitol grounds.

The People of Color and Indigenous Caucus developed the Democratic package, and caucus members joined the governor in complaining that their community was shut out of the process of drafting the Senate’s legislation. Walz said three of his cabinet members were given only three minutes each to testify at a committee hearing.

“We are in a moment in time here in Minnesota to do the right thing, to hear the voices of the people — black people, indigenous people, Asian people, Latino people, brown and black people from across the world, and white people,” she said. “This is not a black issue. This is not a people of color issue. This is a world issue.”

The 22 House proposals are wrapped into three bills on the themes of “Reclaiming Community Oversight,” “Reforming Accountability” and “Reimagining Public Safety.” It includes several proposals that Republicans have ruled out, including having the state attorney general prosecute all police-involved deaths and restoring voting rights for felons.

The Senate package consists of five modest proposals that partially overlap some House proposals, including banning the use of chokeholds and neck restraints, mandating a duty for officers to intervene and report when they witness another officer using excessive force, and providing help for officers recovering from traumatic events. 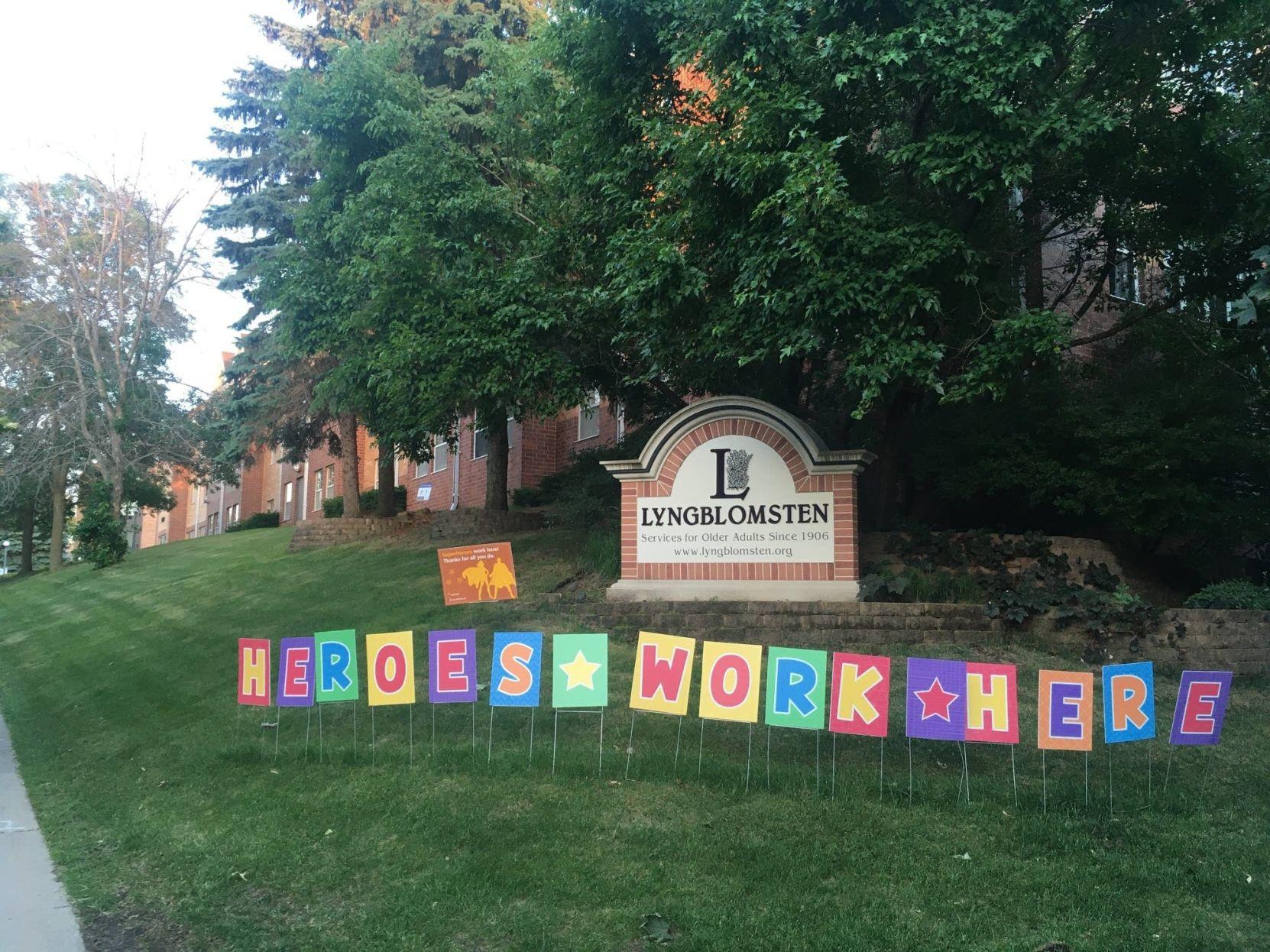 The Lyngblomsten Care Center in St. Paul has followed guidelines in fighting COVID-19, but saw more than 80 cases among residents and more than 50 cases with staff. The nursing home has seen cases decline since facility-wide testing began in mid-May, giving them a better picture of asymptomatic spread. (Peter Cox | MPR News)