One year ago, the city of Owatonna did not have a single inclusive playground throughout its 35-park system.

After a special ribbon cutting Wednesday, that number is now two. 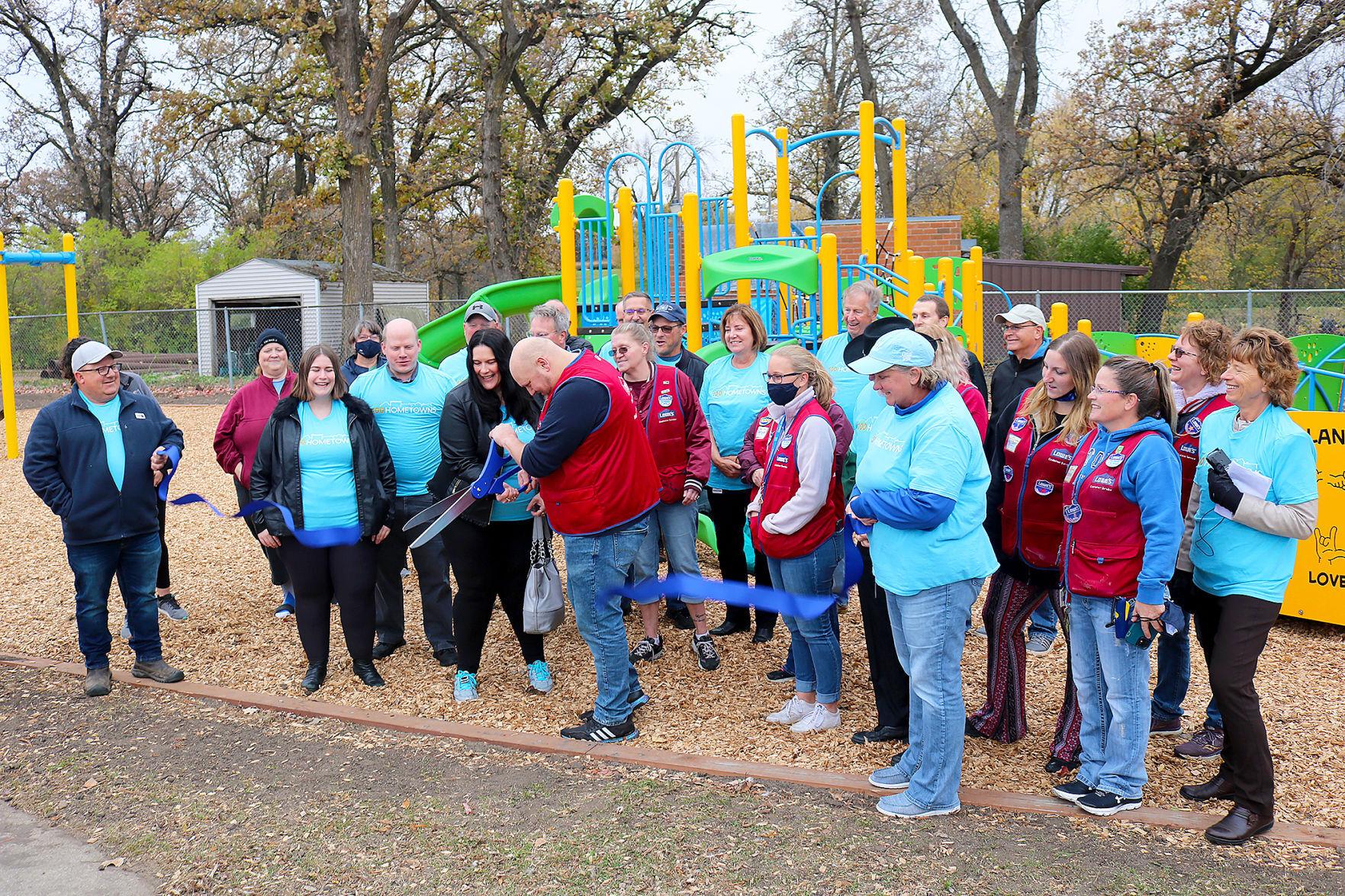 Lowe’s Assistant Store Manager Matt McLaughlin and members of the Bauer family cut the ribbon on the new play area Wednesday afternoon at Lake Kohlmier. The project, which was completed in a tight timeframe, was made possible through a $100,000 grant from Lowe’s, a private memorial donation from the Bauer family and $3,000 from Steele County. (Annie Granlund/southernminn.com) 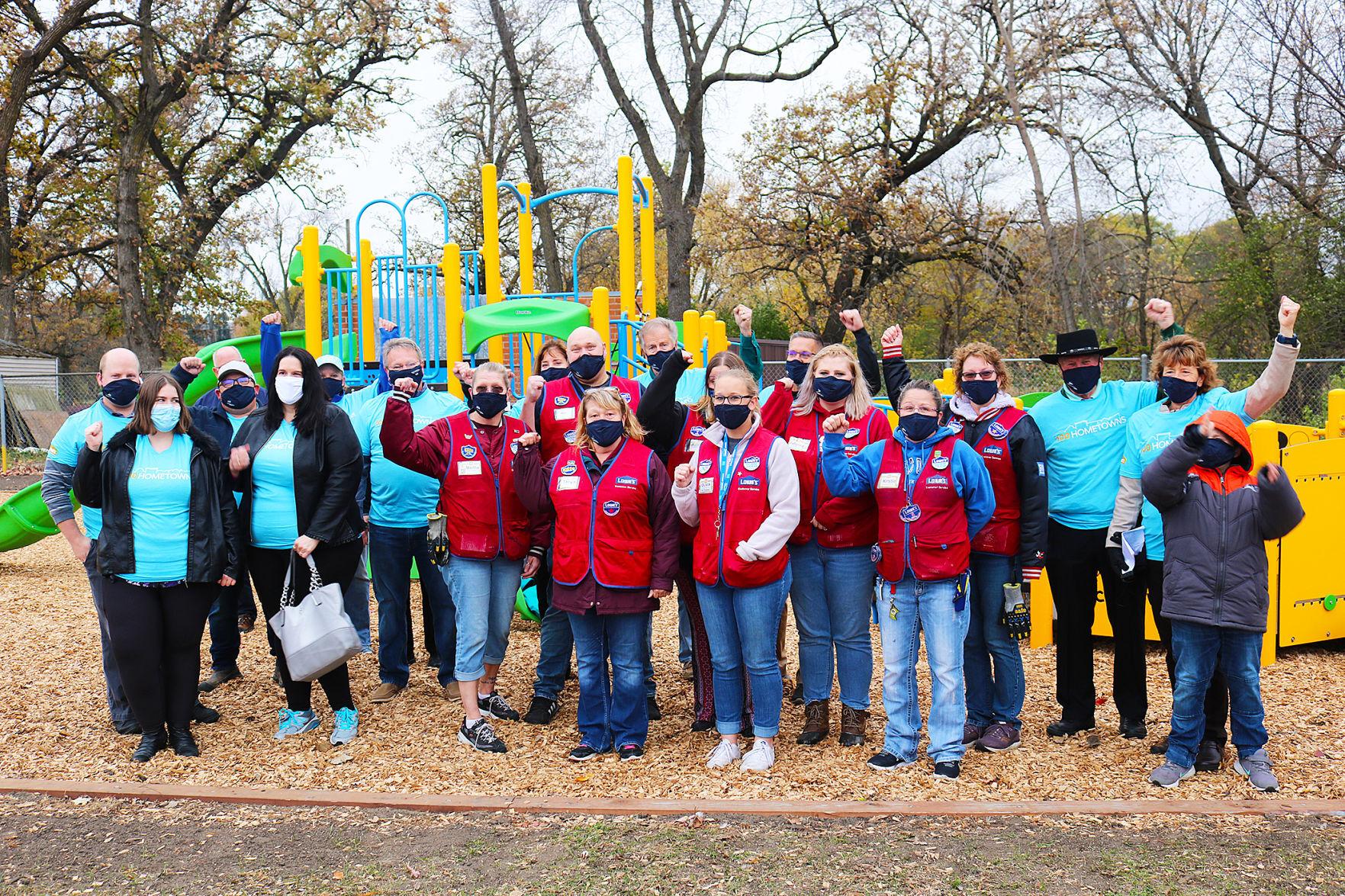 Members of the Owatonna City Council, Parks and Recreation Department and staff members of the local Lowe’s store celebrated the impressive turnaround of the project along the shores of Lake Kohlmier. Thanks to a $100,000 grant from the Lowe’s 100 Hometowns program, the 35-year-old playground next to the beach received a complete upgrade, allowing children of all abilities to play together.

“Not only is this a playground, but it’s an inclusive playground,” said Councilor Kevin Raney. “It’s going to reach every person in our community, and that’s an exciting thing. It was great to get the grant, but to also make it inclusive … that’s another win for the community.”

The inclusive playground structure, which replaced Owatonna’s oldest playground, is the second of two inclusive playgrounds within Owatonna. The We All Play Inclusive Playground and Miracle Field, a grassroots effort that began in 2017, officially opened to the public in July at Manthey Park with a huge community celebration and inaugural baseball game on the miracle field.

One week later, the city was notified they had been selected as a part of the special Lowe’s program — the only project in Minnesota to receive part of the $10 million commitment the company made to give back to the communities Lowe’s serves.

“It’s easy in the corporate world to forget about the people in their communities, but obviously Lowe’s stepped up in a great way by providing this,” Raney said.

The old structure at Lake Kohlmier had limited features and was not ADA accessible, which the city detailed extensively in their project proposal when applying for the Lowe’s program. The area now has not only the new playground equipment, but updated fall protection, new sidewalks and updated amenities, including accessible picnic tables and grill, a fountain and walkways.

“The new play area equipment and park amenities at Lake Kohlmier Beach are designed to create an inviting, fun and positive park experience for families,” said Jenna Tuma, director of Parks and Recreation.

Aside from the grant money, funds from Steele County and a private memorial donation honoring Alex and Levi (Steward) Bauer made the project possible. The memorial funds from the Bauer family specifically helped provide three ADA picnic tables, one ADA grill for the park and an ADA water fountain with an included “doggy drinker.”

Because of the project needed to be completed by the end of October, and the playground equipment was not scheduled to arrive until the beginning of the month, the time frame for a sizable project was considerably tight. To complete the project, several Lowe’s employees from the local store worked alongside parks and rec staff to remove the old playground equipment. 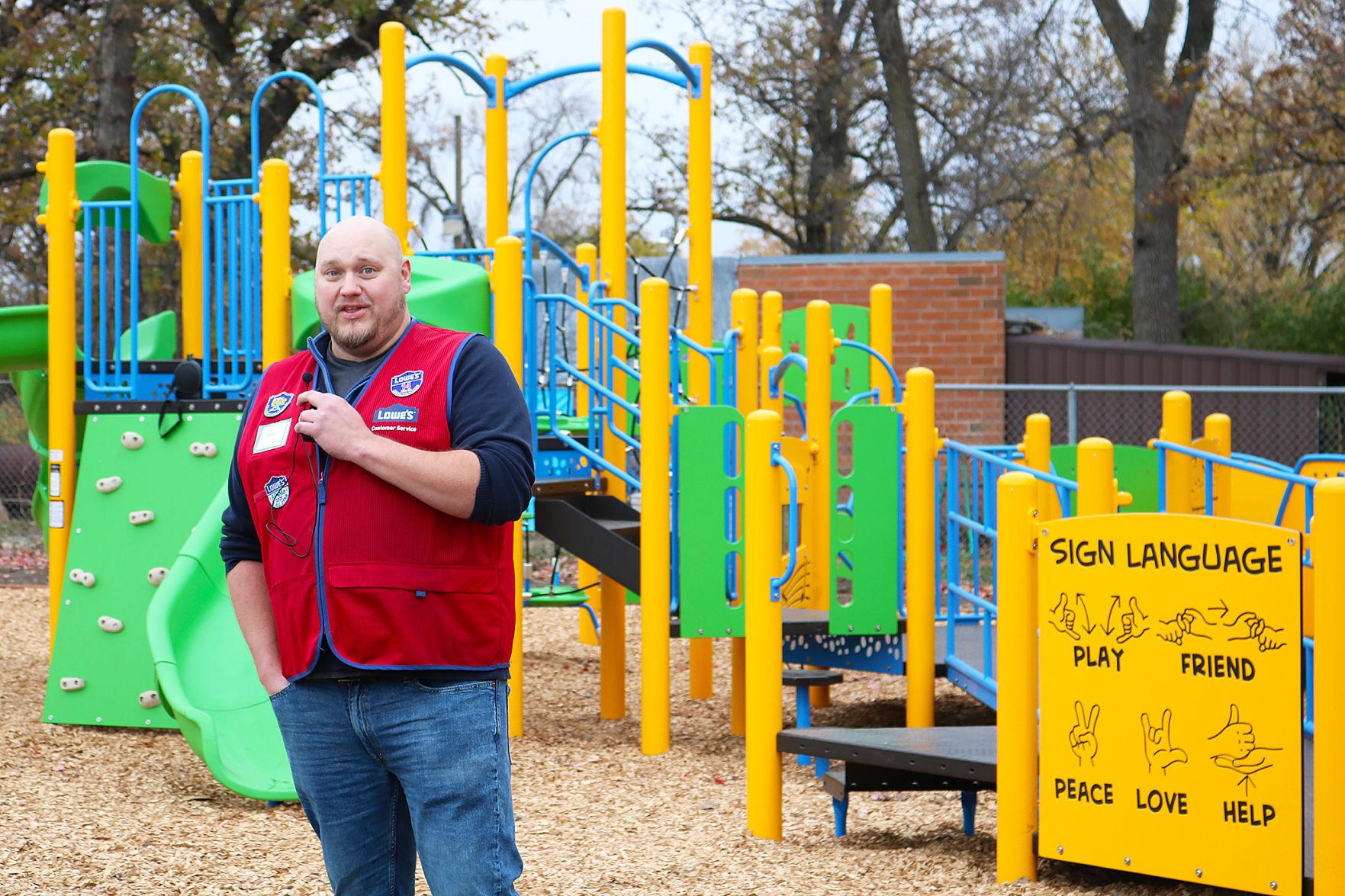 Lowe’s Assistant Store Manager Matt McLaughlin says being a part of building the community and making memories for years to come is what Lowe’s strives to be in Owatonna. (Annie Granlund/southernminn.com)

“This project in particular means a lot to me because when I was a kid I got to be a part of building a new playground in my own community on the Iron Range,” said Matt McLaughlin, assistant store manager of the Owatonna Lowe’s. “That park meant so much to me, I grew up with it and have so lots of fond memories … having kids make memories here for many, many years to come is really an awesome thing.”

“I know we are a big box retailer and the money came from the corporation, but we’re really glad we got a chance to be involved here and build something here in Owatonna,” he continued. “We are a big box, but we like to be a hometown store and help build our community.” 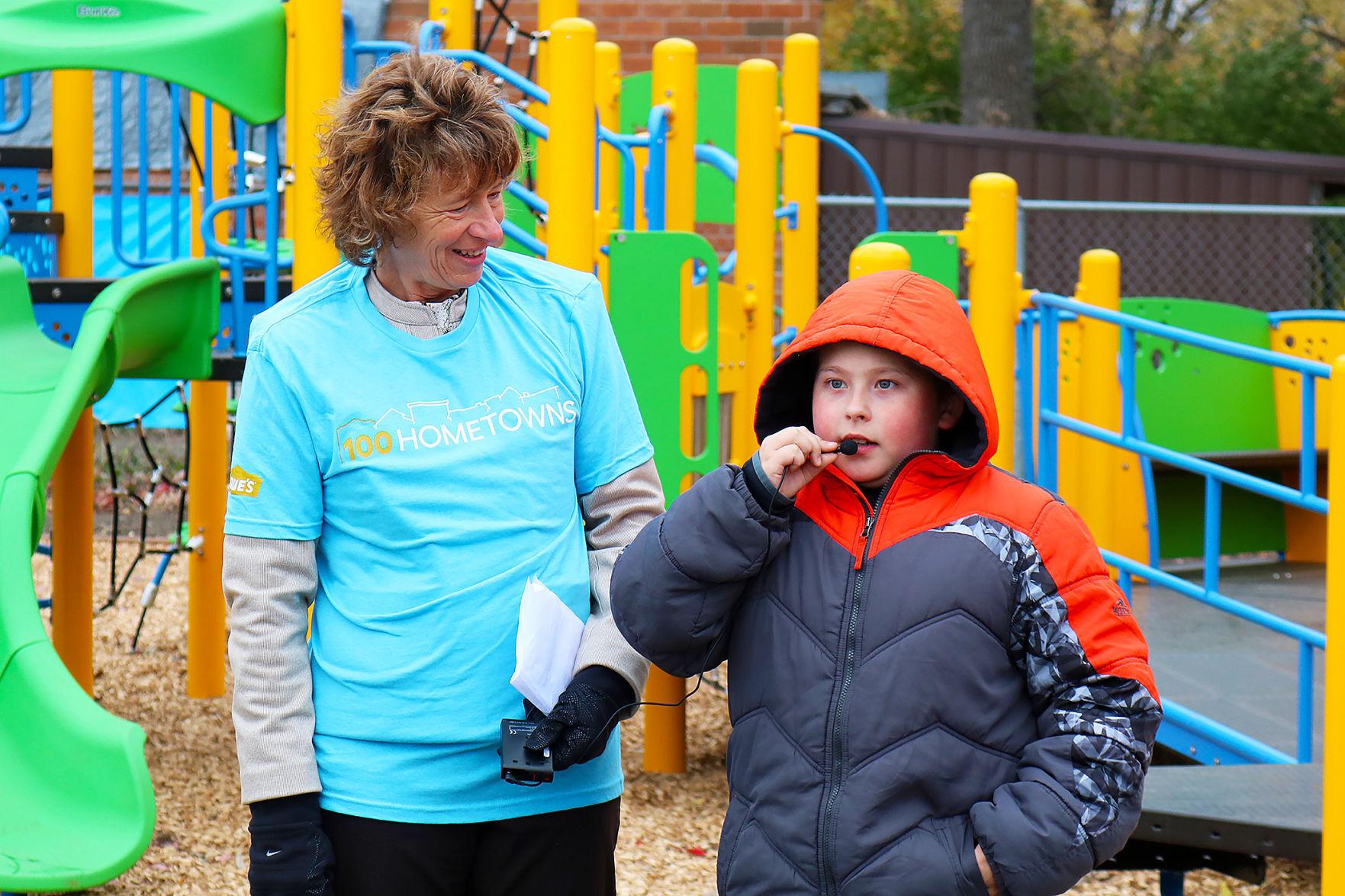 Surprise guest of the event was 10-year-old Verlin Gilbertson, of Ellendale, who showered the city and Lowe’s with gratitude in providing another place for him to have unorganized, pure fun.

“I’m so happy that I get to play here,” Gilbertson said.

Owatonna Public Schools continues to get a helping hand from the community.

During the Owatonna School Board meeting Monday, several gifts were accepted. Among them was a $10,000 donation from Home Federal Savings Bank to go toward the new high school. 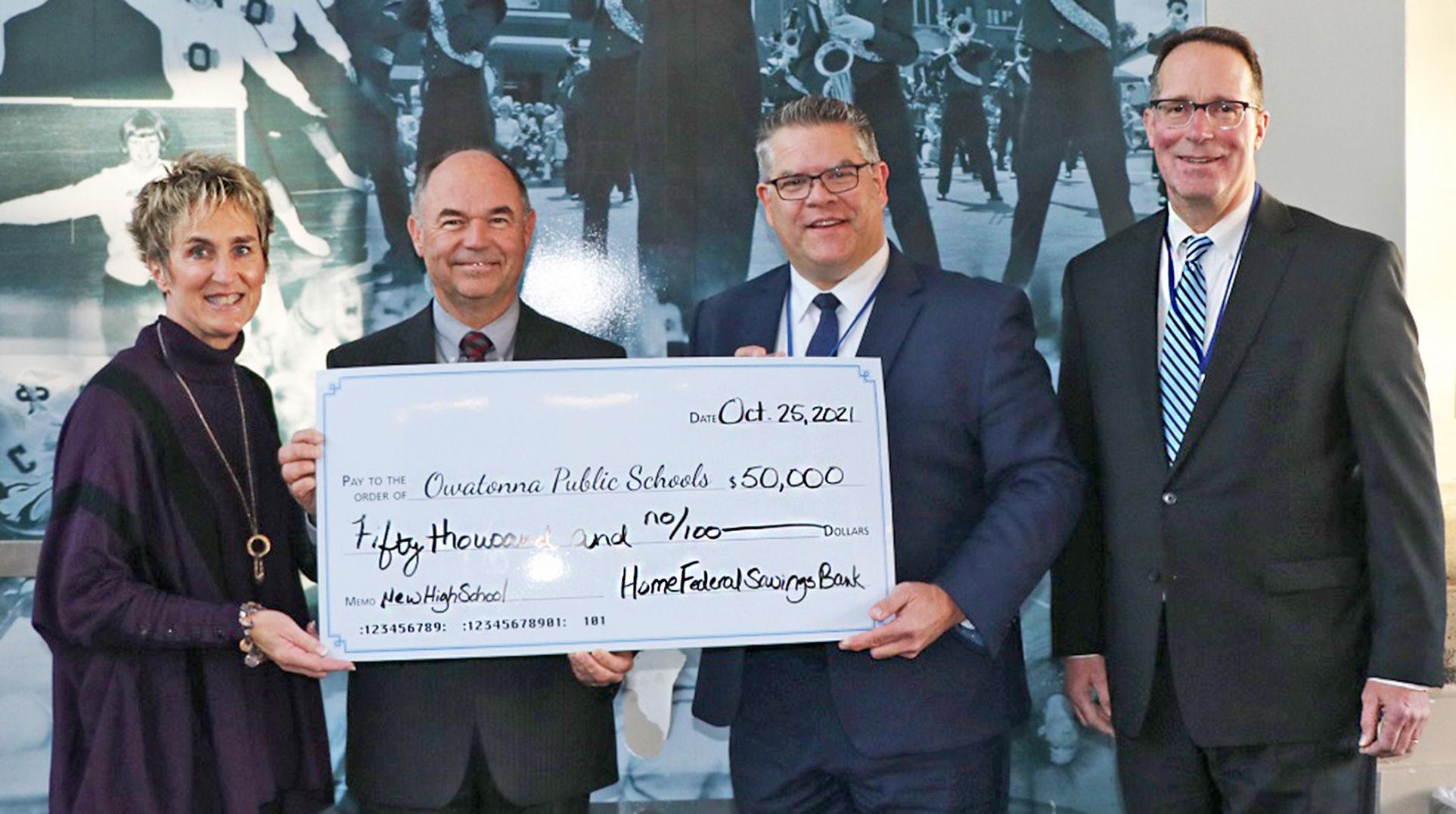 “We are committed to giving back to our communities and are proud to support the Owatonna Public Schools. The education of our young people and preparing them for their future will help ensure the continued success of Owatonna and its businesses,” said Brad Vettrus, Market President, Home Federal Savings Bank.

The donation received Monday is the first of five $10,000 installments over five years for the new high school. An in kind gift of ATM machines was given by the bank as well.

“We continue to be thankful for the generosity of our local businesses and continue to be amazed by the pride felt by all who live and work within our community,” Elstad said.

This is not the first large donation from a local business the district has received for the new high school. In December 2019, the board approved a motion accepting $20 million from Federated Insurance and a donation of land from the Rypka family.

The ISD 761 Foundation and Owatonna Foundation each donated $250,000 to Owatonna Public Schools to construct a large community room within the new high school. Cybex/Life Fitness has offered support for the weight and fitness room. Several other businesses throughout the community have offered generous financial and in-kind donations and gifts.

Owatonna Area Chamber of Commerce and Tourism President Brad Meier believes that many businesses throughout Owatonna are rallying in support of the new high school, because they understand how important the school system is to the growth of the community, and they want to be part of it.

“It’s a legacy into the future, and part of the ongoing success of the community is education,” Meier said. “Success and growth in the community means success for the businesses, and by contributing to education, they’re able to be a part of that in a meaningful way.”

Construction of the new 317,000-square-foot high school began in May of this year. The project is estimated for completion in summer 2023. 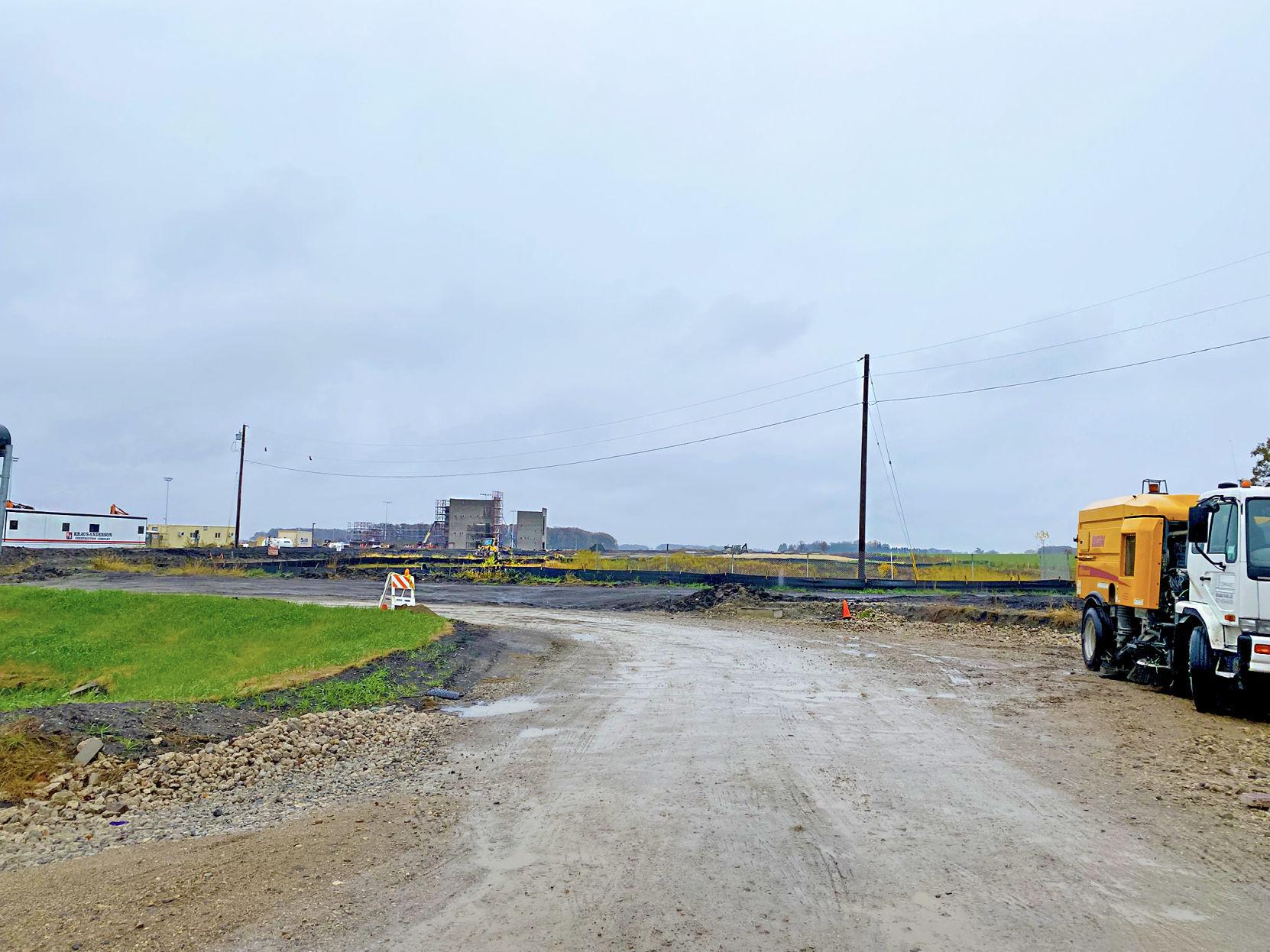 Construction is now beginning above ground at the site for the new Owatonna High School. (Emily Kahnke/southerminn.com)

According to the district’s project update site, several projects are done and many are currently in progress. Lights have been installed at the athletic field, staging pads and access roads have been constructed, water main has been installed through the site and building, and foundations have been laid for the three-story classroom.

Foundations for the gymnasium and exterior storage buildings have begun. Above ground masonry at the stair towers is also underway with electrical rough-ins within the masonry walls. Site utilities, such as a storm and sanitary sewer, are in progress as well.

Dugout foundations, athletic fields, sand aggregates, locker rooms, the wrestling room and storm shelter are among some of the athletic projects upcoming in the next month.

All updates on the construction project, as well as drone footage, photos and renderings can be found on the district website — go to isd761.org and click on the “New High School” tab at the top of the page.

An Owatonna man has been sentenced to probation after he turned himself in for sexually assaulting a woman in 2020 while she was asleep.

According to the criminal complaint, Seha turned himself in to the Owatonna Police Department in April, stating he had sexually assaulted a female approximately one year earlier. The following day, police interviewed the victim who confirmed the assaults happened about a year ago and that Seha kept trying to apologize to her.

Seha said the incidents where he assaulted the victim occured when the victim was asleep, but that she would wake up and tell him to stop.

As a part of his probation, Seha is prohibited from using alcohol or mood-altering chemicals without a prescription and must undergo a chemical dependency evaluation and treatment. He is also prohibited from entering bars or liquor stores and cannot contact the victim. Seha must also attend a sex offender program and cannot access or use the Internet without approval from his probation officer.

An inmate at the Steele County Detention Center was sentenced to three additional months in jail for damaging a jail cell in 2020.

According to the criminal complaint, Haakenson broke the sink in his jail cell in July 2020 and was throwing the broken pieces at the window. Both the windows in the cell were cracked and the sink was broken to the point that it was almost completely off the wall.

The cost of repairing the cell windows was estimated at $2,925. Court records show no documentation of the cost to repair the sink.

Haakenson is ordered to pay the cost of the repairs for the cell windows as restitution.

Haakenson was in jail at the time of the incident for a Dodge County case where he was charged with multiple felonies and misdemeanors. He was sentenced on Wednesday to five years in state prison after pleading guilty to possession of a firearm or ammunition well registered as a felon. All other charges were dropped per the plea agreement. He will serve his time at the state prison in St. Cloud.