Ultra Outlets of Minnesota, located off Interstate 35 in Medford, was once the location of 54 retailers. Today, stretches of six to seven suites remain vacant as retailers throughout the country struggle through the COVID-19 pandemic. In a push to fill suites, the outlet mall will welcome a church as a new, albeit nontraditional, tenant. (Annie Granlund/southernminn.com)

Originally built to house 54 retailers, the Ultra Outlets of Minnesota has started to get creative to fill the continually vacant suites.

Over the last year, the Medford outlet mall which sits just off Interstate 25, has brought in a zoo and a beauty salon, two nontraditional options for shopping centers. After a zoning change was approved by the Medford City Council during a special meeting Wednesday, the NewLife Community Church will take residency in the suite that was the former home to Gap.

The church will have a lease for up to two years as they transition out of the Owatonna High School and continue to work on building a church somewhere in the Owatonna area.

“The whole outlet model when we took over the center was still cranking along and in great shape – it just recently started going south,” said John Coons, a partner with Ultra Outlets, an Ohio-based company that purchased the outlet mall in 2016 for $2.3 million. “We’re staying positive about it, though, and we have plenty of prospects coming in.”

Retail and entertainment establishments throughout the country have been drastically impacted by the ongoing COVID-19 pandemic between the mandated closures and consumer anxiety of returning to public. Last week, the Mall of America announced plans to lay off more than 200 people and potentially extend furloughs of up to 178 more in response to the crippled industry.

The Star Tribune reported Aug. 14 that Burnsville Center, also near the interstate, but in Dakota County, is in foreclosure. Its owner, CBL Properties, reported overall same-center net operating income declined 32% for the three months ended June 30.

According to the Star Tribune, “CBL Properties said in public financial filings earlier this year that Burnsville Center had experienced a decline in income due to store closures and rent reductions.”

Over the last year, the outlet mall in Medford has also said farewell to a number of tenants, including the most recently departed Nike Outlet Store earlier this year and Dressbarn prior to that.

The mall now houses only 15 businesses, excluding the upcoming church.

Despite what appears to be a half-vacant mall, Coons said that things still look promising for the small center as they work their way through the pandemic.

“Sales were trending very good before COVID, it’s just an unfortunate time,” Coons said. “Even before that, a lot of our retailers were leaving and closing up shop through no fault of our own. Their businesses had changed, and I can’t say what that is due to, but there was a lot of bankruptcy and entire chains going out of business.”

While Coons said it’s been a struggle seeing almost monthly turnovers, he said traffic is still steady in Medford and he is convinced they will make it out through the other side of COVID-19 “just as good as before we started.”

“There’s certainly more on the horizon,” Coons said in terms of creative uses for the vacant suites. “We are looking at bringing in some food, which is not a traditional use for outlet space. We have a section of the mall area that we’ve designated that would be good for fast food or maybe another restaurant with a drive-thru or even sit-down restaurants. COVID has slowed down the leasing side of things, but the outlook is still good.”

Ultra Outlets of Minnesota is a 223,660-square-foot shopping center that first opened in 1991 as the Medford Outlet Center.

Anyone interested in leasing a suite at Ultra Outlets of Minnesota may contact Property Representative Simone Hellevik at 507-455-2042 or via email at shellevik@ufpm.net.

Though the final Thursday night car show of the summer at the Owatonna Eagles Club wrapped up last week, another car show will be coming on Sept. 26 as a way to raise funds in place of the 2021 Cancer Auction. (Annie Granlund/People’s Press)

Over the last several years, the Owatonna Eagles Club has helped raise more than $250,000 for cancer research in Minnesota. With the ongoing COVID-19 pandemic leaving its 2021 Cancer Auction — typically held in February — up in the air, the nonprofit has looked for alternative ways to continue to raise funds for worthy causes.

“It’s not looking like there will be a Cancer Auction this year, so we decided to use all the money raised at our Thursday car shows will go toward cancer research,” said Chris Behne, a trustee with the Owatonna Eagles. “We usually raise about $60,000 at that event, so we have been trying to find other ways to make some of that money.”

That’s where Lanny Louks and his passion for classic cars came in. Louks, who is a regular at the Thursday car shows, offered to organize a Saturday show later this month and give 100% of the proceeds go to the Eagles Cancer Foundation — a cause he believes in.

“Cancer is just a horrible disease,” Louks said, adding he has had friends and family who have fallen victim to cancer. “The more money people put into researching it to try to find a cure, the better.”

The car show on Sept. 26 will be similar to the regular Thursday night car shows, which ended last week, though the major difference — aside from the day — will be a charge for car entries. Louks said this is to help raise additional funds for the foundation. Concessions will also be sold on site. Louks will provide trophies, dash plaques and door prizes for the cars that participate.

“By having it be outside, there will be plenty of room for social distancing so people don’t have to worry too much about the current situation in the world,” Louks said in reference to COVID-19.

Behne said the car show is a welcome addition to the Eagles this year as it continues to face uncertainty with its fundraising efforts.

“We donate about $100,000 every year to numerous causes, and a lot of that money usually comes from our charitable gambling,” Behne said. “That took a bit of a hit this year with COVID, but we are still trying to do what we can for the community.”

According to Behne, the mission of the Eagles is to show and provide general care for the community and all people. For that reason, he said people like Louks are allowing the organization to continue to be a pillar in the community.

“We’re trying our best to raise what we can and give back,” Behne said. “I don’t think we’ve had to turn anybody down that’s asked for donations yet, and we’re still trying to keep up with that.” 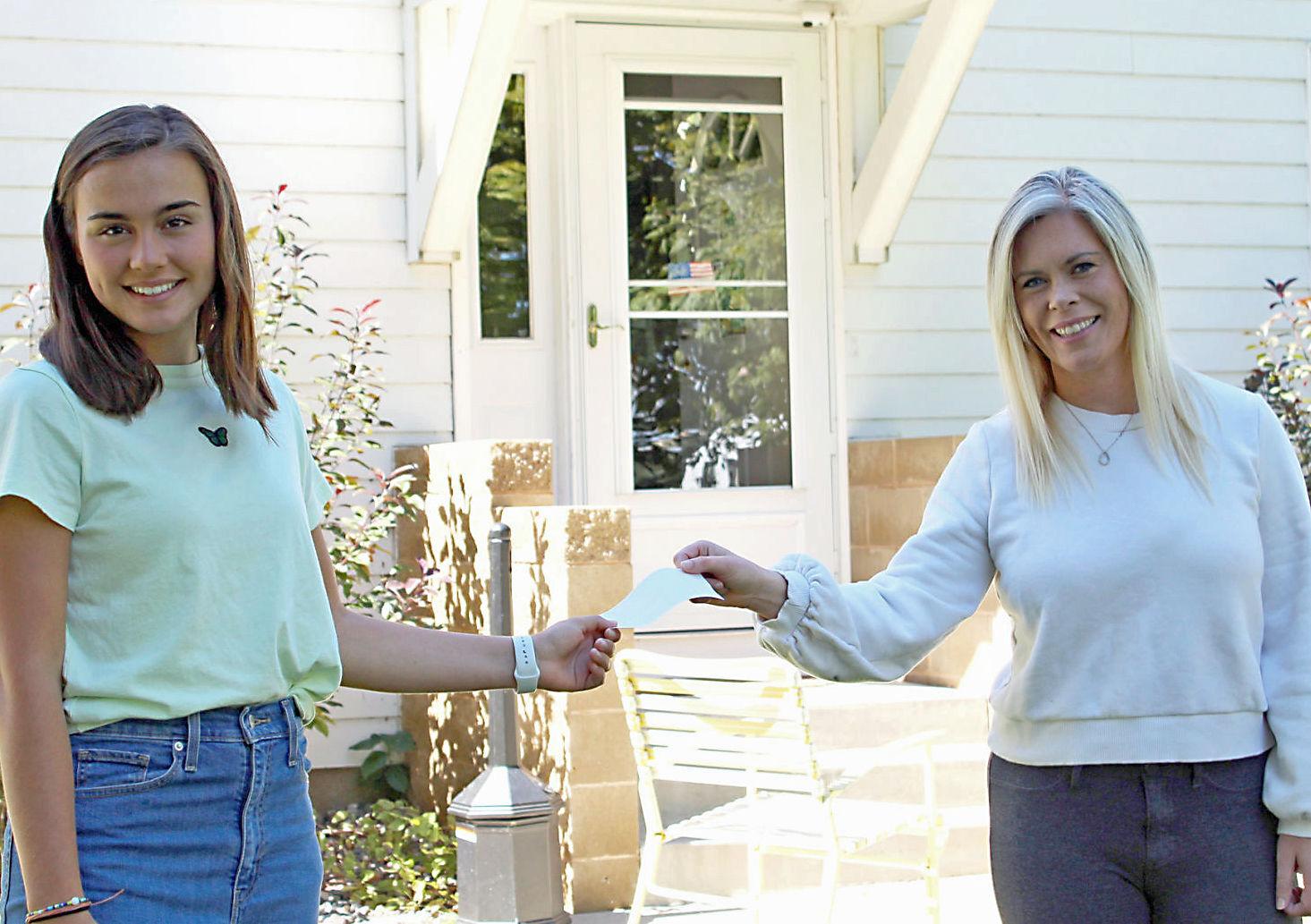 Kate Sande hands over a $350 check to Amanda Starks of Rachel’s Light. The money came from clothing Sande made and sold. (Ashley Rezachek/southernminn.com)