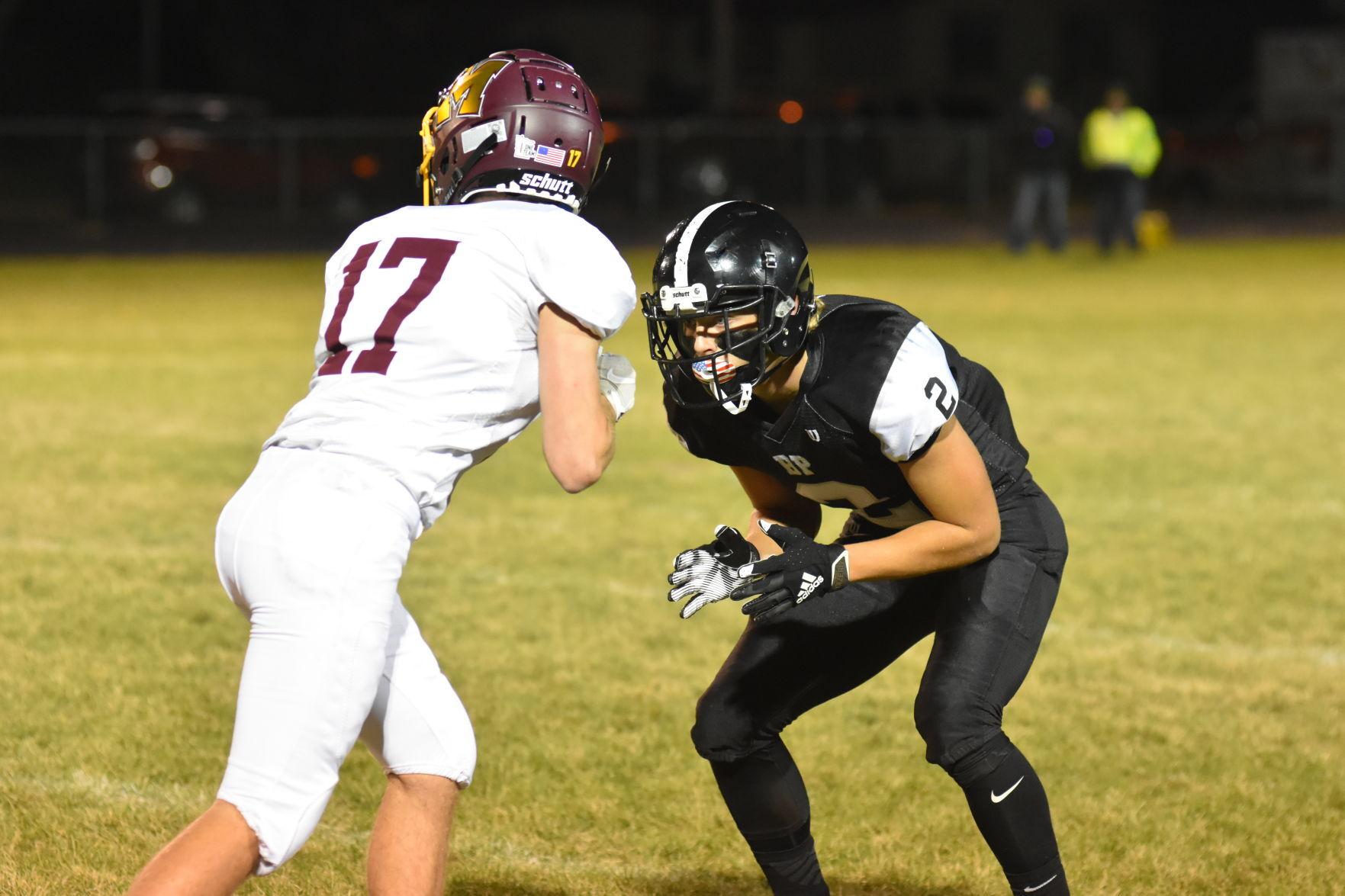 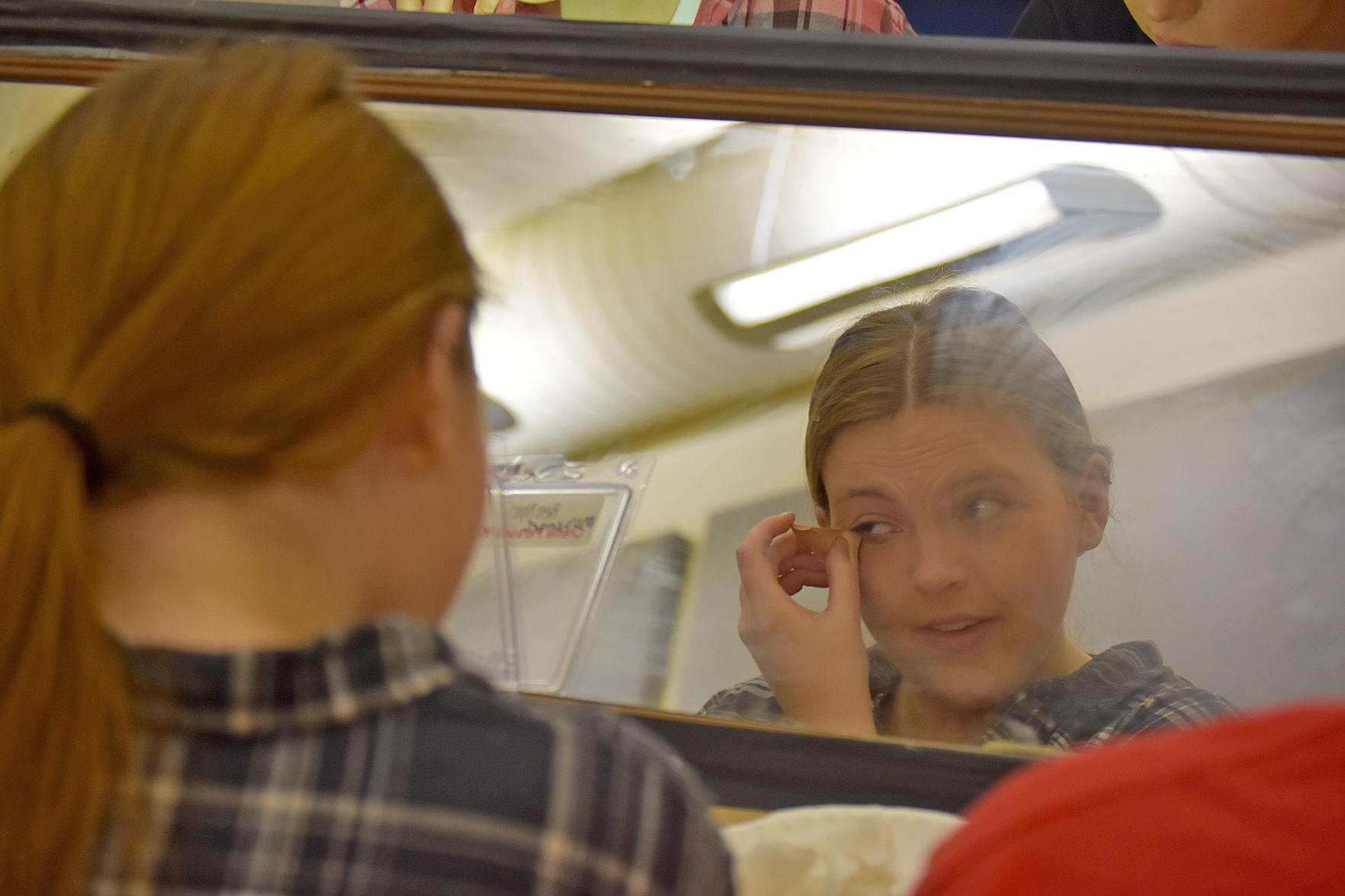 Owatonna Freshman Mackenzie Oltmans prepares for the “family night” dress rehearsal of ‘Arsenic and Old Lace’ on Wednesday. The fall play opens at the high school on Friday, the first in-person theater performance for the school in 18 months. Oltmans plays the role of Officer O’Hara. (Stephen McDaniel/southernminn.com)

Teller next to her new work titled “Horse Energy” . She said it bears a similarity to the piece that won her 3rd place in an international competition. (Emily Kahnke/southerminn.com)

“Nothingness Dragon” by Dee Teller. While ink drops do happen sometimes, Teller says the ones on this scroll were intentional. (File Photo/southernminn.com)

Last year was supposed to be an exciting milestone birthday celebration for local and world renowned artist, Dee Teller.

Unfortunately, due to some medical issues that resulted in open-heart surgery, the reception and 80th birthday party for Teller were canceled.

In a previous story, Teller mentioned her disappointment in not being able to attend her birthday bash, but she remained hopeful that a celebration would happen for her 81st birthday this year.

And this year, a celebration she will have.

Teller will be showing some new and old works she has created over the years for a one-day exhibition at the Owatonna Arts Center on Sunday, Oct. 31 from 1 — 5 p.m.

Locally, Teller is known as a beloved elementary school teacher for Owatonna, who taught in the district for nearly 30 years.

Her name has become known around the world for her masterful use of the Sumi-E brush painting technique. She is the only non-Asian artist honored in “An Album of Selected Paintings by the 20th Century Outstanding Chinese Artists.”

Teller was invited to compete in the 1992 international competition for China’s Ministry of Culture. She took home third place out of 6,000 Sumi-E brush painters.

She fell in love with the art form while attending a Sumi-E workshop in Duluth in 1986. The two instructors who came from Hangzhou, China immediately recognized Teller’s talent and invited her to study in China.

Teller was able to sell some of her scrolls and pieces through a sale at the Owatonna Arts Center. She also compiled investors to help fund her trip to China in 1987.

“Sixteen artists from all over the United States attended this six-week workshop in China,” Teller recalled. “Most of the students finished the workshop with five or six scrolls; I had 20.”

Teller has traveled back and forth to China several times and has trained under one of the world’s most famous horse painters named Lok Tok.

Despite the fact that Teller is now retired for some years, that hasn’t slowed her down. She continues to paint and teach.

“These paintings, the style and the horse-masters I studied under became a part of me,” Teller said. “I’ve had several gifted students over the years and I continue to love to share this art form.”

Teller hopes many in the public will attend her exhibition Sunday — and wish her a happy birthday, as the exhibit event takes place on her actual birthday. She will have prints of her work available, cupcakes and as she put it, free hugs. Costumes are encouraged, but not required. 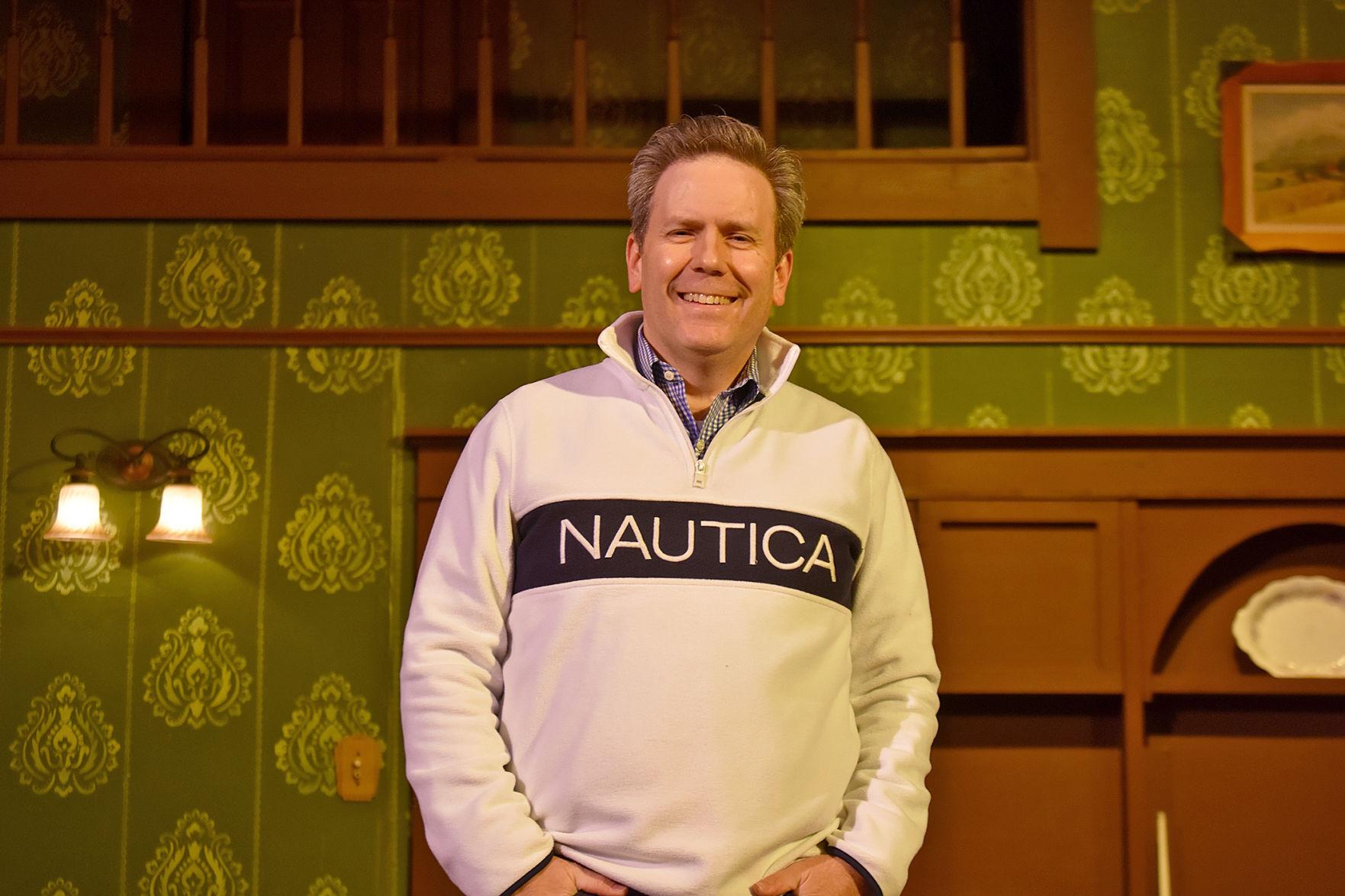 Eric Eitrheim, director of the Owatonna High School fall play, said the time and energy put in by the cast and crew of ‘Arsenic and Old Lace’ makes a classic murder-comedy show come to life. (Stephen McDaniel/southernminn.com)

There will be no holiday party to celebrate and recognize Steele County employees this year with the COVID-19 pandemic once again to blame.

Commissioners begrudgingly approved the motion, but not before airing their opinions on allowing the virus to continue to dictate life for much longer.

Human Resources Director Julie Johnson expressed to the Steele County Board of Commissioners during the Tuesday meeting that she, County Administrator Scott Golberg and Public Health Director Amy Caron felt it was the right decision to make in the best interest of the health and safety of county staff.

“Even though the [number of COVID-19 cases] in Steele County has stabilized and has gone down a hair recently, we are still recommending to not have the in-person event,” Johnson said. “We’re trying to balance having our employees well and healthy and not having entire departments unstaffed, because people may contract COVID or be exposed and have to quarantine.”

Johnson said the county has been hosting a combination employee recognition/holiday party for seven years, with the exception of the canceled event in 2020 also due to COVID. In previous years, Johnson said roughly 100-115 employees attended the event.

“We’re trying to align with our reopening plan that county meetings and events would have social distancing … we don’t know if we could socially distance in that kind of environment,” Johnson said. “Employees also won’t be masked, because they will be drinking and eating at this event.”

Following a survey of county staff, Johnson said 63% of those who responded indicated they would not attend an in-person holiday event at this time. Roughly 100 employees responded to the survey.

Though the commissioners unanimously agreed to cancel the event originally scheduled for Dec. 3, some wanted to make it known that eventually they would need to accept that COVID-19 is going to be a permanent part of life and decisions will need to be made to get back to “normal.”

“I can go to church on Sunday morning and worship with 200 people in pews and sing and do everything I need to do. I could go up to a Vikings game with 70,000 people in the stands, and as far as I know, in seven weeks the [Centers for Disease Control and Prevention] has not found anything with the NFL as far as ‘super spreaders’ … last Sunday, I could have went up to the Rolling Stones concert, which I understand was about 50,000 people at US Bank stadium with no masks, no nothing … it’s open,” said Commissioner Greg Krueger. “We’re going to have to make a decision one of these days that COVID is going to be with us forever and we’re going to have to learn how to deal with it.”

Krueger said, eventually, the county is going to have to completely reopen and “make it work,” adding he would like to see the county start thinking about these decisions now.

Commissioner Jim Abbe said he agreed with Krueger’s sentiments, adding that he would be at the holiday party himself, but that if the majority of employees are not comfortable with attending, then there is no point in having the event at this time.

However, he still believes the point of opening things up again is getting closer.

“Everybody is at a different point, and everybody has a different comfort level,” Abbe said.

Krueger reiterated that eventually everyone is going to have to “learn how to live with [COVID]” and start to move on.

In place of an in-person event last year, the county held a virtual event. Commissioners also went around to hand out certificates and gifts to the staff, which Johnson said employees expressed appreciation for. Johnson said, because of that positive feedback, she believes doing that again would be an appropriate alternative.

“We are as anxious as anyone to celebrate each other and be together in person,” Johnson said. “But we’re trying to take a cautious approach.”

Johnson will coordinate how the virtual event will look and prepare certificates and gifts for the commissioners to hand out to staff. 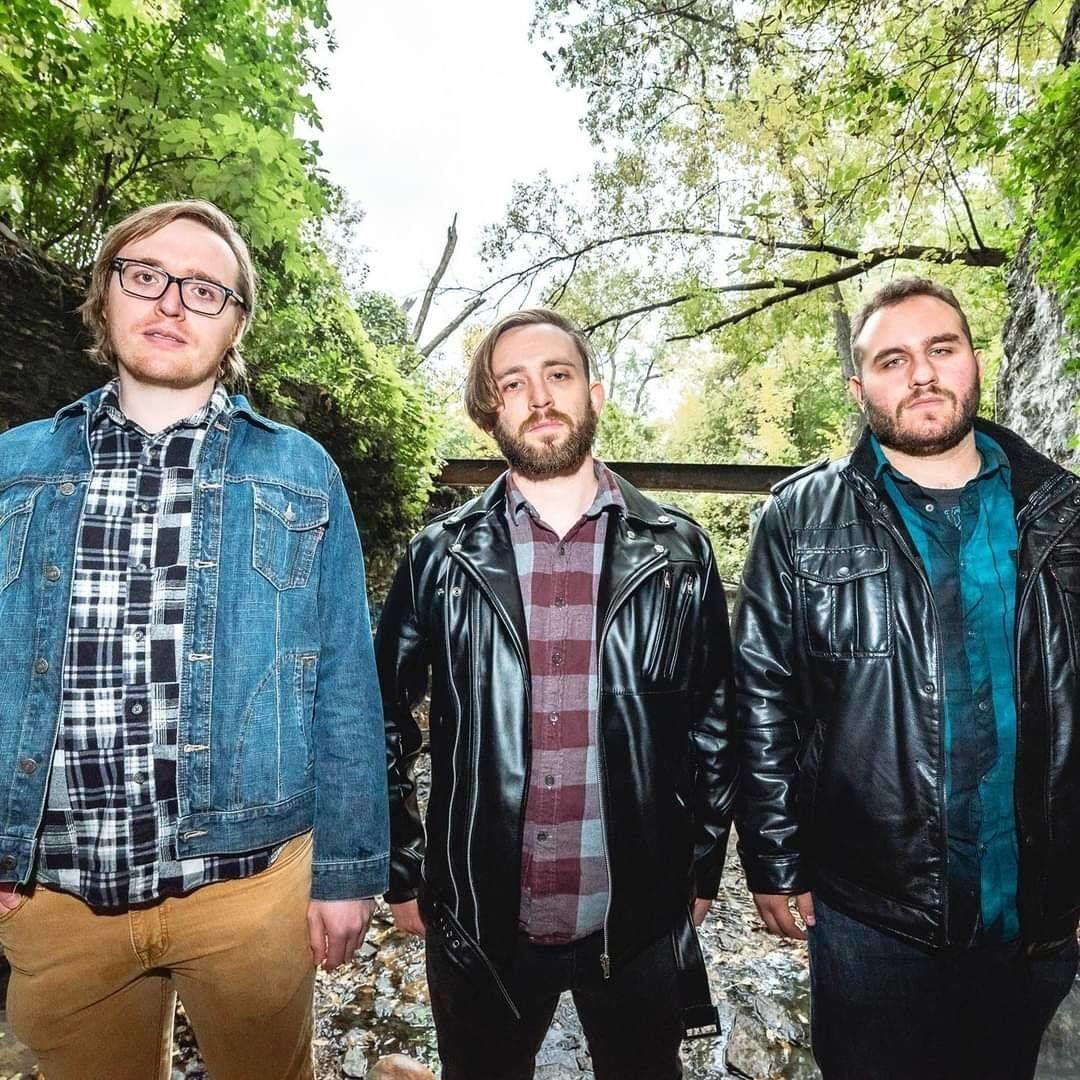