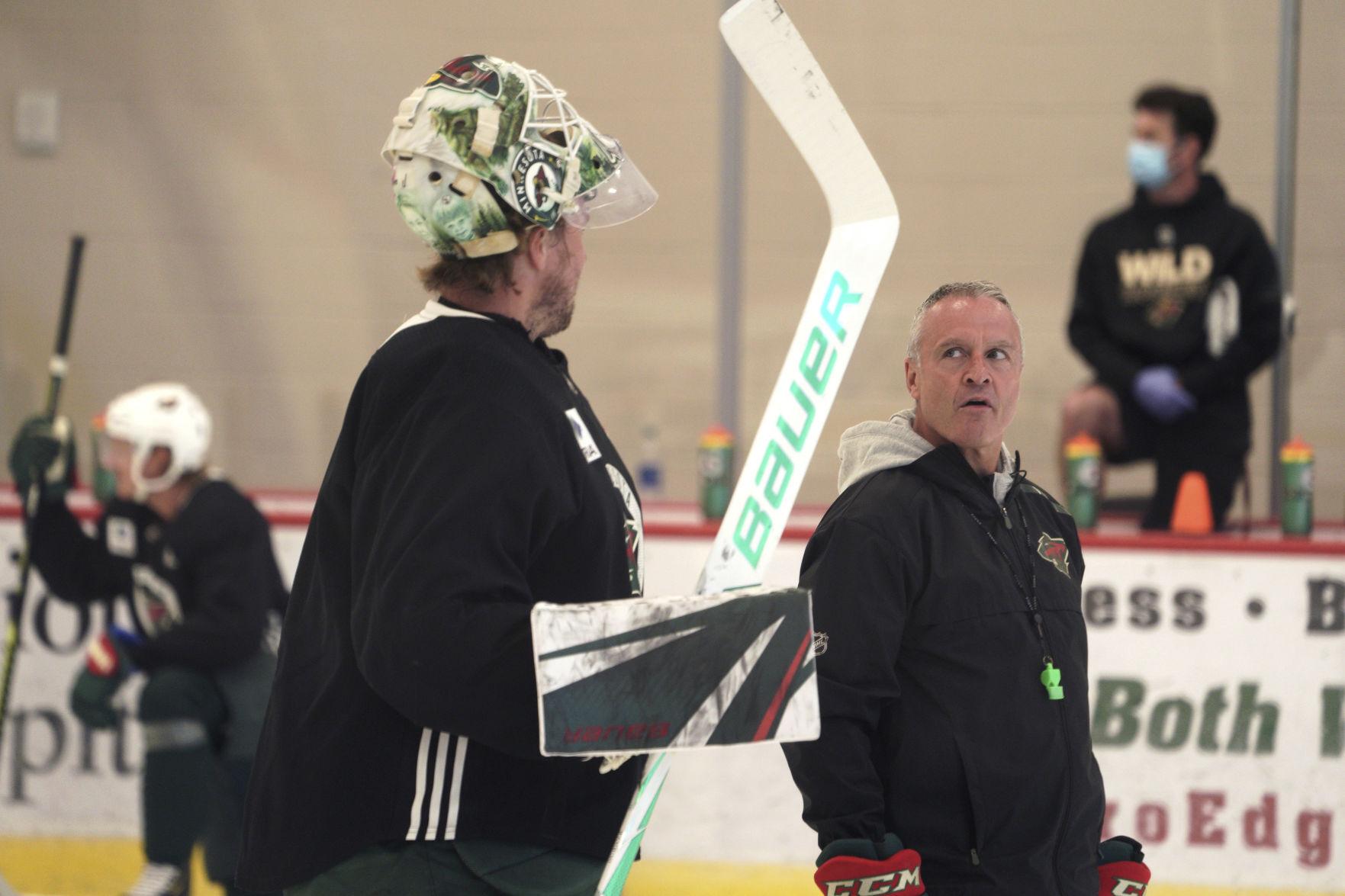 Minnesota Wild coach Dean Evason talks with goalie Devan Dubnyk before practice at the NHL hockey team’s training camp Monday, July 13, 2020, in St. Paul, Minn., after a break in the season because of the coronavirus pandemic. (Brian Peterson/Star Tribune via AP)

While many sports have been put on hold due to the coronavirus, the Owatonna Fishing Team has found a way to continue casting while remaining safe.

This year as the team prepares to hit the water, they will need to bring more than just their fishing pole and tackle. A cell phone has now become a critical fishing tool.

Reel LiveWell is a mobile app from Champions Tour allowing users to upload and deliver fishing results instantaneously. The team has begun its third season in the wake of the pandemic, and as a result they have been participating in virtual tournaments via the app.

The team draws in around 50 students from third grade to 12th grade from Owatonna and the surrounding areas. It includes students who are just starting to hone their fishing skills as well as those who have excelled. About 10 to 12 teams compete per tournament. A team typically consists of two people and a boat captain.

Owatonna Tackle Backers is a nonprofit organization set up this year to help fund some of the team’s expenses. The nonprofit helps pay for the various expenses including registration fees and paying boat captains.

“For us creating the Owatonna Tackle Backers is going to help kind of separate some of the finances with the school so that we will have a little more flexibility,” Lewis said.

According to Lewis the expenses can really add up, sometimes up to $500, to compete in a tournament.

Under normal circumstances the team usually participates in the B.A.S.S. (Bass Anglers Sportsman Society) and the RSATT (Rapala Student Angler Tournament Trial) tournaments. However, the B.A.S.S. was not feasible this year due to large crowds at the rules meeting, according to head coach Larry Kriesel.

They will continue to compete in the RSATT, which holds its rules meetings virtually. The tournament is a catch, photo and release tournament. To compete students take a photo of their fish using a timestamp mobile app. From there they can upload the photo and information to the Reel LiveWell app, then release the fish.

“I like that formula better, it’s easier on the fish,” Kriesel said. He says that he would rather not kill the fish if they do not have to. He also notes that keeping a fish alive on a hot day is a challenge. 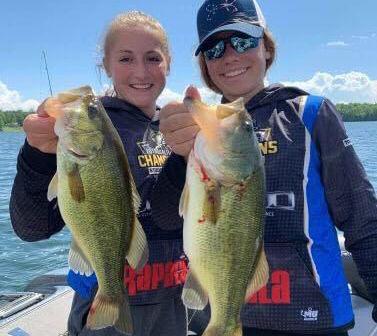 The team is set up through the Owatonna School District, but welcomes students from the surrounding area. Pictured is (Photo courtesy of Larry Kriesel)

Students who do well in this tournament can go on to regionals and even the national championships. Four Owatonna teams have already made the top 10% and have qualified for the tournament of champions.

Another advantage of this technology is that people on shore will be able to know how students are doing out on the water right away. With the app you can see what and when the anglers are catching as well as how many.

“It’s really slick and it’s kind of cool to get updates and just be able to track kids,” Lewis said.

“You can be back here in Owatonna and see how your child or grandchild is doing,” Kriesel added.

Typically the practice season begins in February with indoor meetings and casting practice. It finishes with the high school tournament in September. But as the virus spread across the world and social distancing restrictions were set in place the team had to get more creative with their practices.

“We couldn’t do a lot of practicing this year,” Kriesel said.

Anglers were encouraged to safely practice at a local river or lake in the meantime and virtual meetings through Zoom were held to explain how things were going to work. As restrictions have eased, the team has slowly been starting to practice together once again.

Following guidance from the school district, the team has begun to practice every other Wednesday. Coaches check temperatures and ask students standard COVID symptom questions as a precaution, according to Lewis and Kriesel.

The team will be participating in additional virtual tournaments that were designed as a result of COVID. The rules for these tournaments are more relaxed. Participants are allowed to fish wherever they want, however they want, in a boat, kayak or on shore and even with an adult.

“Those tournaments are a little bit different, but it’s a way to get the kids out there and fishing,” Kriesel said. These tournaments are an opportunity for students to fine tune their fishing skills, while also competing for trophies and a chance to win gift certificates for fishing equipment. So far the Owatonna team has participated in three of these tournaments.

“It just gives them a little taste of tournament fishing and how competitive it can be,” Kriesel said. 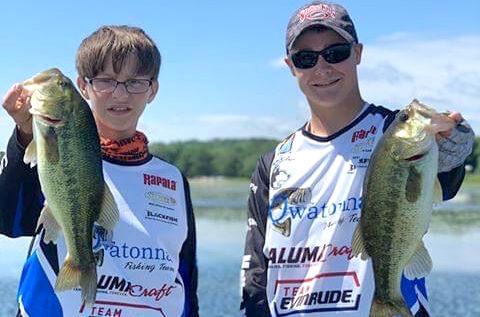 Like any other sport, students practice a number of soft skills when they are out on the water. Teamwork is an important skill as some students are paired with other students they do not know that well. With the varying skill levels students have to learn how to work together, practice patience and understanding.

Students are also learning fishing techniques, how to approach a lake and information on invasive species. During the regular year they also practice their public speaking skills during weigh-ins where they share how they caught the fish.

Many of these learned skills can be applied to other areas of life.

“The goal of the fishing team or the Tackle Backers is we are trying to just provide safety, fun and education,” Lewis said. 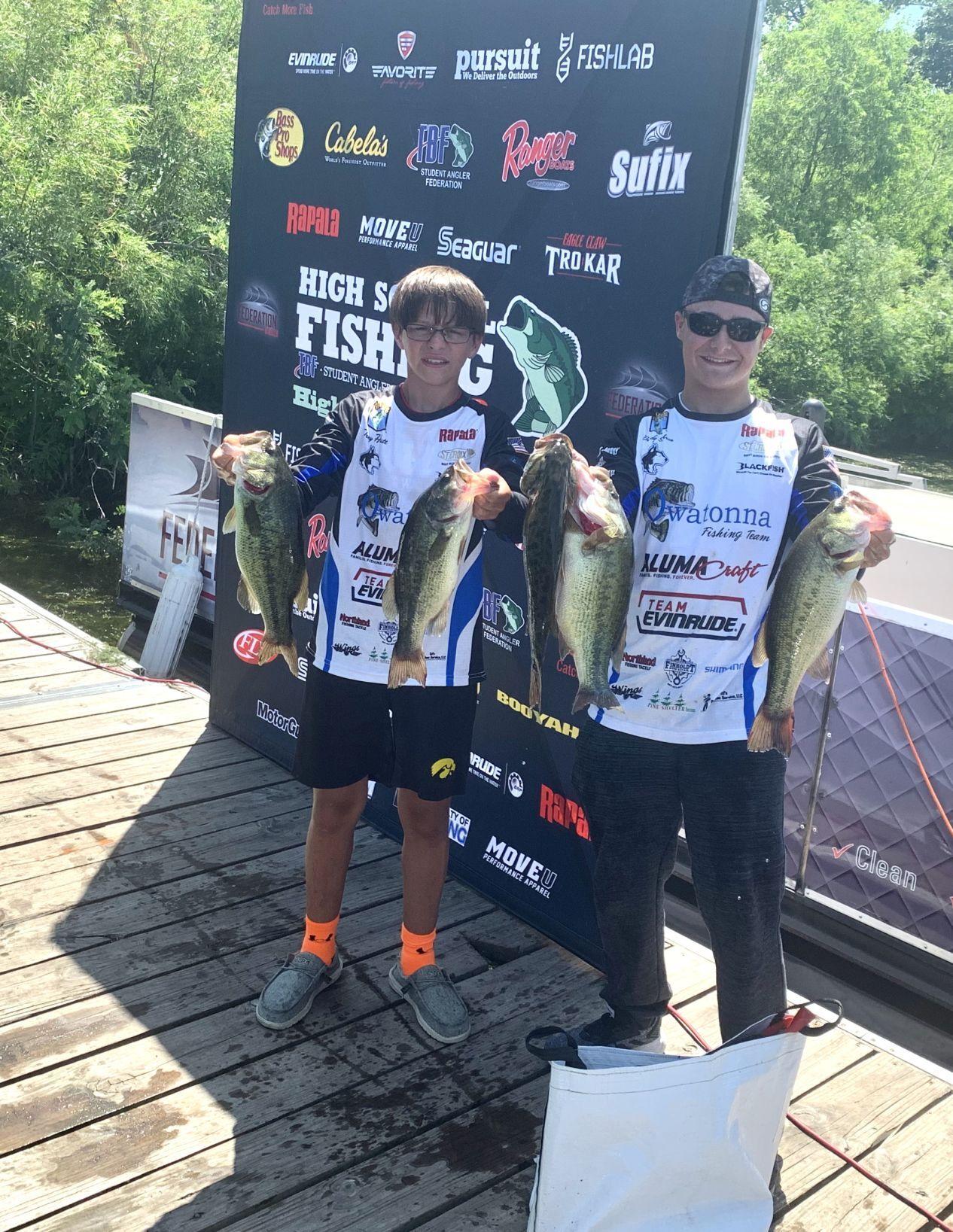 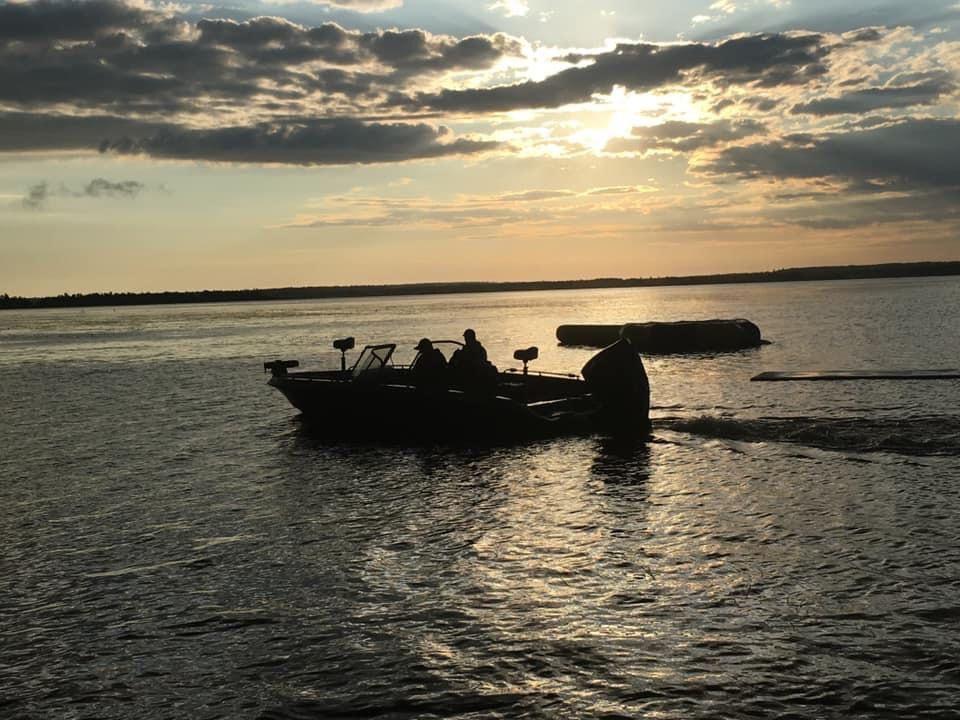 During the pandemic, team members met virtually via Zoom to go over tournament rules. (Photo courtesy of Larry Kriesel)

How to get involved

As some students graduate their boat captains retire with them. As a result, the Owatonna Fishing Team is looking for more boat captains. Responsibilities include driving the boat, helping net and enter fish. The captains are not allowed to help fish and are responsible for maintaining the safety of the team out on the water. If you are interested in volunteering as a boat captain please contact Head Coach Larry Kriesel at 507-676-6686.

Adams Publishing Group has hired a new beat reporter to cover local school districts and the arts for the Owatonna People’s Press.

Ashley Rezachek, of Eagan, stepped into the role on July 15. Rezachek graduated from Minnesota State University Moorhead in May 2019 with degrees in multimedia journalism and biochemistry/biotechnology. With a passion for learning, Rezachek said her biggest career goal is to use her communication skills to interpret complex topics and ideas so that everyone can understand.

“I have a passion for news and a passion for the truth.” Rezachek said. “I love learning, and if I could be a full-time student and get paid that would be the perfect job. I feel being a reporter is the closest thing I can get to that.”

Rezachek has been exploring the world of media for the last several years, with experience managing her college’s radio station and copy editing for the student newspaper. Most recently, Rezachek worked as a general reporter at RiverTowns Multimedia in Red Wing, where she covered government boards, the local school district, and a variety of community interests for the biweekly publication, Republican Eagle, as well as the weekly publication, Hastings Star Gazette.

“We were fortunate to find a journalist of Ashley’s caliber when filling the People’s Press reporter’s position,” said Regional Managing Editor Suzanne Rook. “Ashley’s got a reporter’s innate curiosity, but a science background that helps her sort and understand information. Both will be key as she ventures out to meet and see the wonderful people and places in Steele County.”

Ideally, Rezachek said she hopes to combine her passion for journalism with her equally deep passion for science to help encourage the general public to engage in the science world.

“I have a strong passion for the environment, conservation and sustainability,” Rezachek said. Because of her love of nature, she said she is also looking forward to exploring the notable park system in Owatonna.

Between the ongoing COVID-19 pandemic and the continuing rise of social media, Rezachek said that the news has never been more important in helping form the public’s worldview.

“False information has a tendency to spread which can lead to trouble,” Rezachek said about social media. “It is crucial for society’s development to hold those with power and those who are in charge accountable. Truth is important.”

Rezacheck will be reporting on the local school districts within Steele County, the government and local happenings of Blooming Prairie, arts/entertainment, human interest pieces and other general reporting assignments. She will also be writing features for the Saturday lifestyle edition. 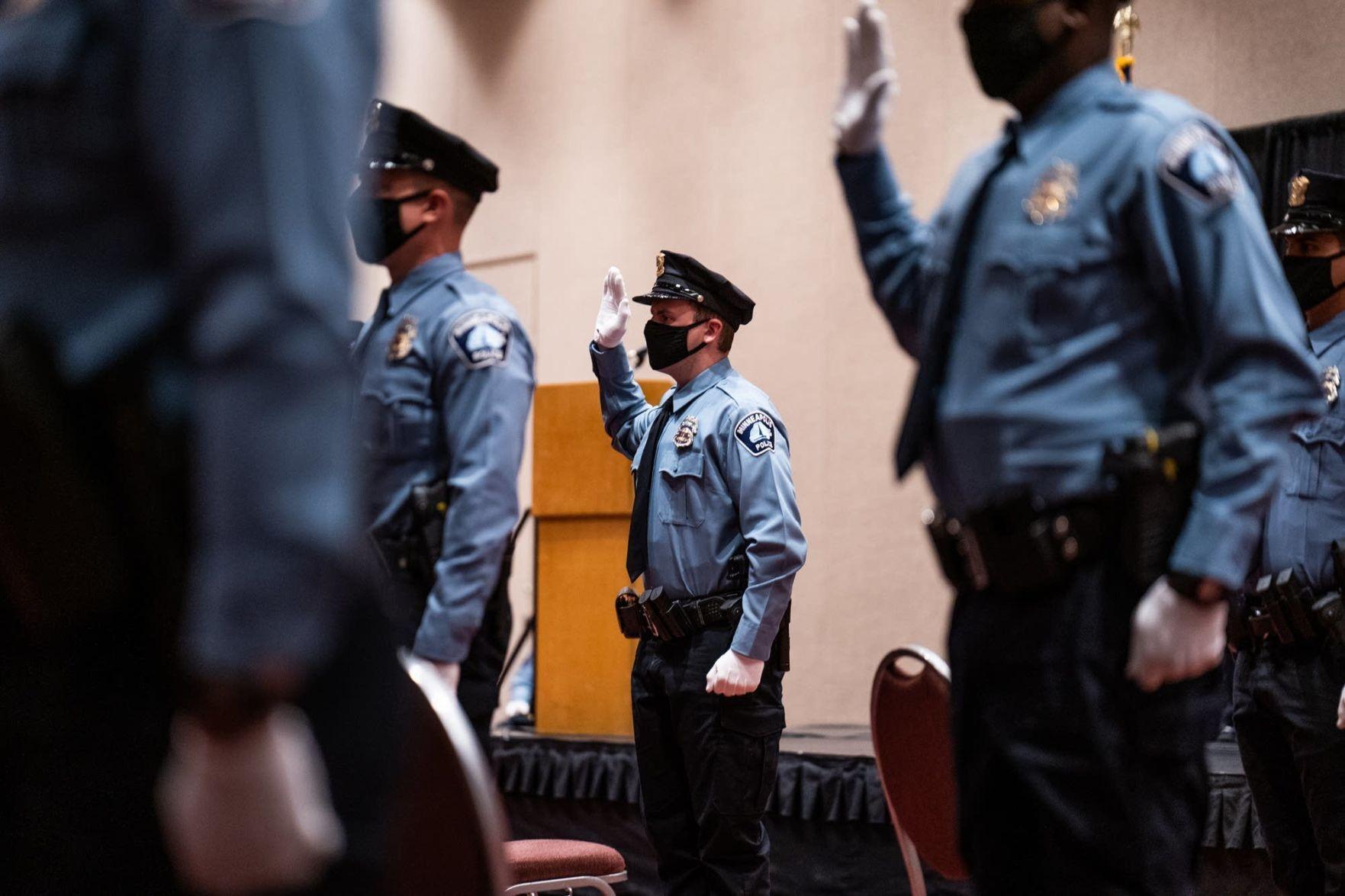 Growth is ongoing in Owatonna’s industrial park, this time with an already well-established company of nearly 40 years.

Cybex International, the largest vertically integrated fitness equipment manufacturing facility in the country, will expand production within the next year as the parent-company Life Fitness relocates cardiovascular manufacturing and assembly operations to Owatonna. The operations currently take place in Franklin, Illinois, and the public relations manager for Life Fitness said that relocation initiative will improve efficiency to better serve customers.

“During this time, we are working closely with the union that represents our manufacturing employees in Franklin Park to ensure the best possible transition for impacted employees,” said Dana Andreoli. “We are also offering these employees the opportunity to relocate to Owatonna.”

Andreoli said a total of 150 new job opportunities will open up in Owatonna as a result of the transition. The jobs will range from salaried positions in engineering and purchasing to hourly positions in assembly and maintenance.

While the transition will add to the 285 employees currently located at the Owatonna facility, Andreoli said that there are no current plans to add to the building that was recently expanded by 150,000 square-feet in 2017, bringing the total footprint to 490,000 square-feet.

“This expansion also included an investment in automation and technology, which increased the facility’s overall manufacturing capacity to support the continued growth of the fitness industry,” Andreoli said. “The decision to relocate out manufacturing operations to Owatonna was made because this is our largest, most recently renovated and least utilized domestic facility. It has the necessary space and capacity to add assembly lines to create a vertically integrated cardio production facility.”

Andreoli said that the partnership with the city of Owatonna in developing a business-friendly environment also played into the decision to increase operations at the local Cybex facility.

“We have a strong history of working together as we’ve expanded our operations here,” Andreoli said.

The increase in jobs remains on trend for Owatonna in the last year, as companies such as Costco and Minimizer announced in 2019 they would be moving to the city’s industrial park. Rise Modular also opened a facility in Owatonna last year, and Daikin recently finished an expansion to their existing facility.