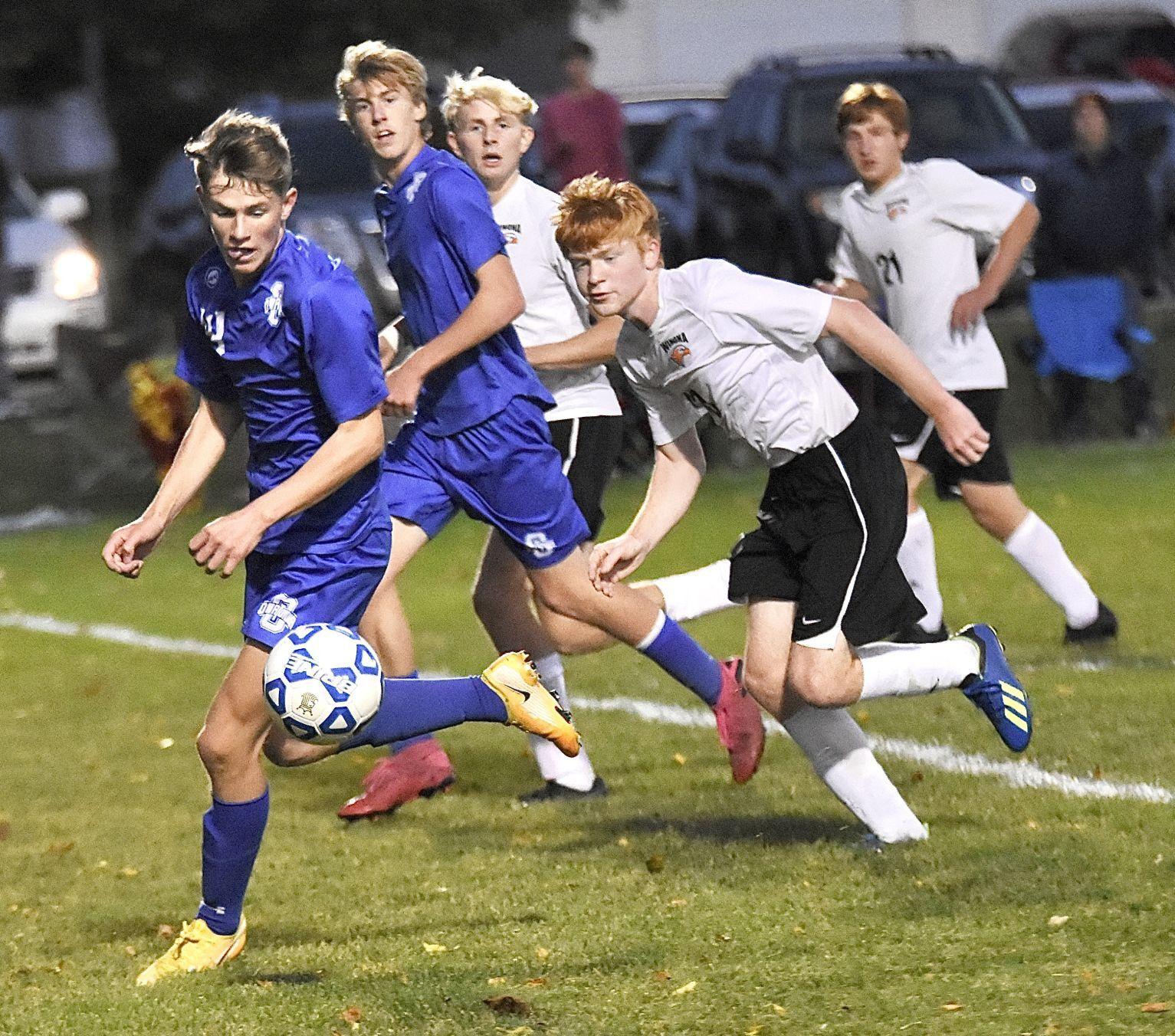 Owatonna sophomore Ty Svenby (14) leads a fast break against Winona ahead of teammate Alex Ulrich and a trio of Winhawk defenders on Tuesday night at the Owatonna Soccer Complex. (Jon Weisbrod/SouthernMinn.com)

It’s not uncommon for law enforcement agencies to request mutual aid when an event calls for more than their capacity.

The Owatonna Police Department answered the call to assist with security during President Donald Trump’s rally in Bemidji on Sept. 18, sending four officers at a total cost of $3,733.

“Minnesota law enforcement agencies are mostly independent service providers for their respective communities,” Owatonna Police Chief Keith Hiller said. “They are mindful that a teamwork response is necessary during daily tasks and operations. This collaborative approach is even more pronounced during operations that require a large police presence.”

The Steele County Sheriff’s Office did not respond to the mutual aid request for the President’s rally. Sheriff Lon Thiele said the request was too far north and would have taken deputies away during a time when resources are already tapped.

“We need to concentrate on Steele County,” Thiele said.

Hiller said while the request from Bemidji is one of the farthest for the Owatonna Police Department, they were only able to help fulfill the request because they had the ability and manpower to do so at that time.

“The safety and security of our community is always at the forefront of our decision making process,” Hiller said. “At times, our staffing and/or activity levels do not allow us to support or assist other communities.”

For the rally, Owatonna officers Joel Hunt, Travis Johnson, Nathan Heeren, and Josh Lee spent 22 hours assisting the local law enforcement with traffic control around the perimeter of the Bemidji airport and preventing traffic from stopping within the exclusion zone. The Owatonna Police Department’s costs were related to personnel, meals and fuel, according to Hiller.

Law enforcement agencies responding to a request for mutual aid typically don’t ask to be reimbursed by the agency requesting the assistance, instead being “paid back during their time of need,” Hiller said.

Since Dec. 7, 2016, the OPD has assisted other agencies 1,601 times. Some of those requests have been events that few agencies were adequately staffed to solely respond, including the Super Bowl, protests throughout the state and presidential visits, Hiller said. The OPD is often asked to help investigate cases where another agency has a conflict of interest and the agency assists can range from formal collaboration, such as an OPD detective being assigned to the Minnesota Human Trafficking Investigators Task Force during the NCAA Final Four Tournament in the Twin Cities, to daily tasks of traffic accidents and high speed pursuits, Hiller said.

Both OPD and SCSO have also benefited from mutual aid requests. In the beginning of June, more than 100 law enforcement officers from a variety of police departments and sheriff’s offices came to Owatonna to help safely respond to planned protests in support of the Black Lives Matter movement, according to Hiller.

News
spotlight
A new future for a society that preserves the past
By ASHLEY REZACHEK ashley.rezachek@apgsomn.com

Kellen Hinrichsen started his first day as Executive Director of the Steele County Historical Society on Monday. He says he’s received a warm welcome from the Steele County community. He is most looking forward to getting to know the community and for winter time because the society hosts Christmas in the Village. (Ashley Rezachek/southernminn.com)

Kellen Hinrichsen, a self-described “history nerd,” is looking forward to sharing his passion for history with Steele County residents.

Hinrichsen began as the new executive director of the Steele County Historical Society on Monday. As director, he will manage staff, build relationships with the community, organize fundraisers and work on the society’s public relations. He will be responsible for guiding the center forward using the society’s strategic plan.

“I want to form and expand upon relationships that we already have with businesses and local organizations and other cultural institutions in the area and region,” Hinrichsen said.

He says his interest in historical objects for and preparing them for collection storage drew him to museums in the first place. In graduate school, he trained in curating exhibits to engage the public.

“I think for the longest time, people viewed museums as ... old repositories for the past and it’s kind of shut off and not accessible. I want to change that, because what we have is very interesting,” he said.

Throughout his career and time in school, Hinrichsen has served as a museum assistant at the University of Denver Museum of Anthropology, the Molly Brown House Museum, the Denver Botanic Gardens, as well as museum manager at the Amache Historical Society Museum in Granada, Colorado and the Dallas Holocaust Museum, according to the Steele County Historical Society.

Prior to his new role in Owatonna, Hinrichsen served as the director of the Warren County Historical Society in Monmouth, Illinois. He was the museum’s first paid employee, essentially building the society from the ground up for the last five years, he said. Wanting to see where else he could take his career and feeling like he had taken the Warren County Historical Society to a good place, Hinrichsen wanted to take his next career step. He discovered the available position in Steele County.

A committee of four people interviewed and selected candidates for the position. Ryan Gillespie, Joanne Giga, Janet Mealey and Jerry Ganfield, all members of the Steele County Historical Society Board of Directors, began the process in December. Ganfield is the current treasurer and was serving as the society’s interim director prior to Hinrichsen’s arrival.

“He probably has more museum experience, the different phases of collections and curatorship and management in a nonprofit than many of the candidates had,” Ganfield said. He added that Hinrichsen is an excellent fit for the historical society.

Ganfield said the committee had set up some interviews prior to the shutdown, but eventually they had to host their initial interviews via Zoom. Candidates that met the committee’s qualifications were asked for a second interview. Looking for someone who could build goodwill for the society, the committee selected Hinrichsen.

“He knew what he was talking about; he had experience at various other museums,” Ganfield said.

Hinrichsen is still in the process of becoming acquainted with the organization, the buildings and collections. He said he hopes to get outside of the history center’s walls and interact with the community, get people excited about local history and make the center a fun place to visit.

“We hope to introduce him to the community with a meet-and-greet at some point,” Ganfield said.

Residents have already started stopping by the center to say hello. He says the community has given him the warmest welcome, adding that he and his family — wife Megan and 15-month-old son Lars — already feel at home in Owatonna.

“You’re all living up to the Minnesota Nice thing,” he said. 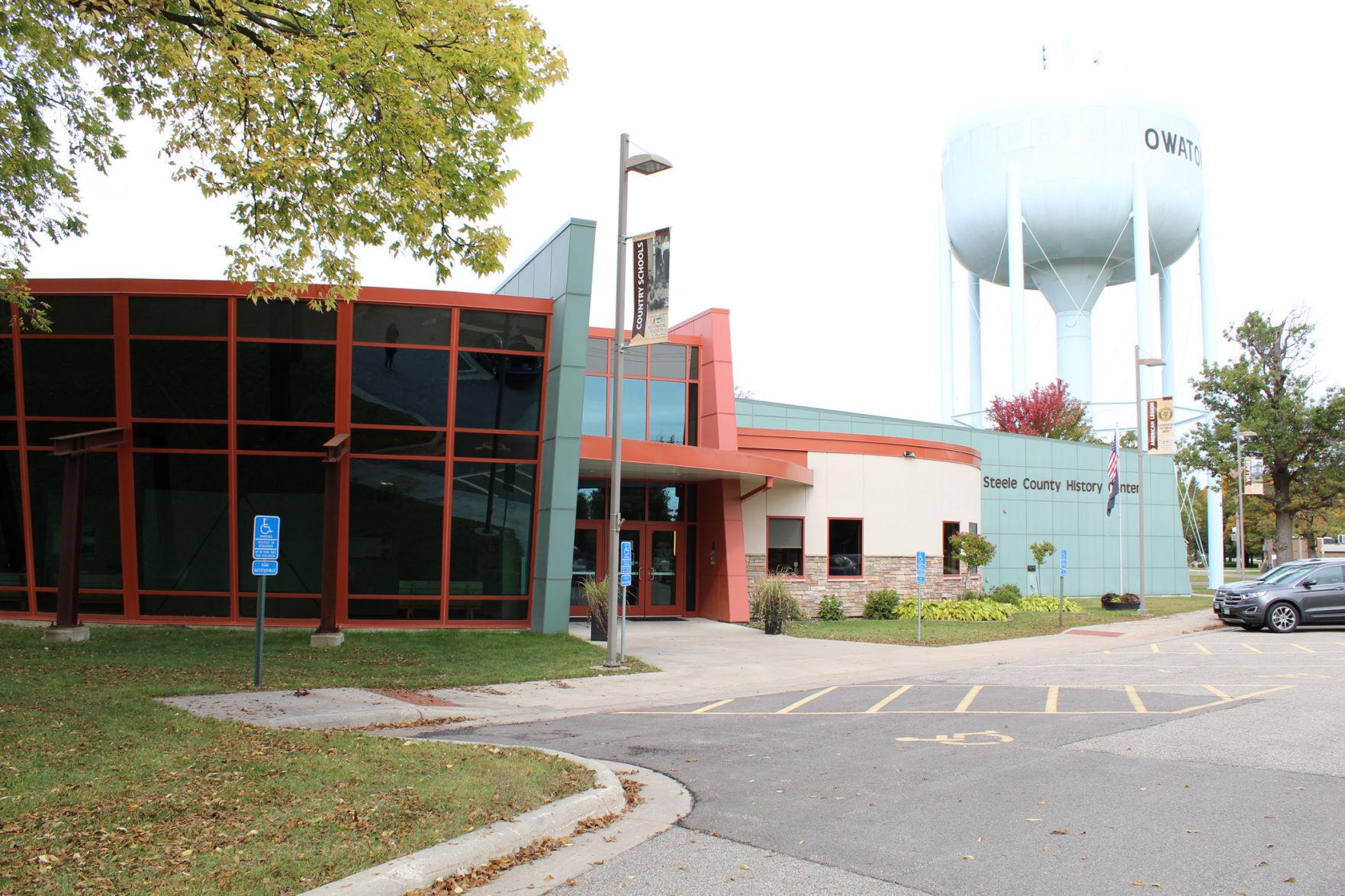 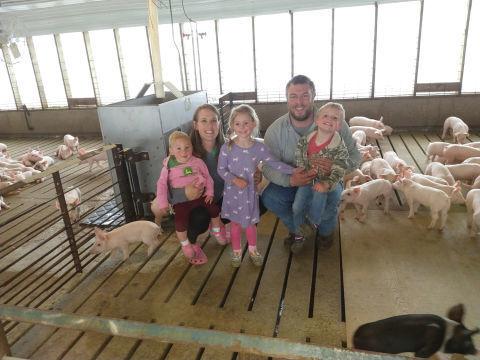 Todd and Meghan Selvik, shown here with their children during better times. Meat plant closures created a no-win situation for farmers, meat plant workers and businesses that rely on all of them. (Photo courtesy of University of Minnesota Extension)

News
spotlight
OPU offers to help those in need during COVID-19
By ANNIE GRANLUND annie.granlund@apgsomn.com

The Owatonna Public Utilities Commission’s plan to use federal COVID-19 funding to help customers during the pandemic was defeated before it began, but the commission is still interested in working with residents facing past due payments.

The commission originally planned to use the federal Coronavirus Aid, Relief, and Economic Security (CARES) Act funding to provide a credit on bills for customers who had been laid off or had their hours reduced, according to CEO and General Manager Roger Warehime.

The commission approved of dispersing up to $100,000 of the city’s CARES Act funding in the form of grants to the residential OPU customers and sent the request to the city. But ultimately, the city’s attorney and consultant determined the grant program didn’t align with the federal requirements for the funding and could ultimately result in the city having to pay back those funds.

“The prohibitions around using CARES funding is that it cannot be used to make up for lost government revenue,” Warehime said. “To me that is taxes and utilities are a different thing, but in the end we just couldn’t make it work.”

However, it does not appear that many of OPU’s residential customers are struggling to make payments due to COVID-19, Warehime said. The utilities company has been making additional outbound calls to check in on customers and Warehime said he feels confident that most are in good standing.

“We are not seeing a huge increase in past-due amounts,” Warehime said. “But we will always try to find whatever we can for our customers and find whatever programs that come around to help them. This one would have just been unique because we would be doing the program ourselves.”

If residents are experiencing hardships paying their utility bills, Warehime encourages them to call customer service to review their options. He said these could range from statewide programs to figuring out a different payment plan.

“Sometimes we have customers who aren’t paying their bill because they can’t pay the whole amount,” Warehime said. “We would be happy to work with them to figure out how much they can pay so they don’t get further behind.”

In other news from OPU, a 16-year-old joint service agreement has been dissolved between the company and Steele Waseca Coop that won’t cause a disruption or changes to customers living in the impacted area, located on the north part of town between Cedar Avenue and St. Paul Road. When city limits expanded in 2004 and a new development was constructed in what was once a Steele Waseca Coop territory, the two electric companies developed a unique agreement where OPU would make small, indefinite payments to the other company. Warehime said this agreement was untraditional and that usually in these situations one company would simply buy out the other and pay for revenue loss of up to 10 years. Both companies agreed it was time to clean up the agreement, and OPU bought the Coop out.