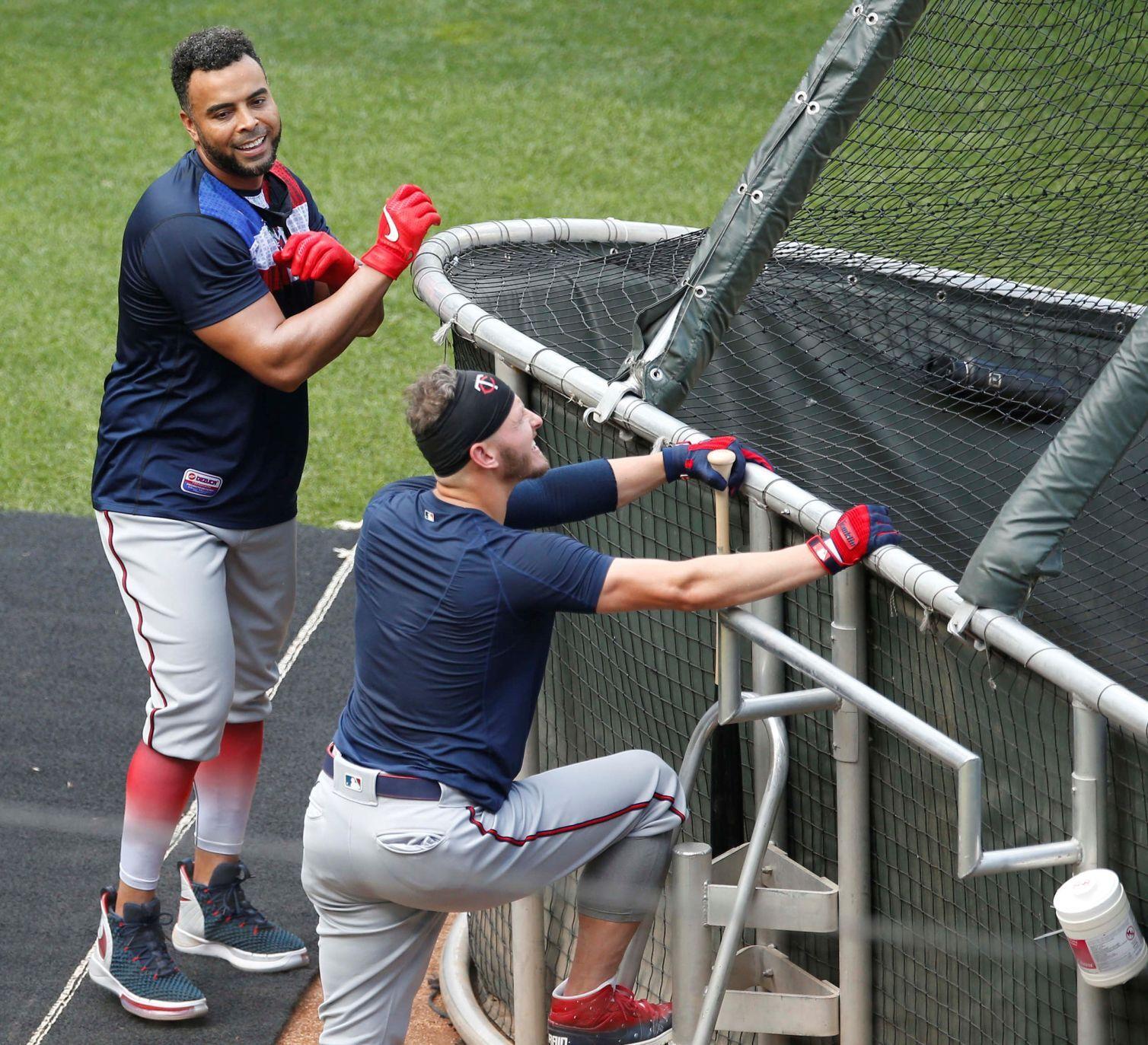 Deputies Caleb Buck and Willow are bringing the K-9 project back to the Steele County Sheriff’s Office. The dog was purchased by using donations from the community. Buck brought Willow to Owatonna Thursday and expects to begin tracking and narcotics detection training in the fall. (Annie Granlund/People’s Press)

The Steele County Sheriff’s Office has a new deputy on board, and she has a real nose for justice.

After nine months of aggressive community fundraising, the Sheriff’s Office has been able to bring back the K-9 program. On Thursday, a 2-year-old German shepherd named Willow came home with Deputy Caleb Buck to begin her journey as a member of the force. Buck will be her handler.

“She fits right in with the family,” said Buck, a three-year veteran with the Sheriff’s Office, as Willow explored her surroundings outside the Law Enforcement Center in Owatonna. “We’re still working on things and she is still learning to figure out what I want her to do, but we start training in the fall.”

Buck said that he always thought he would enjoy being a K-9 handler, but was unsure if and when he would ever get that opportunity. In November, Sheriff Lon Thiele selected Buck to be the next K-9 handler when he began soliciting help from the public to bring the program back to life. Thiele noted that Buck had a true passion for the program as well as a commitment to the responsibilities of being a K-9 cop.

Since then, the Sheriff’s Office has received approximately $31,000 in donations from individuals and businesses within Steele County.

“I didn’t expect to make the money so fast, this really speaks to the volume of support we have in this community,” said Thiele. “This has been amazing, and hats off to Deputy Buck for helping raise the funds.”

The fundraising began in November with a total of $2,550 donations from a variety of local organizations and businesses. Less than two weeks later, a surprising and gift helped accelerate the project when anonymous donation of $15,000 came from a single individual.

“That was an exceptional gift, but we don’t want to forget about any of the people and businesses and organizations who donated money to us,” Thiele said. “Large and small – every dollar was appreciated. We wouldn’t have been able to move forward without the community we have.”

Initially, Thiele said that the goal was to raise $20,000 and use a forfeited vehicle that would be outfitted as the new K-9 squad car.

“$20,000 may have been our goal, but I knew the cost would actually be anywhere from $30,000 to $32,000, so we had some other dollars to offset that last bit if need be,” Thiele said. The K-9 project was not a part of the 2020 budget for the SCSO, but through the community donations Thiele said his office will need little to supplement what it already has in hand.

Re-establishing a K-9 unit within the Sheriff’s Office was a heavily discussed topic during the 2018 sheriff’s race, where Thiele was challenged by Deputy Darrin Helget for the top law enforcement job in the county. Thiele won by a 7% margin, but took note of his opposition’s priorities: specifically the K-9 unit.

“We couldn’t pursue a K-9 at the time because of other priority with budgeting, and honestly we still can’t as everyone is trying to cut and slim down,” Thiele said. “They only way were have been able to succeed with this project is because of the donations from our community.”

The Owatonna Police Department also brought its K-9 program back to life in January after a two-year hiatus. Officer Casey Martin is the handler for Vegas, a German shepherd also from Slovakia.

Willow was procured through Performance Kennels, a business based out of Buffalo, Minnesota, that provides police service dogs that are hand selected from eastern Europe. Willow comes from Slovakia, where Performance Kennels says the best bloodline of law enforcement dogs hails from.

Willow will specialize in tracking and narcotics, and while she won’t be an apprehension dog she will train in different tactics to subdue suspects. Buck and Willow begin their 10-12 week training course this fall.

'I didn’t expect to make the money so fast, this really speaks to the volume of support we have in this community. This has been amazing, and hats off to Deputy Buck for helping raise the funds.'

Jazz enthusiasts can rock out at the annual Jazz Jam on the Patio from 2-4 p.m. this Sunday, July 19.

H3O Jazz Trio will provide free entertainment to local music-lovers and the public. Attendees are invited to bring their own instrument to join in the socially distanced fun located at the Steele County History Center’s patio.

The Winona-based trio also features Heukeshoven’s sons, Hans and Max. Eric is the afternoon’s keyboardist, Hans the percussionist and Max on bass.

The musically inclined family have been playing together for close to 10 years. Heukeshoven is a music professor at Saint Mary’s University of Minnesota and has been playing professionally for almost 50 years. His sons graduated from college with music degrees.

“As a gig musician all my life it’s been really tough, not just on us as players not being able to play, but I think tough on people who just want to get out and have some freedom. I think this is a great way to do that because it’s a really nice big open space,” Heukeshoven said.

The Historical Society was forced to reschedule the event when the pandemic hit, according to Heukeshoven. He is glad they are finally able to perform.

“I’m looking forward to seeing people within our community coming and having a lovely afternoon and listening to some good music,” Volunteer Tours and Events Coordinator at the History Center, MaryAnne Higgins said.

The society asks that people bring their own lawn chairs to spread out to accommodate social distance restrictions. Amplification will be used to ensure visitors will be able to hear the trio. Hand sanitizer will be available and other precautions will be taken at the event according to Higgins. 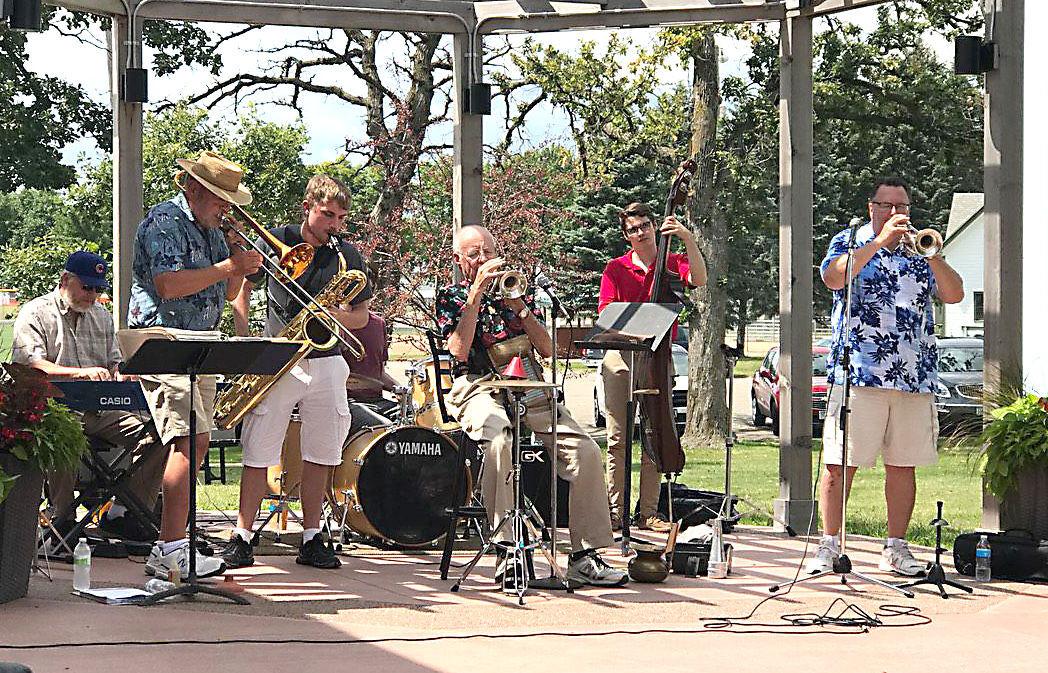 H3O jamming with Ken Bloom on trombone, Trent Spantenka on bari sax, Les Fields and Tim Klinkner on trumpet from the Jazz Jam on the Patio event from 2018. (Photo courtesy of Eric Heukeshoven)

Attendees can expect to hear a variety of jazz styles, including music from the swing era and the 60s as well as some original pieces.

“We wanted to find groups that play a variety of music,” Higgins said when asked why H3O Jazz Trio was selected to perform.

Heukeshoven says music will be available for people that bring their instruments. Trombone player John Sievers will be the afternoon’s special guest. Other guests include Heukeshoven’s wife on the flute. During previous Jazz Jams Owatonna resident — Trent Spantenka — would make an appearance with his baritone sax.

“It’s a time for people to come and enjoy the outdoors and listen,” Heukeshoven said.

Jazz on the Patio

Beverages will be available for purchase on site, including beer, wine, pop and water. Bring your own lawn chair.