Mert Grabau, 93, is retiring after 73 years as a church organist, most recently at Redeemer Lutheran Church in Owatonna. He was also a fifth-grade teacher in Owatonna from 1967 until his retirement in 1989. (Lisa Kaczke/Southernminn.com)

The first time he played the organ for an entire church service, Mert Grabau had to play an old organ that was raised slightly above the front of the congregation.

“That was scary,” he said. “It squeaked and squawked once in a while.”

Grabau, 93, played the organ at churches in Nebraska for 16 years, then in Colorado for 10 years before he and his wife Irma moved to Owatonna in 1967. He most recently was the organist at Redeemer Lutheran Church, where he also oversaw the choir. He also played the organ at weddings and funerals and filled in for churches needing an organist. He estimates that he has played at 17 churches in the Steele County area over the years.

“At least we knew where we’d be on a Sunday,” he said.

After 73 years of playing the church organ, Mert decided that it’s time to retire. A reception to honor Mert and Irma is scheduled for 10:15 a.m. Sunday at Redeemer Lutheran Church, 1054 Truman Ave., Owatonna. A short musical celebration featuring organist Gloria Kenow will follow the reception. COVID-19 precautions of wearing a mask and social distancing will take place.

He said he’ll miss it, but he’ll continue to play from time to time and has an organ at their home. When he was a child growing up on a farm in Nebraska, his mother would show him the keys on the old reed organ they had.

He knew he wanted to teach in a parochial school and they usually wanted someone who could also play the organ, he said. He took organ classes at Concordia University in Nebraska, which included playing a hymn at a chapel service once a semester. It was nerve wracking to play in front of dozens of his fellow organ students, he said.

His first job was teaching 32 students in eight grades at a one-room Lutheran parochial school in Nebraska. He then moved to a bigger school in Colorado before coming to Owatonna, where he taught fifth grade until he retired in 1989.

In each location, he and Irma would look for a church that had an organ. Redeemer Lutheran Church had a small, old organ when he first began to play for the church services and then it brought in a new pipe organ four years after he became the organist, he said.

“Sixty-nine of these 73 years, I’ve been listening to him,” Irma said.

Irma plays the piano and they sometimes play duets or she accompanies him while he sings. Irma also fills in for Mert playing the organ while he receives Communion during church services.

Mert enjoys hearing the support of the congregation singing as he plays.

“When you’re playing, you’re leading the congregation in their singing and you feel like a guy that’s driving a tractor on the farm. That machinery is going along behind him because he’s in charge and driving the tractor,” he said.

A reception will be held for Mert and Irma Grabau to celebrate Mert's 73 years playing the church organ.

Steele County had an increase of 30 new COVID-19 cases in a 24-hour period on Friday, the same amount that it usually has in an entire week.

The increase on Friday comes after the county had an increase of 68 cases last week, Steele County Public Health Director Amy Caron said.

“This is very concerning, especially as we head into the colder winter months,” Caron said.

Minnesota reported 2,297 new COVID-19 cases on Friday, a new record for the state. Minnesota Health Commissioner Jan Malcom called it a “very, very sobering number” during a media briefing Friday. While she said she’s “deeply worried” about Friday’s increase, she wasn’t surprised by it. She added that the number of new cases on Friday wasn’t due to a backlog in test results being reported or a specific event.

Minnesota has had daily increases of more than 1,000 cases for 12 of the past 16 days, she said. The state is also seeing an increase in hospitalizations, she said.

Steele County had 703 confirmed COVID-19 cases as of Friday, 570 of which are no longer needing isolation, according to the county. Two Steele County residents were hospitalized with COVID-19 as of Friday and the county’s death toll remained at two.

The increasing number of cases in Steele County is largely due to community spread and a majority of the people who have tested positive lately are in their 20s, 30s and 40s, Caron said.

The county has also had an increase in the number of people testing positive who are asymptomatic, she said. That typically occurs when a person is tested because they were a close contact of a positive case or is being tested before a minor medical procedure or surgery. Testing events in Waseca and Rice counties lately have also contributed to the increase in asymptomatic people testing positive, she said.

Steele County health officials knew community spread was occurring, but the cases involving asymptomatic people lately is a “red flag,” she said. She said her department has received complaints about staff and customers not wearing masks or social distancing while in businesses in the county.

“That’s some of our only defenses,” she said.

She urged residents to remain in quarantine, even if they are asymptomatic or waiting to find out test results. She noted that people are leaving quarantine, which then can infect more people.

She also encourages residents to answer the phone if the Minnesota Department of Health or Steele County Public Health is calling. The agencies are either calling to notify the person that they’re a close contact with a positive case or are doing a case investigation for close contacts of a positive case, she said.

School districts’ learning model is based on the county’s case rate, the county’s positivity rate and what is occurring in the school building. She said they want to be cautious in transitioning between distance learning, in-person or a hybrid because it’s difficult to transition for families and school staff, but if the county continues on the trend it’s currently on, schools may have to move to a different learning model, she said. 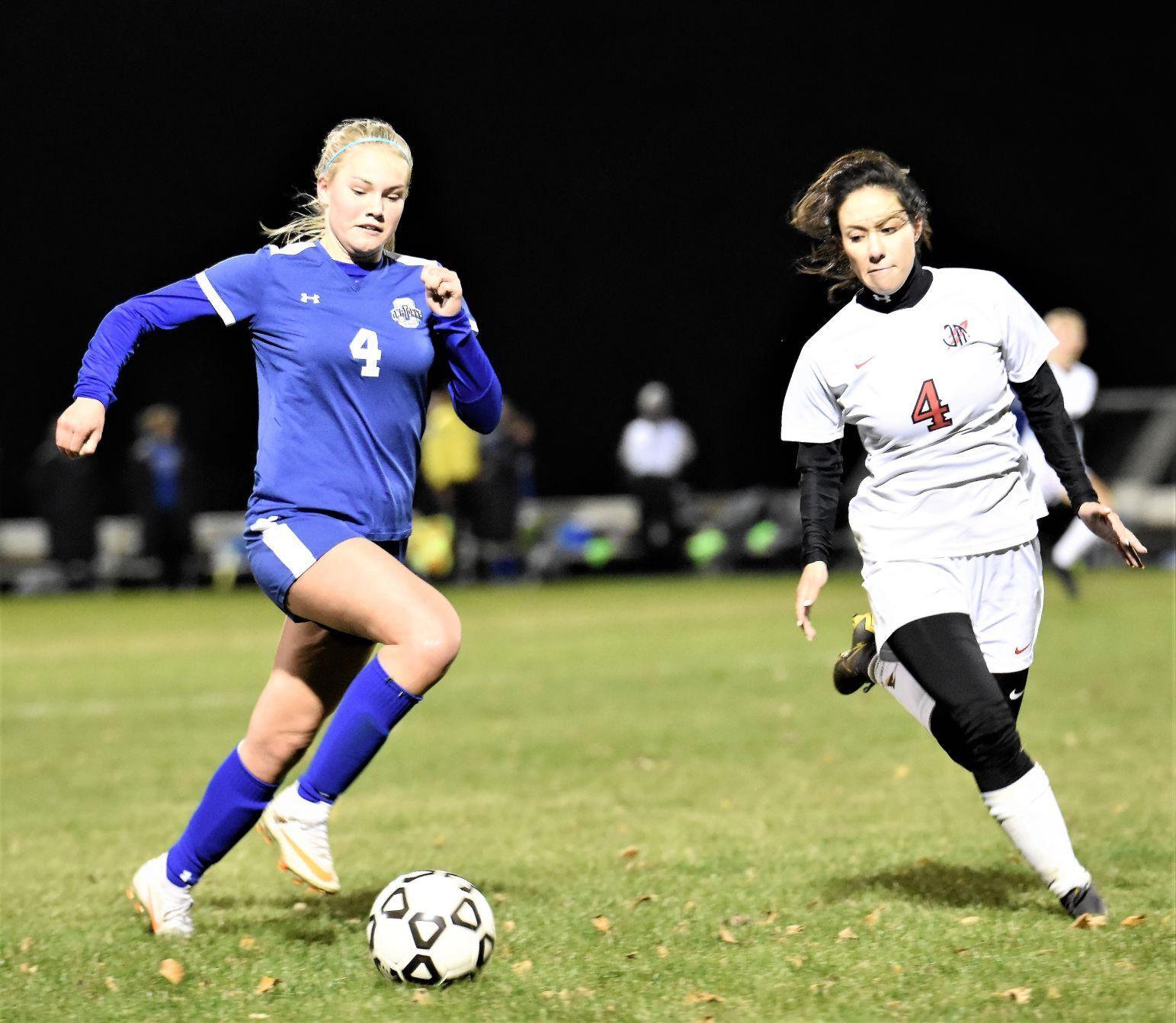 Owatonna's Ezra Oien (left), seen here racing after a ball alongside Rochester John Marshall's Sierra Pieper, scored the game-winning goal in the Huskies' 2-1 victory over the Rockets in the opening round of the Section 1-AA tournament on Thursday. (Jon Weisbrod/SouthernMinn.com)

Blooming Prairie Police Chief Greg Skillestad is appealing to the state to review a job performance evaluation that determined he is largely not meeting expectations because he believes it wasn’t a fair assessment of his skills.

Skillestad was put on a performance improvement plan in June after City Administrator Andrew Langholz found Skillestad wasn’t meeting expectations in six of the nine job-related categories during an annual review, according to a redacted version of the review obtained by the People’s Press via a Minnesota Data Practices Act request. The performance review also served as a written reprimand of Skillestad.

Skillestad met expectations for public service/customer focus, recordkeeping and financial/data accuracy, and safety; performed at below normal expectations for attendance and punctuality, job knowledge/performance, productivity and work organization, initiative and commitment; and was deficient in leadership and communications, according to the performance review.

Skillestad needs “a great deal of improvement” to meet normal expectations, Langholz wrote in the review.

“Chief Skillestad creates a tremendous amount of additional work and oversight for City Administration by continually underperforming in his position,” Langholz wrote.

Skillestad is filing an appeal with the Minnesota Department of Administration to have an independent hearing officer decide whether the statements in the performance review are true.

Richard Wylie, a Minneapolis employment attorney representing Skillestad, said Skillestad believes the job performance review paints an “incomplete picture” of him as a police chief. The state agency has the power to direct the city to change or eliminate the records if the statements are found to be false.

“He believes strongly that he was treated unfairly in this process,” Wylie said.

Wylie mailed the appeal about a week ago. The Department of Administration hasn’t yet received it, although it may have arrived at the office and only needs to be processed, said Curt Yoakum, the department’s assistant commissioner for communications and planning. Once the state acknowledges it has received the appeal, it will likely see if the two parties can reach a settlement. If that doesn’t occur, it will appoint a hearing officer to the issue, Wylie said.

Skillestad has served as Blooming Prairie’s police chief since 2014.

The appeal to the state follows Skillestad’s unsuccessful attempt to appeal the issue to the Blooming Prairie City Council. In September, the council denied his appeal and upheld the job performance review, performance improvement plan and reprimand after holding a closed session to discuss the issue.

A motion to uphold the performance review and improvement plan, but rescind the written reprimand failed.

Additionally at issue is the Blooming Prairie City Council’s handling of its closed session in September. During the council’s Oct. 12 meeting, Langholz acknowledged the errors made during the September meeting. The proper wording wasn’t used to close the meeting, including stating the specific state law the council was using to close the meeting, instead closing the meeting with the vague description of “personnel discussion.” The council additionally violated the state law when it didn’t name in its motion the person who received the reprimand. The council also acknowledged the mistakes and made the motion again on Oct. 12, but with the correct wording.

Skillestad’s performance improvement plan began on June 19 and will end on Saturday, Oct. 17.

Once it expires, it’ll be signed off that it was completed and become part of Skillestad’s record with the city, according to Langholz.

The objectives Skillestad needed to complete under the improvement plan included “displaying leadership qualities including: accountability, humility, transparency, decision making capabilities, communication and creating a vision for the department,” according to the review.

According to the performance review:

Skillestad communicates with police officers, but “struggles” to communicate effectively with the city administration. There are issues with cooperation when implementing plans and policies with staff outside his department.

He has “energizing optimism” when speaking to the public and understands the role of a community-oriented service.

He is regular and consistent with his attendance and punctuality, but he has “difficulties completing tasks that are assigned to him that require critical thinking skills.”

He is knowledgeable about police work and keeps informed of emerging issues in the field, but he doesn’t leverage all the resources he has available to the department.

He has a genuine interest in the organization, but struggles to find the balance between ensuring his employees are satisfied and working in the best interest of the city and taxpayers.